Devout citizens strive to take on tycoons with convenience stores

JAKARTA -- Taufan left his petrochemical job in Abu Dhabi just over a year ago to answer what he felt was his true calling. Upon returning home to Jakarta, he invested in 212 Mart, a new Indonesian convenience store chain whose all-Muslim investors say is part of an "economic jihad."

Not to be confused with bloody holy wars waged by terrorist groups against perceived "infidels," supporters of economic jihad say they use the literal meaning of "jihad" in Arabic -- which translates to "striving" or "a meritorious struggle" -- and apply it to business. "I want to invest in a shop that sides more with Muslims, which sells produce by Muslim communities, by our [small businesses]," Taufan, 53, told the Nikkei Asian Review, declining to share his surname.

The aim of this growing movement in the world's most populous Muslim-majority nation is to promote compliance with Shariah -- Islamic law -- and enhance Muslims' economic prowess. For decades, the Indonesian economy has been dominated by those close to power and tycoons of Chinese descent, the latter of whom are typically either Buddhists or Christians. The country's wealth gap remains wide despite some improvement in recent years.

The 212 brand is owned by the 212 Shariah Cooperative. The number in the name is derived from Dec. 2. On that date in 2016, hard-line Muslims rallied in Jakarta against then-Gov. Basuki Tjahaja "Ahok" Purnama, an ethnic Chinese Christian accused of blasphemy against the Quran. Months later, Ahok lost his reelection bid to a rival supported by opposition and conservative Muslim groups. He was also convicted and spent 20 months in prison. 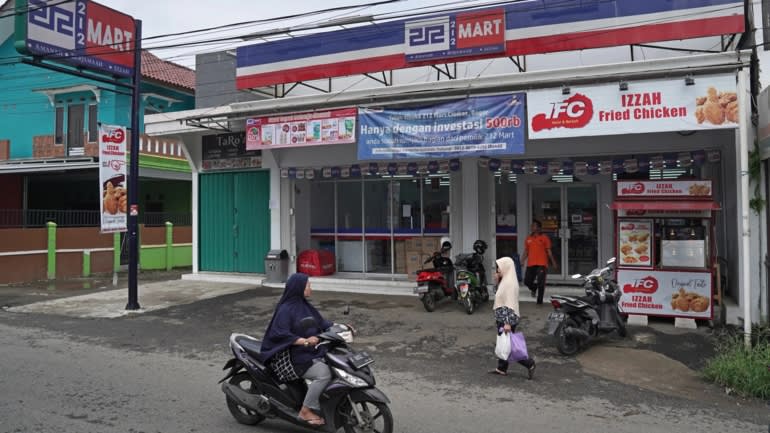 A 212 Mart on the outskirts of Jakarta: The chain does not stock cigarettes, condoms and alcoholic beverages -- all of which its investors see as un-Islamic. (Photo by Dimas Ardian)

Riding on the "positive energy" of the rallies, the cooperative has recruited 57,000 members in three years, collecting a combined 37 billion rupiah, according to Agus Siswanto, deputy head of the organization. Some of the money has gone toward 212 Mart stores, 212-brand mineral water and several fried chicken kiosks. Members have also set up local groups, like Taufan's, to open and run their own 212 Marts.

"Let's strive," Siswanto said. "Let's do jihad to build up Muslims' economic independence, to distribute wealth more evenly. If we hadn't started it now, when would we?"

The shops sell some of the usual convenience store fare -- snacks, beverages and skin-care products from major brands. But they also sell lesser-known brands of mineral water, honey and processed meats sourced from small and mid-size enterprises that have partnered with the 212 Mart chain.

They do not stock cigarettes, condoms or alcoholic beverages -- all of which the investors consider un-Islamic. Taufan's store is one of 252 in the chain. They have popped up in greater Jakarta and other parts of Indonesia since the cooperative launched the business in May 2017. The cooperative's founders consider 212 Marts part of the economic jihad.

Their mission does not resonate with everyone. Some 212 Marts were reportedly closed after they failed to attract customers. Some consumers spoke openly about boycotting the chain over its connection to the protests against Ahok, which they saw as a worrying sign of rising intolerance.

The cooperative admits the anti-Ahok rallies are part of its history but says it is now separate from any political causes. Siswanto stresses the goal is to level the playing field.

"Muslims are the majority here, but they're at the bottom of the pyramid, serving only as consumers and employees," he said in the cooperative's small head office in Sentul, on the outskirts of Jakarta. "Those in the top 20%, [most] are not of the Islamic people, but hold control over our economy."

So far, the term "economic jihad" is only used within limited circles, like 212 cooperative members. But its spirit and principles are slowly gaining traction as Muslims in Indonesia -- a secular democracy -- become more pious.

The shift comes as conservative groups carrying Middle Eastern strands of Islam wield greater social and political influence. Their ideas are challenging the norms established by local Muslim groups with less-rigid teachings. Indonesians call the trend hijrah, derived from another Arabic word that describes Muslims who leave behind secular and hedonistic lifestyles to adhere to religious tenets.

In a recent survey, 80% of Indonesian Muslim respondents said they consider religion "strongly important" in their daily lives, while 19% think it is "important." This is a stark contrast from just 10 years ago, according to Hasanuddin Ali, who leads the Alvara Research Center, which conducted the study. Hijabs for sale are pictured at a stall in the Tanah Abang textile market in Jakarta.   © Reuters

"There is very high religious enthusiasm among our Muslim communities," Ali said. "One of the implementations is in the economic sector. Religious factors are becoming a bigger consideration when people purchase products or services. There had been a supply for those in the past, but not many demands. The demands now are big."

Research on the actual economic impact of all this is scant. Certainly, 212 Mart and smaller Muslim-owned retailers have a long way to go to challenge chains like Alfamart and Indomaret, which are owned by Chinese-Indonesian conglomerates headed by Djoko Susanto and Anthoni Salim, respectively. Each runs around 16,000 stores.

But Ali noted the growing availability of not only halal food and cosmetics but also Islamic schools, travel agencies for pilgrims to Mecca, Shariah-compliant hotels, and other businesses catering to the demands of the devout.

These helped Indonesia rise to fifth place last year from 10th in 2018 in the latest annual State of the Global Islamic Economy Report released by DinarStandard in November. The rankings are determined by factors such as Islamic finance, halal food, travel, fashion, media and recreation, and pharmaceuticals and cosmetics.

The government's approach, however, may not be completely compatible with conservatives' aspirations for the "economic rise of the Islamic people." An organization called Xbank Indonesia highlights the disconnect. The group is a community for employees of banks and other financial institutions who have left or are planning to quit their jobs, due to Islam's prohibition on usury. Founded in July 2017, the group claims to have 25,000 members. It says 11% of them came from banks that are supposed to be Shariah-compliant.

While the government supports Shariah finance, Xbank Chairman El Candra said the group has "found that many practices in Shariah banks are not compliant," based on the experiences of members who have left the banks as well as customers.

Though he said this was "not always" the case at Shariah banks, Xbank's purpose is to help members find new opportunities in sectors that are more in line with Islamic principles. Some end up in new jobs, but many opt to establish their own businesses. The Xbank blog features testimonials from former bankers who now run an online shop, a travel agency and a property developer that helps customers buy houses without taking out a bank loan.

"For us, working in financial institutions that practice usury, it is mandatory to leave the job because what we do is forbidden by Allah," El Candra said. Xbank, he added, also helps members build the spiritual strength they need to sacrifice financial security. 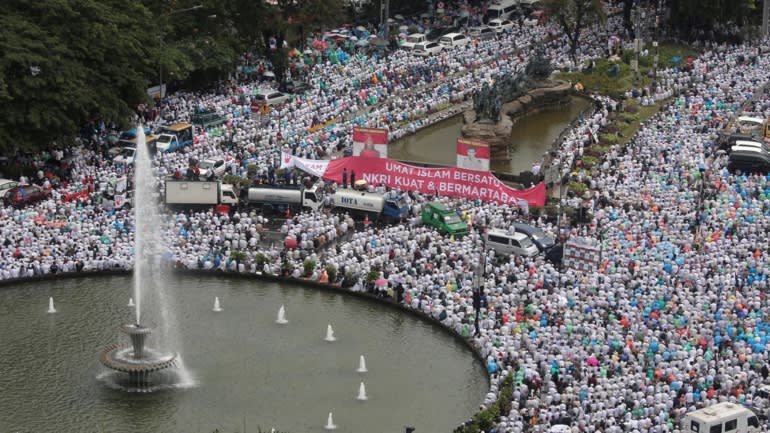 Tens of thousands of Indonesian Muslims pray at a rally calling for the arrest of then Jakarta Gov. Basuki Tjahaja "Ahok" Purnama, who was accused of insulting the Quran, in Jakarta on Dec. 2, 2016.   © Reuters

Indeed, entrepreneurship seems to be the preferred path for many "reborn" Muslims. Alvara's Ali said this is because the Prophet Muhammad himself had been an entrepreneur.

The Indonesian Muslim Entrepreneurs Community, or KPMI, provides basic education and training on Shariah-compliant business practices and financing. It also teaches some mid-size businesses how to export their products. The KPMI now has 48,000 members, including modest apparel designers and sellers, producers of halal cosmetics and pharmaceuticals, as well as Shariah-compliant fintech platforms. It also has 1.2 million Facebook followers.

Unlike some more conservative groups, the KPMI is keen to work with the government. Rachmat Surtanas Marpaung, the organization's chairman, said the government has involved the group in discussions on the development of the Shariah economy. "And we've tried to open communications with the Shariah banking industry" to help members secure financing, Marpaung said.

The burgeoning Islamic market has also attracted fraudsters. In one high-profile case, the husband and wife behind travel agency First Travel were sentenced to 18 to 20 years in prison in 2018 for swindling 63,000 would-be pilgrims to Mecca out of 905 billion rupiah.

"As Muslims, we want to have our own strong business network to empower the Islamic people," Taufan said. "That may sound too utopian, but that's our wish."