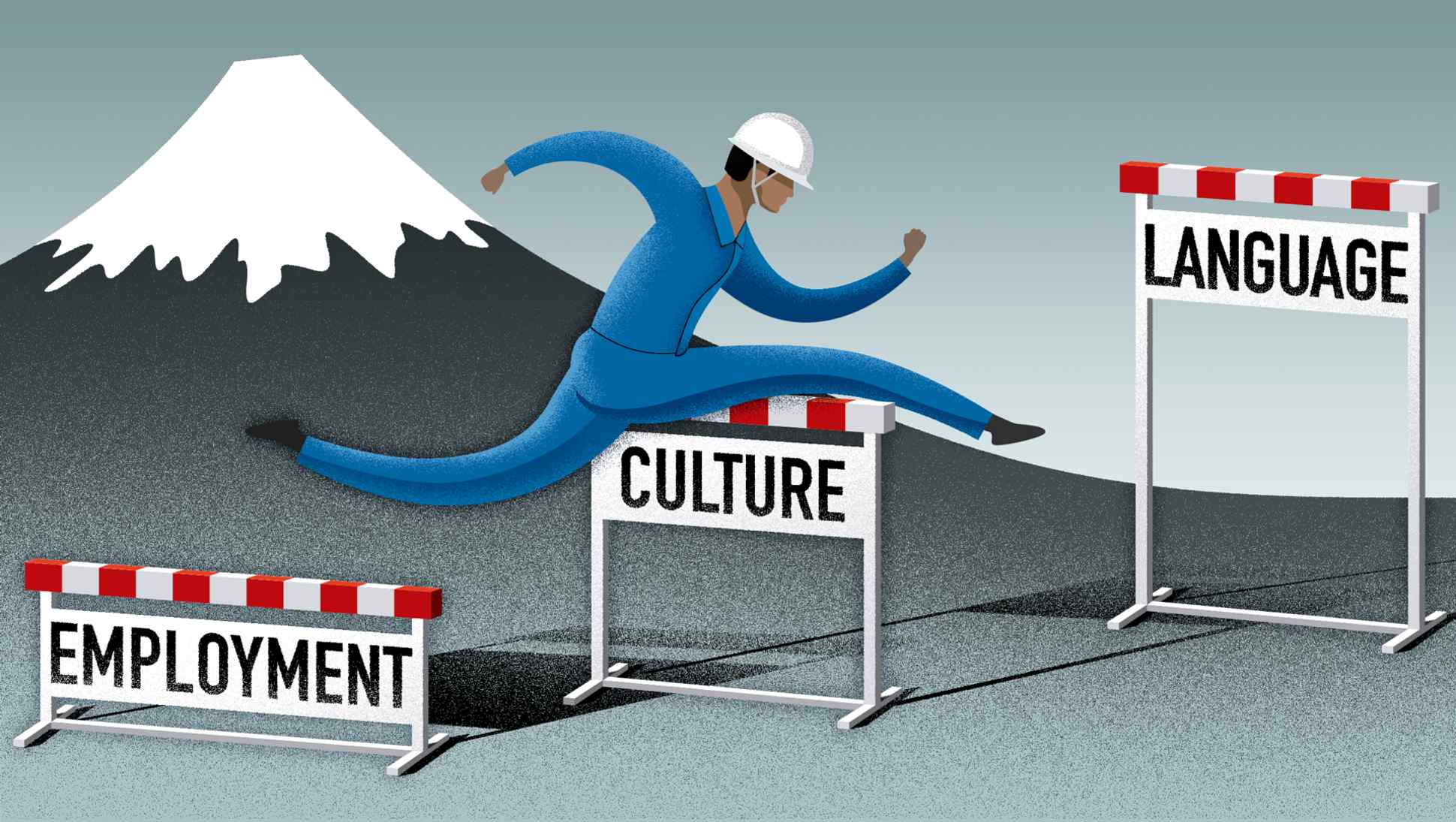 TOKYO -- From the fourth to seventh centuries, immigrants to Japan from the Korean Peninsula and mainland China brought the skills to craft clay pots, produce armor and even establish a legal system. Now, foreign newcomers "are having the greatest impact since that time, entering every corner of local communities," as Waseda University professor Fumio Tanaka put it.

But are the communities ready for them?

That question has become even more important since Japan implemented a law in April to allow over 300,000 foreigners to enter the country and work in labor-starved sectors. The number of non-Japanese residents is expected to rise well above what is already an all-time high of around 2.73 million, or about 2% of the population.

Many newcomers, however, still encounter high hurdles, from learning the intricacies of Japanese corporate culture to overcoming resistance from landlords and understanding what doctors are telling them. If Japan can help them clear these obstacles, it stands to reap economic dividends -- and a number of companies and organizations are lending a helping hand.

Zhong Zifang, a 22-year-old Chinese student in Japan, was caught off-guard when a job recruiter asked him to "promote yourself in 20 seconds."

For the interview, Zhong had been told to "come as you are" and took the advice at face value. But Japanese students know they need to have a brief self-introduction ready, and Zhong regrets being ill-prepared. 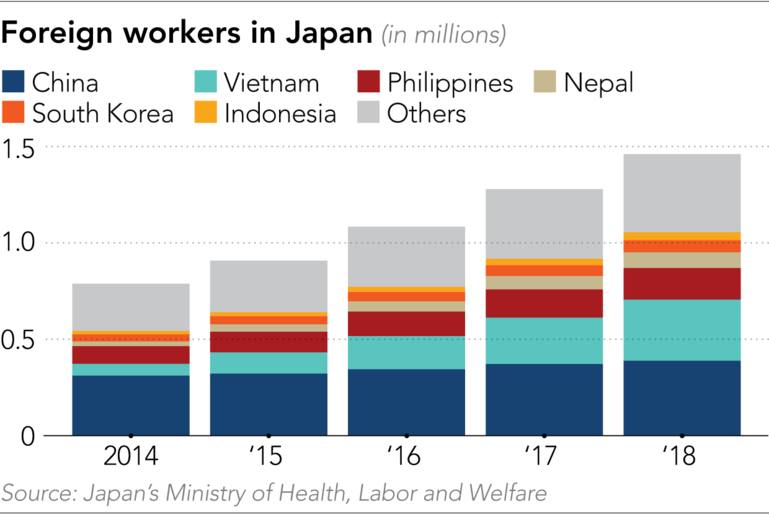 She is not alone. Some students are tripped up by the Japanese hiring system even before the interview stage. Disco, a job information provider, says foreign students land positions at about half the rate of their Japanese peers because of poor results in pre-interview personality and aptitude tests, even if they have passed skills and language examinations.

Some assistance is available. A seminar at the Tokyo Employment Service Center for Foreigners in April sought to prepare young candidates for corporate Japan's annual spring hiring drive.

"Have you analyzed yourselves?" one instructor asked the participants.

As Zhong learned the hard way, students need to talk about their backgrounds, interests and selling points in interviews, as well as the reasons they want to join a particular company. The seminar also offered guidance on how to speak and even sit when meeting with potential employers.

Another problem, however, is corporate Japan's long tradition of hiring new graduates and avoiding older midcareer workers. Richa Sharma, from Nepal, said, "There are just too many companies I can't even apply to because I'm 29 years old."

Still, many Japanese companies know the success of foreign candidates is in their own interest.

"The employment of foreigners stimulates Japanese employees and helps improve productivity," said Takayuki Miyajima, senior economist at the Mizuho Research Institute. The institute estimates that an annual increase of 100,000 foreign workers would raise the Japanese economy's potential growth rate, which stands at around 1%, by 0.1 of a percentage point. 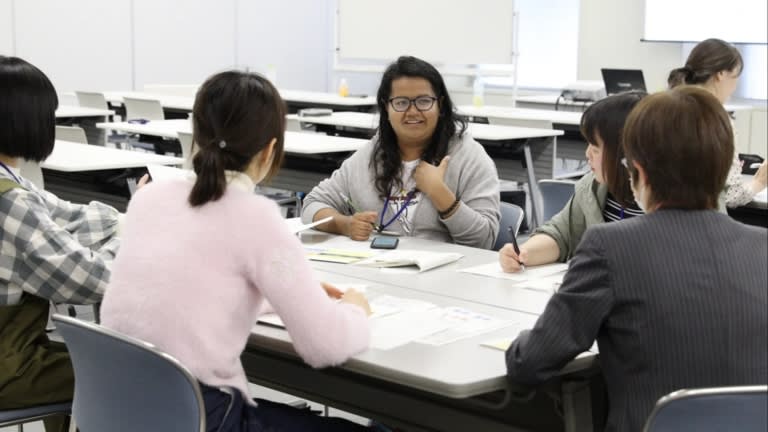 Students participate in a job seminar at the Tokyo Employment Center for Foreign Students in April.

Big companies, too, are actively seeking non-Japanese personnel. Electronics group Panasonic is looking to hire native-level English and Chinese speakers in spring 2020, through application forms and interviews in those languages.

Panasonic in April restructured its U.S. and China businesses to accelerate growth in the world's two largest economies. And while it is hiring locally in both of them, Daisuke Takahashi, Panasonic's recruitment manager, said the company also needs to establish a "dam" of foreign employees in Japan to diversify its workforce.

As more foreign nationals move in, old communities are growing and new ones are sprouting up.

Warabi, in Tokyo's neighboring Saitama Prefecture, has an estimated population of 2,000 Kurds who have nicknamed the city "Warabistan" -- adding the Persian word stan, meaning "nation" or "area."

"Kurds come here as they hear about our large presence," said Tas Tevfik, a Kurd who arrived in Japan about 15 years ago.

Tokyo is home to a number of ethnic communities, including groups from India, Myanmar, the Philippines, Nepal and Vietnam. These pockets have been bolstered by an influx of 600,000 foreign nationals into Japan over the past 10 years alone. 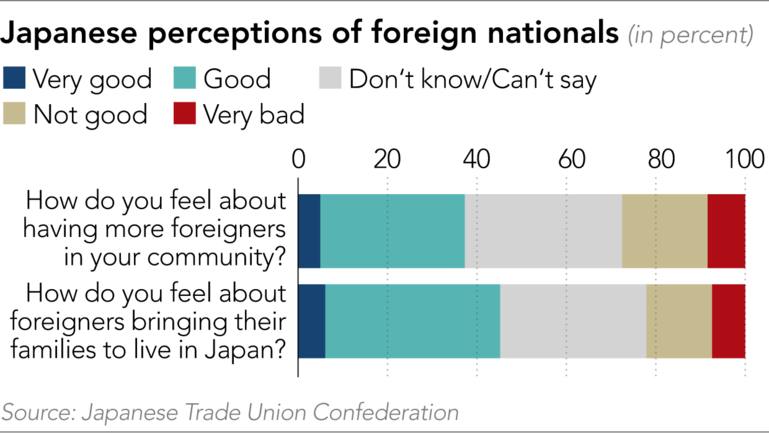 Yet, not all Japanese have come around to the idea of having foreigners as neighbors.

Nearly 30% of respondents to a Japanese Trade Union Confederation survey published last October said they felt either "not good" or "very bad" about having more foreign residents in their community.

Almost 40% said they felt "good" or "very good." But the ratio that answered "very bad" reached 8.4%, exceeding the proportion who said "very good" by 3.4 percentage points.

House-hunting can be a real challenge, as there is a perception among landlords that Japanese tenants tend to leave when foreigners move in. Local real estate offices typically have few apartments available to offer foreign residents.

Companies like Global Trust Networks have found a niche as intermediaries that help new arrivals find a place to live.

Steve Kim from the U.S. signed a lease at GTN's office in Tokyo in mid-April. "I appreciated the company's help with paperwork, including the guarantor procedures, because I cannot read Japanese," he said. 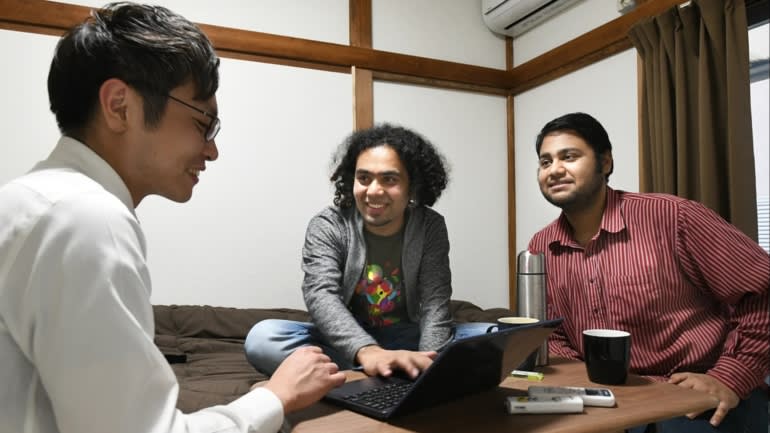 In Hadano, Kanagawa Prefecture, just southwest of Tokyo, four foreign employees of a local warehouse reside in a house originally built more than 30 years ago. Toshimi Tanaka, a Prestate employee, visits the house on a regular basis to talk with the four workers about their jobs and daily life. Tanaka struck up a friendship with one of the workers in particular, a man from Nepal, and they sometimes go out drinking together.

"There was a friend who became homesick and returned to Nepal, but that's different for me," said Paudel Prakas, Tanaka's friend. Prakas married a Japanese woman and will soon leave the company housing to live with her.

While there is a long way to go before foreign residents are fully integrated into Japanese society, the country's changing makeup is giving rise to support services in other sectors, too, like health care.

Ryo Mayuzumi, an interpreter, sits with an older Chinese couple and translates what their doctor is telling them. "Don't worry, the surgery went smoothly," Mayuzumi says, eliciting looks of relief.

In 2015, Mayuzumi joined the Multi-language Information Center Kanagawa, a nonprofit organization in Yokohama that specializes in medical interpretation. When he signed on, he hoped to make use of his proficiency in Mandarin, gained when he worked in Beijing and Shanghai as a trading house employee. 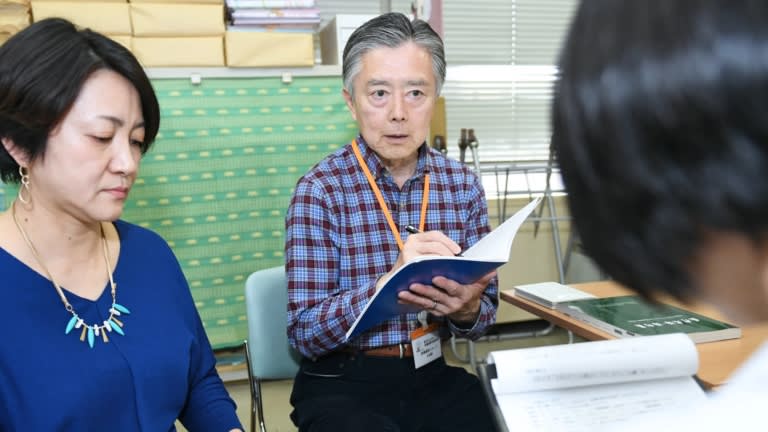 Ryo Mayuzumi, center, joined a non-profit organization of interpreters in 2015 and uses his Chinese language skills to support medical patients.

MIC Kanagawa dispatched interpreters 7,185 times in fiscal 2017, a more than 20-fold increase from fiscal 2002, when the organization was established. Over that span, the number of registered volunteers has risen sixfold to more than 200. It has contracts with most municipal governments in Kanagawa Prefecture and provides translation at about 70 medical institutions.

Medical support for non-Japanese speakers is far from sufficient, though.

This can have devastating consequences. About 30 years ago, Geraldine Kurahashi from the Philippines recounted, her second pregnancy was aborted because she was not fluent enough at the time to understand discussions between her ex-husband and doctor. She still regrets the abortion and said it is "painful that I couldn't receive proper medical treatment because of language barriers."

It may be too much to expect organizations like MIC Kanagawa, which operates purely on a voluntary basis, to meet the needs of the growing foreign population. The U.S. and Australia, in contrast, have developed medical interpreter programs financed by state governments and other sources. Interpreters are paid by the medical institutions to which they are dispatched.

Expressing a sense of crisis about the limitations of Japanese services when it comes to foreign residents, Hiroshi Aniuchi, director of the international division at the Kanagawa prefectural government, said the central government needs to lead the drive to adapt to demographic changes.