TOKYO -- Apparel company Sanyo Shokai suffered a crushing blow three years ago when it lost one of its main income sources: a contract to make and sell Burberry products in Japan. To recover, management cut payroll and shifted more resources to online sales. Then, last September, it instituted a program that reflects far broader changes now sweeping corporate Japan.

Japan is infamous for long, exhausting workdays. There is a reason the Japanese language has a word for "death by overwork" -- karoshi. But in a survey by Deloitte Tohmatsu Consulting last year, 73% of companies said they had either implemented reforms or were in the process of doing so. Back in 2013, the ratio was only 30%.

Atsushi Kato, a 27-year-old who works in distribution at Sanyo Shokai, feels the difference. He is free to start later in the day when he knows he will have work to do at night. "I became more conscious of [managing] time after flextime was introduced, and of separating my work from private life," Kato said. Now that he does less overtime, he cooks at home and enjoys shopping around for the best ingredients. "Dinners using fresh ingredients make me healthier and prepare me for the next day."

Deloitte's poll found that the most common reforms involved limiting overtime or encouraging employees to use their paid vacation days. Some companies were also streamlining work itself, say, by omitting redundant procedures.

One after another, Japanese businesses and institutions are creating management posts to enforce better working habits. Work reform is now very much in vogue, not only in the corporate sector but also in other fields plagued by excessive overtime, such as education and health care. Concern about Japan's working culture is not new. Karoshi, which describes suicides and illnesses caused by the stress of extreme overtime, has been considered a grave health issue for decades.

In late 2012, the term "black company" became a buzzword for employers that exploit workers. And in 2016, the suicide of a young employee of advertising agency Dentsu drew nationwide attention. She had been putting in a staggering number of hours and faced relentless criticism from her boss, described as "power harassment."

So why are companies -- and Prime Minister Shinzo Abe, who is pushing for work reforms -- getting serious now?

Munetomo Ando, a professor of economics at Nihon University, sees the country's deepening labor shortage as the main reason. The jobs-to-applicants ratio in the fiscal year that ended March hit the highest level since fiscal 1973. Under the circumstances, incremental wage increases are no longer enough to attract and retain quality workers.

Ando suggested Japan's traditional corporate practices, which include "ordering employees to work whenever and go wherever," do not fit today's realities. Often, employment contracts do not specify responsibilities, and companies frequently tell employees to relocate to another city or even overseas with little warning or consultation.

The trade-off for workers, mostly men, was lifetime employment. But Ando said this structure, built in the high-growth postwar days, is no longer the answer in an era where companies need to hire more women and seniors.

Companies are increasingly realizing this. They also realize that simply granting more time off is not enough. The average Japanese worker receives 20 days of paid vacation a year -- five more than in the U.S. and Singapore -- but uses only half of them, according to a survey by Expedia Japan.

Panasonic, which already allows employees to take two extra days of paid leave to care for elderly parents or attend school events with their children, has made it easier to actually use the days. Now, workers can take the time off on an hourly basis, as opposed to full or half days. 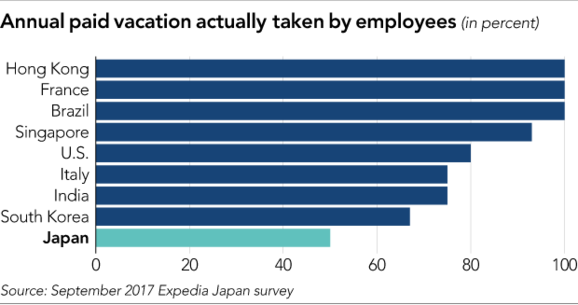 Panasonic's labor union was on board with the idea, since it gives workers flexibility. They can take an hour at the end of the day, for example, more often than they would take a whole day off. From management's perspective, the system helps reduce fluctuations in the number of people working on a given day, which is especially important in manufacturing.

Kazuhiko Ikawa, chief manager of Panasonic's office for a better workstyle, said this will "allow diverse workers to participate actively."

The hope is that work reforms will solve the country's productivity problem, too.

Japan's labor productivity, as measured in dollars per hour, was $46 in 2016. That was only about two-thirds the figure in the U.S. and good enough for only 20th place out of 35 members of the Organization for Economic Cooperation and Development.

"Work reform will help to increase Japan's real GDP growth rate by 0.5 to 1.1 percentage point," said Hajime Takata, senior managing executive officer at Mizuho Research Institute. Allowing a wider range of work styles and supporting the participation of women and seniors could help ease the strain on the economy from the aging and declining population.

Takata conceded that it would take more to maintain continuous economic growth of 2% -- boosting the birth rate, or capitalizing on advanced technology. But on the bright side, he said, this will be remembered as the time Japan's government, companies and employees all recognized the importance of work reform. 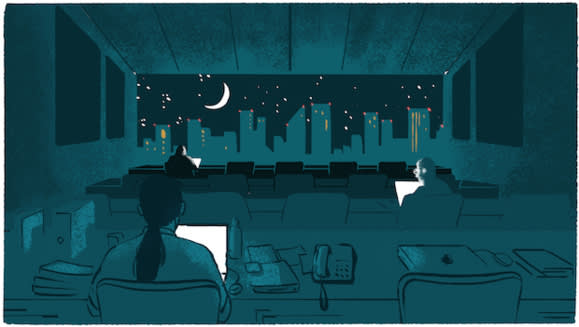 The government, for its part, faces an uphill battle.

A labor reform bill, which Abe has touted as the most important legislation in this year's regular parliament session, came up for debate in the lower house on April 27. Opposition parties initially boycotted the discussion, insisting Finance Minister Taro Aso should resign over scandals at the ministry. They agreed to stop stalling this week, but now the schedule is tight, with the session to end on June 20.

The reform package includes a cap on overtime at 720 hours a year and a requirement that companies set mandatory intervals between shifts. But the bill has already been watered down, after Abe scrapped an expansion of the discretionary labor system.

This system allows certain types of employees to be paid for a predetermined number of hours regardless of how long they actually work. The government argued that expanding the range of applicable fields would create more flexibility to accommodate different work styles and potentially reduce hours. But the proposal drew criticism after the government used flawed data to support it.

Political battles aside, the new corporate mindset is starting to have positive ripple effects.

Travel agency JTB estimates a record 24.4 million people traveled over the just-ended string of Golden Week holidays from late April to early May. Total spending on trips increased 2.8% over last year's vacation season, to top 1 trillion yen ($9.18 billion). A survey by the agency found that 11% of respondents were likely to take more time off over this year's Golden Week than last year's.

The impact has shown up on Nomura Research's balance sheet. Its operating profit for fiscal 2017 rose 11.3% to 65 billion yen. The national reform job is far from finished, though.

Working fewer hours does not always equate to a lighter workload. Some employees may feel exploited when companies clumsily enforce changes in the name of efficiency.

A 55-year-old consultant on regulatory strategy for medical devices, who asked not to be named, said she and her colleagues struggle to manage their own hours while her employer does not compensate for overtime. "The company says it is difficult to set common working standards since we all deal with different devices," she said.

As a result, she said she is losing her passion for the job. "My boss probably thinks I won't leave because of my age, but I'm motivated to get a new job elsewhere, or even start my own business. I have [enough] experience in this sector."

Businesses face a need to invest not only in automation and information systems but in people. And Nihon University's Ando warned that work reforms can dent productivity in the short term. Companies that hire more inexperienced women and seniors, for instance, will have to give them time to settle in and learn.

Ando believes that overtime and productivity will improve in "V-shape" fashion, getting worse before they get better. But if corporate Japan sticks with it, employers stand to reap benefits -- and even save lives.