Prices rise in big cities and beyond, but aging and old habits pose risks

UTSUNOMIYA, Japan -- The decline seemed unstoppable: Land prices in the city of Utsunomiya fell every single year from 1993 to 2016, dropping more than 70% over that span. Yet, since 2017, prices in the community 100 km north of Tokyo have been rising, albeit at an annual pace of less than 1%.

Utsunomiya is not alone. A Japanese property price rebound is underway, led by big cities and popular tourist destinations but extending to provincial towns long neglected by foreign investors and domestic homebuyers alike.

Residential land prices in Tokyo, Osaka and Nagoya have risen for six straight years. But this year, for the first time in 27 years, prices outside the three biggest metropolitan areas rose as well, according to the land ministry's annual assessment as of Jan. 1, released in March.

There are several factors at work. Low interest rates are fueling investment. Globalization, urbanization, tourism and the rise of China are all creating powerful tail winds for redevelopment.

Popular tourist destinations are logging the biggest increases in commercial land prices, after the number of foreign visitors to Japan tripled in five years to 31 million in 2018. In the Hokkaido ski resort of Kutchan, values rose 59% last year.

On the other hand, nationwide prices still stand at only 38% of the peak in 1991. Even this modest recovery has some market watchers concerned about overheating. And as Japan's population ages and shrinks, it is almost inevitable that some municipalities will be left behind.

That is a fate Utsunomiya is determined to avoid. "We won't let population decline stagnate our economy," a city official said. 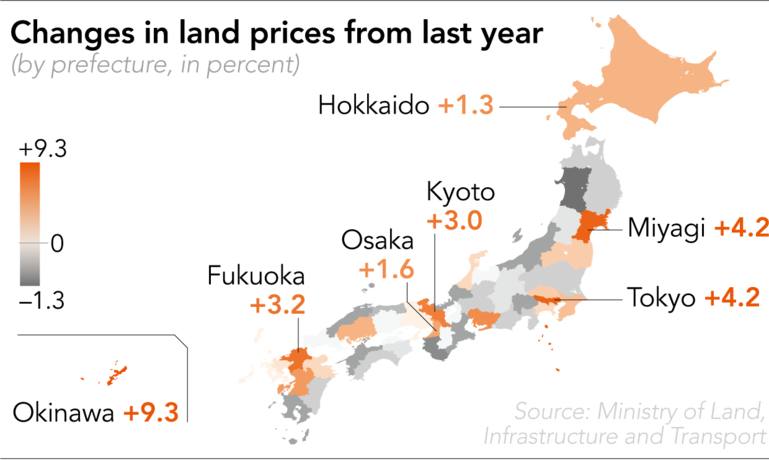 Like many of Japan's smaller municipalities, the city of 500,000 has its share of empty houses and shuttered stores. But Utsunomiya officials intend to reduce vacant homes, weed empty lots and turn them into parks, find new shop tenants and make the downtown core more pleasant. As a first step to enhance the city's appeal, a new light-rail transit line is under construction.

"The most important thing is to have people," said Kaoru Igarashi, a 71-year-old realtor in the city.

For Igarashi, things are looking up. "There is an increase in the number of customers looking for a house," he said.

Most of the buyers are from outside the city, working for big companies such as Honda Motor, which recently expanded its operations in the area. The new rail line will cover the 15 km between the Honda factory and the main railway station. Workers currently commute by car, sometimes spending up to two hours crawling along in traffic. Hokkaido's ski areas have seen some of the steepest land price rises in the country.

Mayor Eiichi Sato visits companies to ask what they and their employees need. Easy commuting and access to good schools always top the list. The redevelopment drive is also expected to encourage senior residents to be more active while bringing locals back to a city center they have abandoned in favor of out-of-town shopping malls.

Utsunomiya may be onto something. Higher land prices outside Tokyo are "partly due to urban redevelopment," said James Malcolm, chief Japan economist at UBS. "It's demographics, in a sense that it's remaking cities for a different sort of age [group] or population. It's a rebuilding of very old infrastructure that is happening in a lot of cities."

Japan's relatively low property prices and underutilized assets mean there is plenty of potential, Malcolm said. "The capacity to catch up is very, very great."

The price uptrend could work wonders for the Japanese psyche.

The property bubble of the 1980s and its devastating collapse, which coincided with the start of two "lost decades" of economic stagnation, undermined the country's confidence. More than six years after Prime Minister Shinzo Abe took office with a vow to defeat deflation, consumer prices are still barely rising, well short of the Bank of Japan's 2% inflation target.

Since real estate accounts for about 20% of the consumer price index, a full-fledged property recovery would have big implications for the war on deflation. "If Japan can generate inflation, then it changes almost everything," Malcolm said. "It changes the global narrative about inflation." 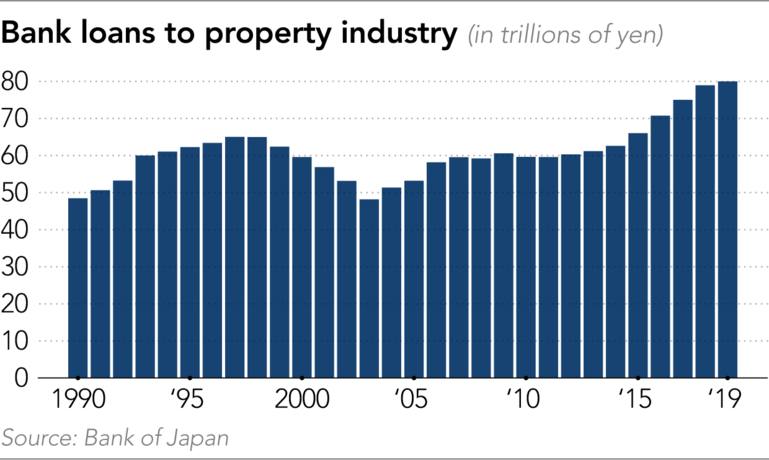 Many of the property price drivers are global phenomena. The low interest rate environment across much of the world has fueled investment in nontraditional assets, including property. Long-term investors such as insurers and pension funds have been especially aggressive in hunting for large real estate projects.

Then there is China's growth, which has lifted the living standards of citizens to the point where many can afford to travel abroad. Add in rapid globalization, and you have the makings of brisk property demand, at least in select areas.

Of course, the bulk of the activity is still concentrated in major centers. In Tokyo -- where the office vacancy rate is at a post-2000 low of under 1% and office rents are rising at an 8% clip -- developers and investors are bullish.

Dai-ichi Life Insurance is betting 60 billion yen ($543 million) on a project in Tokyo's central Toranomon district. The development includes a 38-story office complex with a hospital to cater to international businesspeople and their families. The entire endeavor is estimated to cost 150 billion yen.

New York-based Blackstone Group is also pouring cash into Japanese real estate, from offices and residential blocks to warehouses and logistics facilities for e-commerce. The company has acquired more than 600 billion yen worth of assets in Japan, mainly residential real estate, over the last five years. 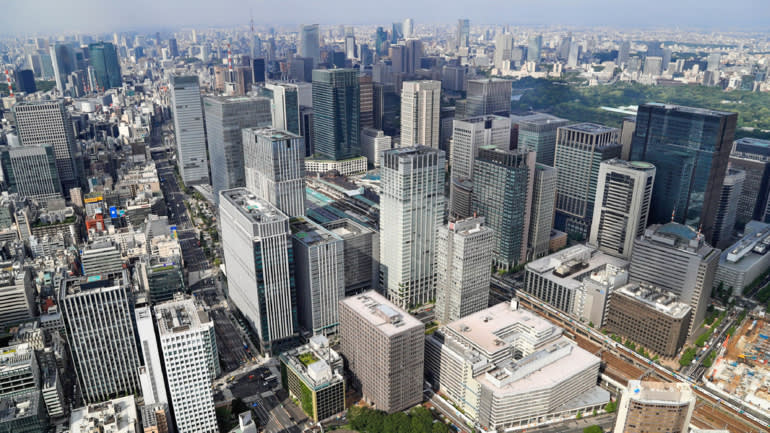 "Why do we invest in Japan when its population is decreasing? The population is actually increasing in the four major metropolitan regions of Tokyo, Osaka, Nagoya and Fukuoka," said Daisuke Kitta, senior managing director of Blackstone Group Japan. "We are not investing in Japan. We are investing in global cities in Japan."

Blackstone has more than $470 billion under management and, in the last few years, has made 40% to 50% of its profit from property. This highlights the importance of the market for generating returns in the age of rock-bottom interest rates.

Kitta said Japan's large and liquid market is appealing to foreign investors that want to harness Asia's growth without too much risk. These investors "especially prefer Japan and Australia."

Lendlease sees safer bets in Japan, especially close to big cities. "Moving into urbanization in Tokyo is a high priority at this point," Lombardo said. "We want to expand gateway cities. ... If you look at how the population is moving, they always move to the large urban centers."

Lendlease is looking to develop a roughly $2 billion office, residential and commercial complex in Tokyo. 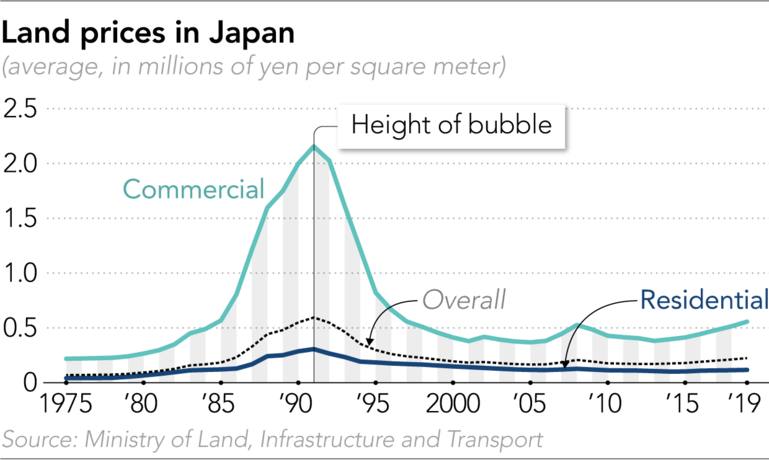 Overall real estate investment in Japan hovered at around 4 trillion yen a year from 2013 to 2018, double the level in the preceding four years, according to JLL, a Chicago-based research company. Despite the sense that carefully chosen Japanese real estate is safe, though, there are signs the market is getting out of hand.

The balance of loans to the property industry reached 78.9 trillion yen at the end of 2018, up 5% on the year and the fourth-straight record. The Bank of Japan in April said the ratio of lending to gross domestic product stood at 14.1%, prompting an overheating alert.

A recent spate of misconduct bodes ill, as banks and builders race to take advantage while they can.

Regional lender Suruga Bank was caught in a scandal last year involving more than 1 trillion yen in illegitimate loans. Employees were found to have falsified information about borrowers' income and down payments to help secure approvals.

Apartment builder Tateru was also found to have manipulated customers' income statements to help them obtain bank loans. Another apartment builder, Leopalace 21, was revealed to have constructed thousands of buildings that do not meet fireproofing and soundproofing standards. 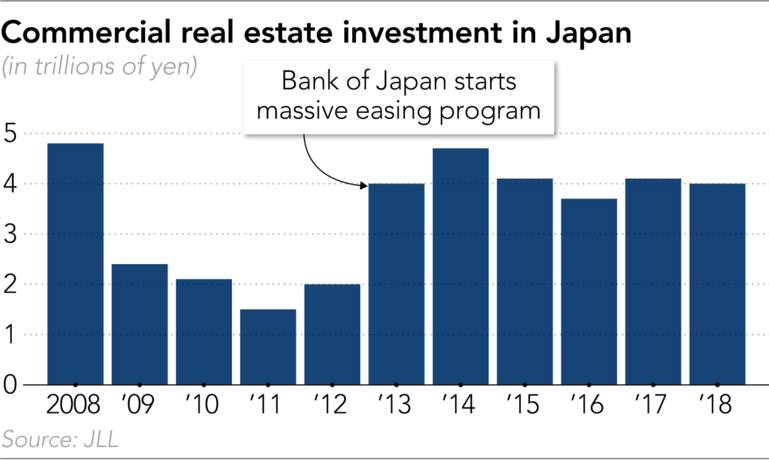 "Problems always happen when the property market heats up," said Takuma Hasegawa, president of Ichigo, a real estate and renewable energy company. The scandals have made him wonder whether the industry learned any lessons from the past.

As the bubble inflated in the 1980s, construction companies scrambled to build even impractical buildings on slivers of land. These held little appeal for tenants and became nonperforming assets, contributing to the banking crisis of the 1990s.

Hasegawa saw the perils of real estate up close when he worked for Ichigo's predecessor company, Asset Managers. Established in 2000, the company blazed a new trail for real estate investment in Japan, relying on bank loans as short as three years and drawing 90% of its profit from capital gains. The business grew rapidly, but when funding dried up after the U.S. subprime loan crisis, it ran out of credit.

Starved for liquidity, Asset Managers was forced to sell properties at the bottom of a cycle and suffered massive losses. Ichigo, run by former Morgan Stanley banker Scott Callon, bailed the company out.

Like Asset Managers, Ichigo invests in property. But it treads carefully: It uses long-term loans and takes pains to keep its properties attractive so that tenants will stay. This approach ensures steady rental income, if not hefty capital gains.

In the last 10 years, Ichigo saw its property values double from the low recorded after the Lehman crisis. For more recently acquired property, however, yields have narrowed to around 5%. Hasegawa said the company is prepared for a market downturn, which some analysts say could be imminent.

The key, he said, is not to bet on the market's direction but to provide desirable properties -- advice that could apply in places like Utsunomiya, too.

"We have learned a lot since the Lehman crisis 10 years ago," Hasegawa said, stressing there is now a greater focus on meeting customer needs. "The market can drop by half. How do you survive? You want to make sure you have property customers will choose."