The global race for a coronavirus vaccine is on, but efforts in Asian countries are largely trailing those in the U.S. and Europe.   © Nikkei montage
Asia Insight

OSAKA -- Japan's first clinical trial for a coronavirus vaccine is underway inside Osaka University Hospital. Some of the small-scale results, along with those from another university, are expected within the next month or so and will determine whether a larger trial can be held in November involving 500 people.

The project has attracted huge public attention and received financial support from the Japanese government. But whether the vaccine will receive approval and be manufactured on a significant enough scale in time for the Tokyo Olympic Games in July next year, remains a big question mark.

Like other vaccines being developed in the U.S. and Europe, Japan's was created from the virus's DNA information. An experimental technology that wouldn't have seen the light of day if not for the pandemic, it is the result of a joint initiative between Osaka University and drug development venture AnGes.

Ryuichi Morishita, a gene therapy researcher and professor at Osaka University's medical school who founded AnGes, awaits the trial results at a research complex next door to the hospital. As an interested party, Morishita stays out of the process.

"It will likely be difficult to produce enough vaccine for tens of millions of people by the end of the first half of 2021," as overseas pharmaceutical companies are expected to do, Morishita told Nikkei Asia. 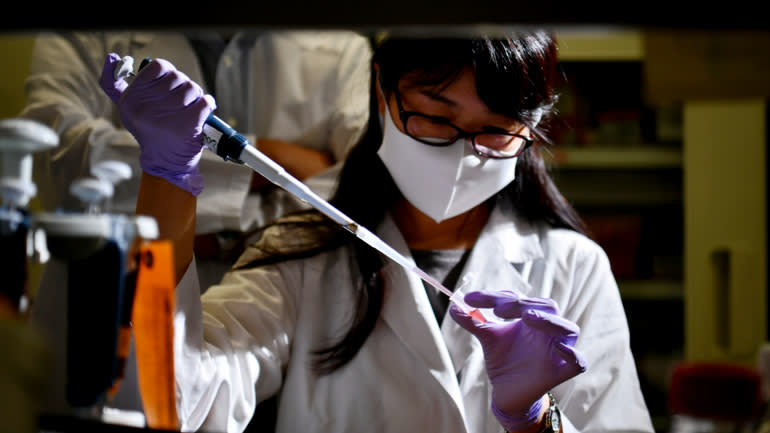 "Japan lacks the capability to respond to a pandemic quickly," he said, stressing it has not prepared for such a situation. "Drugmakers are focused on manufacturing, not on development, and are unable to step up to the task," he added. "The country needs to develop a framework for rapid vaccine development." Other experts agree with him that having a local vaccine in development gives the country bargaining power in negotiating purchases from overseas drugmakers.

But Morishita, also a strategic adviser to the Japanese government's health care policy headquarters also notes that the AnGes vaccine is the only one in the country to reach a clinical trial phase. "That's not very encouraging," he said.

The challenge for Japan, one of the world's most advanced countries and boasting a highly developed pharmaceuticals industry, underscores the inherent difficulty of vaccine development that other Asian nations, including India and Thailand, see as the key to saving their economies from a health crisis the Australian National University says could wipe out as much as $22 trillion globally this year alone. The Asian Development Bank warned in September that the region's emerging economies could contract for the first time in nearly six decades. Besides Japan, various vaccine efforts are underway elsewhere in Asia. The Serum Institute of India is in a late-phase clinical trial on a vaccine licensed from the University of Oxford. Thailand's Chulalongkorn University is developing one and aims to start a clinical trial this year with production expected late next year, according to media reports.

Bio Farma in Indonesia is aiming to manufacture a vaccine being developed by China's Sinovac Biotech in a licensing deal expected to allow production of 40 million doses by March. And a large-scale clinical trial is underway. Vietnam's Institute of Vaccine and Medical Biologicals, hampered by a lack of local testing infrastructure, has tried one on animals in the U.S.

Major global drug companies are expected to have the capacity to supply some 1.3 billion doses of coronavirus vaccines, according to Airfinity, a science information and analytics company. But most are earmarked for rich countries in Europe and North America, its data show.

Japan has hedged its bets by striking deals for 120 million doses each from overseas giants AstraZeneca and Pfizer. 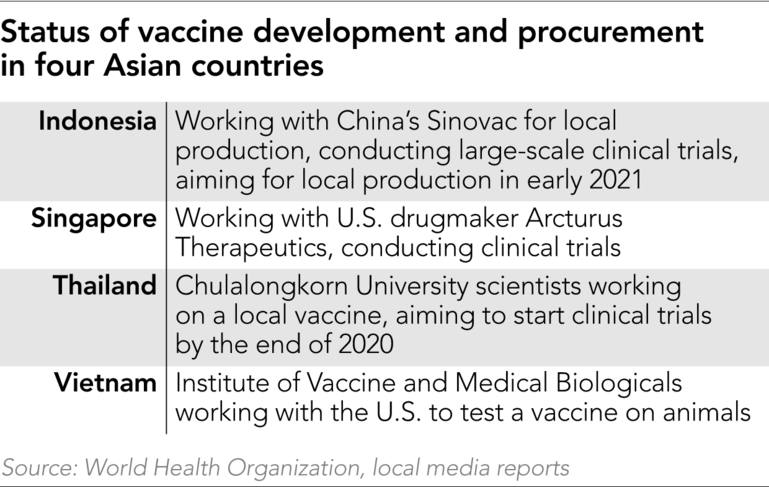 Unlike drugs, which are used for people with illnesses, vaccines are aimed at otherwise healthy people seeking protection, so the safety bar is extremely high. Cost is another factor. Hundreds of millions of dollars in research expenses often end up yielding nothing. "The success rate is extremely low," Hashiguchi said.

Further, he noted that vaccine complexity requires huge production facilities. And they must be manufactured on a large scale to cater to a country's entire population. But prices are set low for mass affordability, making it hard to recoup investments. With nearly 200 vaccines now under development worldwide, just a few may be successful, he stressed. Such obstacles may be pushing some to consider potentially risky alternatives.

When Russian President Vladimir Putin declared in August his country successfully developed a coronavirus vaccine, the Philippines and Vietnam expressed interest, despite concerns over safety. China is also making a major vaccine development push and dangling it as a diplomatic tool, in August promising priority access to five neighboring Southeast Asian countries.

"One-party, authoritarian regimes like Vietnam may have a greater need to demonstrate their ability to defend their own people from a pandemic than a democracy," says Kazuhiko Fuji, senior fellow at the Research Institute of Economy, Trade and Industry, an independent policy think tank.

But democratic countries like Japan and India also need vaccines. The government of new Japanese Prime Minister Yoshihide Suga is determined to host the delayed 2020 Olympics and must convince citizens it is safe to receive visitors from around the world. Indian Prime Minister Narendra Modi, meanwhile, needs to get millions of migrant workers -- a mainstay of the economy -- who are no longer able to travel within the country or to and from the Middle East moving again. His government simply doesn't have enough of a social safety net to support them.

Takeda Pharmaceutical, Japan's largest pharmaceutical maker, chose not to develop a coronavirus vaccine on its own, deciding to either manufacture or import and distribute those of two U.S. drug developers -- Novavax and Moderna.

While Takeda is developing a dengue fever vaccine, its chief executive Christophe Weber appears unenthusiastic about the vaccine business overall. Weber, former head of the vaccine arm at GlaxoSmithKline, "seems to be of a view that vaccines are a difficult business," Daiwa's Hashiguchi said. A person familiar with Takeda's thinking acknowledges such observations, saying development is costly and difficult with uncertain profitability. "Takeda is criticized for not developing a virus vaccine of its own, but R&D is not as easy as people think," the person said. Takeda's R&D budget trails behind 'mega pharmas' like Roche, Johnson & Johnson and Pfizer, even after its $59 billion takeover of Ireland's Shire in 2019.

AnGes has received 9.4 billion yen ($89 million) in an emergency grant from the Japanese government for the production of its vaccine, and another 2 billion yen for development, but Morishita says such support should be continuous. Overall, Japan has earmarked a total of some $2 billion for the development and manufacture of coronavirus vaccines.

Experts have long argued that the absence of innovative drug products in Japan is due to a business environment unconducive to risk. Regulators have been seen as conservative and averse to taking chances after drug-related tragedies. The approval process used to take longer than in the U.S. and Europe.

Japan also has one of the lowest levels of vaccine confidence in the world, according to a study released in September by the British medical journal Lancet, possibly due in part to a human papillomavirus (HPV) vaccine safety scare in 2013.

Another key factor for the urgency of vaccine development in Asia is that coronavirus deaths disproportionately occur in the elderly and the region is aging rapidly.

Japan has the oldest population among the world's major economies. The share of people 65 or older is projected to increase from 28% in 2019 to 35% in 2040, while many health experts expect the coronavirus to become a recurring seasonal illness. Hong Kong, Singapore, South Korea and Thailand are also getting notably older.

"Countries with aging populations are most vulnerable to the coronavirus pandemic," the think tank's Fuji said, adding, "It's a responsibility of the Japanese government to help people embrace annual coronavirus vaccination."

Japan has made efforts to bring drug regulations up to date internationally. The Pharmaceuticals and Medical Devices Agency, Japan's counterpart to the U.S. Food and Drug Administration and the European Medicines Agency, has been expanded to a staff of about 1,000 so drug approval applications can be handled faster. Kazuhiro Shigeto, former executive director at the PMDA, stresses that the approval is a process "independent" of the government. "PMDA cannot call a vaccine safe or effective unless it is supported by data," he said.

A PMDA spokesperson echoed that, saying, "We will make evaluations based on scientific evidence, regardless of any political pressure."

Still, Japan's government budget for medical research remains much smaller than in the U.S. So, does the amount of venture capital for drug research.

That leaves smaller vaccine makers largely on their own. KM Biologics, one of the main vaccine makers in Japan, is developing one for the coronavirus using African green monkey cells. (Photo courtesy of company)

The company has developed vaccines using African green monkey cells before as well, so "when we learned that the novel coronavirus can be grown in a similar way, we thought there is room for us to contribute," said Kengo Sonoda, head of product development.

Sonoda said the biggest hurdle is a large-scale phase 3 clinical trial, in which a vaccine is tested on tens of thousands of people, including those with underlying illnesses, in two groups and take 2-3 years. "A trial involving 10,000 people could cost as much as $100 million," he added. KM Biologics aims to start a clinical trial this year and eyes a large-scale test in 2022.

AnGes's Morishita says it takes 5 years to develop a vaccine in the traditional way, but stresses such a timetable is unacceptable now.

"Are we going to live like this for five more years?" he said, referring to pandemic-induced restrictions on social and economic activity.