TOKYO -- For members of Japan's LGBT+ community, this year has been full of changes offering hope of greater progress toward legal equality.

In mid-September, Utsunomiya District Court awarded damages to a woman who split with her female partner over infidelity, granting de facto recognition of their common-law partnership.

Earlier this year, the Justice Ministry overturned a deportation order for a gay Taiwanese man who had overstayed his visa, taking into consideration his longtime partnership with a Japanese man.

And in August, a transgender woman from Southeast Asia who was in a 17-year relationship with a Japanese man was granted a long-term residence permit, becoming the first foreign transgender person given special permission to stay in Japan.

What these developments show is that local governments, courts and even ministries are taking incremental, bottom-up steps forward rather than waiting for Prime Minister Shinzo Abe's government to lead with sweeping national reforms. But Abe may find that his reticence over the issue -- playing to his conservative base and pleading constitutional complexity -- is behind the times. A same-sex couple in Japan holds up a sign declaring: "We want to get married." Movement toward legal recognition of same-sex marriage is happening at the local level in the country. © Getty Images

"Now, even if you don't agree with people being LGBT, we are talking about it," says Nelson Ysabel, President of Stonewall Japan, an LGBT+ support organization. "The change is coming."

"Public awareness about LGBT [people] has been rapidly raised," says Makiko Terahara, an attorney at law firm Tokyo Omotesando. This is thanks to LGBT+ people speaking up. Terahara represents plaintiffs in cases involving 13 gay couples who are suing the Japanese government. The couples claim the government's failure to legalize same-sex marriage violates their constitutional right to equality.

Progress on the issue has been gradual but steady in recent years. Since Tokyo's Shibuya Ward became the first municipality to recognize same-sex partnerships in 2015, at least 25 towns and one entire prefecture, Ibaraki, have followed suit. These jurisdictions issue partnership certificates that same-sex couples can use to apply for public housing, for example. The business community is keen to stay ahead of the curve as well. The American Chamber of Commerce in Japan recently warned in a statement endorsed by 61 organizations, including JP Morgan and Japan's own Panasonic, that the disparity in legal rights between heterosexual and same-sex couples "makes Japan a less attractive option for LGBT couples, compared to many other countries vying for the same talent."

So far, 28 countries and regions have legalized same-sex marriage, beginning with the Netherlands in 2001. Taiwan and Ecuador are the latest additions to the list, making the legal change this year. Japan is the only Group of Seven nation not to offer formal recognition of same-sex relationships.

Japanese business leaders, too, are beginning to fret that the lack of marriage equality is hampering their ability to attract top talent. Moriaki Kida, regional chief operating officer at consultancy EY Japan, laments that several of his colleagues have left Japan because it does not offer legal protection for their same-sex partners or their children. Moriaki Kida, left, sits with his British husband: Kida calls the lack of legal protections for same-sex couples in Japan a "huge loss for the economy." (Photo by Yuki Kohara)

"It's a huge loss for the Japanese economy," Kida says, given the country's need for highly skilled people and its declining population.

Kida himself is gay and faced legal barriers when he moved to Japan three years ago from New York. His husband, who is British, could not obtain a spouse visa. To legally remain in the country, his husband had to go to a Japanese language school and apply for a student visa. With marriages between a man and a woman, the foreign spouse's legal status is more secure: The visa period is longer, for example, and the foreign spouse can work legally.

The question of same-sex marriage is inherently political. Abe's Liberal Democratic Party says it is promoting social understanding of sexual minorities. The LDP said it would submit a bill dedicated to the "promotion of understanding of LGBT+ people" to the Diet during the January to June session this year but did not. The party now hopes to submit legislation during the October to December session, but it has not given a time table.

Gaku Hashimoto, the No. 2 parliamentary official at the Health, Labor and Welfare Ministry, admits that some lawmakers are cool toward LGBT+ rights, but adds: "We want to promote a society in which people, regardless of their sexuality, can feel a sense of security, and we want to eliminate prejudice based on lack of understanding."

Some LGBT+ people agree that changing public perceptions takes time. Yu Takase, a transgender man in his 20s, said that gradual acceptance leads to a deeper understanding: "It's better than a fast change that does not really sink in." But the LDP is avoiding the issue for the moment. "The LDP's stance is that we will think about what happens next after a social understanding is created and has penetrated," Hashimoto told the Nikkei Asian Review. "Whether the party discusses same-sex marriage depends on how public discussion goes."

One rationale for the LDP's go-slow approach is that allowing same-sex marriage would require a constitutional change. Japan's postwar constitution has not been amended since its adoption in 1947.

Article 24 of the document says: "Marriage shall be based only on the mutual consent of both sexes and it shall be maintained through mutual cooperation with the equal rights of husband and wife as a basis."

In 2015, Abe said in the Diet that changing the constitution to allow same-sex marriage would require "extremely cautious consideration" as it "does not envisage marriage between people of the same sex."

However, experts cast doubt on this interpretation. Sota Kimura, a constitutional scholar at Tokyo Metropolitan University, argues that it is "commonly accepted" that the constitution does not rule out same-sex marriage.

Kimura stressed that article 24 was written to make clear that women -- who were at a disadvantage in Japan's male-dominated prewar society -- now had the freedom to choose whom to marry without the say of third parties such as parents.

He argues that it is easy for the LDP "to say article 24 rules out same-sex marriage." It provides a convenient way to "cover up the party's true feelings that they don't actually want to legalize it."

In a surprising move, conservative heavyweight Hakubun Shimomura, head of the LDP's Election Strategy Committee, said in late September that same-sex marriage should be among the potential constitutional changes up for discussion.

But opposition parties reject this suggestion, calling it a way to hide the conservative party's opposition to change. "Same-sex marriage can be legalized without amending the constitution," says Taiga Ishikawa, a gay parliamentarian with the Constitutional Democratic Party.

"When one discusses constitutional changes for same-sex marriage, it is a package that includes the amendment of [war-renouncing] Article 9," Ishikawa told a gathering of reporters in September. "The LGBT community must say 'no' to being used to amend the pacifist constitution," Ishikawa said. 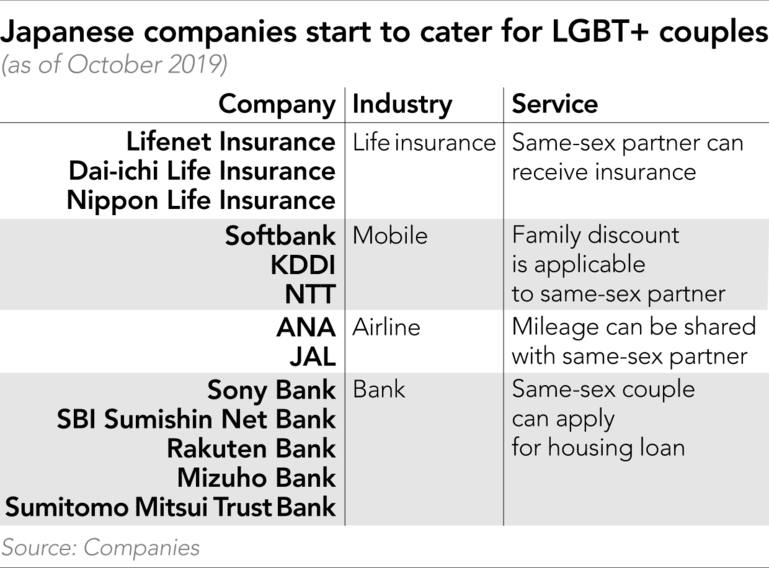 In June, opposition parties submitted a bill to the Diet that would allow marriage between people of the same sex. They argue that amending Japan's civil law by using a neutral term such as "party to marriage" instead of "husband and wife," for example, would enable same-sex marriage.

Terahara at Tokyo Omotesando agrees. "As the constitution does not rule out same-sex marriage, constitutional changes are not necessary," she says. Terahara adds that it is "extremely difficult" to change Japan's constitution: It requires a national referendum, which Japan has never held before. Ishikawa said that holding a national plebiscite would cost at least 80 billion yen ($736 million).

Masayuki Tanamura, a professor at Tokyo's Waseda University and an expert in family law, says Japan is at a tipping point. "Japanese society has long protected a traditional type of family and has excluded those who do not fit that."

Now there are more diverse families, the traditional model "does not reflect what a real family is today," Tanamura says, adding, "The LGBT rights issue raises a fundamental question: What defines marriage and family?"

Tanamura stresses that this is especially important for Japan, as the country is opening its doors to more people from abroad. "If LGBT citizens are treated equally, it means that all diverse people are protected equally," he says.

But for some it is too late. Satoshi Kimura, a 27-year-old gay man, left Japan six years ago for Canada, unable to envision a free and open life as a queer person at home. "I could not imagine myself when I grow older," he says. "I had no idea what my life would be, living in Japan."

Now he has a master's degree and permanent residency in Canada, and has been with his partner for four years. He has also developed a clear image of the life he wants to live with his partner. "Being an immigrant is not easy, but more than anything I can be myself and feel respected," he adds. "I don't think I'll go back to Japan unless it changes."