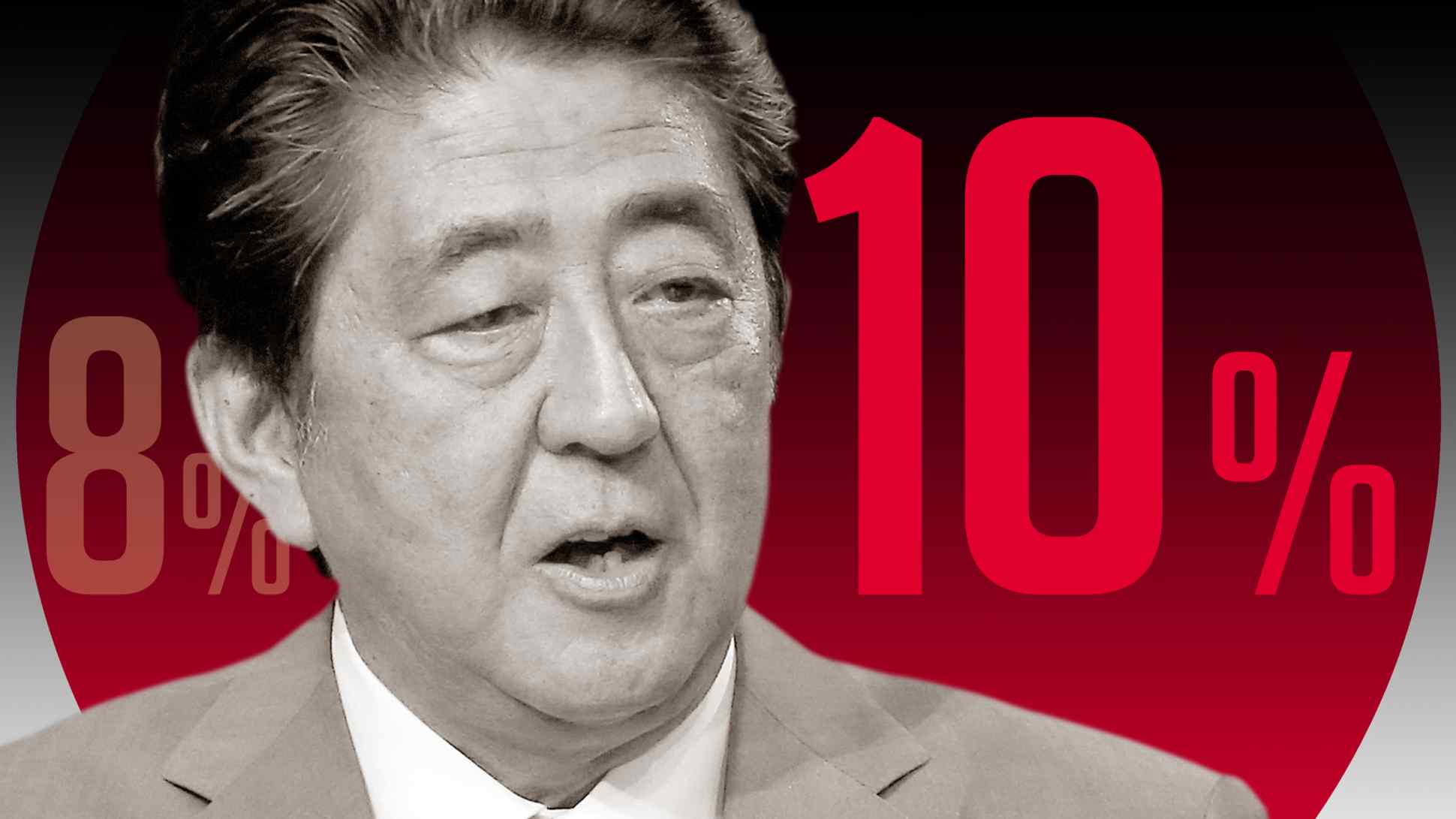 Businesses seek workarounds as Abe vows to avoid another downturn

TOKYO -- Japan's fast-approaching consumption tax increase, to 10% from 8% in October, is bringing back some painful memories.

The creation of the tax and subsequent increases have doomed prime ministers and severely dented the economy in the past. So consumers, businesses and the government are scurrying to prepare for the twice-delayed move, all the while wondering whether this time will be different.

Takao Teramoto, 27, had been planning to look for a new apartment in the fall but raced to find a place in August. "Given that I have to buy all the appliances, which will cost over 500,000 yen ($4,690), a 2-percentage-point hike is huge," he said.

Teramoto is not the only one hurrying to the stores. Bic Camera, a major electronics retailer, said big appliances like televisions, refrigerators and washing machines have been selling well this summer. Sales of OLED TVs, which go for around 200,000 to 300,000 yen, have doubled from last year.

"After getting bonuses, our customers tend to buy big things, probably because they have the hike on their minds," a Bic Camera representative said.

Businesses are preparing in their own ways -- one of which is to change their price tags. A Bic Camera store in Tokyo: Large household appliances like TVs and refrigerators are selling well. (Photo by Rurika Imahashi)

Mos Food Services, which runs the Mos Burger chain of fast-food joints, in September will change its menus to show the prices without tax. Making the food look cheaper could help soften the blow, and the tax-exclusive pricing will also make it easier to manage a quirk of Japan's system.

Until now, the consumption tax has been applied across the board, but certain goods and services will be exempt from October's increase. Takeout food, for instance, will still be subject to 8% tax, while restaurant customers who eat in will pay 10%. Rather than displaying two different prices for takeout and dining in, Mos Burger will only show the pretax amount.

Casual apparel retailer Shimamura, on the other hand, will show both the pretax and tax-inclusive prices on its tags. When the tax was raised to 8% from 5% in 2014, the clothier had continued to include the levy in its prices for customers' convenience. But this time it decided the breakdown was necessary.

A supermarket operator in the southwestern region of Shikoku reduced its capital to 50 million yen from 98 million yen in May. This classified the retailer as a "small or midsize" entity, rather than a "large" one. A representative of the company said it wanted to take advantage of government support for small and midsize enterprises, which will be introduced in October to cushion the impact of the hike.

This strategy seems to be catching on, even though companies risk hurting their own credibility. Japanese credit research agency Teikoku Databank said the number of retail businesses that reduced their capital during the January-July period of 2019 increased by 63.5% from the previous year. "Retailers are eyeing government support, such as the point reward program [to encourage cashless payments] and subsidies for upgrading register systems and installing new registers," said an analyst at Teikoku Databank, explaining that the trend started to take hold in January.

To avoid a potentially disastrous decline in consumption, the government has planned a host of temporary fiscal measures.

Besides allowing a reduced rate on food, beverages and newspapers, it will introduce free early-childhood education this fall. The government has also earmarked around 2 trillion yen for the cashless payment rewards along with shopping vouchers for low-income households and families with young children. Support for housing purchases, automobile tax breaks and public infrastructure improvements are also on the way.

Furthermore, Prime Minister Shinzo Abe said on July 29 that his government "will be agile and take macroeconomic measures without any hesitation," vowing to avoid an economic downturn.

If raising the tax requires this much damage control, why is the government so determined to do it?

Abe's team argues the increase is the key to addressing one of the country's biggest problems: ever-growing public debt, which is now more than double gross domestic product.

As the population ages, social security expenses in fiscal 2018 surpassed 32 trillion yen, accounting for 33.7% of the general account expenditure -- up from 18.8% in 1989. Tax revenue peaked in 1990, forcing the country to rely on government bonds to cover the costs. 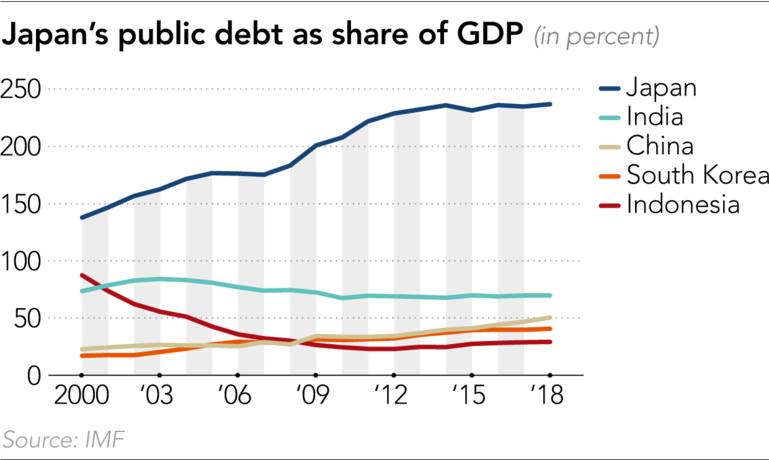 Proponents of raising the consumption tax see it as the most equitable solution. While corporate and individual income tax revenues depend mostly on working generations and fluctuate with the economy, the sales tax is seen as more stable and fairer, since everyone including seniors must pay.

Moreover, Japan's current tax rate is far below the Organization for Economic Cooperation and Development average of 19.3% as of Jan. 1. Only Switzerland (7.7%) and Canada (5%) had lower national sales tax rates than Japan.

Japan's National Tax Agency notes that a number of Asian countries had higher rates as of January, such as China (16%), the Philippines (12%) and Indonesia (10%), though Taiwan (5%) and Singapore (7%) were below the Japanese level.

While Japan's tax hike will not immediately fix the public finances, some economists estimate it will begin contributing to fiscal rehabilitation in 2021, gradually resolving the debt problem. Yet, the government conceded at the end of July that its primary balance will still be in the red in 2025, when it had been aiming for a long-awaited surplus.

The key question is how the economy will fare after the tax hits 10%.

History suggests Abe and the country may be in for a rough ride. In 1989, months after his government introduced the initial 3% consumption tax despite howls of opposition, Prime Minister Noboru Takeshita was forced to resign, partly due to a separate scandal. After Prime Minister Ryutaro Hashimoto's government raised the levy to 5% in 1997, the country suffered a serious economic downturn, intertwined with a financial crisis. Hashimoto's Liberal Democratic Party lost the upper house election in 1998 and he resigned to take responsibility.

When Abe raised the tax to 8% in 2014, Japan entered a recession, though the government did not recognize it and the prime minister survived politically. Now one worry is that, as in 2014, a surge in consumption before this October's increase will result in a steep drop-off afterward.

Despite the brisk sales at Bic Camera, the Teikoku Databank survey in June found that nearly half of Japanese companies said there has not been and will not be any last-minute rush. Only 30% said they currently feel or expect a demand spurt before October.

"It is most likely that last-minute demand this time will be smaller than in 2014," Taro Saito, director of economic research at NLI Research Institute, wrote in a report in July. He cited the smaller increase -- 2 points rather than 3. Abe speaks after his Liberal Democratic Party's victory in the upper house election on July 21. The LDP won convincingly despite its vow to press ahead with the tax hike. (Photo by Kosaku Mimura)

Some experts argue that either way, the tax increase will hit the Japanese harder than the government is letting on, and that additional measures will be needed to offset the effects.

Takuji Aida, chief economist at Societe Generale, argues that Japan has been stuck with sluggish domestic demand since the 2014 tax increase, as businesses have been in saving mode. "Companies laid people off [after the last hike] and continue to avoid borrowing money," Aida said, calling for further fiscal steps to spur corporate investment. "Otherwise Japan cannot get out of the deflation cycle."

Aida suggested debt should not be the focus for now, because revenue will only rise when the economy improves. "It is true Japan should push its fiscal restructuring forward," he said. "But the government's approach is in question: Do we need to restructure even if it means bringing an economic downturn?"

All debates aside, there is always someone who finds an opportunity in when the going gets tough.

Consumer electronics maker Casio Computer in June released a new calculator that can quickly calculate either 8% or 10% tax on a price. "Sales of the calculator have exceeded our expectations," said a company spokesperson, explaining it has been a hit with food wholesalers and restaurateurs who will need to add up different rates.