Japan lags behind numerous other countries in inoculating its population against COVID-19.   © Illustration by Hiroko Oshima
Asia Insight

TOKYO -- It was a sunny March afternoon in Tokyo and the atmosphere inside the Kotoen nursing care center seemed just as bright. Nearly 40 seniors were playing indoor games after finishing their lunches and baths. But Keiko Sugi, who runs the facility in the city's easternmost ward of Edogawa, said some regulars were staying away out of fear of COVID-19.

"Many seniors are holed up in their homes and become frail and mentally depressed," she said. Sugi has assured them that they will be able to socialize again as soon as they get vaccinated. The wait, though, is starting to feel interminable.

Prime Minister Yoshihide Suga's government says shots will arrive for the nation's 36 million seniors by the end of June. Sugi worries another three months in limbo could prompt some to give up on life, pointing to Japan's increase in suicides last year -- the first in 11 years.

"The government doesn't seem to understand the urgency of the matter," she said.

There is no denying that Japan is vaccinating at a slower pace than many other countries. As of last Friday, it had administered just 0.46 doses per 100 people in the population, according to the statistics website Our World in Data. This was behind 1.32 for South Korea, 2.69 for Indonesia, and around 12 for France, Germany and Italy. Singapore was leading Asia at 13.54, while the U.S. stood at 35.38 and Israel was far ahead at 111.68. 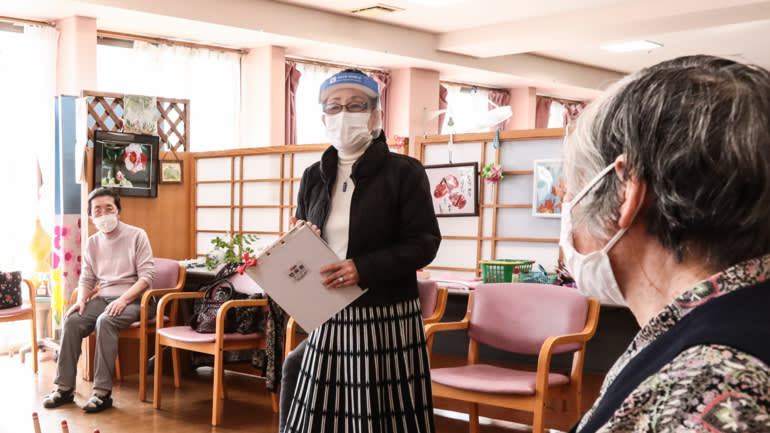 The Kotoen nursing care center's Keiko Sugi, center, says some regulars are isolating themselves out of fear of COVID-19. (Photo by Yuki Kohara)

Japan's unhurried rollout may be partly due to its relatively mild COVID-19 situation -- the seven-day average case count is about 1,200. But there is an opportunity cost to consider. Israel's rapid inoculations, for example, are paying off as the country steadily eases restrictions on events and other economic activity with its Green Pass proof-of-vaccination system.

While the government lifted its state of emergency in Tokyo on Sunday, the hard-hit restaurant sector remains under looser restrictions and organizers of the upcoming Tokyo Olympics have decided to hold the games without overseas spectators.

Some experts argue Japan is behind the curve on infectious diseases in general, and suggest a cultural aversion to risks might in fact create them. In a sense, the coronavirus vaccinations may be a microcosm of larger issues that become more pressing as the country's population ages and as it recruits international workers in greater numbers.

At Kotoen, Sugi approached a group of six women who were playing ring toss and asked them if they wanted to be inoculated for COVID-19. Five said yes, while one struggled to hear the question. One said she wanted a jab to stay healthy. Another, who lives alone, said her son would have to come to look after her if she fell ill, causing him trouble.

Caregivers are just as anxious. "Why can't we receive vaccinations at the same time as health care workers?" Sugi asked.

She explained that her 30 caregivers perform duties "fraught with infection risks." They help seniors eat, bathe and use the toilet. At the day care center, six or seven staffers bathe 20 people or more per day. Some make house calls, giving baths in confined washrooms.

Vaccinations for 4.7 million health care workers just began in earnest this month. Caregivers will have to wait for them, as well as the 36 million seniors and 8.2 million people with existing health conditions. 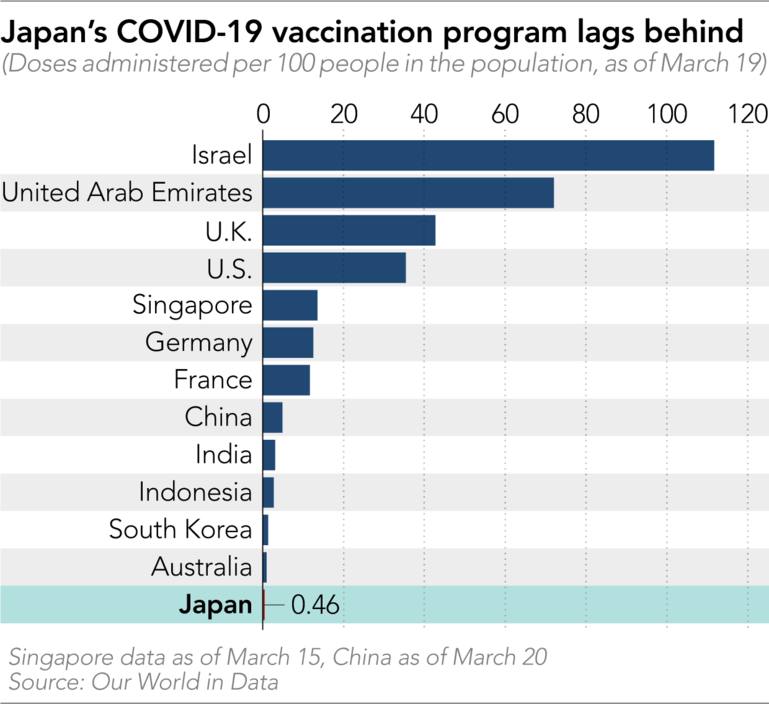 Kentaro Iwata, professor at the Kobe University Graduate School of Medicine, said the reality is that many health care workers who handle coronavirus cases have been forced to wait.

"Japan is merely responding to crises as they happen," said Iwata, who leads a team of 11 doctors in the university hospital's infectious diseases division. "It needs to anticipate what may happen in the future and take proactive steps."

He warned of other gaps in the country's vaccination programs, such as that for Japanese encephalitis, a brain infection caused by a mosquito-transmitted virus. Inoculating children is standard practice, but foreign nationals who come to Japan as adults are left unprotected.

As it strives to reduce a chronic labor shortage, "Japan just started accepting [more] foreigners recently, and is yet to have a strategy for keeping them safe from infectious diseases," Iwata noted.

One way to be more proactive, he suggested, would be to set up a politically independent organization of infectious disease specialists, like the U.S. Centers for Disease Control and Prevention. Such an entity would identify the vaccines needed for various population groups, set inoculation targets and devise strategies for hitting them. 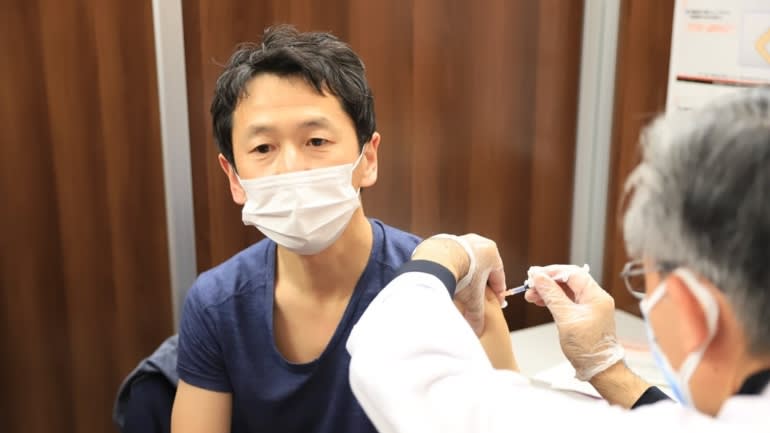 But there may be deep-seated factors holding Japan back from more aggressive action.

Japan once had a compulsory vaccination program, established postwar when infectious diseases were rampant. A turning point came in the 1970s, when the government faced class action lawsuits over problems caused by some shots.

In 1994, Japan revised its policy, making vaccinations voluntary. Today, a number of shots are available to children and seniors for free, but the immunization program has not been expanded nor promoted as aggressively as in other countries despite many new outbreaks. 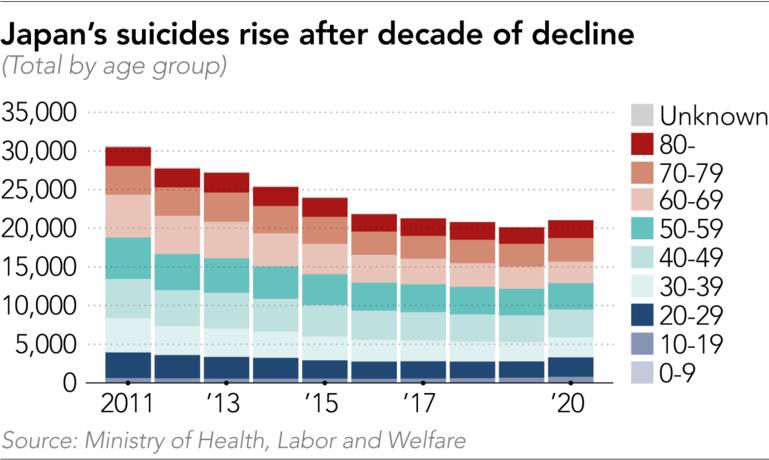 "Drugmakers worry about the risk of a pandemic ending before a vaccine is developed," he said. And "when the country is invited to participate in a global clinical trial, the government puts up many hurdles for research, putting off the drugmakers."

Once a vaccine is developed, many countries approve it without domestic trials but Japan insists on doing its own, driving "drugmakers toward other countries with easier access."

As for administering coronavirus shots, he explained the U.S. relies on nurses, pharmacists and medical school students. But in Japan, in principle, the injections must be done by doctors. Meanwhile, Japan's local governments tend to wait to draw up rollout plans until they know exactly how many doses will be available and when. 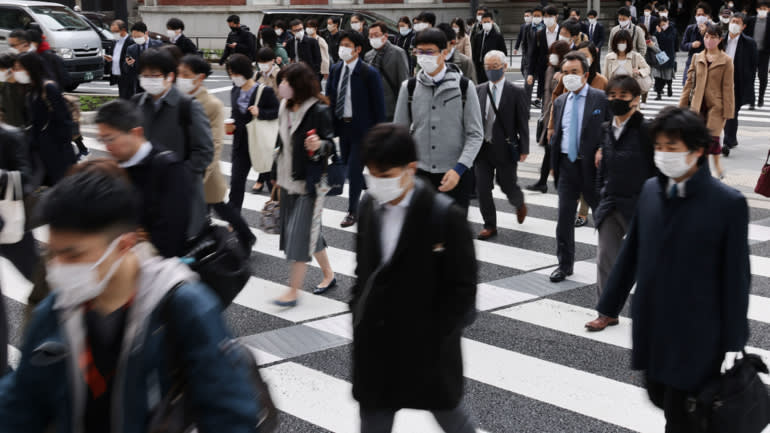 Commuters in Tokyo on March 22: Japan once had a compulsory vaccination program but made shots voluntary in 1994. (Photo by Yo Inoue)

Japanese pharmaceutical companies are pushing the government to adopt an "emergency-use authorization" system like the one the U.S. used for the Pfizer-BioNTech coronavirus vaccine last year. Several domestic players are developing their own COVID vaccines but face the challenge of conducting large clinical trials with tens of thousands of participants, which only becomes more difficult as infections decrease.

Osaka-based Shionogi is one company calling for a rule change. It acquired a vaccine developer in 2019 and was about to start developing a flu shot last year when the pandemic hit. Its solution entails inserting the gene of a COVID protein into an insect virus, and multiplying it in an insect body -- a technique used for flu vaccines and also adopted by rivals such as Novavax and Sanofi.

Shionogi began a small trial in December and is preparing for a large one. But a company representative insisted a more flexible approval system is urgently needed. The spokesperson stressed that local vaccine capabilities are essential because Japan cannot count on affordable overseas supplies and there is a danger of unique Japanese virus variants. 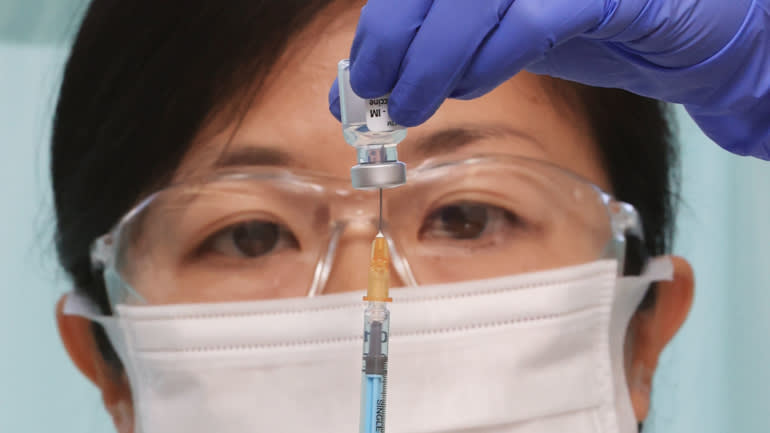 Pharmaceutical companies would like to see Japan adopt an "emergency-use authorization" system like the one the U.S. used for the Pfizer-BioNTech vaccine. (Pool photo)

On the other hand, prominent vaccine skeptics are also speaking up. One is Keiko Mori, a former head of infectious disease research at the National Institute of Public Health. Mori has published books warning about the risks of vaccinations and, at 86, works with volunteer groups to raise awareness.

"People have taken a lot of interest in vaccines thanks to the coronavirus pandemic," she said. "It's up to individuals to decide whether to take vaccines, but don't force them on people who don't want one."

Indeed, the government is forcing no one. Refraining from aggressive promotions, it has simply said the shots are free and will ultimately be available to everyone.

It has also promised to pay up to 42.2 million yen ($387,000) in compensation if someone dies due to receiving a shot. But vaccine proponents worry that fear of lawsuits and warnings from critics will only further hinder the rollout and development, constraining the economy. 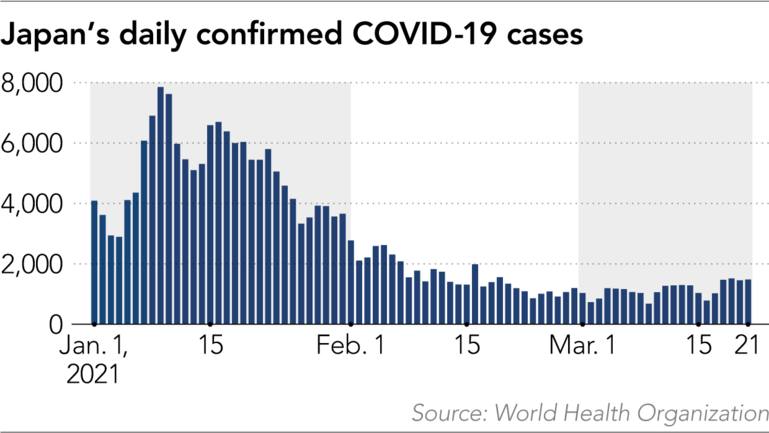 Experts like Kobe University's Iwata say grassroots education is the key to improving responsiveness. He said public literacy about infectious diseases is improving, albeit slowly. "There's a long way to go," he said. "We just have to sustain our efforts."

On the ground, meanwhile, many are eager to get the jab -- from Kotoen caregivers to the general public. Local governments at the tip of the spear are pleading for patience.

"Inoculations of ordinary people will start around the summer vacation season," Saito said.

Edogawa is one of the largest Tokyo wards, with about 700,000 residents. It has been swamped with work related to COVID-19, from tracking cases to delivering the central government's cash handouts and offering emergency loans to families and small businesses. Soon, Saito noted, it will "have to keep track of the vaccinations of 700,00 people." The Kotoen nursing care center is located in Tokyo's Edogawa Ward, which faces the challenge of tracking vaccinations for 700,000 residents. (Photo by Yuki Kohara)

He stressed it will need a digital system to do this, pointing to Israel's technology-driven success. "This cannot be done manually," the mayor said.

Another challenge will be ensuring foreign residents are covered. About 37,000 ward residents hail from abroad -- the second-largest number in Tokyo. Saito said the ward is preparing an inoculation guide in four languages -- English, Chinese, Korean and Vietnamese -- and is asking the Tokyo metropolitan government to provide a multilingual medical questionnaire.

By the end of next February, Prime Minister Suga aims to complete inoculations of people aged 16 and over. His government is believed to envision a coronavirus vaccination rate of 65%, which would exceed the 50% rate for flu shots. Saito reckons the figure could reach 80%, but said "it all depends on how serious the side effects will be."

"Seniors have their own networks of friends. Word-of-mouth will play a critical role," he said. "If they see many people receive a jab, they will follow suit. If they hear about side-effects, they will hold back."