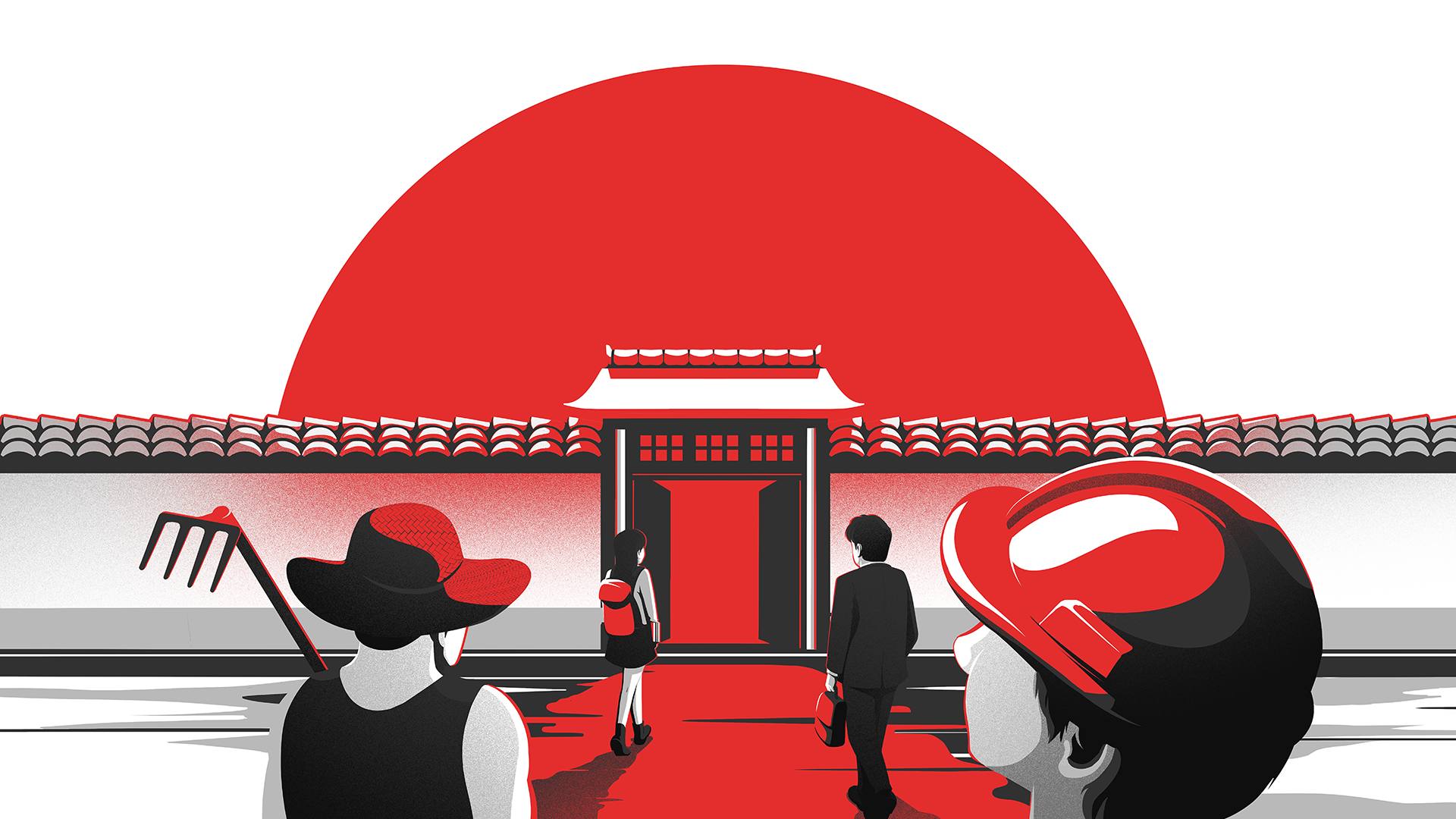 Japan to Asia: Give us your young, your skilled, your eager workers

BEPPU, Japan -- A rusty hot-spring town in rural Japan is emerging as an unlikely hub for Asian business talent, spawning startups and workers who are ready to trot the globe on behalf of Japanese companies.

The transformation of Beppu, on the southern island of Kyushu, exemplifies a change that is gradually advancing at the national level. As Asia rises as a global center of growth, Japan aims to harness that energy and secure its own future as an economic power by attracting young international workers and innovators.

Watcharainthorn Khamkherd, a 23-year-old videographer from Thailand, is among the ambitious Asians who have come to Beppu. Fluent in English, Khamkherd set up a video production company in April with a Vietnamese classmate at Ritsumeikan Asia Pacific University, located in the town.

Japanese companies "want to promote their products," he said. "We can do it for them because we have a lot of connections from APU students. That's why we can do it in many languages. We also have different perspectives." 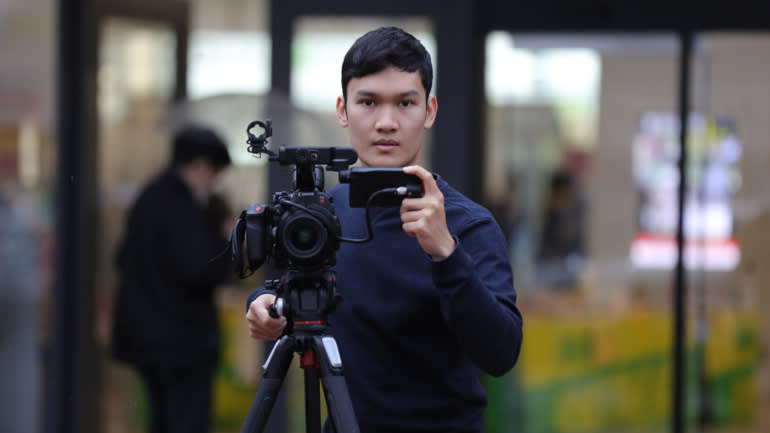 Watcharainthorn Khamkherd, a 23-year-old videographer from Thailand, set up a company in the Japanese town of Beppu in April. (Photo by Ken Kobayashi)

Beppu seems to have embraced its new role as a landing pad for newcomers. Hoping to reverse the city's economic decline, local residents welcome Asian students to their apartment buildings as neighbors; to restaurants, hotels and supermarkets as part-time workers; and, once they graduate, to local businesses as employees, managers and future leaders.

Is the rest of the country ready to do the same? Some deeply rooted attitudes and practices still stand in the way.

The improbable agent of change is conservative Prime Minister Shinzo Abe, who has taken a series of steps to open the country to workers from abroad.

From 2012, the year Abe took office, to 2017, the number of foreign workers jumped to 1.3 million from 0.7 million, largely through trainee programs.

In 2017, Abe's government launched a "Japanese green card" scheme that grants permanent residency to highly skilled foreign workers in about a year. The idea is to attract more information technology engineers, investors and entrepreneurs from around the world to create a global hub of financial and technological innovation. In December, Japan passed legislation to welcome foreign blue-collar workers for the first time and create a pathway to permanent residency. These workers will be issued visas to work in 14 selected industries for up to five years, provided they can demonstrate adequate command of Japanese and technical capabilities. Permanent status will be available to those with higher skill levels.

One major restriction is that the workers cannot bring their families during the five-year period.

Ambitious, hardworking employees from elsewhere in Asia are a godsend for sectors struggling with labor shortages, especially agriculture and construction. Not only is their presence helping to keep these industries alive, it is encouraging many businesses to start looking beyond the shrinking Japanese market.

"Having young and motivated foreign workers with the guts to work overseas helps inject new energy into the workplace," said Susumu Nagahashi, director at Business Co-operative Society MEC, a group that recruits foreign talent for small businesses in and around Tokyo.

Yet, the government's actions have raised anxiety that Abe was trying to pass a de facto immigration plan.

Opposition parties highlighted the poor working conditions some foreign workers face, noting that more than 100 died in work-related accidents over the past 10 years. In an attempt to stop the vote on the legislation, the government's opponents even tabled no-confidence motions against the justice minister and the head of a parliamentary committee.

Unfazed, the ruling camp simply plowed the bill through. More initiatives are in the pipeline. Japan is looking to make it much easier for foreign students to start companies while enrolled in the country.

Abe thinks foreign workers will help put Japan back on a much steadier growth track. The economy shrank an annualized 2.5% in the July-September period. Given this loss of momentum, and petering inflation, the prime minister's goal of lifting the economy to 600 trillion yen ($5.4 trillion) from 500 trillion yen by around 2020 remains out of reach. The economy hovered around 550 trillion yen this year.

One obstacle is the lack of human capital.

"The pace of hiring ... has slowed further in recent months as there are too few workers available to fill existing openings," said Frederic Neumann, co-head of Asian economics research at HSBC in Hong Kong.

"We need to break free of the conventional thinking. ... I will create a Japan that can attract great talent from around the world"

Increasing the foreign workforce, "even if temporary, is thus important to maintain economic growth and address some of the structural challenges facing the economy, including high public debt and persistently low inflation," Neumann added.

Despite Abe's other efforts to bring more women and seniors into the workforce, the overall labor shortage shows no signs of easing. In September, the ratio of job seekers to applicants hit 1.64. That translates to 164 jobs available for every 100 candidates -- the most open positions in 44 years.

Foreign workers are not just meeting employers' immediate needs. They also inject vitality into the economy, bringing fresh ideas and creating connections between their host and home countries. Half the students at Ritsumeikan Asia Pacific University in Beppu hail from other countries. The Japanese government is looking to young Asians to breathe new life into the world's third-largest economy. (Photo by Ken Kobayashi)

Consider Song Tao, a 30-year-old responsible for developing overseas business plans for Kumamoto-based trading house Marubishi. A native of Shandong Province, China, Song studied management at APU before joining Marubishi in 2013. Now he is helping the company run its operations in China, South Korea, Malaysia and Vietnam and prepare to enter Indonesia and Thailand.

Other Asian countries have welcomed Japan's opening. South Korea sees a chance to ease its own unemployment pressures.

Joblessness in South Korea climbed to 4.2% in August, the highest level since 2010. The situation has since improved to an extent, but college graduates still face difficulty finding work and some now look for jobs in Japan. The government in Seoul has thrown its support behind them. In June, it started a campaign to help 10,000 young Koreans land positions in Japan over the next five years.

In August, the Federation of Korean Industries held an opening ceremony in Seoul for a training program for students aiming to work in Japan. The program includes instruction in the Japanese language as well as skills specific to Japan's travel and airline industries. The federation noted that, with the job seekers-to-applicants ratio hovering around 0.65 in South Korea, young Koreans are keen to give working in Japan a shot.

"You've chosen to work in Japan as a new challenge in your life," Kim Yoon, head of the Korea-Japan Economic Association, said at the event. "I hope you will become a good worker in your workplace, so that your employers will hire Koreans again and offer new chances to others."

Already, the number of South Koreans working in Japanese offices totaled 24,125 as of June, up 14% on the year, according to data from the Ministry of Justice. Still, job-hunting is not easy unless you speak Japanese fluently, and many students have difficulty with the language. In other cases, there is a mismatch between graduates' skills and what companies are looking for.

Of the 23,946 foreigners who graduated from four-year universities or graduate schools in Japan in the year through March 2017, only 36% landed jobs.

The Abe government wants to raise the ratio to 50%.

Getting a job does not necessarily mean settling in Japan for life. Visas for white-collar workers, for instance, allow them to bring a spouse and children but not parents. Many eventually return home to look after their relatives.

The even stricter rules for blue-collar workers and trainees may prompt many to look elsewhere. And the competition for talent in Asia is stiff. Singapore counted 1.37 million foreign workers as of June 2018, including domestic workers and construction workers from China, Malaysia and several other countries. Migrants account for 46% of the city-state's population, compared with 5.2% for Thailand, 2.3% for South Korea and 1.8% for Japan, according to the International Organization for Migration.

With its English- and Mandarin-speaking environment as well as high educational standards and convenient public transport, Singapore is also a popular choice for multinational corporations setting up regional hubs and appeals to foreign professionals.

Singapore ranks 13th out of 63 markets in terms of its ability to attract global talent, according to Swiss business school IMD. That is the highest among Asia-Pacific economies and well ahead of Japan, in 29th place.

Experts say the talent hunt is a race against time.

Japan's higher living standards and salaries give it an advantage for now, but China is catching up rapidly.

Analysts like HSBC's Neumann voice hope that Japan will press on. "It is difficult," Neumann said, "to see how growth could be maintained at its current pace without some expansion in the workforce."

Abe continues to bang the drum. "We need to break free of the conventional thinking," he said in a speech to the Diet. "I will create a Japan that can attract great talent from around the world."

Nikkei staff writers Kentaro Iwamoto in Singapore and Kim Jaewon in Seoul contributed to this article.