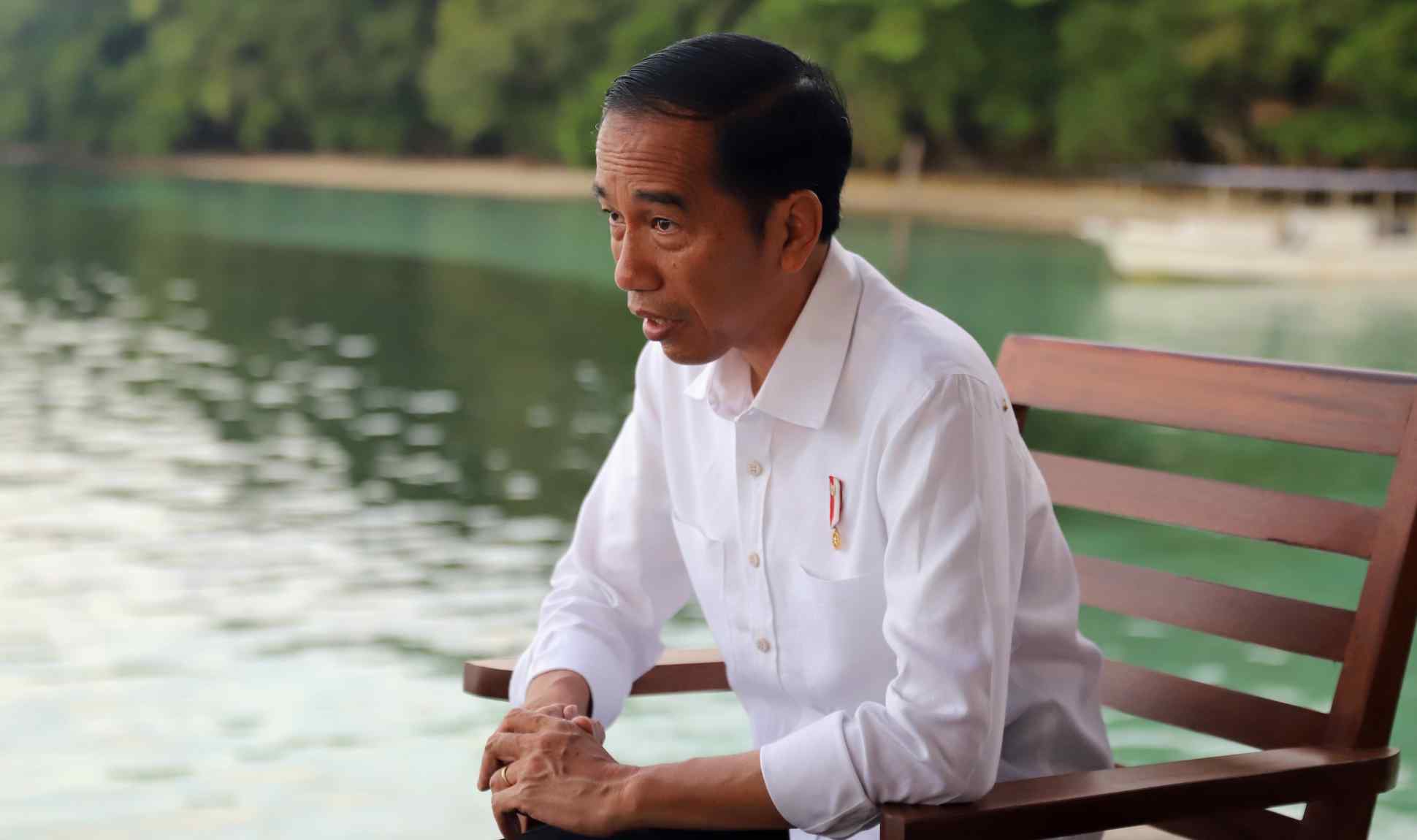 RAJA AMPAT, Indonesia -- Home to some of the world's richest coral reefs, the remote islands of Raja Ampat in eastern Indonesia are no secret among scuba divers. But President Joko Widodo wants to make sure these and other hidden national treasures get more attention.

"The runway will be extended to 2,200 meters," Widodo said on the morning of Dec. 22, when the Nikkei Asian Review caught up with him on a pier overlooking crystalline waters. The only airport in the area "will be able to accommodate bigger planes" after the expansion is completed next year, the president said.

Widodo's frequent visits to Raja Ampat and the rest of Papua -- where chronic underdevelopment has fueled a decadeslong separatist movement -- are part of his commitment to spreading the benefits of growth nationwide.

Shortly after taking office in October 2014 as the country's first leader from a modest family background, Widodo launched an ambitious infrastructure initiative aimed at kick-starting investment and easing sky-high logistics costs. Since then, he has conducted hundreds of in-person spot checks across the 5,000km-wide country of 17,000 islands and 260 million people. 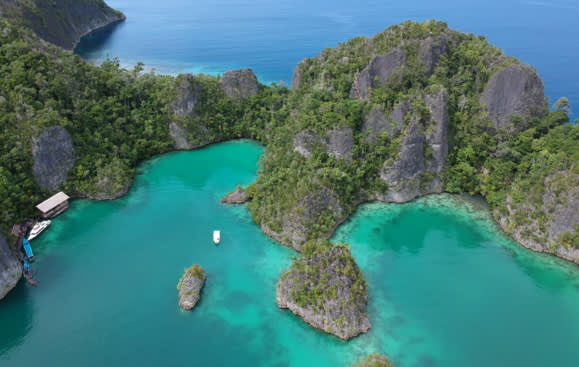 "Every day, he goes everywhere ... it is unbelievable for us," said Cabinet Secretary Pramono Anung. "Why? Because he knows that this is a rich country with a good opportunity but [has] so many problems."

Now in his fourth year in power, Widodo only seems to be growing more ambitious.

As early as January, Widodo's government will open a new building in Jakarta that will bring "hundreds" of administrative processes under one roof. The president said it is the latest in a series of measures to make obtaining business permits and licenses from regional governments less of a chore.

Widodo said this will allow the government to pinpoint "where a license is stuck."

"Is it at the provincial level, or the district level?" he said. "We'll be able to see it." Since the fall of the dictator Suharto in 1998, in the wake of the Asian financial crisis that wrecked the country's banking system, Indonesian presidents have sought to decentralize power away from Jakarta. But with regional authorities ill-prepared to wield that power, this led to overlapping regulations and corrupt local bureaucracies.

Through close monitoring, Widodo is essentially shifting some of the power back to the central government to create a more efficient business environment.

Widodo said his grass-roots background gives him a "better and more detailed understanding" of how things work, compared with his elite predecessors who ran the country for seven decades. The president ran a furniture business in the Central Java town of Solo before becoming the local mayor -- his entry into politics.

His efforts are starting to pay off: Indonesia's ranking in the World Bank's ease of doing business surveys jumped from 120th in 2014 to 72nd this year, partly thanks to one-stop investor approvals.

Hendra, who runs a construction materials shop in the West Papua port city of Sorong, feels the difference. "Competition is getting tougher now because it has become easier to open businesses" in Sorong, drawing people from elsewhere in the country.

And yet, 2018 is shaping up to be Widodo's most challenging year so far.

In early December, tens of thousands of people gathered at Jakarta's National Monument to mark the anniversary of a massive demonstration that triggered the downfall of a key Widodo ally -- then-Jakarta Gov. Basuki Tjahaja Purnama.

The demonstration in late 2016, is widely seen as the beginning of the rise of political Islam in Indonesia. It was triggered by a public outcry against Purnama, an ethnic-Chinese Christian who stood accused of insulting the Quran in a speech. And with just months to go before a gubernatorial election in April 2017, it created an opening for Prabowo Subianto, a former army general who lost to Widodo in the 2014 general election.

Subianto threw his support behind former Education Minister Anies Baswedan. Before the controversy, Purnama had been favored to retain the governorship, but Baswedan rode Muslim voters' anger to a landslide victory. The episode showed how religious passions, stirred up by the social media rumor mill, can turn an election upside down. As things stand, Widodo still enjoys much higher popularity than Subianto and anyone else who might challenge him for the presidency in spring 2019. But false suggestions that Widodo is Christian or Chinese helped Subianto close the gap in the final weeks of the 2014 race -- something that could happen again.

Widodo, for his part, appeared to shrug off Muslim groups' frequent rallies.

Demonstrations are "nothing special ... that is how democracy is in Indonesia," he said with a laugh. "It's safe. We tell them: if you engage in anarchy, you'll face the law." Next June, simultaneous elections in 171 provinces, cities and local districts could offer an indication of how Widodo's foes will play the "Islam card." West Java, home to around 1 in 5 voters, is considered a key test. Attempts to discredit the religious integrity of one leading candidate backed by half the members of the ruling coalition -- Bandung mayor Ridwan Kamil -- have already taken off on social media.

Losing allies in key regions could hamper Widodo's reform programs and give the Subianto-led opposition momentum.

Widodo's best bet may be to continue chipping away at domestic problems -- which could explain why, in the interview, he seemed more eager to discuss infrastructure development and reforms than global issues. 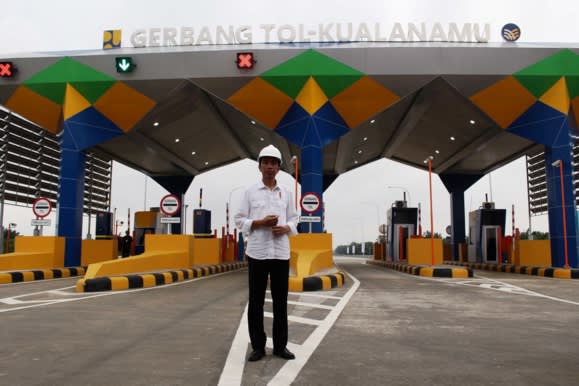 Indonesian President Joko Widodo stands by the entrance to the Trans Sumatra toll road in the province of North Sumatra on Oct. 13.   © Reuters

On free trade, Widodo said he is still "very interested" in joining what remains of the Trans-Pacific Partnership after the U.S. pulled out, although he added an "in-depth study is a must" before Indonesia can decide whether to go that route.

Similarly, he said he wants the Regional Comprehensive Economic Partnership "to be agreed in 2018" but conceded "it's not easy because all countries each have their own ambitions." RCEP includes the 10 Association of Southeast Asian Nations members along with Australia, China, India, Japan, New Zealand and South Korea.

The president played down China's rising influence in Southeast Asia. "I think there's no difference," he said, adding he is interested in China's ambitious Belt and Road Initiative "as long as it benefits Indonesia's national interest." While China has aggressively courted Indonesia on infrastructure deals, Jakarta has its share of concerns, including over the growing number of Chinese workers in the country and a territorial dispute near the Natuna Islands.

At least in theory, Indonesia has the ingredients to be a role model for the region and the world -- at a time when the traditional standard-bearer, the U.S., is turning inward under President Donald Trump. It is the fourth most populous country. It is a vibrant democracy. Its economic clout is increasing.

Widodo seemed to tentatively embrace a more active global role when the interview touched on security and the threat of terrorism. "Security, stability, peace in the world are very important," he said. "So countries should cooperate against terrorism, radicalism, exchange information on terrorism -- we must continue to do [that]."

But after what happened to Purnama, some politics watchers see Widodo's international positions as being geared toward wooing the Muslim majority at home. This includes his recent emphasis on the persecution of Myanmar's Rohingya Muslim minority and his opposition to Trump's recognition of Jerusalem as the capital of Israel. "Indonesia is always behind Palestine to fight for their freedom," Widodo said. 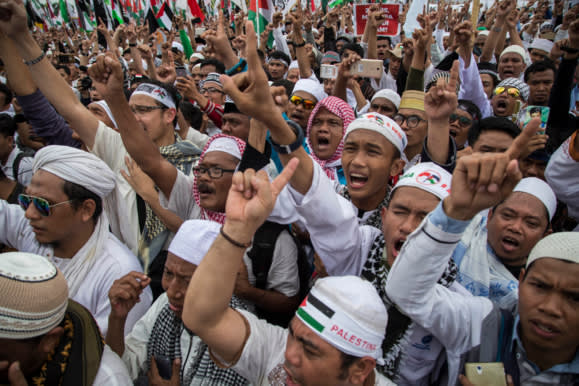 With only a shaky coalition behind him, Widodo "has to win the heart of the people," said Chatib Basri, a former finance minister. "The implication? The risk of populist policies can arise."

Although Widodo has yet to declare his intention to seek a second term -- he would only say "it's up to the people" -- there are already some signs of populism and that his government, too, is turning inward.

Widodo "has to win the heart of the people. The implication? The risk of populist policies can arise."

One of his most significant reforms was slashing gasoline subsidies at the beginning of 2015, to allocate more public funds to infrastructure. But for nearly two years, the government has not raised the price of regular gasoline despite a rally in benchmark crude oil prices. As a result, the state oil and gas company has lost more than $1 billion covering the price gap, according to the company's own accounts.

Investors are counting on more reforms to drive gross domestic product growth higher. For the past three years, the country's growth rate has been stuck at around 5%. In the third quarter of this year, the figure came in below Singapore, Malaysia, the Philippines and Vietnam.

"Other countries are integrated in the global economy, but in Indonesia, the source of growth is the domestic economy," Basri said. "So even though a global economic recovery is underway, we are stagnant."

If Widodo disappoints investors in 2018, the price could be high, especially with the U.S. expected to further tighten its monetary policy. Foreign funds -- crucial for sustaining economic development -- could flow out of the country.

The president brushes off such concerns, saying his mission is to solve the day-to-day problems of Indonesians. He makes no attempt to hide his "Indonesia first" stance -- a stance that sounds a lot like a re-election strategy.

"We want to fix the country first," he said. "After domestic [issues] are solved, then we will go outside more."