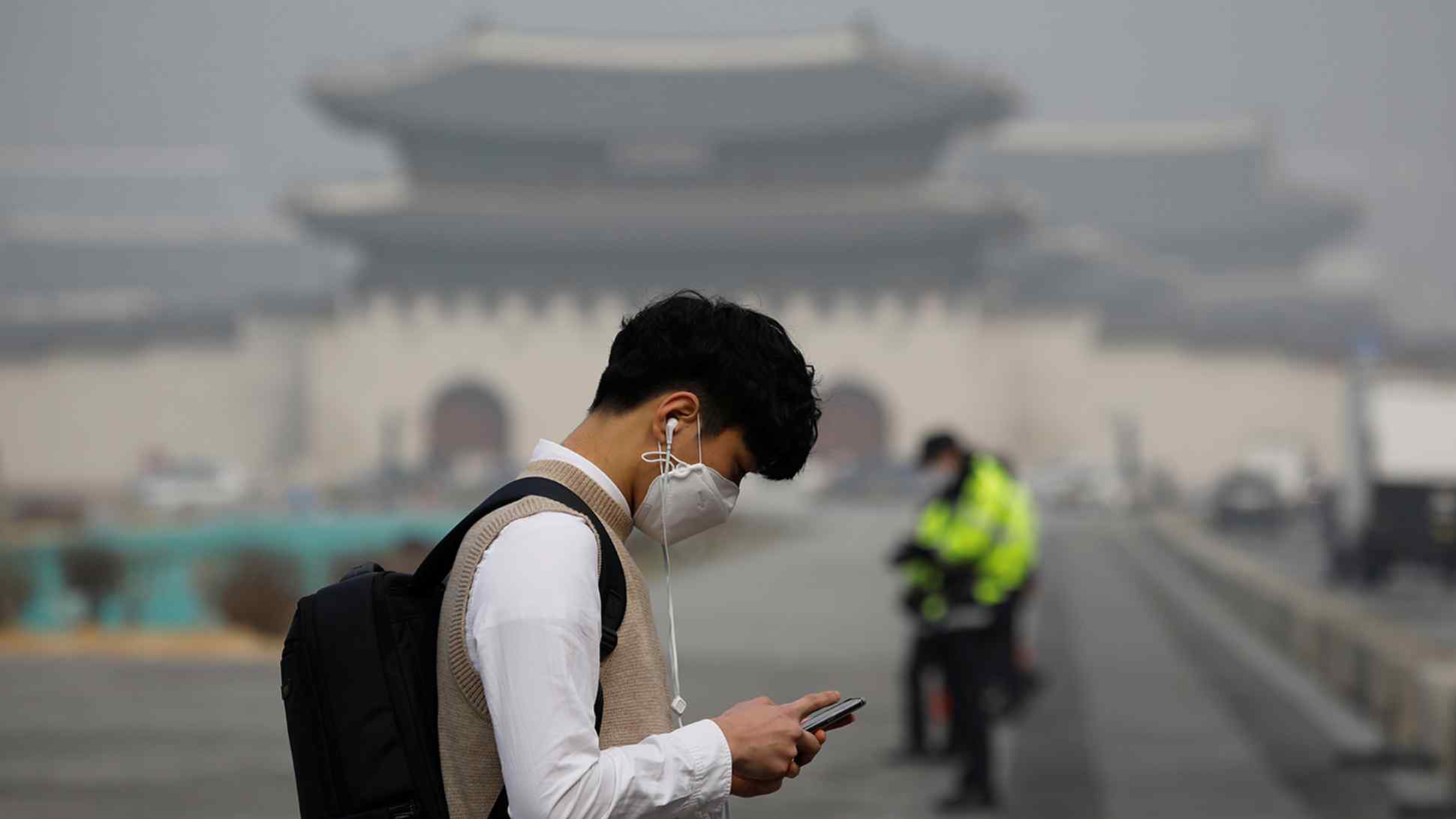 SEOUL -- South Korea is choking on smog, and even the president is pinning at least some of the blame on China.

Air pollution readings in early March hit three times the recommended levels, fueling something of a panic. Citizens are contemplating moves to Canada or Japan to escape the "killer dust." Parents are banning their children from playing outside, while schools are hastily setting up indoor playgrounds. And the National Assembly passed a bill declaring a "social disaster," freeing up government funds to fight the problem.

But President Moon Jae-in argues his country should not have to fight this battle alone.

"Fine dust is not just a domestic issue, but a problem related to China," Moon said on March 21 as he brought in Ban Ki-moon, the former United Nations secretary-general, to head up a new committee on the matter. The president expects the veteran diplomat to play a central role in relaying Seoul's concerns to Beijing and coordinating a response.

"South Korea and China need to acknowledge this as a common problem and make efforts together to solve it," Moon said.

China thinks South Korea is just passing the buck. The disagreement threatens to once again chill relations between the neighbors, which sparred in recent years over Seoul's deployment of a U.S. missile defense system. That feud led to China temporarily banning group tours to the South and other retaliation that proved painful for Korean businesses.

Lim Soo-hyang, a homemaker in Ilsan, north of Seoul, said she becomes "sad and depressed" when she sees children wearing face masks. What's the point, she wonders, of working so hard and building factories if it means living in a country where parents have to cover their babies' mouths.

"I have a friend who seriously looked into moving to Canada due to the air pollution," Lim said, adding that she has at least entertained the idea herself.

Some families stop short of considering emigration but still flee to the east coast on the weekends, where the haze is thinner than in the west. "I was happy to see that the [pollution] level on the east coast was 'bad' in Gangneung, rather than the 'worst' like in Seoul," said an office worker in the capital.

On March 5, the country's average level of PM2.5 -- fine airborne particles measuring less than 2.5 micrometers in diameter -- reached 104 micrograms per cubic meter. That is about triple the recommended maximum of 35 micrograms, according to Korea Environment Corp., a public-sector organization that promotes green projects. In central Seoul, the smog concentration that day was even higher, at 122 micrograms.

Before the latest crisis, Seoul's PM2.5 readings already exceeded those of many other major cities in advanced economies. In 2017 the average was 25 micrograms per cubic meter, above Los Angeles' 14.8, Tokyo's 12.8 and London's 11. 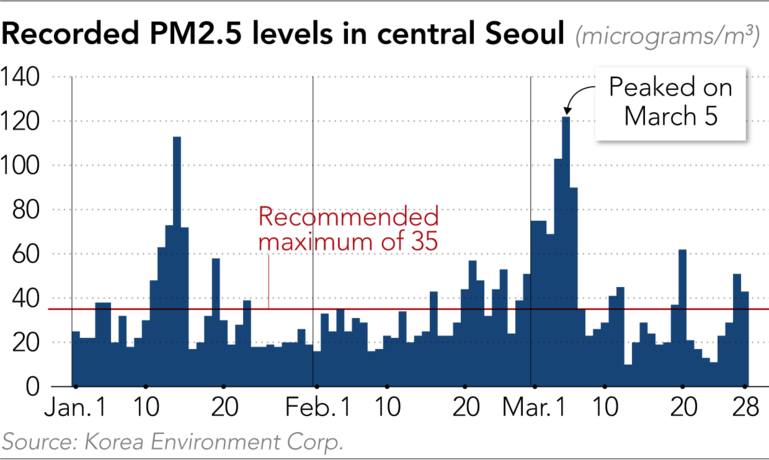 Moon's government is taking action. The Environment Ministry has imposed restrictions on vehicle traffic, construction and coal-fired power plants. On top of emergency funds unlocked by the National Assembly's declaration, the Finance Ministry plans to put together a supplementary budget of several billion dollars, some of which would go toward combating the pollution.

The government has also lifted a rule that limited purchases of liquefied petroleum gas vehicles to taxi drivers and disabled citizens. LPG is cheaper than regular gasoline, and the cars spew less pollution.

Like the president, many South Koreans have long been convinced that China -- infamous for its smoggy skies -- is the main source of their pollution. South Korean Foreign Minister Kang Kyung-wha came out and declared, "It is clear that China is a factor." She said the two countries are discussing how to deal with the matter together.

But in March, Chinese Foreign Ministry spokesman Lu Kang questioned whether Seoul has sufficient evidence to prove the smog is coming from China. "We all know that the cause of air pollution is very complicated," Lu said, pointing out that Seoul's recent readings of PM2.5 had surpassed those in Beijing. 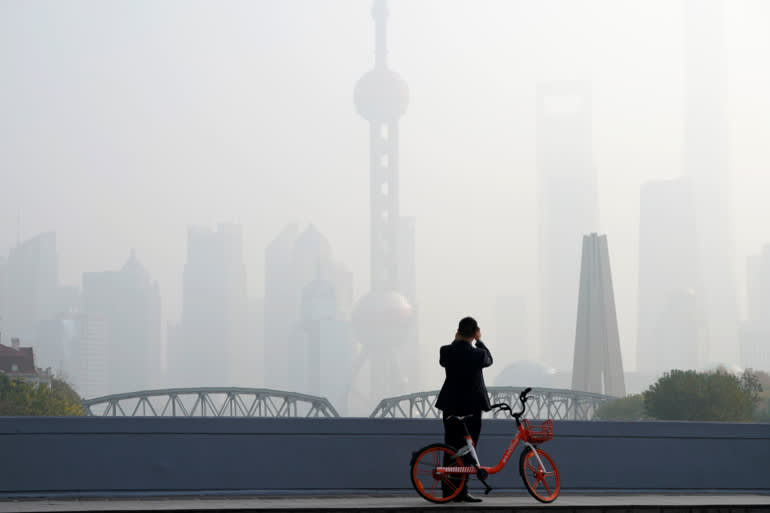 Smog covers the Shanghai skyline in November. China has been plagued by air pollution, but the government insists it is making strides.   © Reuters

Liu Bingjiang, the head of the air quality management department of China's Ministry of Environmental Protection, quoted research published by South Korean and U.S. scholars suggesting Seoul may have underestimated its local emissions of nitrogen oxide -- produced by burning fuel.

"If Seoul only blames the impact brought by transmission [from China] and refuses to look at its own problems, it will miss the best opportunity to combat air pollution," Liu told reporters in January. Liu said China's air quality has improved by more than 40% since 2013, and called for Asian countries to work together.

Even so, air pollution continues to haunt China. According to the 2018 World Air Quality Report released by AirVisual, mainland China had the 12th-highest average PM2.5 concentration, at 41.2 micrograms per cubic meter. South Korea ranked 27th, at 24.0 micrograms, while Hong Kong was 35th, at 20.2.

The WHO report made it clear that "killer dust" is no exaggeration. Every year, the organization said, 7 million people die prematurely due to exposure to air pollution. Two-thirds of those deaths occur in Asia.

Outdoor air pollution -- from factories and traffic, for example -- is responsible for 4.2 million of the total deaths.

The estimated death toll for South Korea reached 15,825 in 2016, according to a report from Jang Jae-yeon, a professor at Ajou University in Suwon, who cited WHO data.

Particulate matter in the air can end up in our lungs and cause serious health issues. The U.S. Environmental Protection Agency warns it can contribute to heart attacks, asthma, bronchitis and other ailments. Some studies have suggested links with lung cancer. 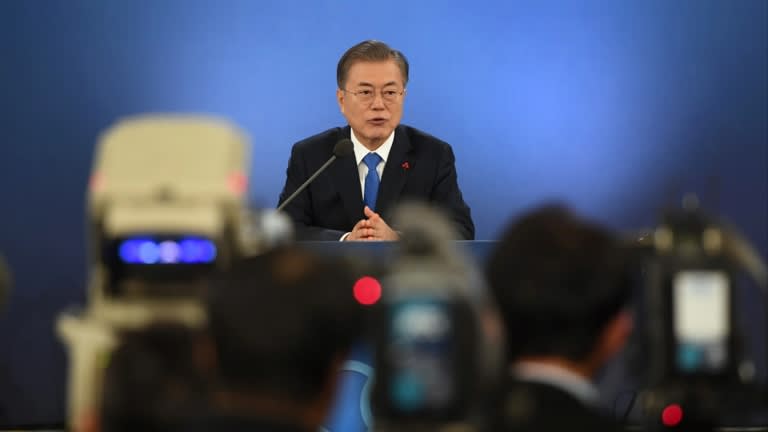 South Korean President Moon Jae-in's approval rating has been nearly cut in half, from its peak in 2017.   © Reuters

Sales of air purifiers have surged, boosting the fortunes of LG Electronics and Samsung Electronics. The overall air purifier market is expected to top 3 million units this year, up from 2.5 million last year and 1.4 million in 2017.

Market analysts in the country now track what they call "health appliances," including purifiers as well as dryers and steam closets. Consumers are buying these appliances rather than hanging their clothes out to dry in the smog.

"LG Electronics is leading the local dryer market, which exceeded 1 million units last year," said Kim Ji-san, an analyst at Kiwoom Securities. "It will mark 2 million this year, surpassing that of washers."

Face masks, not surprisingly, are selling well. Students are being advised to wear them on their way to and from school.

Companies are seizing the chance to burnish their reputations by easing consumers' fears. LG announced that it would donate 10,000 air purifiers to schools. Telecom company KT released a free app called Air Map Korea, which keeps users informed of air quality in their neighborhood using 2,000 monitoring devices installed at phone booths and base stations nationwide.

On the other hand, construction companies have been forced to suspend work to comply with government restrictions. Street food merchants lament that their sales are falling because commuters are rushing straight home after work.

For President Moon, the dirty air appears to be eroding his approval rating, which dropped to 44% in March from a peak of 81% in June 2017, according to data from Gallup Korea. Certainly, Moon's political rivals are questioning his opposition to nuclear power. While the president wants to shift the nation's energy supply toward renewables, skeptics argue that coal-fired plants will have to pick up the slack for a reduction in atomic energy. 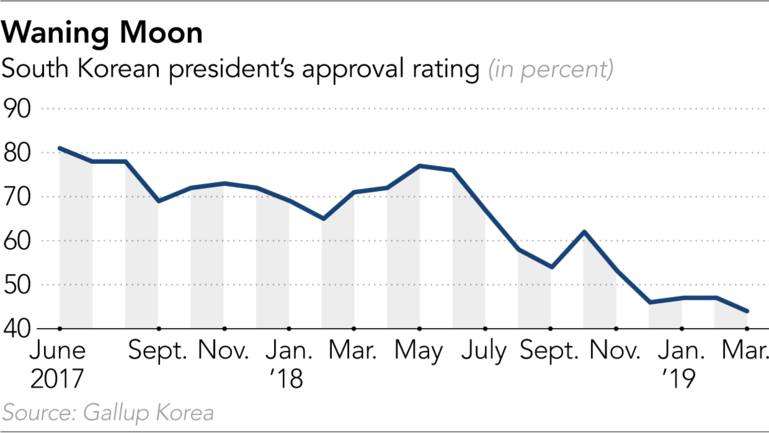 Either way, "fine dust pollution seems to have become a major domestic political concern," said Kwon Young-sun, a senior economist at Nomura. But Kwon argued it should be kept in perspective.

The pollution issue "is a much less severe problem than MERS," he said, referring to the outbreak of Middle East respiratory syndrome that swept the country in 2015. "The government's emergency measures and people's own reactions should be limited to only when PM levels are very high."

As for China's responsibility, not everyone in South Korea is playing the blame game. Some are calling for national soul-searching -- and reductions in coal power generation and pollution-spitting vehicles -- rather than finger-pointing.

Jang of Ajou University is one of them. He argues the country should do more to reduce its own emissions before blaming China. "The only solution is to reduce the level of pollution [within South Korea]," the professor wrote on his blog. "If you are afraid of fine dust, we should cut it in our country."

An executive at a tech startup agreed. "China is likely a problem," the executive said, asking not to be named. "But it is a mixture of many factors, not just China."