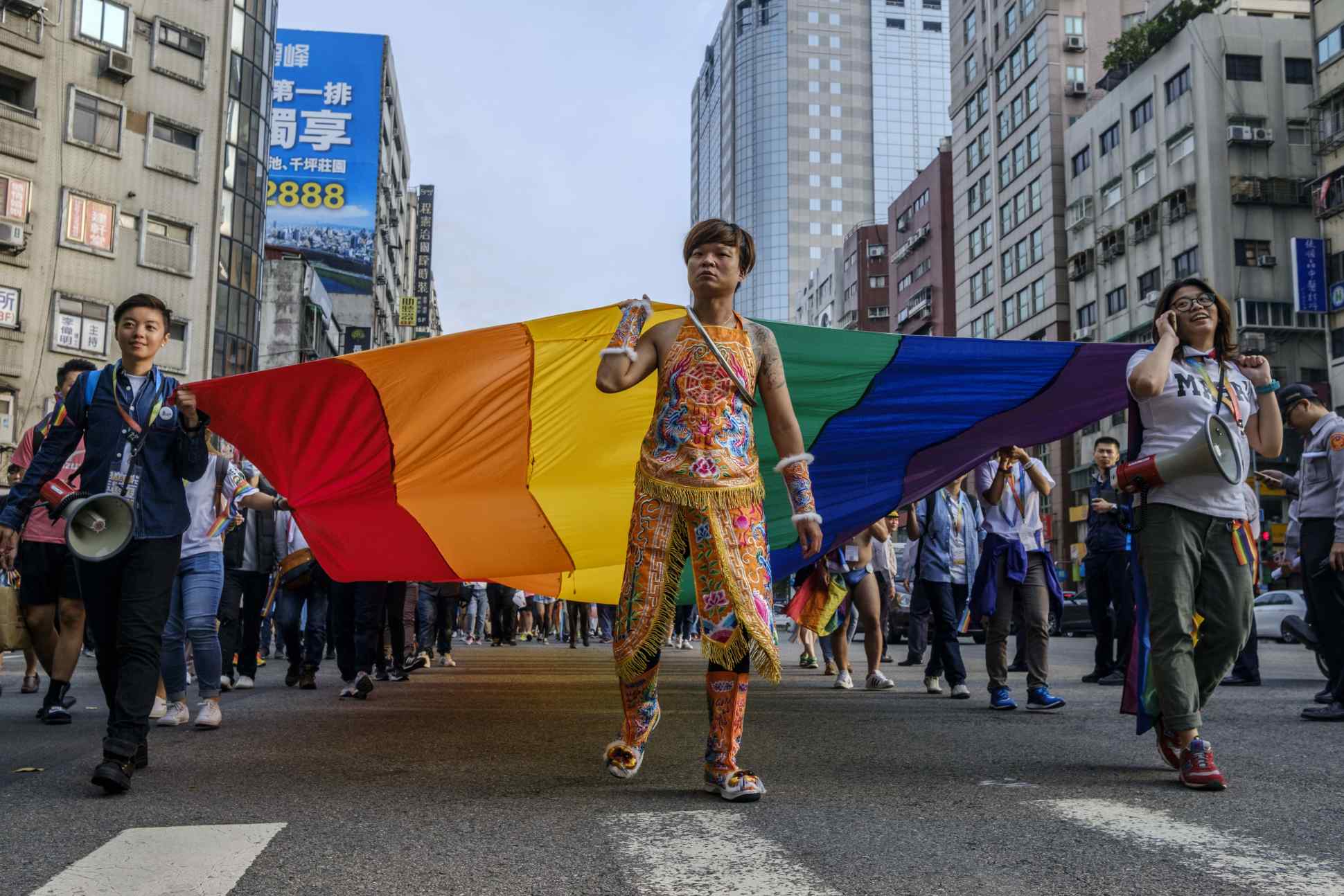 The 2017 LGBT Pride Parade in Taipei: Taiwan's top court last year became the first in Asia to rule in favor of same-sex marriage, but the fight is not over.   © Getty Images
Asia Insight

From Singapore to India, companies risk being caught in 'culture war' crossfire

TAIPEI/SINGAPORE -- It was a hot and muggy Saturday in mid-July, and Singapore's oasis of green was turning pink. Men and women gathered in Hong Lim Park, a 9,400-sq.-meter field in the middle of the business district, to celebrate the 10th anniversary of Pink Dot, a local movement in support of LGBT rights.

Among the mostly young crowd decked out in pink clothing was Chong Juu Hoe, a 20-year-old who was taking photos with his boyfriend and friends. "Legalizing gay marriage in other parts of the world will definitely help Singaporeans to notice us," he said.

"We are not invisible," he added, stressing that legal progress elsewhere would slowly "break down stereotypes against different sexual orientations."

To an extent, this is already happening in the Asia-Pacific region. Catching the wave of legalization that began in Western Europe in the early 2000s, Taiwan's constitutional court in May 2017 ruled in favor of same-sex marriage. New Zealand had legalized it in 2013, while Australia's parliament voted for it later in 2017.

In Hong Kong, the top court ruled in July that immigration authorities must grant same-sex partners spousal visas, which were previously available only to heterosexual couples.

But as the tide swells, conservative forces are rushing to put up barriers. The clash could open deep rifts in some Asian societies and, from a business perspective, make it difficult to recruit and retain talent in LGBT-unfriendly markets. 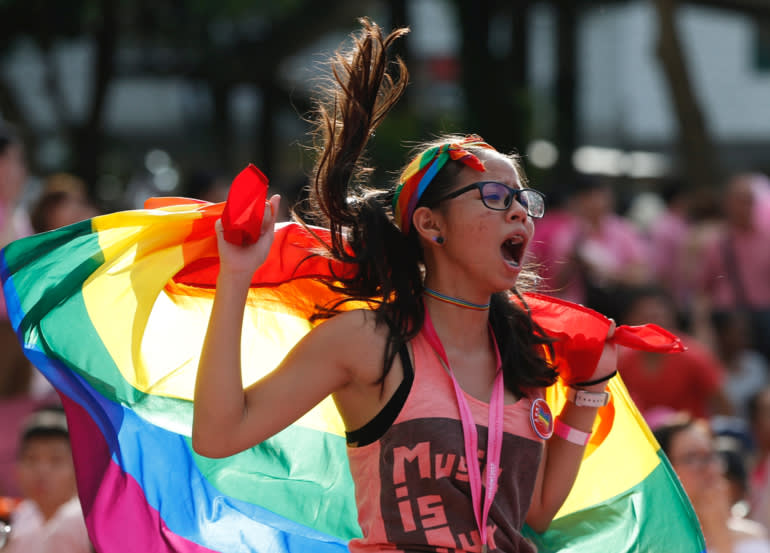 The Hong Kong visa lawsuit was filed by a British lesbian, who sued the director of immigration in 2014 after she was denied a spousal visa. "Although I cannot be [there] in person today, that does not diminish the joy I feel, knowing that Hong Kong's highest court has upheld my right to be treated equally," the woman, identified only as QT, said in a statement released by her lawyer after the decision.

The Court of Final Appeal said immigration policy is meant to attract foreign talent, and rejecting same-sex partners runs counter to that goal.

More than 30 global banks and law firms lauded the ruling, including Goldman Sachs and Morgan Stanley, which had long urged the Hong Kong government to grant visas for the partners of their expatriate gay employees. Discrimination, they argued, hindered their recruiting efforts.

Yet, court battles do not always go the way of the city's lesbian, gay, bisexual and transgender community.

In June, a gay senior immigration officer lost a judicial appeal against the Civil Service Bureau, which refused to grant his husband spousal benefits as a government employee. The couple were legally married in New Zealand, but the Hong Kong court said the government should protect the institution of traditional marriage, and that allowing spousal benefits could give the impression that same-sex marriage was being legalized implicitly.

Encouraged by the immigration case, the officer plans to take the case to the Court of Final Appeal.

"Hong Kong has not seen much progress in terms of the legislation against sexual discrimination since 1997," said Raymond Chan Chi-chuen, the city's only openly gay lawmaker. "We need more court cases to pressure the government." Uber is one of a number of global companies that support Taiwan's annual LGBT Pride day.   © Getty Images

Back in Singapore, the LGBT movement continues to encounter strong pushback.

Partly due to pressure from conservative forces, foreign individuals are barred from participating in Pink Dot, and international companies cannot sponsor the event. Legal restrictions meant to curb outside influence over domestic political issues have been applied to the movement, forcing organizers to turn down support from multinationals like Google.

Christianity and Islam, which account for more than a third of religious affiliation in Singapore, see homosexuality as a sin. The influential National Council of Churches of Singapore states on its website that "homosexual or bisexual practices are contrary to the teaching of the Bible" and that the only appropriate sexual relationship is "between a male and a female within the bounds of a monogamous marriage."

"Children should not be indoctrinated with the idea that homosexuality is OK," said David Tan, 42, a Christian businessman. "It is damaging to the core of society, which is the family." 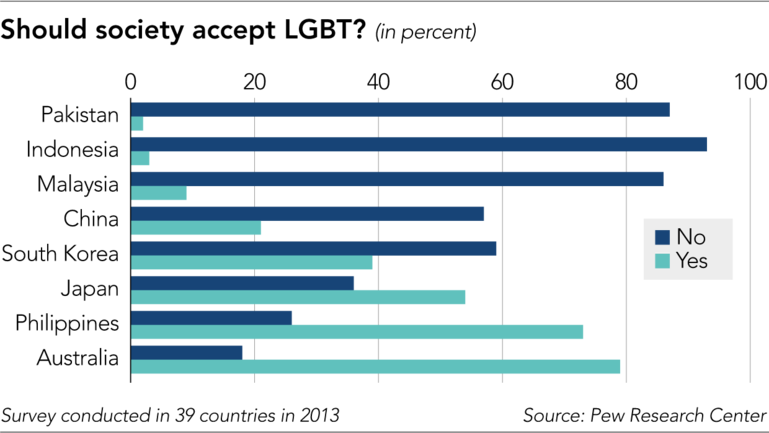 In Japan, lawmakers from the ruling Liberal Democratic Party sparked an uproar recently with disparaging comments about same-sex marriage and the value of LGBT people to society. Tomu Tanigawa, a lower house member, suggested on a TV show that LGBT relationships are like a "hobby." Lawmaker Mio Sugita penned an article in which she argued that same-sex couples are "unproductive" because they do not have children.

"LGBT acquaintances of mine are increasingly migrating to Canada, the Netherlands and Denmark," said Kazuhiro Terada, founder and president of the Equal Marriage Alliance, a nonprofit organization working to legalize same-sex marriage in Japan. Terada warned that talented LGBT workers may shun Japan without at least "civil union" legislation.

Even in Taiwan, the fight is far from over.

True, the highest court in May 2017 ruled that the civil code defining marriage as a union between a man and a woman violates articles in the constitution pertaining to freedom of marriage and the right to equality. The court called on the government to take legislative measures to address same-sex unions within two years.

Rights groups are pushing the government to follow through.

Boris Dittrich, advocacy director of Human Rights Watch, a U.S. nongovernmental organization, visited Taiwan in May and met with Vice President Chen Chien-jen, among others. Dittrich suggested politicians in Taiwan should demonstrate leadership and propose an amendment to the civil code granting same-sex couples the same marriage rights as heterosexual pairs.

A group called the Coalition for the Happiness of our Next Generation, however, has proposed a referendum on same-sex marriage to prevent its legalization. The Central Election Commission in April recognized the legality of the referendum, which could be held in November if more than 280,000 signatures are collected.

Stressing that both a father and mother are indispensable for a family, the coalition calls for a "special law" that offers same-sex couples' rights similar to marriage, instead of amending the civil code to change the definition of marriage. 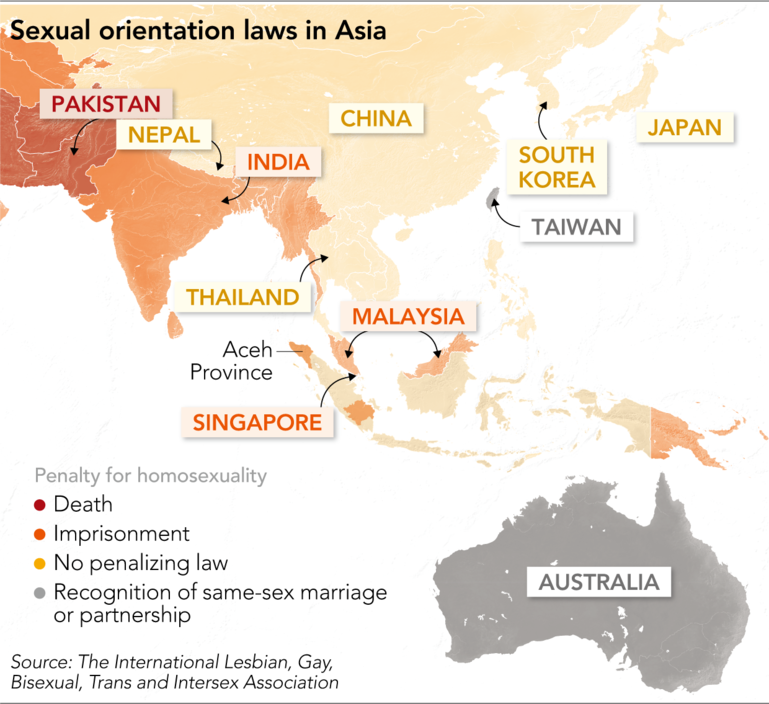 A far more aggressive campaign has been waged in Indonesia, where conservative Muslims form a large segment of the population.

The anti-LGBT side gained traction in 2016, after news that a student group at the University of Indonesia was openly offering peer support for LGBT students sparked a "moral panic." The controversy quickly snowballed, with public officials denouncing homosexuality and police ramping up raids on establishments where LGBT individuals were thought to congregate, such as saunas, nightclubs and hair salons. A judicial review filed with the Constitutional Court sought to outlaw gay sex.

Although the court rejected the lawsuit in December, the campaign did not stop. Two months later, lawmakers from all 10 factions in the House of Representatives -- Islamic-leaning or secular -- agreed that gay sex, along with sex out of wedlock, should be outlawed through an ongoing revision of the criminal code.

Politicians, including members of President Joko Widodo's Indonesian Democratic Party of Struggle, are clearly wary of alienating conservative Muslims ahead of the general election next April. 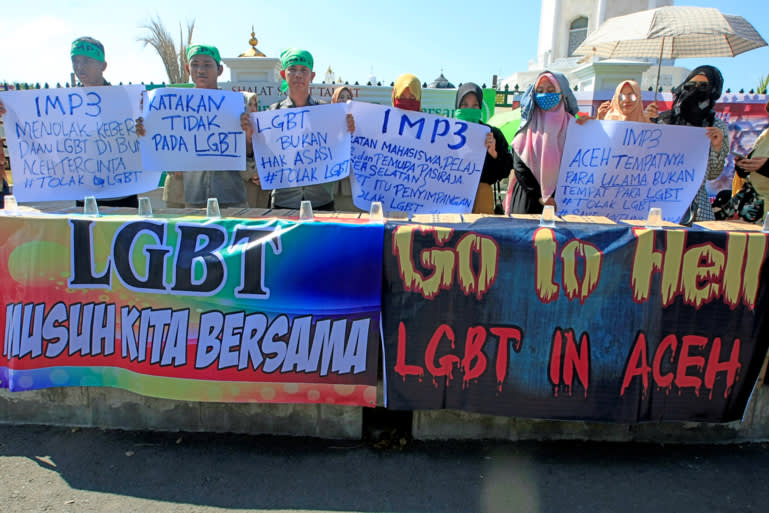 Muslim protesters hold an anti-LGBT rally outside a mosque in Banda Aceh, the capital of Indonesia's Aceh Province, in February.    © Reuters

Increasingly, the friction between Asian social liberals and conservatives resembles the "culture war" in the U.S., where the left is at odds with the Christian right, many of whom feel left behind by globalization.

India is shaping up to be the next battleground.

On July 10, the country's Supreme Court began hearing petitions challenging Section 377, a British colonial-era law that criminalizes homosexuality. Dating back to 1861, the law prohibits "carnal intercourse against the order of nature," including consensual same-sex relations, and imposes punishment up to life in prison.

The court agreed earlier this year to re-examine its 2013 decision to set aside a Delhi High Court judgment from 2009, which legalized homosexual acts among consenting adults. "A section of people or individuals who exercise their choice should never remain in a state of fear," the Supreme Court observed, while deciding to revisit the constitutional validity of Section 377.

The gay community is hoping for a favorable verdict this time. "The 2013 judgment was a travesty of justice," Apurva Asrani, a film editor and screenwriter told the Times of India newspaper, calling for equal rights and job security. "If the Supreme Court overturns its decision, and we have a good feeling they will, then a wrong would have been undone."

But as seen in the U.S. -- a leader in legalizing same-sex marriage but where fierce opposition persists -- the law is not everything.

"It would be a very good beginning" if India's Supreme Court changes its position, said Duru Arun Kumar, an associate professor of sociology at the Netaji Subhas Institute of Technology in New Delhi. "But the mindset of the society as a whole won't change overnight."