SINGAPORE -- The coronavirus pandemic has had far-reaching effects on economies worldwide, both big and small. And those are no more keenly felt than by one Indian engineer whose career in Singapore came to an abrupt and unexpected end.

The man, in his 30s, lost his job at a multinational manufacturer in the city-state in August due to a COVID-19-spurred restructuring. He hoped to land a new job there but found it "quite challenging," mostly due to the limited nature of his specialty.

But he also felt something else -- an "unwelcoming" mood as the local economy sank.

"I can only speculate ... but I'm seeing a lot of rhetoric in the newspapers about foreigners taking over local jobs, and the government in support of that," he told Nikkei Asia by phone from India after moving back in October, asking not to be named. "That may also play into why it's getting difficult."

As the pandemic slams the global economy, protecting domestic jobs has become a priority for many countries. U.S. President Donald Trump's administration in early October announced a tightening of the nation's H-1B visa program on just such grounds. In Asia, "dealing with new work permits is at the bottom of the priority list for most governments," the Economist Intelligence Unit said in August. Entry bans and other restrictions intended to stop the virus "could also be seen as protectionist measures designed to support local employment."

Singapore is also tightening its labor rules. But for the island country and its "hub" economy, that presents a particular quandary.

Foreign workers make up nearly 40% of the labor force -- far higher than in most of its neighbors. Its citizens are also rapidly aging, meaning that by 2030, nearly a quarter will be 65 or older. Thus, if a graying Singapore accepts fewer foreign workers amid reduced interaction with the outside world, can it maintain economic growth?

According to the Ministry of Manpower, Singapore had 1,351,800 foreign workers as of June, of which 14% were Employment Pass holders -- professionals, managers and executives like the Indian engineer -- while another 14% were S Pass holders, or mid-level staff with skills. Almost all of the rest possessed a Work Permit, which includes laborers from lower-income countries engaging in construction and shipyard work as well as domestic helpers such as maids and nannies.

But from September, the minimum salary requirement for an Employment Pass applicant was raised to 4,500 Singapore dollars ($3,300) a month from the previous SG$3,900. That followed an increase from SG$3,600 to SG$3,900 in May. In the financial sector specifically, the threshold was set even higher, at SG$5,000, from December. Visa applicants in senior positions must earn even more.

Similarly, the minimum salary for the S Pass was also raised to SG$2,500 from October, compared with SG$2,400 previously.

"You may of course adjust your EP or S Pass employees' salaries upon renewal," Manpower Minister Josephine Teo told employers in a Facebook post explaining the new requirements. Still, the message was clear: "But consider the missed opportunities of building up your local employment, and the strong government support to do so," she said.

COVID-19 has clearly taken a big bite out of Singapore's economy, which is, according to the government, expected to shrink between 5% and 7% this year. The unemployment rate for citizens rose to 4.9% in September compared with 3.3% last December, as core sectors such as tourism have been damaged.

Sentiment against non-citizens may also have been fueled by the country's political opposition -- traditionally critical on the issue of foreign workers -- which won a record 10 seats in parliament in the July general election. While recognizing their economic contribution, some Singaporeans attribute the country's high living costs to foreigners.

Foreign workers have for decades played a key role in the economy of the small island nation of about 3.5 million citizens. Securing foreign investment has been a key growth strategy since independence in 1965. The government has built a well-developed transport infrastructure, education system and business-friendly tax regime, all attractions for foreign companies and workers.

In 1991, Singapore had about 300,000 workers who were neither citizens nor permanent residents, according to government statistics. That more than doubled to 641,000 in 1998 and reached 1 million in 2008. At the same time, the economy continued to grow more than 5% annually until early this decade, excepting periods such as the Asian financial crisis in 1998. Singapore was often called Asia's "economic miracle."

"We have thrived by having a combination of domestic talent, augmented by foreign expertise," Eugene Tan, associate professor of law at Singapore Management University, told Nikkei Asia. But reliance on the foreign factor means that the pandemic-induced labor tightening could further slow growth.

Hiromasa Matsuura, a Singapore-based economist at Mizuho Bank, said there are two ways the restrictions could weigh on the economy.

"If a foreign worker's role is not successfully replaced by a local, the growth of the total labor force would weaken, resulting in a negative impact on the economy," Matsuura told Nikkei. The other, he said, is that a decline in foreign workers would mean a slowdown of total population growth, which would lead to shrinkage in consumption.

"If employers' needs and local job seekers' needs do not match, a tightening of foreign labor rules may not be very effective," Matsuura stressed. "The replacement of foreigners with locals should take place in tandem with the growth of relevant human capital."

The business reaction so far suggests there is no guarantee of more jobs for locals.

"If there was someone in the local market that could do that work, the companies would love to hire them because locals are cheaper typically," an Australian manager at a financial company told Nikkei. "But there's a reason that they keep bringing in expats. The local skill set doesn't have what's required or what the companies are looking for."

To be sure, with its small population, Singapore is less likely to have the large talent pool employers seek in comparison to more populous nations.

According to a survey released in September by the American Chamber of Commerce in Singapore, 53% of responding companies said they face difficulties finding locals with "technical skills and knowledge essential for the job," while 49% said a lack of "creativity and critical thinking" results in foreigners getting hired. 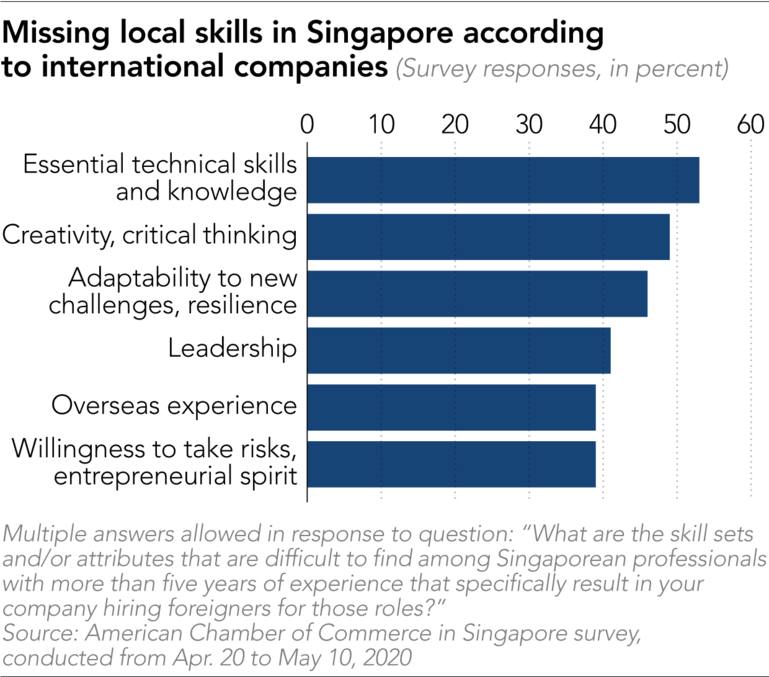 A French entrepreneur who started a business last year offered a similar view, citing the need to prioritize skills and knowledge in bringing employees on board. "We cannot always hire Singaporeans even though we want to," he said. "If Singapore makes it harder and harder for foreigners ... it might lose its openness and be less attractive for investments or for people. And everybody loses."

And while the visa move has accelerated the trend, foreign workers were already starting to decline amid the pandemic.

Government statistics show that the number decreased by about 70,000 from December to June, likely meaning that many left the country due to layoffs or relocations.

The country's total population -- citizens and foreigners -- shrank for the first time in 17 years in 2020, standing at 5.68 million, down 0.3% from the year before. Meanwhile, the ratio of citizens aged 65 or older rose to 16.8% this year, up from 10.1% 10 years ago, suggesting no huge growth of the local labor force is likely. 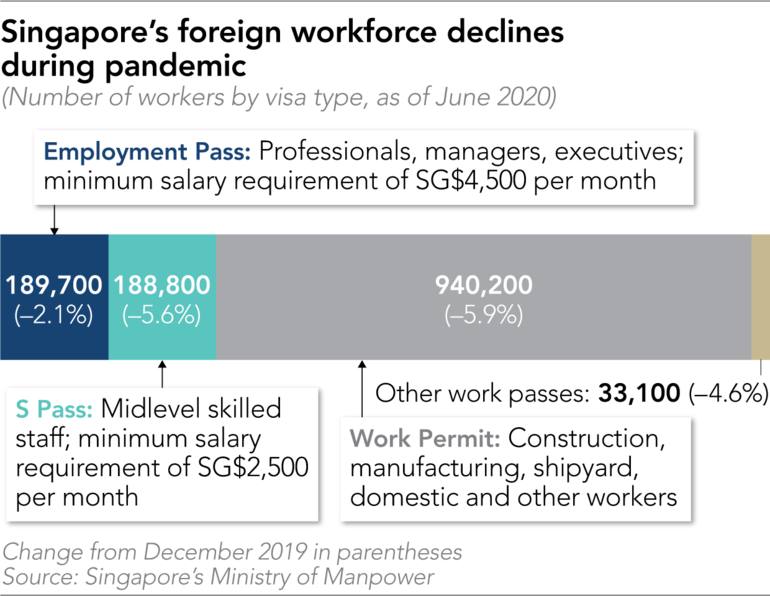 Now, with the pandemic persisting, the government is internally focused, promoting the digitalization of businesses and reskilling of local workers to improve productivity. It has also rolled out support programs to help employers keep workers.

Still, over the long term, having the right number of non-citizens and enticing foreign investment, which often comes with external talent, will likely remain vital.

"Our population is small, it is not growing very fast," Prime Minister Lee Hsien Loong said in parliament in September. "Soon it is going to level off. To grow our economy, we have no choice but to top up with foreign workers and work pass holders," Lee said, stressing that Singapore remains welcoming to outsiders.

He also said that several global companies are considering moving their regional headquarters to Singapore due to political uncertainties in other places, which would contribute to the country's post-pandemic growth and eventually create jobs for locals. Singaporean Prime Minister Lee Hsien Loong, pictured on Oct. 6, has stressed, "To grow our economy, we have no choice but to top up with foreign workers and work pass holders."   © Reuters

Yet, some may also relocate elements of their operations due to travel restrictions that have undermined Singapore's status as a regional hub. According to a June survey by the Japan External Trade Organization and the Japanese Chamber of Commerce and Industry in Singapore, one company said it considered moving its regional base to neighboring countries such as Thailand. Another said it may move some roles currently in Singapore elsewhere.

But Singapore is also eager to expand on its "travel bubbles" with various economies including China, Hong Kong and Malaysia, maintaining a certain openness while trying to control the spread of the virus.

"We shouldn't be sending the signal that Singapore is turning inward," said Tan of Singapore Management University. "Singapore has always thrived by being open to the world, open to people, finance, ideas, movement of goods and services."

Another key to attracting talent when the economy improves may be managing local sentiment toward outsiders.

With his home country still reporting tens of thousands of new COVID-19 infections daily, the Indian engineer said finding a job there is no certainty. "If given a choice between India and Singapore, I would definitely prefer to work in Singapore," he said.

But he added: "If you're made to feel unwelcome in a country, no matter what the financial incentives are, you still have to think about it."