Asian youth face the prospect of a bleak future as the effects of lost opportunity and social isolation resulting from policies to limit the spread of the novel  coronavirus harken the emergence of a "lockdown generation."   © Illustration by Michael Tsang
Asia Insight

With university experience on hold, traditional path to success gets a rethink

TOKYO/SINGAPORE -- Before enrolling in a Tokyo arts college for the April school year, one 18-year-old Japanese woman had expected student life to be full of new encounters combined with rigorous practical training. But instead, the novel coronavirus has forced her to sit at home every day for months in front of her computer taking classes online.

Now, as businesses and even primary and secondary schools restart, many higher learning institutions, including hers, remain closed in the name of preventing infections. "It is natural to feel that we [university students] are the only ones left locked up and being sacrificed," she told the Nikkei Asian Review, asking to be identified by her Twitter handle, maki.

Her emotions found an outlet in July after she saw an online event promoting the situation at universities under the hashtag "college student life is also important." Maki's post, written and illustrated in the style of a manga, or comic, recounted her increasing isolation and loneliness, drawing over 417,000 "likes" on the Japanese-language version of the social media platform.

It includes depictions of her struggles with the mechanics of online study, tearful frustration at seeing companies and schools reopen, bewilderment at a government campaign to encourage domestic travel and the reality of having to pay the same amount of tuition for remote learning. And she laments the increasing numbers of students interrupting their studies, withdrawing entirely and even battling depression, concluding, "How long must university students endure this?"

A Japanese education ministry survey showed that some 24% of 1,012 responding universities offered remote classes only as of July 1. That translates into roughly 100,000 first-year students or more in the country facing similar issues as maki, with many forced to lock themselves up in their small rooms, unable to seek human contact, advice or solace. Like her, many haven't even been on campus since classes started.

The loneliness can be overwhelming, especially for those leaving hometowns, families and high school friends, many for the first time. And the situation isn't any better for their seniors with less financial resources to support their studies, limited academic options due to travel restrictions and bleak job prospects upon graduation.

Maki's feelings are representative of many Asian youths whose future expectations have been shattered by the pandemic.

They are being characterized as part of a potential global "lockdown generation" that could be scarred for the rest of their lives by the dark formative experience they face.

Muslihah Mujtaba returned to Singapore after finishing her theater degree in the U.K. late last year, hoping to contribute to the local arts scene. She immediately started working in a theater company and became a freelancer in February, expecting to get more arts related jobs in education.

But as the coronavirus caused show cancellations, Mujtaba ended up working gigs delivering food until she found a digital content job in June recording and editing dance performances for schools. "I was very disappointed," she said, stressing it all happened just as she had graduated and was full of "big dreams." Months of business restrictions and weakened company finances have impacted jobs. In the Asia-Pacific region, working hours dropped 13.5% in the second quarter from the last quarter of 2019, according to the Geneva-based International Labor Organization. That is equivalent to 235 million full-time jobs.

ILO research warned in May that global youth are especially vulnerable to the COVID-19 crisis because they are hit by "multiple shocks including disruption to education and training, employment and income losses, and greater difficulties in finding a job." And it raised an alarm: "There is a risk that they will be scarred throughout their working lives -- leading to the emergence of a 'lockdown generation.'" In India, over 27 million youths in their 20s lost jobs in April, according to a report by the Centre for Monitoring Indian Economy, a think tank. Japan's jobless rate for those aged 15 to 24 hit 5.1% in May, the highest among all age groups.

There are currently about 1.5 job openings for every corporate job-seeking university student in Japan aiming to graduate in 2021, according to human resources company Recruit. And while that may not look bad on the surface, students aspiring for jobs in certain sectors need to rethink their dreams.

"Airlines, travel, hospitality and restaurant businesses were hit hard by the coronavirus, and are canceling or postponing hiring plans," said Zen Masumoto, who heads the Research Institute for Graduate Recruitment at Recruit Career.

The current public health crisis also exacerbates employment inequalities, said Masahiro Yamada, a sociologist at Japan's Chuo University. "The gap that has been gradually widening since the mid 1990s would expand further due to the coronavirus without any policy change," Yamada said.

Discrepancies in access to digital infrastructure may also loom large for young people, according to a report by the World Economic Forum and Singapore-based internet services group Sea. Based on a study in six Southeast Asian countries, it said that those without college degrees and residing outside capital cities "were far more likely to face difficulties with remote working or studying remotely during the pandemic." Despite harsh conditions facing Asian youth, the technological shift of digitization, accelerated by lockdown restrictions, also means that there are abundant resources to obtain new skills and take on new challenges for those with internet access.

Shiira Imada, a Japanese undergraduate, took a leave of absence last year from the University of Miyazaki to study space engineering in the U.S. When Imada's plan to stay until August was cut short in March, he came back and searched for ways to continue pursuing his dream of contributing to Japan's space development.

He eventually started taking an online open course offered by the Massachusetts Institute of Technology. "The quality is very high and I am taught by a former NASA astronaut," Imada said. "This will definitely be good for my future."

Thang Leng Leng, an anthropologist at the National University of Singapore, has noticed that some young people starting jobs will also try to do something else online, such as a business. "They see it as a sideline in case they get retrenched from the job because they are still unsure about the economic situation," she said. Hiroto Tsuda, a researcher in the New Generation Lab at Japanese advertising agency Hakuhodo, cites the internet's capacity to provide avenues for personal fulfillment as a positive. "Many people are thinking about being a YouTuber or about expressing themselves online," Tsuda said.

Despite such pluses, there are worries about the impact of lockdowns and lack of face-to-face communication on social development.

As people get used to communicating online and switching off images or voices as they like, they could actually end up with fewer chances to communicate with strangers, according to NUS's Thang. "So the kind of ability to develop a social network and all that could be reduced," she said. 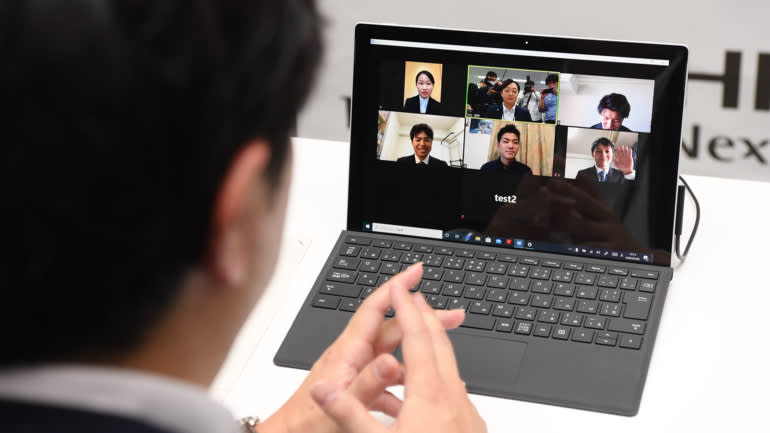 A representative for a Japanese company speaks with job-seeking students online. (Photo by Kento Awashima)

Results of a survey released in May by Japan's health ministry and messaging app LINE showed cause for worry: a total of 14% of responding students said they are "depressed or feeling down for almost the entire day every day."

Many universities have set up website pages to inform students about mental health and available support. Osaka City University started offering online mental health tests from June and found "there are many" who needed help, according to Takahiro Yoshikawa, head of its health and medical center.

Amid such concerns over student isolation, Koichi Hagiuda, Japan's education minister, said at a news conference this month that he is asking universities to hold some classes face-to-face. 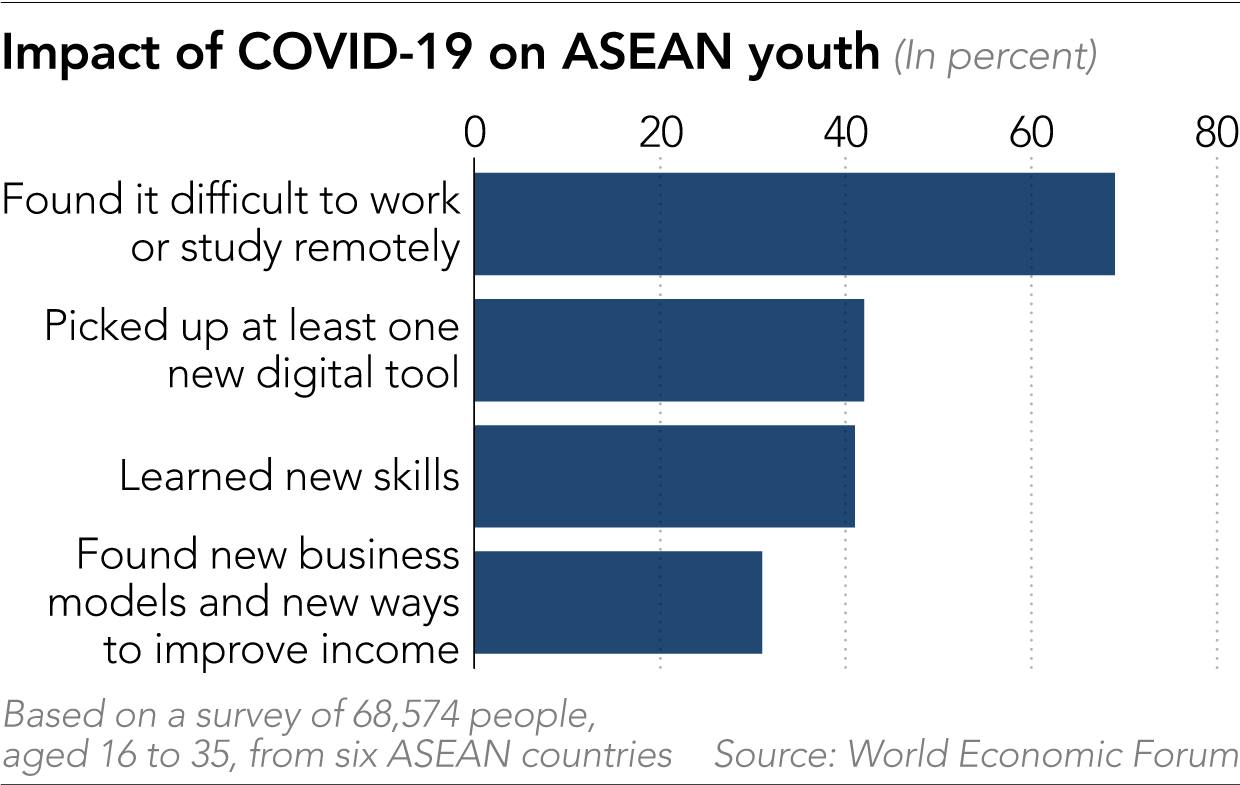 One thing is clear -- the young can no longer just follow the path of their predecessors.

"I think in many Asian societies, especially advanced economies like Singapore, we have been brought up on a certain narrative -- study hard, get good grades and get a good job," said Ng Chia Wee, a third-year student at NUS, describing what has been a safe and traditional road to success. But now Ng feels less risk averse due to disruptions caused by the pandemic and technology which have created more of a sense of "nothing to lose."

Kaito Shigemasa, a Japanese postgraduate student, also said the pandemic has upended old thinking. "Throughout our education we knew and aimed at what was right" and "those who did right won in things like entrance exams," Shigemasa said. "But the coronavirus taught us that, as the world constantly changes, we need to make our own decisions."

That doesn't mean, though, that youth should be cast adrift and left without support. NUS's Thang said universities should change the way they teach so students "better prepare themselves for work and become more resilient" to future uncertainties. One way to do so is, she said, is widening the general education curriculum. A female student hunting for a job crosses a Tokyo street. (Photo by Kai Fujii)

Walter Theseira, an economist at Singapore University of Social Sciences, says that the dramatic short-term downturn in the job market could be addressed through measures such as encouraging employers to take on trainees to reduce hiring costs while providing opportunities for youth to acquire skills.

But in the longer term, "policymakers have to look at the skills training pathway for the youth to better understand if these are well matched to industry needs," Theseira said. "Longer term skills mismatches have to be addressed through educational and training sector reforms."