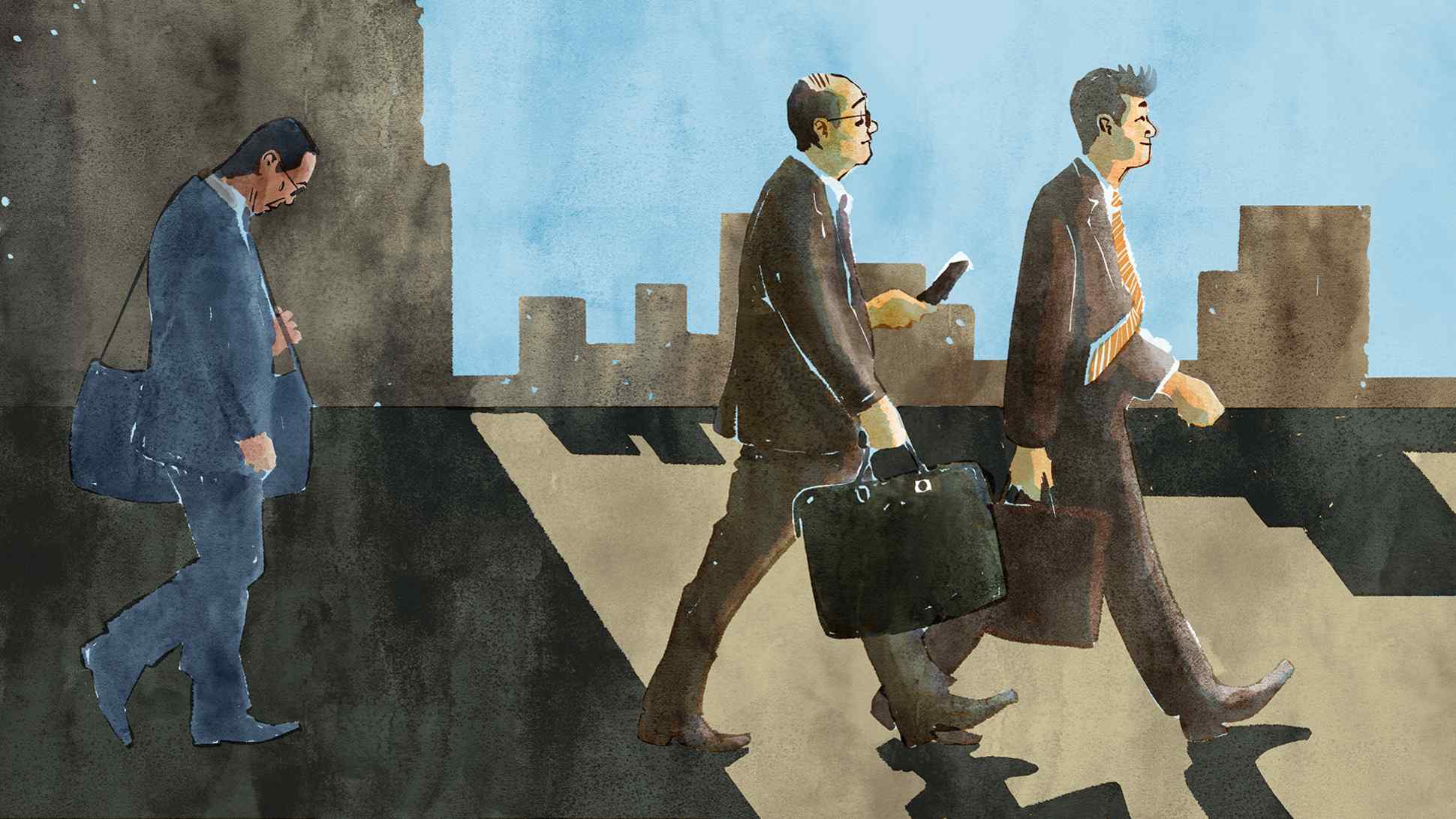 Japanese who joined the workforce after the bubble face bleak prospects, since the corporate ladder is crowded with colleagues 10 years older. (© Illustration by Luis Mendo)
Asia Insight

TOKYO -- When Japanese Prime Minister Shinzo Abe was re-elected head of the ruling Liberal Democratic Party last month, he made a familiar pledge. His government, he said, would finally beat the deflation that has plagued the country for decades.

New threats, like the escalating U.S.-China trade war, will make that old battle even more difficult to win. But if Abe fails, it may be because the economy's fate was sealed long before he became prime minister, when Japan "lost" a generation of workers who ought to be driving the economy today.

"In our company, there just aren't any positions for us to get promoted to," said a 40-year-old man working for a major financial institution in Tokyo. He and colleagues around his age frequently complain about their dim prospects for earning promotions and raises, he said.

For them, it is difficult not to be resentful of the generation about 10 years older, who graduated from college in the late 1980s and early 1990s when the economy was flying high. In those heady bubble days, landing a job at a big corporation was a breeze.

And because so many members of the bubble generation are still climbing the ladder, the man said, his turn is still a long way off.

Japanese workers currently in their mid-30s to mid-40s are known collectively as the "lost generation," or the generation of the "employment ice age." They started job hunting after the economic bubble collapsed. As Japan slipped deeper into a serious financial crisis in the late 1990s, companies tightened up on hiring new employees to keep the ones they already had.

The man at the financial institution said 100 colleagues in their late 40s and early 50s are ahead of him -- more than double the number of employees in his age group. He believes his generation "carries a heavier workload" because of the company's demographic imbalance.

Data suggests the man is not imagining things. Research published by the Ministry of Health, Labor and Welfare in February shows that the proportion of managers in their 40s is declining. Only 8.4% of male workers aged 40 to 44 were section heads in 2017, down 3.6 points from 2007. This is not a negligible segment of the population. Roughly 17 million, or just under 15% of Japanese, fall into the lost generation, and they are under pressure to save more and spend less. In turn, this puts a drag on both growth and prices, bedeviling Abe and Bank of Japan Gov. Haruhiko Kuroda, who has been trying to nudge inflation toward a 2% target.

"People in their 40s are more likely to spend on houses or children's education, but that is being suppressed," explained Naoko Kuga, senior researcher at the NLI Research Institute. "Avoidable spending, such as family vacations and dining out, is also suppressed."

Normally, when workers see no avenue to promotion, they have the option of seeking a new job with a better salary. But this, too, is a tall order in Japan, due to the country's unique hiring practices and wage systems.

And although lifetime employment is less pervasive than it used to be, "years of continuous employment are still important for earning a higher income," noted Yuji Genda, a professor of labor economics at the University of Tokyo's Institute of Social Science.

All of this means that, in general, midcareer hires are at a disadvantage compared with workers who joined a company fresh out of college and stayed for the long haul. 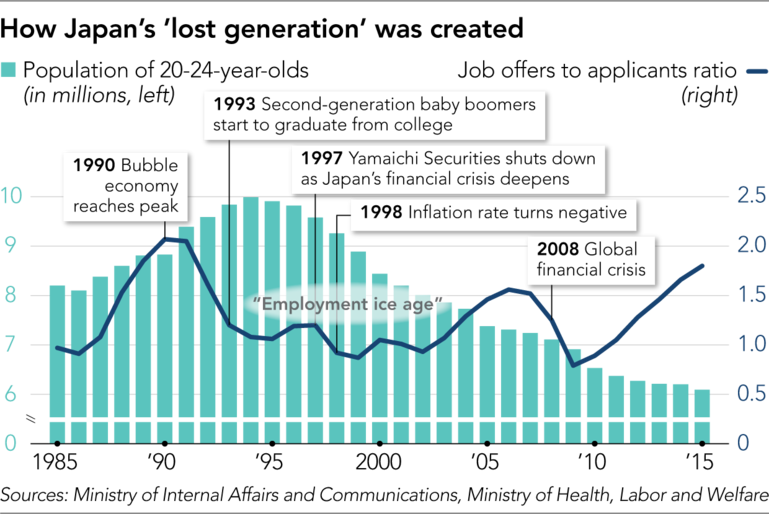 Many workers are stuck not only because they are blocked by predecessors and see no alternatives, but also because they lack the skills they need. Genda said companies did not put sufficient resources into training personnel amid the recession of the 1990s and thereafter. His research shows that, compared with other age groups, members of the lost generation feel they did not learn enough early in their careers to either move up the ladder or switch jobs.

Still, workers locked in dead end but permanent positions could be considered the lucky ones.

Less fortunate members of the lost generation have been getting by with part-time or contract positions. Incomes are low, conditions are precarious and the more time passes, the more difficult it is for these people to break the cycle and improve their lives. Individuals without regular, permanent jobs are far less likely to marry or have children.

Growing awareness of the problem has given rise to a nascent support system. The Tokyo Metropolitan Government, for instance, backs a workshop program for men and women ranging in age from 30 to 44. For two months, participants learn the ropes in a virtual workplace set up for training. They also visit companies to gain a better sense of business and get a feel for work environments. Throughout the program, there is an emphasis on working in teams.

During a session in late September, around 20 attendees took turns giving presentations about companies they had visited over the course of the workshop. Some spoke like nervous students, while their peers listened and offered feedback.

One woman said the workshop was "a good way to fill the blanks" in terms of skills. She had spent most of her career working on contracts, with only two years as a regular employee.

Another attendee, who had never held a permanent job, joined the workshop hoping to find out why she had been unable to pass recruitment interviews. "I learned that I need to act on my own initiative and take responsibility," she said. 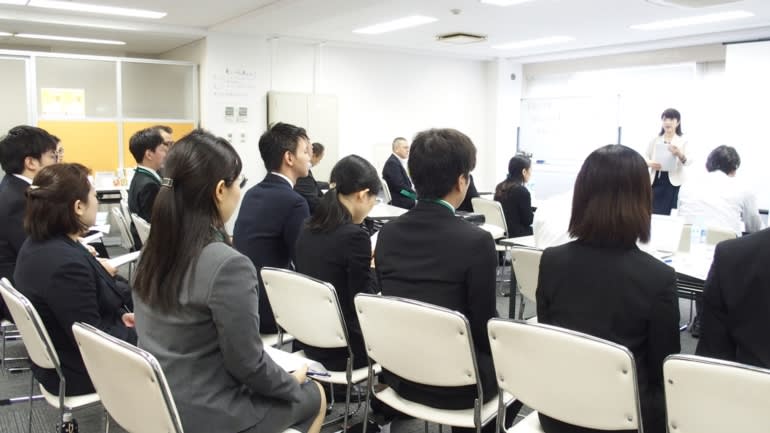 Job seekers, ranging in age from 30 to 44, attend a skill-building workshop in Tokyo in late September. (Photo by Akane Okutsu)

"Those who attend this program tend to have lost the confidence most workers have at their age," said Akira Nagasaka from the Tokyo Foundation for Employment Services, the organizer of the program. "We support them to learn communication skills and find a job where they can feel accomplished."

Last year, more than 90% of participants found employment within six months after the program. But they make up only a small portion of the people who need help. Some members of the lost generation have retreated to the very edges of society.

Genda noted that the ice age years were also when many Japanese gave up on studying or finding jobs and became shut-ins. It was after this generation hit the job market that the term NEET, which stands for "Not in Education, Employment or Training," became a buzzword.

Now, more than two decades after the employment deepfreeze set in, there is another concern besides the dampening effect on consumer spending and prices.

Unable to hold down steady jobs, untold numbers of 40-somethings are living with their 70-something parents, supported to varying degrees by their pensions and savings. But what will happen after their parents are gone? One media report estimated that caring for the ones left behind could cost up to 30 trillion yen.

That might be the tip of the iceberg. Kuga of NLI Research sounded the alarm over the social security system. "It would be serious if members of the ice age generation remain in nonpermanent positions," she said.

The tragic irony is that the gravity of the problem is crystallizing just as Japan faces its most serious labor crunch in decades.

Junichi Makino, chief economist at SMBC Nikko Securities, said that when it comes to pushing up wages, the tighter labor market mostly benefits younger generations rather than workers already on the payroll. "Employers are prioritizing higher pay [for the newcomers] to secure more employees," he said.

And while Abe's government looks to ease the labor shortage by opening low-skill sectors to more international workers, a significant portion of the lost generation is still out in the cold.