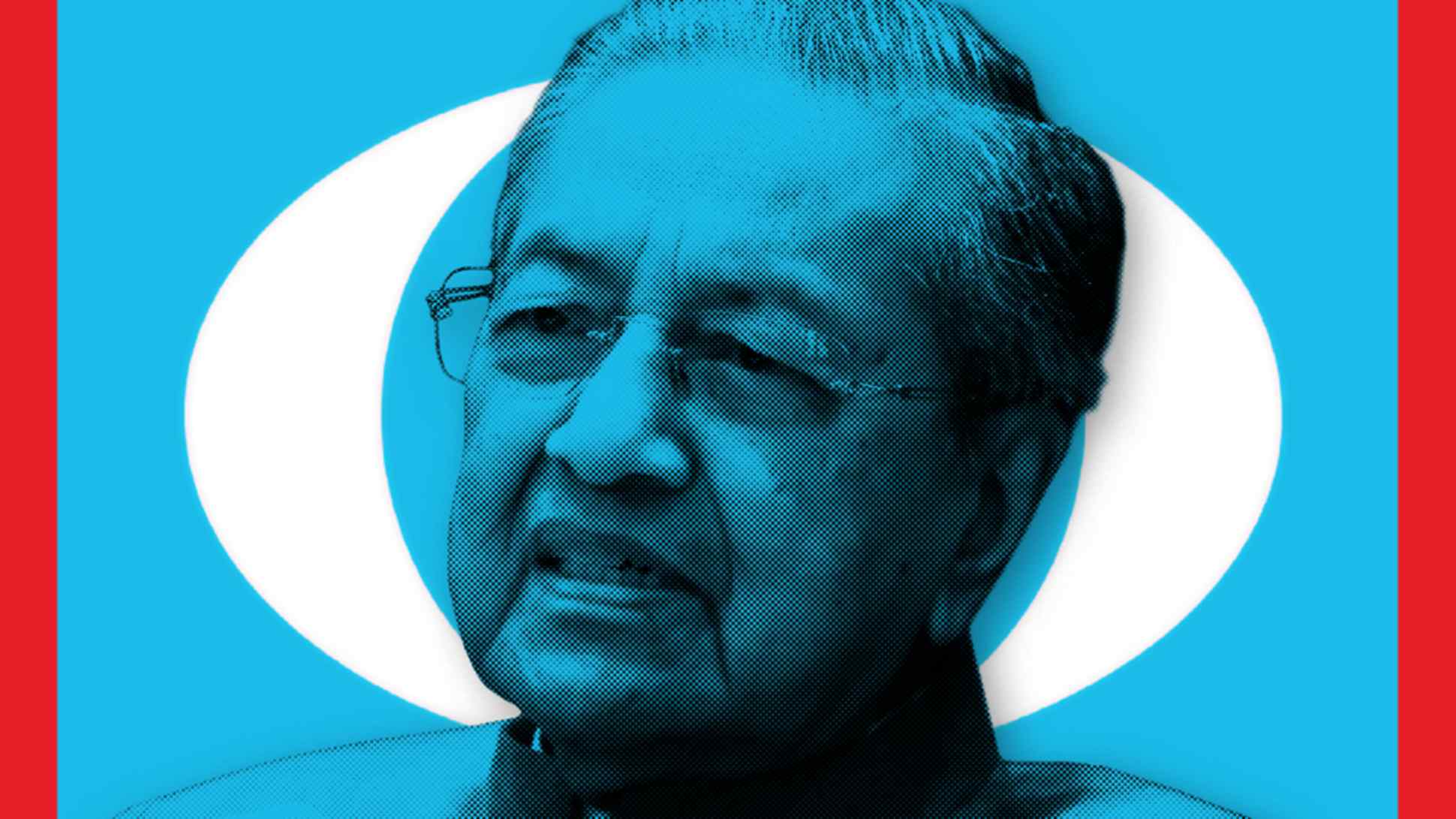 China, Singapore and Malaysians themselves all have questions

KUALA LUMPUR -- From the moment the results of Malaysia's election became clear around dawn on May 10, experts pointed out that returning leader Mahathir Mohamad was about to open a Pandora's box of challenges and risks. The euphoria of the unprecedented change of power has yet to fade entirely, but the box is at least ajar.

Mahathir's new government has fumbled a series of policy announcements, sending mixed signals about how it intends to follow through on its election pledges. One example is the replacement of the unpopular goods and services tax with a sales tax starting on Sept. 1.

The 6% GST, introduced in April 2015, was blamed for pushing up living costs. Mahathir decided to scrap it as soon as his Pakatan Harapan coalition came to power, but the plan has sown confusion among retailers and consumers alike.

The sales tax, which will vary from 5% to 10% depending on the product, will cover a narrower selection of goods and services. But with only a month to go, the scope has yet to be finalized. When the customs authorities released a list of exemptions on "big-ticket items," such as aircraft and cruises, consumer groups complained that these high-priced items ought to be taxable.

Finance Minister Lim Guan Eng stepped in to defuse the criticism. "The customs list is merely a proposal, and the ministry is of the view that luxury goods, including the so-called big-ticket items, should be taxed," he said.

Many voters who backed Pakatan Harapan were counting on it to stabilize, if not reduce, living expenses. The government has also reintroduced fuel subsidies to help offset higher oil prices. But the new tax, which is expected to contribute 21 billion ringgit ($5.2 billion) in annual revenue versus 44 billion ringgit from the GST, may not make life much easier for the average person. It all hinges on the final list and rates.

For now, after Mahathir's government cut the GST to zero, inflation in June declined to 0.8% on the year -- the lowest in over three years. Maybank Research expects private consumption to surge 7.3% this year, surpassing the 7.0% rise in 2017.

Retailers like Japan's Aeon say it will be difficult to determine the impact of the sales tax until the government provides a clearer picture. "Maybe there will be some impact on services," said Poh Ying Loo, the mall operator's executive director in Malaysia.

The government has also come under fire for making policy pronouncements without consulting stakeholders, in the broad sense of the term. It has proposed creating a third national automaker, yet the general consensus is that the country of 32 million does not need another one. The first, Proton Holdings, has gone through several bailouts over the past 30 years due to poor sales.

The Malaysian Automotive Association has expressed skepticism due to limited economies of scale.

"Our industry is only 585,000 units annually [by sales], and to do a national car project, you have to work with a world-class manufacturer that is willing to invest in Malaysia," said Aishah Ahmad, the association's president.

The country's roughly 200,000 ride-hailing drivers have been caught off guard, too, by a recent announcement of stricter rules. Singapore-based app operator Grab said it had hoped the government would hear its views first. 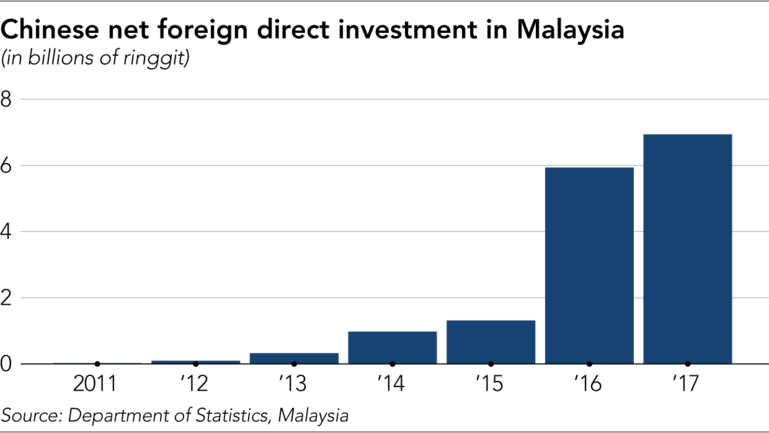 "We urge our driver-partners to bear with us as we engage with the government to better understand the regulations and work out the best solutions that will minimize the impact on them," said Sean Goh, Grab's country head for Malaysia.

Perhaps the biggest question mark, for the business community, is the government's policy on foreign direct investment. After all, the authorities have suspended at least three Chinese-led infrastructure projects pending talks with Beijing to reduce costs.

The government is determined to rein in expenses to maintain fiscal discipline, having redefined the national debt. Under the new calculation method, federal debt including liabilities stood at 1.08 trillion ringgit, or 80.3% of gross domestic product, at the end of last year.

The previous government of Najib Razak had left out interest payments and other liabilities, keeping the debt at a more modest 686.8 billion ringgit, or 50.8% of GDP. 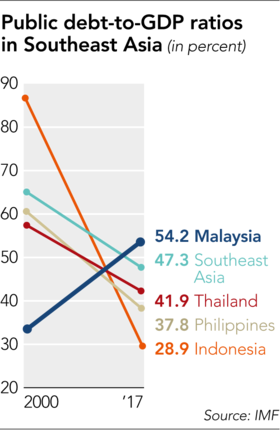 Chinese money flowed into Malaysia on Najib's watch, as debt-laden state fund 1Malaysia Development Berhad became enveloped in a misappropriation scandal. A Chinese state energy company bailed out the fund in 2015, and Kuala Lumpur returned the favor by accelerating approvals of projects linked to Beijing's Belt and Road Initiative.

This brings us to another risk factor in the new Mahathir era: the potential for Malaysia's relationships with countries like China and Singapore to deteriorate.

Mahathir is expected to lead a delegation to China in August for high-level talks on the infrastructure, the outcome of which may also signal Malaysia's diplomatic stance toward its powerful neighbor.

Most analysts expect Kuala Lumpur to move ahead with the projects as long as the costs are reduced. "It is in Beijing's interest to work with Mahathir to trim project costs in a way that enables both governments to save face," said Peter Mumford of risk consultancy Eurasia Group.

Mahathir irked Singapore by calling for the cancellation of a high-speed rail project that would connect the countries. He backed off after Singapore protested that Malaysia had not made its intentions clear; now Mahathir says the 350 km line is subject to further bilateral discussions.

But there are other sticking points. Since his election win, the now 93-year-old Mahathir has hinted at reviving a couple of thorny issues with Singapore: the countries' water supply agreement and the development of Middle Rocks, islets that were part of a territorial dispute. Mahathir's confrontational style, witnessed during his first run as leader from 1981 to 2003, is likely to cause a shift in the relationship with Singapore, according to BMI Research. Conflicting statements on the high-speed rail project and other issues suggest the ties have "cooled," the research arm of Fitch Ratings said, adding that trade is unlikely to be affected.

Despite the uncertainty, the Pakatan Harapan government remains popular, noted James Chin, a professor at the University of Tasmania. "The government is still in the honeymoon period," he said, pointing out that the reforms implemented so far have largely pleased the public. Chin said many Malaysians were "happy" that Najib was charged in connection with alleged embezzlement at SRC International, a unit of 1MDB.

At least two websites, one by online news portal Malaysiakini and another, Harapan Tracker, have been set up to monitor whether the ruling coalition is keeping its promises. So far, in nearly three months, the government has begun implementing eight of its "10 promises in 100 days."

Mahathir seemed to want to temper expectations recently when he said the manifesto was more of a "guide than a bible." For now, though, his government appears to have plenty of wiggle room. "Most Malaysians think kicking out [the Najib-led] ruling coalition without a riot was the best thing they have ever had," Chin said. "So, they will give a chance to Pakatan Harapan." The real long-term test for Pakatan Harapan does not center on Mahathir, but rather on his presumed successor, Anwar Ibrahim.

The consensus within the alliance is to allow Anwar, the de facto head of the coalition, to replace Mahathir as the nation's leader in two years' time. First, however, the former deputy prime minister needs to win a seat in parliament, a prerequisite for becoming prime minister.

Not only that, but Anwar will have to win Mahathir's trust. The two men have clashed in the past, resulting in Anwar being jailed on corruption and sodomy charges. Now, the leader-in-waiting needs to convince Mahathir to entrust him with his legacy.

In the meantime Anwar, who is recuperating from a back injury, has put himself forward as a candidate for the presidency of his party, the People's Justice Party, in what is sure to be a closely watched vote in November. "If given the mandate by grass-roots members, I will lead the party as its president after the PKR congress in November," Anwar said, using the party's Malay abbreviation.

The opposition, on the other hand, is fractured.

Its main party, the United Malays National Organization, is clinging to only a quarter of the 222 lower house seats with two smaller parties and, under new President Zahid Hamidi, has veered pro-Malay conservative. The UMNO-led Barisan Nasional, or National Front, was ditched by parties from the two Malaysian states in Borneo and is reportedly mulling a merger with the Malaysian Islamic Party (PAS).

The move, according to some observers, could turn the opposition into a right-wing camp that incites racism and promotes hard-line Islam -- views that have divided the country's multiethnic society since independence. 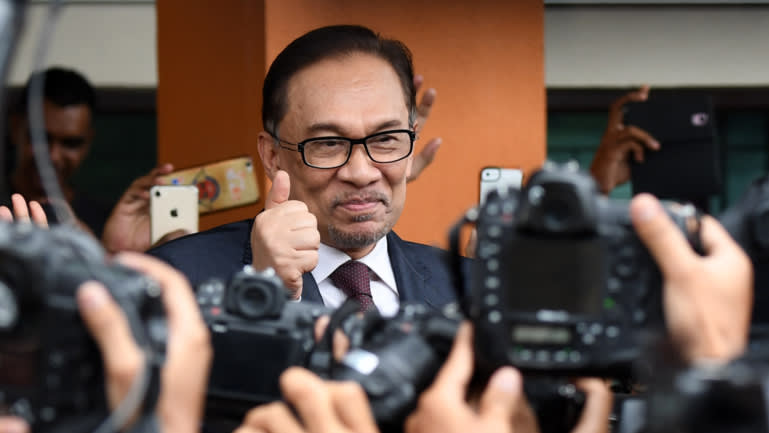 Anwar Ibrahim, de facto leader of the Pakatan Harapan coalition, is in line to succeed Mahathir as prime minister in about two years. (Photo by Takaki Kashiwabara)

It is too early to gauge the chances of the UMNO-led opposition making a comeback and posing a real challenge to Pakatan Harapan in the next election. But there is always the possibility that the new government will falter and create an opening.

Wong Chin Huat, a political analyst at the Penang Institute, a state think tank, said missteps are "excusable" at this stage but inexperienced ministers should avoid making hasty decisions simply to stay in the limelight.

"The public's patience will fade away and the honeymoon kindness the government enjoys now won't be there on its first anniversary," Wong said.

Many saw Mahathir's stunning election victory as a triumph for democracy in a Southeast Asia facing creeping authoritarianism. But if his coalition stumbles to self-destruction, a new desperation could sweep the region.