KUALA LUMPUR -- The year 2020 has long loomed large in the Malaysian mind.

"When I was in primary school, we were always asked to imagine and draw how Malaysia will be in 2020," recalled Hanafiah Ali, now a 31-year-old doctor. "I used to draw robots and flying cars."

Prime ministers, too, pegged high economic aspirations to this year, partly counting on an influx of foreign investment. But now that 2020 has dawned, the economy is plodding along at only a moderate pace, investors are not exactly beating down the doors, and an unresolved power struggle at the very top of the government threatens the Malaysian dream.

Back in 1991, in his first long run as prime minister, Mahathir Mohamad introduced Vision 2020 -- a plan to build a self-sufficient industrialized nation. Almost two decades later, successor Najib Razak set his own goal for the nation to achieve high-income status by 2020. After storming back to power in May 2018, Mahathir called for more well-rounded development, beyond the pursuit of the World Bank threshold. He wanted Malaysia to graduate from its current "tiger cub" league and join the "Asian tigers."

That has proved easier said than done.

Some experts say Mahathir started his second stint as leader on the wrong footing. He and his council of ministers painted a negative picture of their country's economy and finances, blaming all of the problems on Najib and the scandal-wracked state fund 1Malaysia Development Berhad.

Their strategy, it seemed, was to keep the public fuming and maintain the support that carried Mahathir to his historic election victory. They may have overplayed their hand. "The government overamplified the 1MDB scandal and the country's debt without thinking that it would backfire," said Hoo Ke Ping, an independent economist.

Finance Minister Lim Guan Eng, soon after his appointment in May 2018, shocked the business community by revealing that the national debt stood at 1 trillion ringgit ($243.7 billion at the current rate). This was far above the 686.8 billion ringgit Najib's government reported at the end of 2017.

The discrepancy certainly put another dent in Najib's reputation, but the enormous sum also raised fears of a potential default and gave investors a reason to think twice.

Gross domestic product growth has not topped 5% since the April-June quarter of 2018, when the economy expanded 5.3%. Investors appeared even warier in 2019: Foreign investments in manufacturing projects totaled $3.5 billion in the first nine months, well off the pace in 2018, when the full-year amount came to $9.7 billion.

The debt pressure has eased somewhat, but there are other reasons for foreign investors to hold back. At the top of the list is the uncertainty over the promised, impending transition from the 94-year-old Mahathir to his nemesis-turned-ally, Anwar Ibrahim.

Hoo, the economist, said the lack of a specific timeline for the handover worries existing and potential investors alike. "The guessing game, whether or not the transition will be smooth, is keeping capital away from Malaysia," he said. "The equity market, particularly the stock market, will be underperforming because of this situation."

Bloomberg data shows foreign investors sold $2.7 billion worth of Kuala Lumpur equities last year -- one of the biggest sell-offs in Asian markets, though less than the $2.9 billion dumped in 2018 and record $4.8 billion exodus in 2015.

The transition drama comes as public support for Mahathir's government wanes over unpopular decisions and unfulfilled campaign promises. Pundits also suspect Mahathir may not pass the reins to Anwar anytime soon, despite the prime minister's repeated assurances that he would do so in a timely manner, likely within a couple of years of the May 2018 election.

Mahathir is believed to prefer Azmin Ali, a deputy and erstwhile ally of Anwar, as a successor. Azmin backers have been driving rising opposition to Anwar within their own People's Justice Party.

If Mahathir stalls on relinquishing power, it would likely hurt the ruling coalition's chances of winning the next election, due in 2023. Nevertheless, in a recent interview with Reuters, the prime minister said he intends to stay on until the Asia-Pacific Economic Cooperation leaders summit in Kuala Lumpur in November.

Denise Cheok, an economist with Moody's Analytics, agreed that the transition question is creating an uncertain business environment. "Transparency in the leadership transition would help manage investor expectations," she said.

Yeah Kim Leng, economics professor at Sunway University Business School, said that it is difficult to gauge how much the Mahathir-Anwar issue has contributed to the "wait and see" mood among local and foreign investors, but that most market players and analysts cite it as a risk.

"Greater clarity on this issue will certainly remove a key impediment to the fast-improving attractiveness of Malaysia as a key investment destination, not least because of the new government's commitment to good governance, transparency and rule of law," he said. 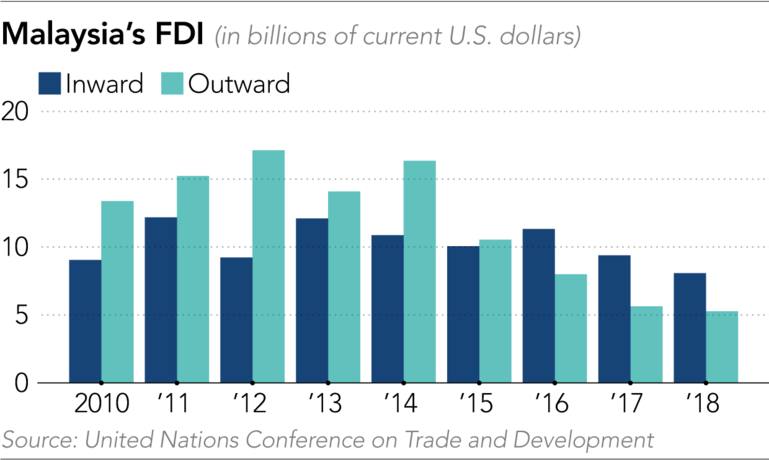 A stockbroker in Kuala Lumpur said foreign interest in Malaysian stocks has been more encouraging of late, but that "they are still afraid to lock in investments."

The general economic outlook is lukewarm.

Moody's Analytics expects Malaysia, together with the rest of Southeast Asia, to benefit from a cooling of the U.S.-China tariff battle thanks to their so-called Phase One trade deal. It projects 4.1% GDP growth for Malaysia in 2020, while the World Bank forecasts 4.6% for 2019 and 4.5% for 2020.

Economists agree that Malaysia should see stronger exports this year, particularly in the electronics sector, along with commodities such as palm oil, liquefied natural gas and crude oil. Domestically, the revival of suspended infrastructure projects following a government review should buoy the construction sector. New residences rise in Forest City in Johor, in the south of Malaysia. The construction sector is expecting a good year in 2020.    © Reuters

This is especially true in "Kuala Lumpur, where it offers high-quality residential products at lower entry costs compared to some of the other Southeast Asian countries due to the exchange rate," said Joanne Kua, managing director of property developer KSK Land. "A large majority of overseas investors focus on the KL city center, as the developments within this area are often of world-class standards."

The government is also pinning its hopes on tourism, which accounts for about 15% of GDP. It has declared 2020 "Visit Malaysia Year," with travel agencies going all out on promotions. The goal is to attract 30 million visitors this year, and collect receipts of almost $25 billion. Last year's totals are not out yet, but there were 20.1 million arrivals in the first nine months.

As part of the tourism drive, the government recently granted Chinese and Indian travelers visa-free entry for 15-day visits throughout this year.

The government hopes to attract more middle-class and wealthy visitors from these huge countries. Rani Chelliah, a taxi driver who picks up passengers at Kuala Lumpur International Airport, has been seeing fewer well-heeled tourists coming through the capital. "Nowadays, most of my clients are laborers from Bangladesh, Indonesia and Pakistan who are here to work," she said.

But enticing tourists, too, could depend on a prompt and smooth switch from Mahathir to Anwar.

The region has seen power tussles lead to unrest before, including in Malaysia in September 1998, when Mahathir sacked Anwar as his deputy prime minister over what many saw as trumped-up sodomy and corruption charges. The last thing vacationers want to see is chaos in the streets.