As critical coverage builds, will former 'enemy' of journalists set a positive example?

KUALA LUMPUR -- Only a year ago, publishing the column would have been almost unthinkable for a mainstream Malaysian newspaper.

"Unfortunately," he wrote, "while the majority of them are enthusiastic in discharging their duties for the country and the people, a few of these ministers are plagued with absurdity and arrogance."

It was Mahathir himself who paved the way for printing the piece.

After his coalition's historic victory in the May 9 election, Mahathir promised a freer press and swiftly removed a repressive anti-fake news law enacted by his predecessor, Najib Razak, just weeks before the poll. The law had been used to harass Mahathir with investigations.

"Even if the government does not like to hear it, [the press is] free to report," Mahathir said days after defeating Najib's National Front.

Media organizations that were close to the former ruling coalition have taken Mahathir up on the offer.

The Star, the largest English daily by circulation, has gone after the foreign minister in particular, blasting him for using abbreviations in Twitter posts and official speeches. "No matter how exposed anyone is to foreign affairs, it is still strange to hear and read tongue twisting acronyms in dealing with diplomacy on a daily basis," Mergawati Zulfakar, a senior columnist, wrote on Aug. 14.

Ordinary people and businesses have noticed that the media is no longer muzzled, and are adjusting their own habits accordingly.

"People are following closely on politics now," said Norman Goh, an editor with independent -- and traditionally more outspoken -- news website Malaysiakini. One telling sign, Goh said, is the increase in followers on the portal's social media platforms. "Readers are looking to participate in the conversations."

The subscription-based outlet was already one of the most popular sources of reporting on the May election, attracting about 17 million readers at one point. But it has felt a sea change since the vote. Advertisers who once steered clear of Malaysiakini for fear of offending the establishment have returned, the group said.

Word of Malaysiakini's popularity has reached even China, which sent a top official to visit the site's office on the outskirts of Kuala Lumpur. Guo Yezhou, deputy director of the Chinese Communist Party's international liaison department, stopped by in late July for a firsthand look at the news operation, said Steven Gan, Malaysiakini's editor-in-chief.

The new atmosphere reveals just how little freedom the media had before the power change.

Najib's history of scandals dates back to even before he became prime minister, including a murky case surrounding the murder of a Mongolian model, for which two of his bodyguards were sentenced to death. Yet media insiders say the local press was under strict instructions to refrain from linking Najib or his wife to any questionable dealings. 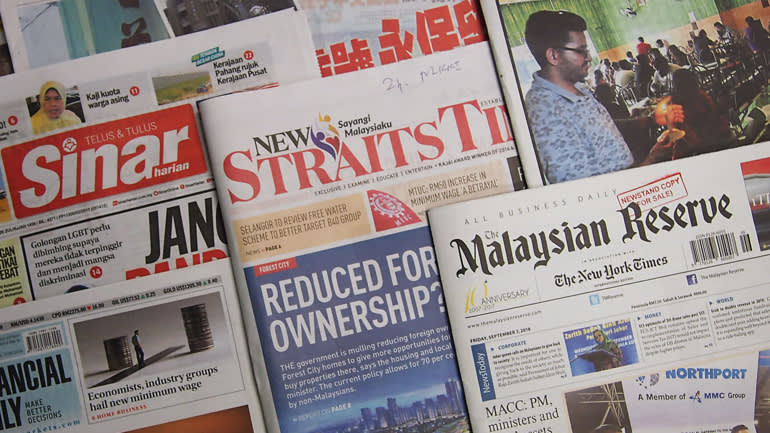 Many mainstream media outlets in Malaysia are controlled by political parties. (Photo by CK Tan)

The Najib government tightened its grip further after the explosive allegations in 2015 that Najib pocketed millions of dollars from state fund 1Malaysia Development Berhad. Editors were arrested and one independent media outlet, The Edge, was suspended. International reporters were deported over their relentless pursuit of the 1MDB story.

Local news organizations, many of them controlled by Najib's coalition, toed the line for fear of having their business licenses revoked.

The election not only changed the leadership -- it changed the climate of fear. To convince the public it is serious about press freedom, the government is thinking about capping the stakes political parties can hold in media companies, at 10%.

Yet a nagging question remains. Has Mahathir, a man once labeled an "enemy" of the media by the New York-based Committee to Protect Journalists, really become a reliable guardian of the press?

Analysts say it is too early to declare the Malaysian press free, despite the removal of the anti-fake news law.

Gayathry Venkiteswaran, an assistant professor who teaches communications at the Malaysian campus of Nottingham University, stressed that unless other laws affecting the media are repealed, there are no guarantees of freedom.

"Access to information may have improved slightly as the government seems open to the media," Gayathry said. "But such access is still on a case-by-case basis and not institutionalized." Mahathir has declared that the media is free to report even if the government does not like the content. (Photo by Keiichiro Sato)

Theoretically, Loo said, editors can be independent even if their papers are owned by a political party. "But the political reality in Malaysia tells a very different story, as the mainstream media have for decades generally favored the ruling party."

There are still some 35 laws that impinge on media freedom in Malaysia, according to Malaysiakini's Gan. The government, meanwhile, is talking about setting up a council for media independence.

While Gan -- who prevailed in several lawsuits brought by Najib's government over Malaysiakini's critical journalism -- wants to see the laws amended, he also wants reforms to ensure the independence of government institutions like the anti-graft agency and election commission.

"Therefore, even if new people come into power, they would not be able to inflict too much damage [on media freedom]," he told a forum in July. Even with more hurdles ahead, Malaysia's recent flirtation with press freedom could set an example for countries like Cambodia and Singapore, where there is little tolerance of news that could tarnish the ruling establishment.

Kazi Mahmood, an editor at the Khmer Times in Cambodia, said Malaysia could inspire a "media revolution" in Southeast Asia if Mahathir succeeds in removing political influence from the press.

"As challenging as it could be, civil society in Singapore may want to use Malaysia's example to raise awareness and [seek] improvement in civil liberties," Gayathry said.

When it comes to business, the shift in Malaysia has brought good fortune for some media organizations and hardship for others.

Malaysiakini, as it pulls in more income, is expanding its news delivery operations and making a reach for subscribers as far away as South America. But other players are cutting jobs. The Malay Mail, the country's oldest English tabloid, abandoned its print edition and went fully digital on Dec. 2, laying off one-third of its staff.

But people who know the company well said management shot itself in the foot by becoming a "de facto mouthpiece of Najib." The Mail's publisher is Siew Ka Wei, a businessman who also has an interest in chemical maker Ancom, of which Najib's brother Johari is a director. 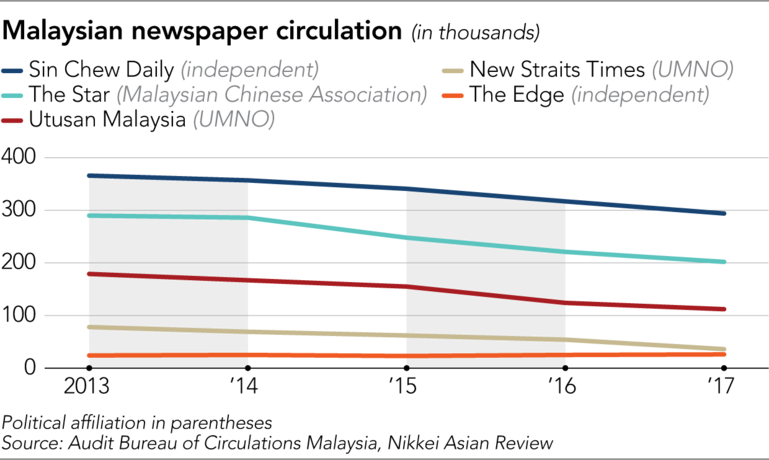 "The Malay Mail's failure is related to the Najib era, not to the lackluster sales and dwindling readership alone," a former editor said.

Utusan Malaysia, a Malay daily, instituted a plan in September to reduce its workforce by 800, from 1,500. The move came after it defaulted on bank loans in August.

Controlled by Najib's party, the United Malays National Organization, or UMNO, Utusan had for years relied on the government for financial aid, said one ex-minister. "In 2010, 2011 and 2012, I, as the information minister, had to render assistance through advertising to Utusan," Rais Yatim told a local news portal.

The New Straits Times, another UMNO mouthpiece, finds itself in limbo. Its owner, Media Prima, the country's largest media group, recently announced a sale and lease-back deal with state fund PNB Development for 280 million ringgit ($66.8 million). Proceeds from the transactions, which include the sale of the New Straits Times headquarters on prime land in Kuala Lumpur, will go toward debt repayment.

"From which side do we take instructions, Media Prima or PNB Development?" one veteran journalist at the newspaper asked.

Once a reputable broadsheet, the paper is a legacy of the British colonial government and traces its origin to 1845, just like Singapore's Straits Times. Under Najib, it favored the government but was critical of Mahathir's opposition.

"We are now an opposition newspaper," Abdul Jalil Hamid, the paper's CEO, told a staff town hall meeting a week after Mahathir's surprise victory. Reporters were told to give both the new government and opposition fair coverage.