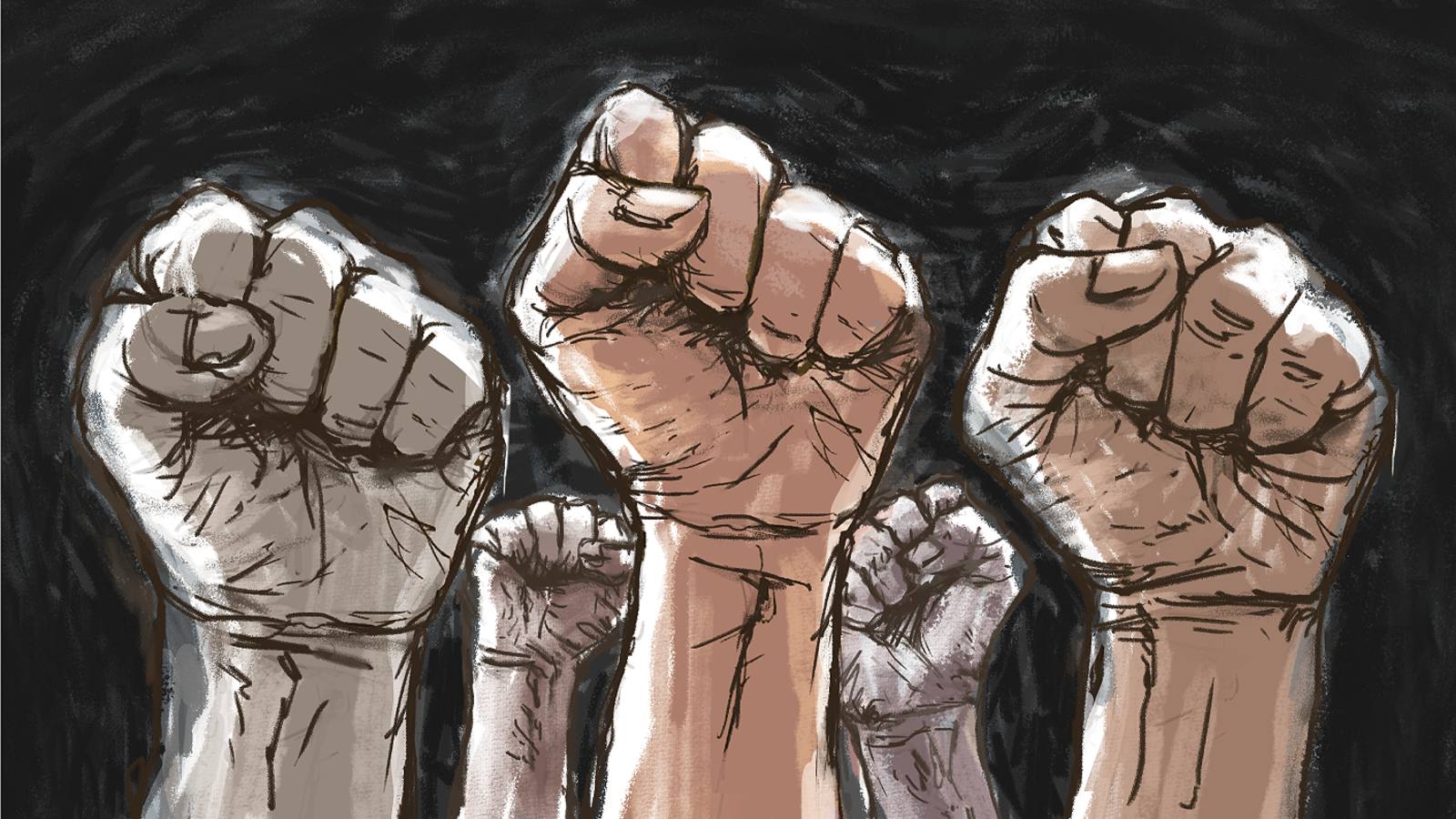 #BlackLivesMatter shines light on racism in Japan and across Asia Modi bulldozes toward election with health care for 500m people

NEW DELHI -- Driving a taxi in New Delhi earns Vikas Kumar 12,000 rupees, or $170, a month. Last year, he was forced to cobble together three times that sum to pay for his ill wife's medical treatment. So his opinion of "Modicare," Prime Minister Narendra Modi's ambitious plan to cover 500 million disadvantaged citizens with health insurance, is just what you would expect it to be.

"It is one of the best things for people like us," Kumar said.

Kumar shies away from free government-run hospitals due to the "never ending" waits and poor-quality care. But he can barely afford to take his wife and 2-year-old daughter to a private hospital.

"I had to shell out around 30,000 rupees last year when my wife was struck with dengue and typhoid fevers at the same time," he said. "It was not easy for me to arrange the big amount for treatment but I somehow managed with the help of my relatives and friends."

The program, officially called Ayushman Bharat - National Health Protection Mission, is to become the world's largest government-funded scheme when it launches on Sept. 25. Coverage is to be extended to 100 million low-income households, with annual payouts of up to 500,000 rupees. The beneficiaries will pay no fees, with the central and state governments shouldering the burden 60-40.

Put another way, 40% of India's population of over 1.25 billion is about to be insured.

"Very few people realized the massive size of the scheme," Modi said in an address to the nation on Aug. 15, India's 72nd Independence Day. "If I combine the populations of America, Canada and Mexico, then the number of beneficiaries of the Ayushman Bharat program will be nearly the same." 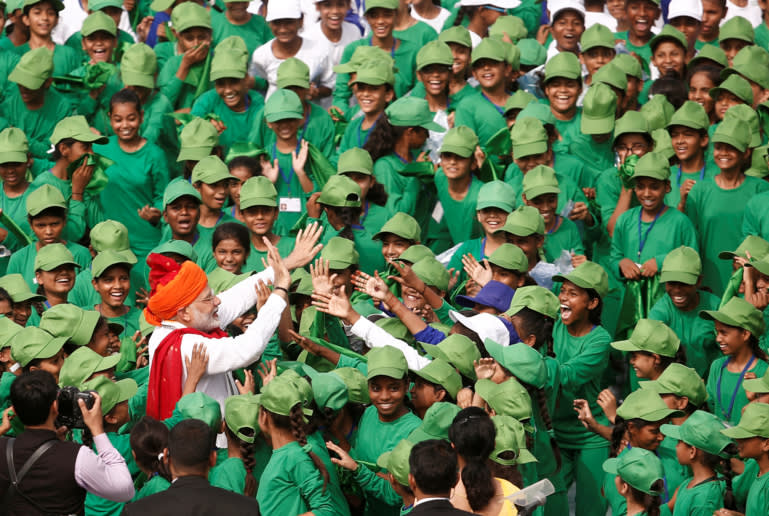 Indian Prime Minister Narendra Modi meets schoolchildren after his Independence Day address on Aug. 15, in which he announced Modicare will launch on Sept. 25.   © Reuters

To date, health care financing in India has been predominantly out-of-pocket. These outlays, which have left many families destitute, make up about 70% of total health spending in a country where the public expenditure in the sector is just 1% of gross domestic product.

Inadequate public funding made India the sixth-biggest private spender on health among low- to middle-income countries, according to data journalism website IndiaSpend. "Out-of-pocket health expenditure pushed 55 million Indians -- more than the population of South Korea, Spain or Kenya -- into poverty in 2011-12," the site said.

India has been maintaining health care programs for millions of central government employees, factory workers and individuals living in extreme poverty. Modicare, though, is of a different order of magnitude. 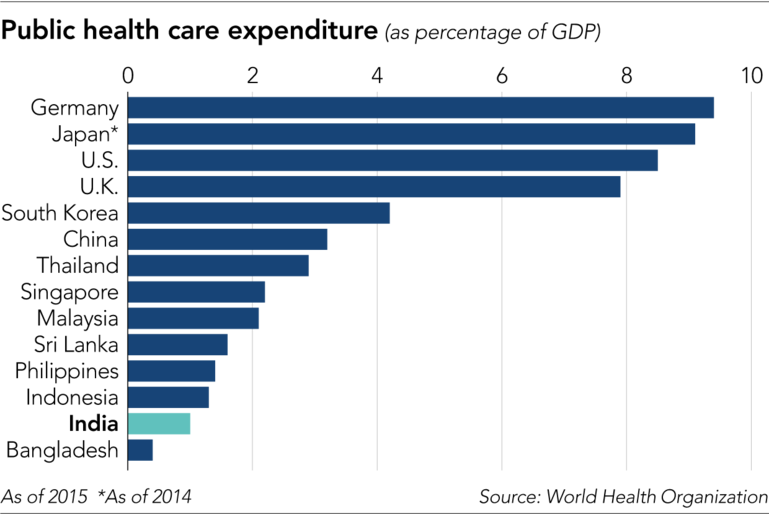 Yet, as generous as Modicare may seem, it has its critics. Some analysts feel it is nothing but a political gimmick ahead of the general elections scheduled for mid-2019, when Modi will seek a second five-year term.

Consider the timing. Modicare was first presented as part of a budget announcement as recently as February. The package, which also included increases in the government's procurement prices for farm products, was widely criticized for being heavy on populism.

"It is all politically motivated," said Duru Arun Kumar, an associate professor of sociology at the Netaji Subhas Institute of Technology. "The timing of this announcement, just months ahead of elections, shows" it was designed to court voters.

The health program might not even help Modi at the polls, some skeptics say.

With only a month to go before the launch, there is still confusion over implementation. Kanchan, a 28-year-old single mother, supports herself and her two young boys on 16,000 rupees a month from her contract job at a state bank. Like taxi driver Kumar, she is a likely Modicare beneficiary. But she has no idea how to enroll.

"It is a good program but I don't know much about it," said Kanchan, who goes by one name. "Nobody from the government has approached us so far about how to get the benefits."

Archana Jyoti, a health columnist in the capital, expects the government to have a hard time starting Modicare despite the hype. "Many [Indian] states have yet to frame guidelines, while the private health sector is not happy with the rates offered by the government."

According to Crisil, an analytics unit of Standard & Poor's, the package rate for cesarean delivery under the new program is 9,000 rupees, half the rate of around 18,000 rupees under existing public health schemes. Private hospitals, meanwhile, charge anywhere from 20,000 rupees to 100,000 rupees.

Private institutions provide over 70% of health care services in India, and their participation is crucial for the success of Modicare.

A couple of months ago, the Association of Healthcare Providers (India) addressed a letter of protest to Indu Bhushan, chief executive of the Modicare program, local media reported. The letter said the rates had "no scientific basis," and that private health care providers would "not be able to sustain themselves" unless the rates are reasonable.

But on Aug. 27, JP Nadda, the minister of health and family welfare, told reporters that 29 of India's 36 states and federally administered regions have signed up, while five are making progress toward doing so and the remaining two are expected to join later. Private hospitals have submitted more than 10,000 applications for enrollment in Modicare.

Bhushan told the Nikkei Asian Review in an interview that Modicare would "dramatically change" the country's health picture in the coming years. Besides participation, another question is where the money will come from.

Macroeconomic research company Capital Economics said the funds allocated to Modicare are "prohibitively small," noting that only 200 billion rupees, or 0.2% of GDP, have been earmarked per year.

"Better provision of health care can bring several benefits, from both an economic and wider perspective," Capital Economics said in an Aug. 17 note. "But we doubt that Modicare will have much of an impact."

The ultimate challenge for the government may be the country's weak basic health infrastructure. There is fewer than one doctor and one hospital bed per 1,000 people in India, according to the Organization for Economic Cooperation and Development. Modicare could bring a flood of patients to hospitals, extending the already overlong lineups.

"The shortage of medical equipment and professionals is even more acute in rural areas, where the poorest members of the population (those most likely to qualify for the insurance) are typically based. As such, it is highly unlikely that Modicare will be able to deliver even basic health care cover for 100 million families," Capital Economics said. 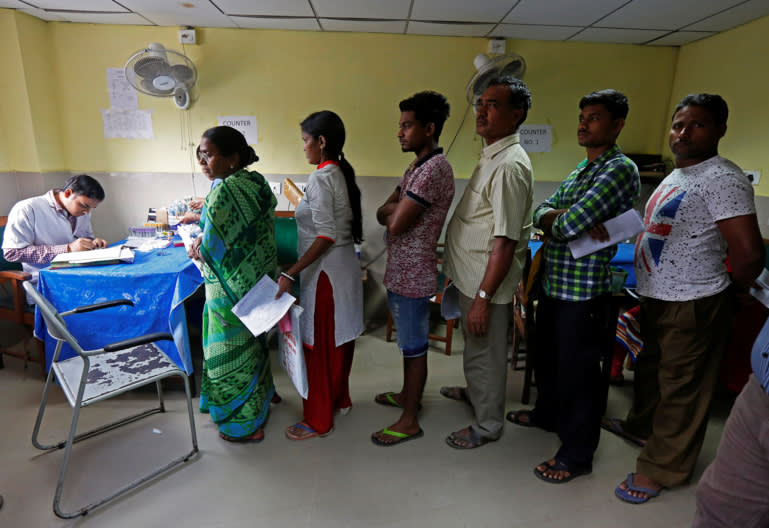 Fever patients wait for a checkup at a government hospital in Kolkata. A lack of doctors and hospitals could create bottlenecks for the new health insurance program.    © Reuters

If Modicare disappoints, with poor implementation fueling public frustration, it could backfire on Modi and his government. This is a real risk at a time when the popularity of opposition leader Rahul Gandhi, president of the Indian National Congress party, is rising and Modi's support is falling.

Some would-be beneficiaries are keeping their expectations in check.

"We have always paid out of our own pockets whenever there was a need for medical treatment," said Neetu, who has four children between the ages of 12 and 19.

Neetu said she recently paid a 500 rupee consultation fee to a private doctor for advice on treating her 17-year-old daughter's bacterial infection. "I'm not sure if this scenario changes [with Modicare]," she said. "People hold high hopes and then nothing happens. I'll wait and watch."

Whatever happens, Modi can be expected to try to use the program for political advantage, the columnist Jyoti said. "The government will showcase [the scheme] as its achievement to woo voters ahead of the general elections next year."

Modi in early August reportedly instructed the project team to prepare to counter negative media coverage -- as if the prime minister himself knows he is in for a fight.