Despite economic toll, Indian prime minister solidifies his power base NEW DELHI -- "November 8 is a sad day for India." With these words to reporters on Oct. 30 Rahul Gandhi, vice president of the Indian National Congress, set out plans for a nationwide protest against a decision by Prime Minister Narendra Modi that threw the country into chaos.

Puran Chand Jain, a small-time stationery seller in New Delhi, has still not fully recovered from the shock on Nov. 8, 2016. On that day, Modi's Bharatiya Janata Party government suddenly announced the withdrawal of 500 and 1,000-rupee banknotes, removing from the economy 15.4 trillion rupees ($238.1 billion at the current rate) -- about 86% of the total value of currency in circulation.

"Soon after the note ban, my sales shrank to 20% of the total. It's been almost one year now, and the business has only reached 50% of the pre-demonetization level," said Jain, who is barely able to make a profit of 10,000 rupees a month. With India's economy stumbling, it's time for Modi to have a rethink

For an economy so heavily dependent on cash transactions, the announcement amounted to a major economic shock. The move quickly sparked a nationwide cash crunch, the worst the country has seen since independence from British rule in 1947.

"My business was heavily impacted," Shaji Hassan, a door-to-door kitchenware salesman in southern Kerala state, wailed in January. While Hassan's weekly sales shrank by 60-70% to about 5,000 rupees, most of his remaining customers bought goods on credit, leaving him with daily cash revenue of just 100 rupees. To keep his clients, he had no option but to borrow 25,000 rupees from a consumer finance company at interest rates of 18-22%.

Jain and Hassan are among millions of people running cash-heavy small and medium sized businesses that are believed to have borne the brunt of demonetization.

People were given until Dec. 30 to deposit the withdrawn currency in bank accounts. They were also allowed to exchange some of the banned cash for valid notes. 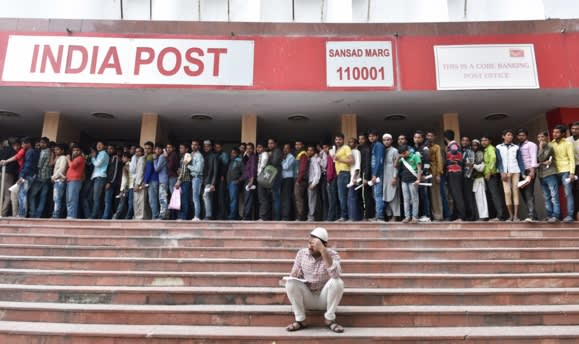 But the government's action led to serpentine queues in banks and at ATMs across the country. In the first weeks after demonetization millions of Indians spent hours lining up in front of bank counters at the expense of work and productivity.

Recalling the horrors she faced after demonetization, Rachna Rawat, a New Delhi-based mother of two, said it had become difficult to purchase essentials. "I had no cash to buy milk and vegetables, and vendors had no means to accept digital payments," she said, adding: "I couldn't even manage diapers for my then six-months old son."

With this, Modi entreated people who were suffering from the acute shortage of cash to be patient. Contrary to his words, however, the chaos spilled over into the New Year. 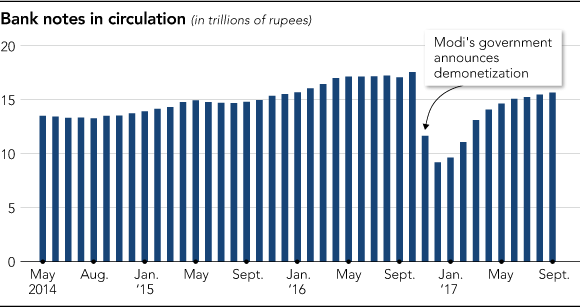 The prime minister's drastic step was aimed primarily at fighting "black money" -- unaccounted-for wealth and counterfeit currency. The government estimated that demonetized notes valued at between 3 trillion and 5 trillion rupees -- in circulation as untaxed cash -- would not return to the banking system because of fears of punitive action by the authorities.

However, its expectations fell flat. About 99% of the banned currency made its way back to banks, according to the Reserve Bank of India's annual report, released in August. The main objective -- fighting black money -- proved to be a failure. "Since all the demonetized cash has come back, where is the black money?" said Congress spokesman Randeep Surjewala, who labeled demonetization "the century's biggest scam."

"First, we suffered due to demonetization, and now there's GST (goods and services tax), which we still have not gotten used to," said Amit Narula, a clothes retailer in New Delhi. Rolled out on July 1, the "GST was an ill-prepared move. Traders still do not understand the complicated online tax filing processes, and the portal meant to facilitate us is riddled with technical snags."

During 12 years as chief minister of Gujarat state, in India's west, Modi gained national fame by achieving one of the fastest economic growth rates in the country. People expected him to do the same for the nation. But the major policies he has implemented have turned out be economy-unfriendly. 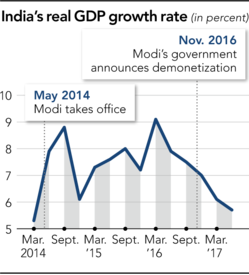 The GST regime subsumed more than a dozen older levies, but it entails online registration, tax filing and other formalities. Most traditional brick-and-mortar traders have yet to master the compliance framework. The multi-tiered GST structure -- 5%, 12%, 18% and 28% bands, with additional levies on items such as cigarettes and luxury cars --- has added to the confusion, triggering demands for a single rate.

Demonetization and the introduction of GST have been blamed for an ongoing economic slowdown in India, which was until recently the world's fastest-growing major economy. In the April-June quarter, gross domestic product growth slumped to a year-on-year rate of 5.7%, the lowest in three years.

The Modi government "fired two torpedoes [of demonetization and badly-implemented GST]," said Gandhi, whose party forms the largest national opposition to the BJP. "The economy somehow survived the first one, but the second one totally destroyed it." Gandhi's remark is an exaggeration, but there is a kernel of truth to it. Then-RBI Gov. Raghuram Rajan, an acclaimed economist, also cautioned the government about demonetization in February 2016. "Although there might be long-term benefits, I felt the likely short-term economic costs would outweigh them," Rajan recalled in a recently published book.

The International Monetary Fund is currently projecting Indian economic growth of 6.7% for the year to March 2018 and 7.4% for the subsequent year -- 0.5 and 0.3 percentage points lower than its May projections, respectively. The IMF cited the "lingering impact" of demonetization and GST for the slower than expected growth.

All this creates an impression that Modi's policy gamble failed terribly, deeply denting his image and that of his party. But has that been the case? Not really.

"Modi has done the right thing," said Uma Shankar, a New Delhi-based auto-rickshaw driver who is a staunch supporter of the prime minister's policies. "He is fighting against black money and corruption, and taking steps to improve [the] condition of the poor. Such bold reforms are bound to cause some disruptions initially, but eventually people like us will benefit." At first glance, this is a strange phenomenon. Modi's critics come mostly from the opposition parties and India's intellectual elite. Meanwhile, despite extreme hardship, the country's poor have cheered demonetization and remained mostly silent on GST, in part because they do not understand the tax regime.

Their support is fueled by widespread anger among the "have nots" against the "haves." For nearly 300 million people living in extreme poverty, it was sweet revenge to see the rich minority, loaded with illegal money, running from pillar to post looking for a solution to demonetization. Modi's motorcade makes its way through crowds in Varanasi on March 5 ahead of a state election in Uttar Pradesh.   © Getty Images

So Modi's star continues to shine, with support from the masses. In March, his Hindu nationalist party achieved a landslide victory in a state election in Uttar Pradesh, home to one-sixth of India's 1.3 billion people. It was backed not only by Hindus, the party's power base, but also by many Muslims. 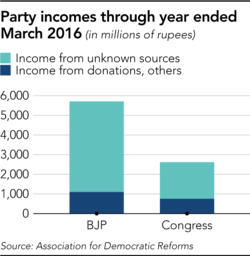 According to a "Mood of the Nation" poll conducted recently by the India Today Group, the ruling BJP-led alliance is supported by 42% of voters, up two percentage points from pre-demonetization levels -- well ahead of the 28% secured by the Congress-led opposition.

Modi is consolidating power within the BJP as well. Before demonetization, 81% of total BJP income came from unknown sources, including rich contributors who avoided tax, compared with 71% for Congress. Modi's move could therefore impact his party's funding adversely, but there has been little criticism of him from colleagues.

Mihir Swarup Sharma, a senior fellow of the Observer Research Foundation, an Indian think tank, says it is "clear Modi has found his narrative for [the general election in] 2019: that he is the man who is cleaning up the country, physically, morally and spiritually. By definition, those who oppose him are dirty."

Demonetization has further strengthened Modi's political stature. Voters see him as a leader capable of taking risky decisions, and retain faith in his government despite the failure of demonetization to reach its stated goals. 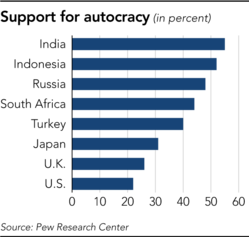 The underlying mentality of Indian people is also serving as a tail wind for Modi's muscular leadership style. According to the latest survey by the Pew Research Center, 55% of Indians favor autocracy -- the highest level of support among 38 countries studied -- with 27% "very strongly [backing] a strong leader."

Modi's bold policies appear to have an important and notable characteristic: Economic benefits are postponed to the future, but political benefits come to him today. A late October announcement by Arun Jaitley, Modi's finance minister, of a 2.11 trillion rupee recapitalization plan for state-run banks is also seen by political analysts as an aspect of BJP "realpolitik." By helping banks to write off bad debts, the administration is signaling to farmers and small businesses ahead of an important state election in Gujarat that banks will soon have greater capacity to lend.

Opposition parties will observe the first anniversary of demonetization as "black day." The government, on the other hand, will mark it as the "anti-black money day." In a way, both are correct. With a political masterstroke, Modi has cemented his political power base, though Asia's third-largest economy is suffering, at least in the short term.