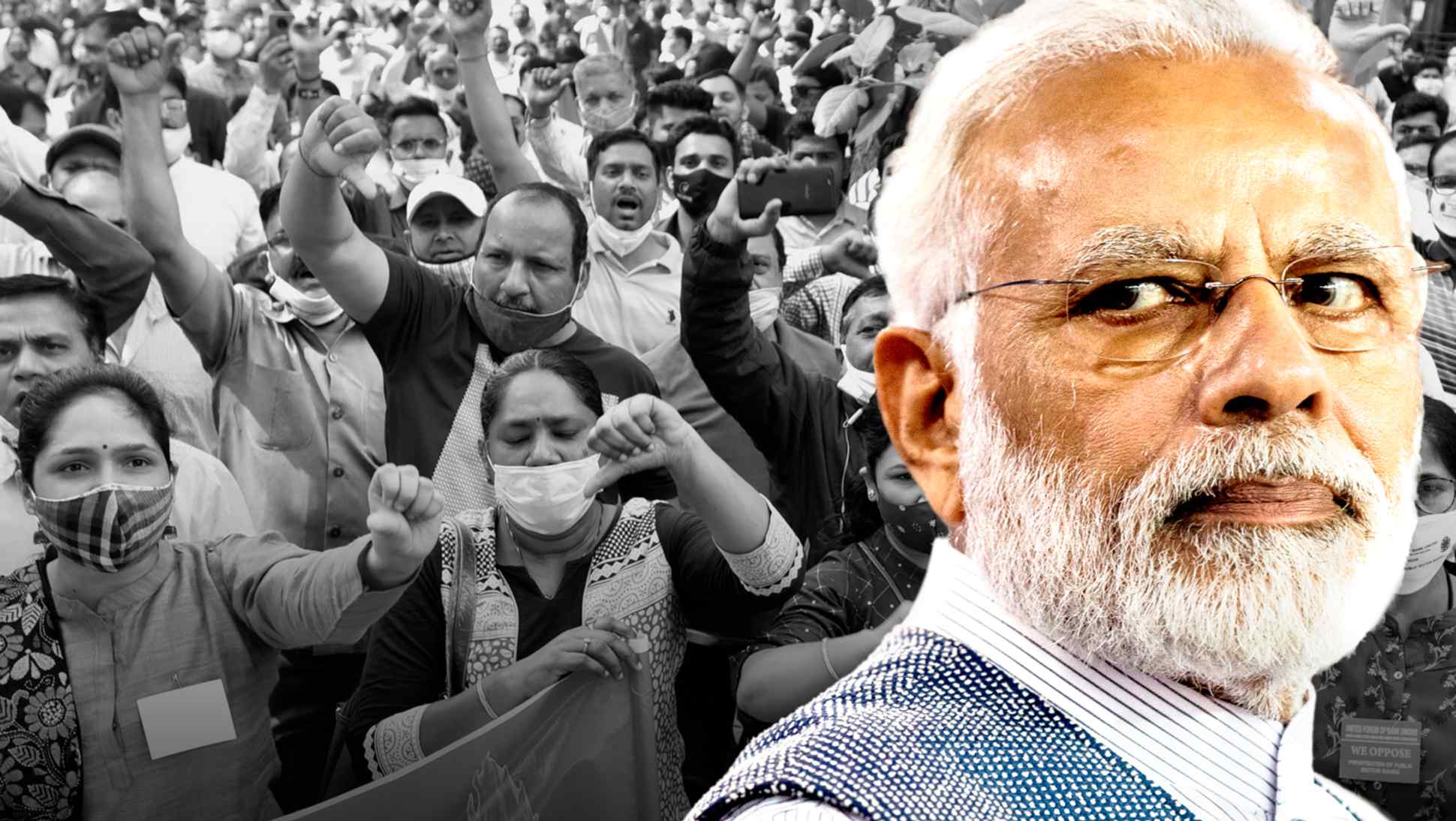 Indian Prime Minister Narendra Modi is trying to convince his country of 1.3 billion that "in every aspect of life, modernization is essential."   © Nikkei montage/Source photos by Getty Images
Asia Insight

MUMBAI -- Manish Sabharwal has been wrestling with India's labyrinthine labor laws since 2002, when he co-founded TeamLease Services, a Bangalore staffing company.

India has 44 federal-level labor-related laws littered with roughly 1,600 clauses. "You cannot comply with 100% of the labor laws without breaking 20% of them," Sabharwal has said for years.

Now Sabharwal is excited about four new labor laws that are to be implemented within a couple of months. They will replace 29 of the 44 federal laws, unifying myriad overlapping and contradictory rules.

"The reform reduces the 1,600 clauses to 400," Sabharwal told Nikkei Asia. "That means ... inspectors will have fewer rules and their contradictions to [use] in seeking bribes [which have been] really holding back" entrepreneurs. A New Delhi shoe factory.  More flexible labor laws will push "manufacturing employment from the current 11% of the labor force to 19% over the next decade," Manish Sabharwal says.   © Getty Images

The coming measures address complex and draconian labor and agriculture regulations as well as resource-wasting state-owned enterprises -- leftovers of the socialist economic regime installed mainly by India's first prime minister, Jawaharlal Nehru, and his daughter and third prime minister, Indira Gandhi, during the four decades after 1947.

Reforms have been held back by the few who gain from the old system. But the Modi-led Bharatiya Janata Party now has momentum. In 2019, it established a comfortable majority in the lower house. By last June it had a de facto upper house majority. By the end of September, labor and agriculture bills, which passed both houses despite fierce opposition, became law, though the new labor regulations await the completion of a state-level rules-setting process and the agriculture amendments have been suspended in the wake of street protests on the outskirts of Delhi.

Economists and government leaders have long recognized the necessity of expanding modern manufacturing and service industries so farm hands can migrate to more productive industries. The new labor laws are meant to increase nonfarm jobs, while the agriculture reforms are intended to make farms more productive with fewer workers.

Together, the reforms are meant to put India on a China-like trajectory. India's per capita gross domestic product in 1990 was slightly higher than China's. But as of 2019, India's per capita GDP was still crawling around $2,000, far behind China's more than $10,000. 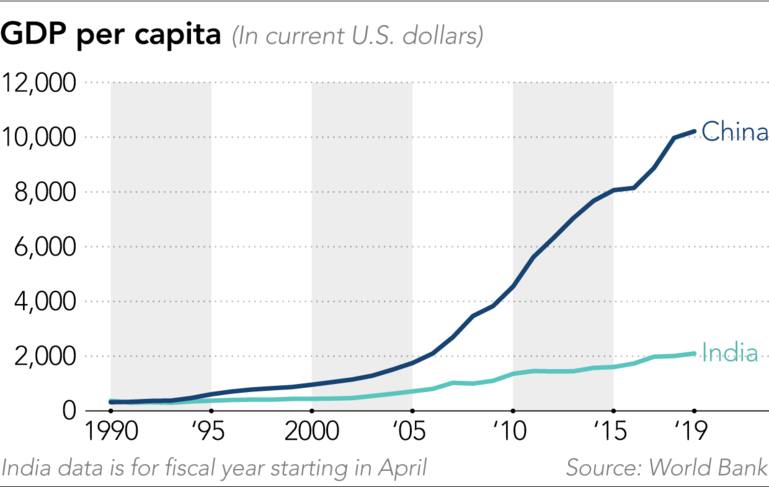 India contrasts with its giant neighbor in other ways. According to a report issued in 2018 by the Ministry of Corporate Affairs, it had 1.2 million active registered, or "formal," companies. China had about 15.6 million private "corporate enterprises" with employees, according to the National Bureau of Statistics.

India's 1.2 million "formal" companies, together with the public sector, employ about 10% of the country's roughly 500 million workers; the remaining 90% toil in the so-called "informal" sector -- farms, farm-related industries, construction sites that use day laborers, street vending, unregistered microenterprises -- according to a government report from July 2019. Consequently, existing labor laws leave 90% of the workforce with no protection and minuscule income.

Agriculture in 2019 employed more than 40% of all Indian workers, according to ILO estimates, but contributed 18% of India's GDP in the year through March 2020.

There are hurdles in front of farmworkers who might want other jobs. In a World Bank survey from 2012 that asked entrepreneurs to identify obstacles, Indians cited poor electricity infrastructure, corruption, tax administration, labor regulations and an inadequate quality of workers as the top five drags. As for the labor regulations, the entrepreneurs agreed heavy restrictions regarding dismissals constrained hiring.

The existing labor laws require a company with 100 or more nonmanagerial full-time employees to obtain government approval before any layoff or workforce reduction. The new laws raise this threshold to 300 and allows each state government to further raise the ceiling, whether to 1,000 or 10,000.

In addition, fixed-term employment will be legal in all industries and for all kinds of jobs.

This will push "manufacturing employment from the current 11% of the labor force to 19% over the next decade," TeamLease Services' Sabharwal predicted. Ganesh Choudhari, right, a vegetable farmer in the state of Maharashtra near Mumbai, believes most farmers support the agriculture reform effort. (Photo by Ken Koyanagi)

The farmer protests earlier this year drew global attention but were maligned by farmers elsewhere in India. "Those protesters don't represent the majority of farmers," said Ganesh Choudhari, a vegetable farmer in his 30s in an area about 190 km northeast of Mumbai. "Most real farmers like us support the reform because it will give us more [buyers] and better prices."

The system also prohibits farmers from selling produce outside their home states and from selling directly to private companies or individuals.

The reforms will abolish the state-government monopolies and fully liberalize contract farming.

Two years ago, Choudhari and some neighbors started growing tomatoes on fixed-price contracts for the India subsidiary of Kagome, the Japanese food giant (the state of Maharashtra liberalized contract farming of fruits and vegetables as early as 2006). Delhi protesters argue contract farming will lead to massive exploitation of farmers, but Choudhari and his fellows increased and stabilized their revenue after going to work for Kagome. Their productivity and profitability also improved thanks to Kagome's resilient and productive seeds as well as its advice on watering, fertilizing, controlling pests and diseases, and other matters.

Ashok Gulati, an agricultural economist at the Indian Council for Research and International Economic Relations, said the protesters near Delhi represent 6% of all Indian farmers, that this minority produces large amounts of rice, wheat and a few other staples, and that it benefits from the existing state-run wholesale markets and government purchase programs.

"There is no doubt that [with the reforms] public wholesale markets will face competition from private markets," Gulati wrote in January in a newspaper opinion piece, explaining the protesters fear the collapse of the existing state-run wholesale market regime from which they benefit.

The Modi government is also moving forward on the SOE front. In February it submitted a budget for the fiscal year through next March that declares 12 SOEs, including two banks and one general insurance company, will be privatized during the next 12 months.

India has 367 so-called central (national) public-sector enterprises, including 12 banks and seven insurers. They include makers of condoms, bicycles and three-wheel automobiles as well as a hotel and tour operator.

The country's 189 nonfinancial SOEs had combined accumulated losses of 1.4 trillion rupees ($19 billion) on their balance sheets as of March 2019. Of the 189, 77 had negative net assets, according to a Comptroller and Auditor General report released in February. Since 2008, the government has injected close to 4 trillion rupees into state-owned banks, according to a CAG report released in January.

While maintaining a "bare minimum" number of state-owned enterprises in "strategic sectors" -- defense, space, transport, power and finance -- the Modi government says all other SOEs will be privatized, merged with other SOEs or terminated. "This country has been burdened with socialism imported from the U.S.S.R.," Finance Minister Nirmala Sitharaman told members of the international media in February.

The privatization drive has prompted another wave of protests. In March, bank unions led a strike of about 1 million employees of state-owned and private-sector banks. All bank branches across the country were shut on March 15 and 16. Payment settlements worth 165 billion rupees were reportedly affected on March 15 alone.

The protests could swell. Many trade unionists have joined Delhi-region farmers to demand that the new labor laws be withdrawn. And the bank unions' protests could be joined by unions related to nonfinancial SOEs.

The situation is reminiscent of what Margaret Thatcher went through in the 1980s. A 362-day nationwide strike by workers demanding a halt to mine closures greeted the British prime minister's market-oriented rationalization of SOEs and other supply-side reforms. Thatcher defeated the unions by remaining steadfast, refusing to compromise, and by waiting for the unions, strikers and their families to run out of money.

Modi eschews patience. For the past few years, the BJP-run central and state governments have arrested journalists, activists and students who have spoken out on the unilateral abolishment of the Jammu and Kashmir region's constitutional autonomy as well as on a discriminatory citizenship law amendment.

When the hubbub arose over the new farm laws, Modi's authoritarianism reemerged. Journalists, opposition politicians and students were arrested on sedition charges in accordance with laws installed by the British in the 19th century.

"In every aspect of life, modernization is essential. It's very late, we have already lost a lot of time," Modi said in his monthly radio address on March 28, in an attempt to persuade protesters on the agriculture reform.

A logical discussion on the matter would prove more constructive than arresting critics. The crackdown has eroded India's reputation as a democracy. Freedom House of the U.S. in a March report moved India from its "free" societies category to "partly free." And the V-Dem Institute at the University of Gothenburg in Sweden reclassified India's polity as an "electoral autocracy."

These will be needed if India is to provide more than low-paying informal tasks to the roughly 10 million young people who enter its workforce every year.

Thatcher wielded determination, patience and tolerance in winning her fight for a market economy. Modi would have a better chance of success if he rethinks how he deals with opponents and critics.

"We live in a democracy," Panagariya said, "and political compromises have to be done. Not every reform can happen on the day it is announced."