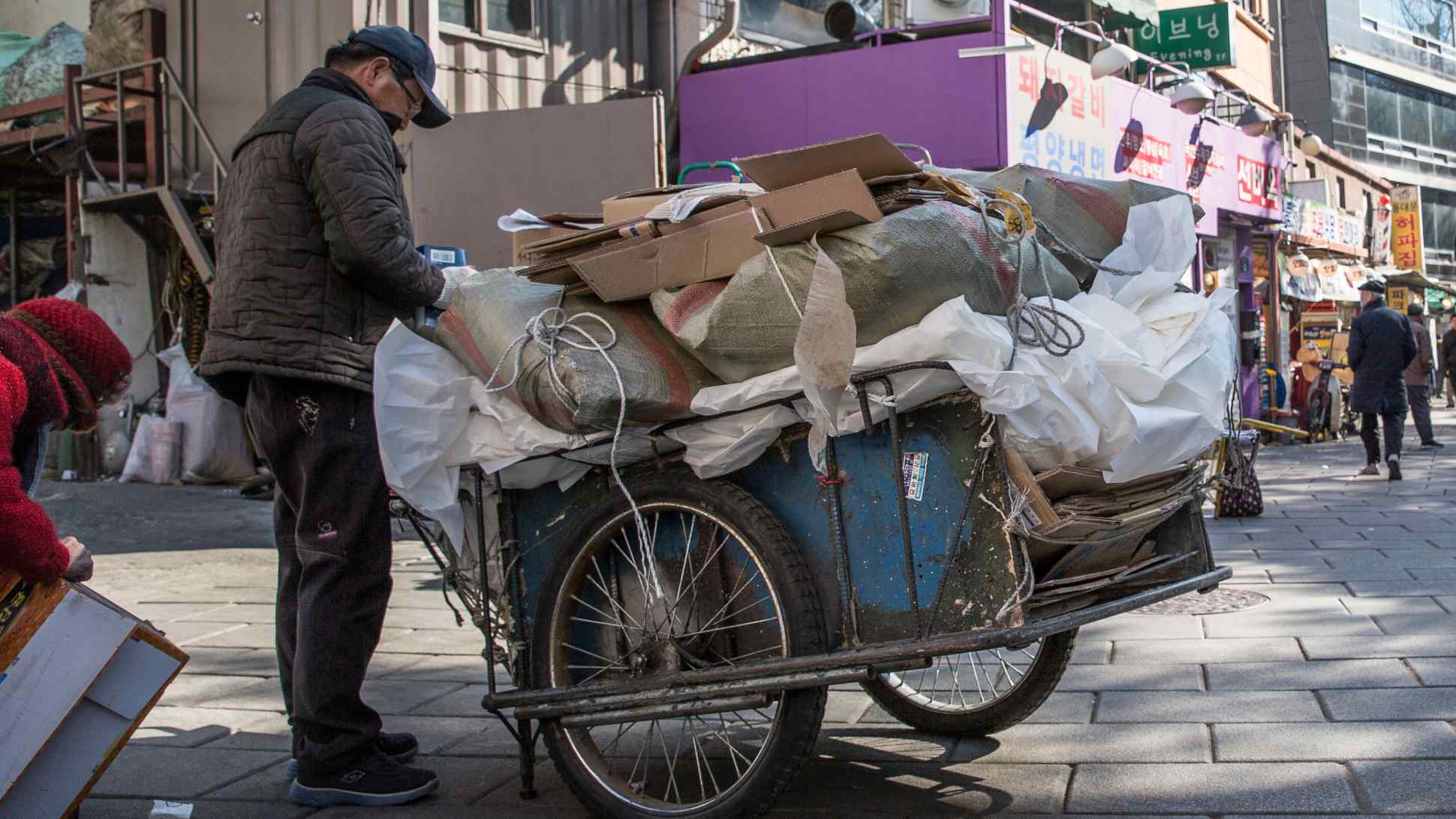 A South Korean man tends to his cart near Seoul's Pagoda Park on Jan. 26. Some older residents eke out a living by collecting paper and other trash. (Photo by Jean Chung)
Asia Insight

His daily ritual is to head to the South Korean capital's Pagoda Park, where he and his friends buy 2,500 won bowls of cow blood soup for lunch. "I think it's the cheapest in the country," said Son, who gave only his surname. "Afterward, we go for 200 won coffee."

Son draws a basic monthly pension of 250,000 won from the government but ends up with very little after paying his bills. "I can't even heat my room as much as I want. I turn it on for a while and turn it off again to save money." Still, in a rapidly aging country facing an epidemic of senior poverty and a daunting pension reform challenge, he may be one of the luckier ones.

As younger generations abandon the Confucian tradition of caring for elders and the government struggles to pick up the slack, shockingly high numbers of older South Koreans are killing themselves. In 2017, the suicide rate per 100,000 people stood at 48.8 for 70-somethings and 70.0 for those in their 80s or older, according to the Korea Suicide Prevention Center, an arm of the Health and Welfare Ministry. The national average was 24.3.

While President Moon Jae-in is taking steps to change a pension system considered one of the weakest in Asia, the issue looks likely to dog politicians for decades to come.

"The state's and the government's political inability and irresponsibility is the reason behind senior citizens' highest poverty and suicide rates" among Organization for Economic Cooperation and Development members, said Cho Hyun-yun, a researcher at Dongguk University in Seoul. "It is crucial that political parties play key roles in resolving elderly poverty." 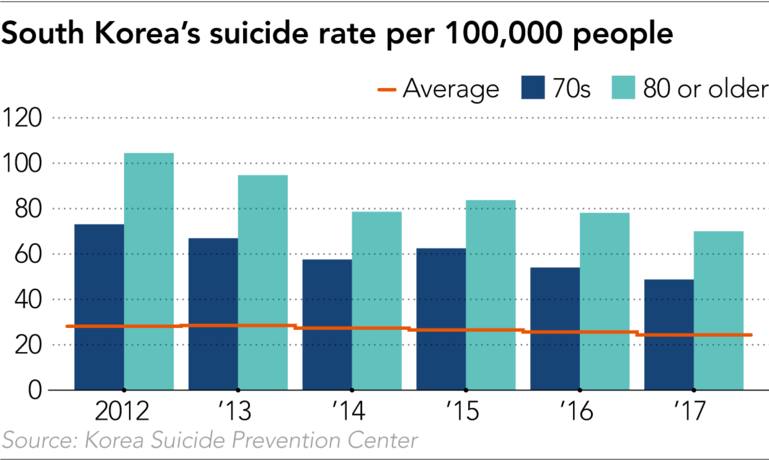 The situation is far worse than in Asia's other poster country for aging, Japan, where the growing social welfare burden is a constant concern for policymakers. OECD data shows that in 2015, 45.7% of South Koreans over the age of 65 lived in poverty -- the most of any member state and well above Japan's rate of 19.6%.

The generation of South Koreans now between the ages of 60 and 80 is the last one that supported parents financially and, broadly speaking, it is the first to go without such support. "My children's generation has no idea how to support parents," said Kang, 79, who also asked to be identified only by his surname. "I cannot ask my son or daughter-in-law for money."

Kim Yu-kyung, a senior researcher at the Korea Institute for Health and Social Affairs, observed: "Korea's family structure has become smaller, with society being more individualized. People believe that the state can and should support senior citizens, not the family." 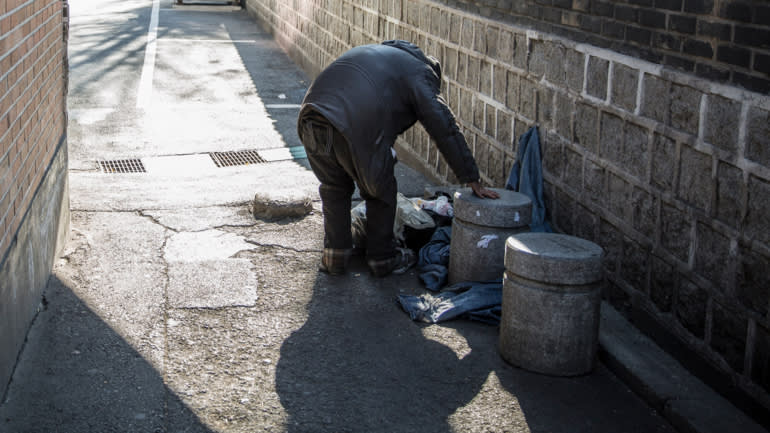 South Korea has the highest proportion of seniors living in poverty among OECD members. (Photo by Jean Chung)

So far, the state is failing miserably.

The country's pension system received a grade of D in the 2018 Melbourne Mercer Global Pension Index, alongside Japan, China and India, which means there are major weaknesses and omissions that need to be addressed.

"South Korea suffers from one of the weakest pension systems for the poor when expressed as a percentage of the average wage, at just 6%," said David Anderson, Mercer's international president.

Making matters worse, penny-pinching companies force many South Koreans to accept early retirement in their 50s, even though the legal retirement age is 60. This means the workers have to make ends meet for an extra decade.

Anderson stressed the need to increase support for the poorest pensioners, such as by introducing a requirement that a portion of retirement benefits from private pension plans be diverted to fund the assistance, and increasing the overall level of pension contributions. 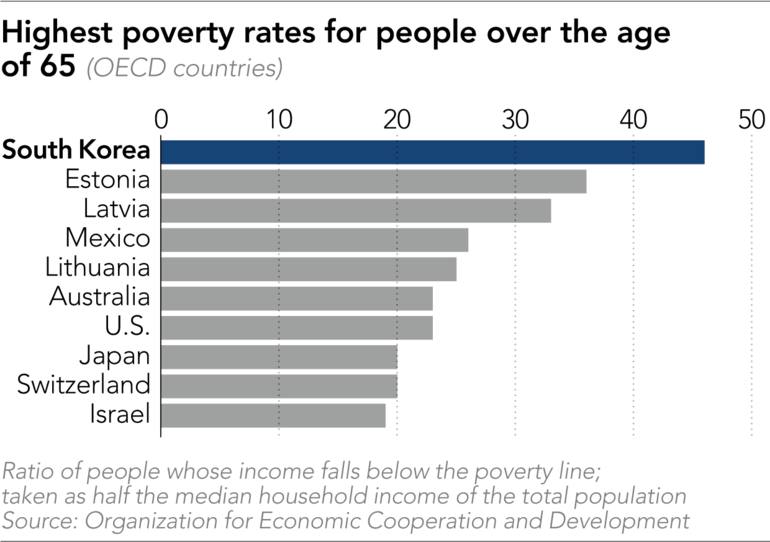 Moon's liberal government is taking action, not least because seniors are a growing -- and increasingly hostile -- contingent of voters.

Many older South Koreans still support ousted conservative President Park Geun-hye, who is serving a 25-year jail term for corruption, pending an appeal to the Supreme Court. They tend to oppose Moon's policy of engagement with North Korea, since many remember the Korean War from 1950 to 1953 and were taught in school about the perils of communism.

Sympathy for Park runs deep partly because she is a daughter of former President Park Chung-hee, whose military dictatorship presided over the country's economic rise.

"They are a generation which has nostalgia for the past when they contributed to the country's industrialization," said Choi Jong-sook, a researcher at the Institute for Korean Democracy. "The reason they stick to the 'good past' is because their present is too miserable." Moon, hoping to bring more seniors over to his side before next year's general elections and the presidential race in 2022, has raised the basic pension -- a government stipend that starts at age 65 -- by 50,000 won, up to 300,000 won. This takes effect in April.

The welfare ministry is also pushing reform of the national pension, a separate system funded by payments made during workers' careers. This system was created in 1988 and became compulsory in 1999, and the late introduction is one reason many seniors are forced to rely on the basic stipend.

These possibilities have been put to the National Assembly for review. 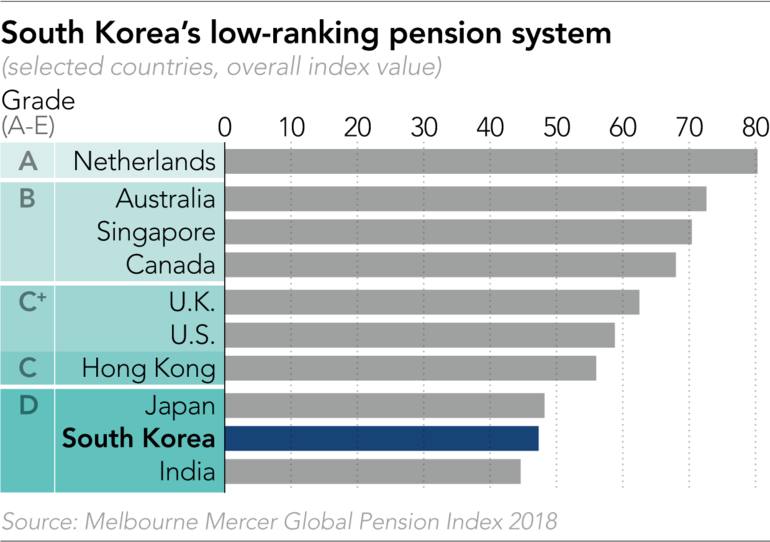 But while lawmakers mull them over, seniors struggle to scrape by -- especially outside the big cities.

Suicide statistics from the prevention center show a clear geographic divide. Seoul had the lowest rate of 18.1 per 100,000 people in 2017, while South Chungcheong Province's figure reached 26.2. Experts attribute this to a lack of support in the rural province.

"There were few medical or cultural agencies where senior citizens could ask for help in the region," said Choi Myung-min, a professor of social welfare at Baekseok University in Cheonan, South Chungcheong. "Those who could not work were excluded from the community."

Recognizing this, Prime Minister Lee Nak-yon last month ordered Cabinet members to establish a system in which the central government and municipalities would cooperate to prevent suicides by seniors. "Old people suffer from poverty, diseases, isolation and emotional pain," he said. "I think it is essential to resolve these pains as a solution for suicide prevention." 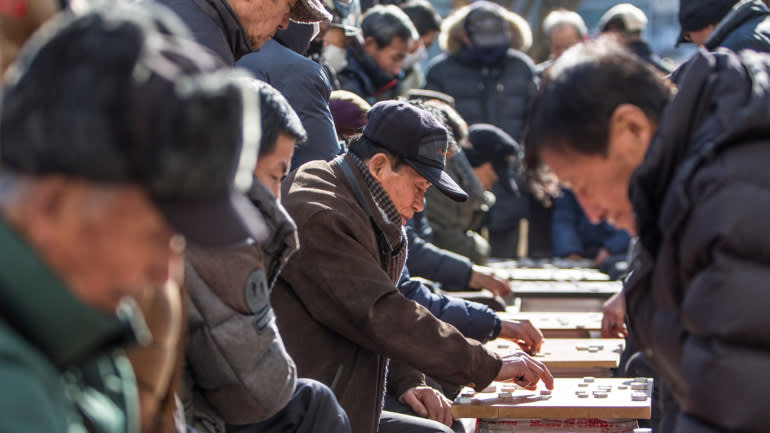 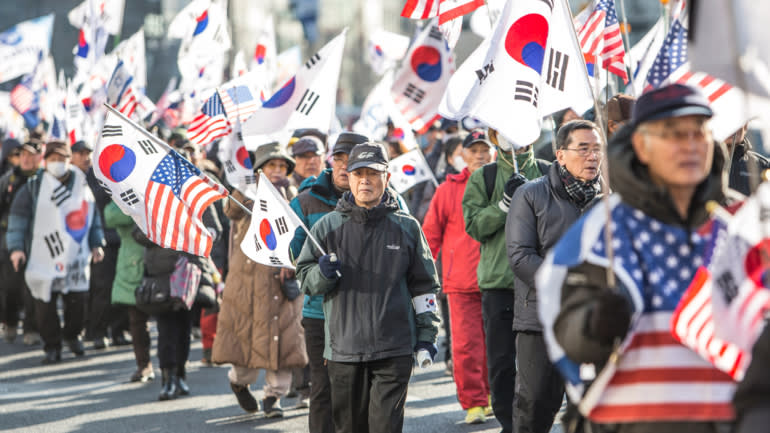 But there are no easy answers in a country where young people are also having trouble finding work. Youth unemployment has been hovering around 8%, well above the national average. This means people like 70-year-old Lee Sang-kye are often unable to find jobs at shops or restaurants, since positions are quickly filled by younger job seekers.

Lee ekes out around 6,000 won a day by selling used paper and boxes he finds on the streets of Seoul. It is barely enough for him to survive.

"I can just about buy some vegetables for side dishes," he said. "I get 250,000 won per month from my national pension, but I'm ineligible for the basic pension because I own a house."

The income, he said, is simply "too little to cover my living costs."