TOKYO -- For Sanshiro Shirahashi, there's currently no place like home.

The last (and first) time Tokyo hosted the Olympics, in 1964, Shirahashi - then a student - barely stayed home. He recalls feeling excited walking around the city that drew thousands of foreign visitors and was the focus of world attention.

This time, effectively no Olympic spectators are allowed in Tokyo, which has been under a state of emergency for most of 2021. The delayed Olympics, the 74-year-old says, "feel the same as any other Games held in other places."

Still, Shirahashi has gotten some enjoyment from watching the Olympics at home -- where Prime Minister Yoshihide Suga has asked people to stay -- and described as "fantastic" the way Japan won two gold medals given in the inaugural skateboarding competition.

"Right now, the best way to spend time is to watch TV and drink beer at home," he says.

Shirahashi, who is fully vaccinated, has had a lot of company for staying home. The household viewing rate for the Olympics opening ceremony was 56.4%, according to Video Research, which easily topped hit TV drama series Hanzawa Naoki at just over 30%. The rate reflects the households that watched the broadcast in real-time. 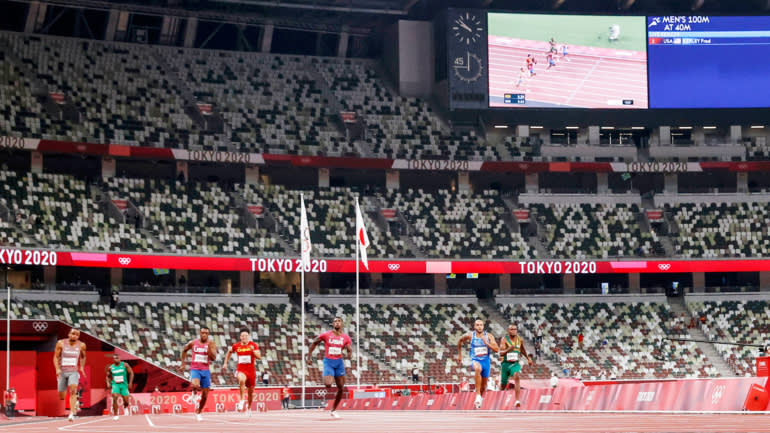 Shirahashi also has plenty of company in being a fully-vaccinated senior. Suga said on Friday that at the end of July, 80% of seniors were expected to be fully vaccinated.

But far fewer younger Japanese have been vaccinated, which is an impediment to economic growth and to resuming what Suga calls a "safe, ordinary life". And the spectator-less Olympics and reduced business during Tokyo's fourth state of emergency this year - which has been expanded in area and length -- means the Games can't give a boost to long-tepid consumption, which accounts for about half of Japan's gross domestic product. 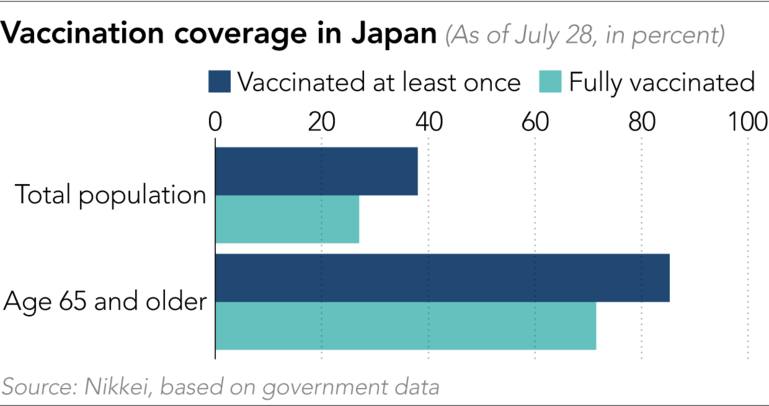 Thwarting Japan's hopes for stronger consumption is the fact Japan is quite far from reaching safe, ordinary life, especially with Tokyo and other parts of the country under states-of-emergency. The current, fourth one for Tokyo, which began before the Olympics, has been extended (and expanded geographically) to August 31 from the originally set August 22.

Japan's cautious approach over the huge sporting event by the government has not helped Suga boost Asia's second largest economy. Although Japan's vaccination coverage has significantly improved, economic activities are far from normal.

Data on how household consumption has risen - or not - in periods encompassing the July 23- August 8 Olympics will not be available for at least another month. Consumption data for June will be reported on Friday. 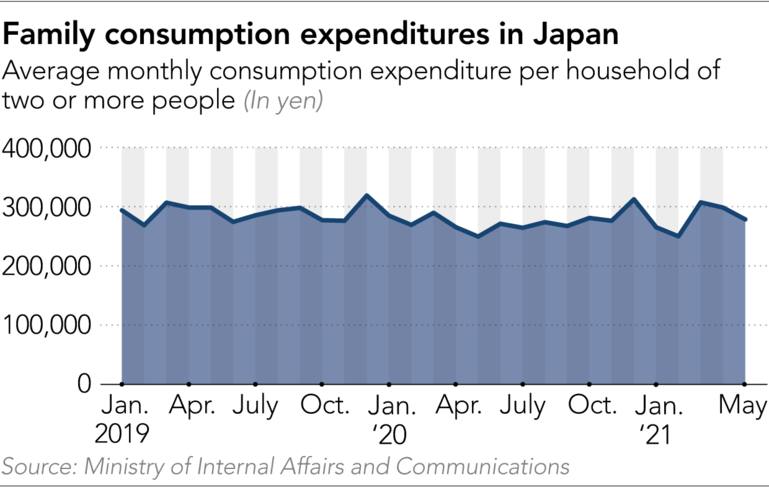 Retail sales data for June has already been released, and it shows that Japan had a minuscule 0.1% gain from a year earlier. For the same month, China reported an annual increase of 12.1% while the United States registered an 18.0% surge.

Even before COVID-19 began battering the world, consumer spending in Japan was dented by the government's October 2019 hike in its consumption tax to 10% from 8%. 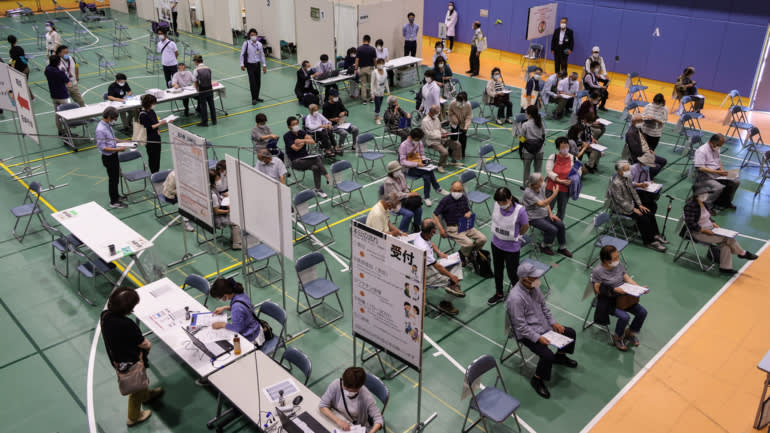 People wait to be get vaccinated in Japan's Aichi prefecture in May. (Photo by Yuki Nakao)

In normal, pre-pandemic years, consumer spending gets some boost in July-August because of heavy domestic vacation travel by families. But with the state of emergency, many people - like Shirahashi - aren't going anywhere.

But there are others who plan to travel in spite of the government asking citizens to avoid "unnecessary and unessential" travel. Bookings for All Nippon Airways (ANA) domestic flights between August 6 and August 15, a day when many visit relatives and ancestral graves, are more than 30% higher than a year earlier - when there was no emergency in effect.

Under the emergency, restaurants have been asked to close at 8 pm and to not serve alcohol. Provisions in Japan's state of emergency declarations, unlike those in some countries, are more appeals for change to help contain COVID-19 rather than orders that carry penalties for offenders. But authorities can fine some businesses, though not individuals, and in what appears to be the first instance, the Tokyo Metropolitan Government announced in July that four businesses were fined for staying open after 8 pm. A Tokyo restaurant street is nearly empty during the state of emergency. (Photo by Yuki Kohara)

Nevertheless, facing overwhelming strain on their business and insufficient government support, many restaurants have stopped listening to requests. Nikkei's research involving 500 Tokyo restaurants showed that half did not close at 8 pm as authorities asked. (Meanwhile, one finding of a Nikkei poll was that 53% of respondents felt it is "right" or "not enough" to restrict serving alcohol in restaurants under the state of emergency. However, 39% described such a restriction as "too strict".)

Anecdotally, there has been some increase in consumption by high-income Japanese. In June, sales of six of the most expensive imported car brands including Ferrari and Bentley were the highest since 1988. Luxury brands and items such as jewelry appear to also be selling well in department stores. Demand for luxury goods and out-of-store sales from VIP customers is "less affected by COVID-19", said a spokesperson for Japanese department store Takashimaya. 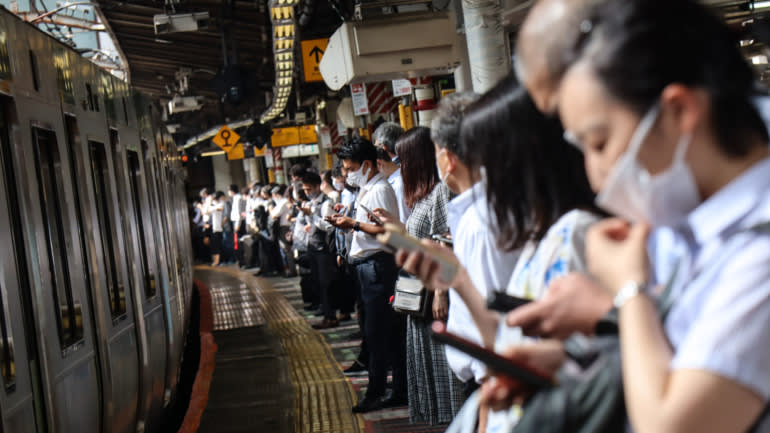 People wait to board a train in Tokyo in July. (Photo by Ken Kobayashi)

Naoko Kuga, senior analyst at NLI Research Institute, a private think tank, says improvements in employment and an upbeat outlook for the future are essential for continuous growth in consumption, as the pandemic has hurt the young and non-contract employees.

Kuga said that consumption tends to fall when COVID-19 infection rises, or vice versa, but overall it has stayed lower than pre-COVID levels. Compared to last year, the impact of the pandemic on consumption is milder. One of the reasons is there is now a market for staying-at-home needs, such as delivery services. Domestic shipping of flat-screen televisions between January and June increased by 20% from a year earlier, according to the Japan Electronics and Information Technology Industries Association.

For sure, vaccination has increased after a slow start; Suga delivered on a promise to get jabs to 1 million a day. But there's a long way to go, as only about 38% of the population has received at least one jab.

Suga's decision to bar Olympic spectators contrasted sharply with those by British Prime Minister Boris Johnson, whose country resumed all economic activities in June. The delayed Euro 2020 football championship went ahead in London on July 11, with 75% of the 90,000 seats occupied. Spectators were asked for proof of negative testing for the coronavirus at the entrance.

Since then, the number of hospitalized patients in the UK has increased along with the number of infected patients. The debate over Johnson's decision continues in the UK, where there is wariness and worry about coronavirus infections of people who have been fully vaccinated. While some have shunned the Japanese government's appeals for behavior changes, others have complied. "I was scared [of COVID-19] in the beginning because I did not know what was happening, but I don't have that fear now," said a 74-year-old woman shopping at a department store in Tokyo recently. But Kazuyo, who gave only her first name, said she still would not go traveling, commenting "I should not act differently from everyone else."

For Japan, there's a major question about whether enough people are willing to take the vaccines. According to a study by Koji Wada, a professor at International University of Health and Welfare, more than 40% of the respondents said they do not immediately want to get vaccinated. Many were wary of side effects, and others were skeptical of the efficacy of the jabs.

Among the fully vaccinated, there's frustration about facing the same restrictions, like on travel and meeting friends, that apply to the unvaccinated.

Keiko Sugi, who runs a Tokyo care center that seniors come to periodically for group activities, was hoping to have a sleepaway camp, like she has done before, for fully vaccinated caregivers and seniors on Sept. 3-4 - and that's in jeopardy as "it would seem inappropriate if the state of emergency is still in effect".

Considering that Japan's daily infections are in thousands, lower than tens of thousands in the U.K., the Japanese public has been very careful about their activities.

One of the major differences from the U.K. is vaccination coverage. The U.K. has already vaccinated the majority of the population with two doses. Japan uses vaccines from Pfizer and Moderna. In July, inoculation in Japan has outpaced supply, forcing the government to slow the vaccination and fueling frustration among the public. From both sides, careful and non-compliant, Suga's administration has been the target for criticism. In polls, support for the Suga government dropped to the 30% range in July for the first time since its inauguration in September.

Important decisions such as the state of emergencies, "should be made based on comparisons between medical risks and economic risks, and that should be communicated to the citizens," said Sumire Hirota, professor at Tokyo City University Graduate School of Environmental and Information Studies.

Until now, while experts have constantly communicated health risks, economic risks were not sufficiently explained to the public, according to Hirota. "It is not clear how politicians made the decisions based on the comparisons [of health and economic factors]," leading to mistrust, she said. She added that many Japanese "tend to be sensitive about risks that affect life and death in the aging society."

"There was no perfect right answer under the crisis situation, and there could be mistakes such as with the U.K. herd immunity strategy," Hirota suggested. To gain public trust, Suga should "explain the rational decisions in ways that citizens can understand, and go ahead with such decision with full power," she said.