FUKUSHIMA, Japan -- For the organizers of the Tokyo Olympics, the start of the torch relay last week was a welcome beginning after investing seven years and over $12 billion. For 82-year-old Teiko Nemoto, it was a bittersweet end to the life she once knew.

The northeastern prefecture of Fukushima was chosen as the starting point to highlight the region's recovery from the earthquake, tsunami and nuclear disaster 10 years ago. Nemoto, who was born and raised in the town of Futaba -- within a 10 km radius of the melted Fukushima Daiichi nuclear reactors -- returned for the first time since the catastrophe with her son, a relay support runner behind the torchbearer.

Futaba remains mostly abandoned. Nemoto and her family have resettled in Tokyo.

"The Olympics were nominally for reconstruction, so I expected my town would become a place we can have hope for," Nemoto told Nikkei Asia. "But I'm now sure that this is a place where no one can live. This is the last time I'll come back."

When Tokyo won its bid for the 2020 Games in September 2013, they promised to be a powerful symbol of Japan's recovery from the triple disaster and the crowning achievement of Prime Minister Shinzo Abe's "three arrow" economic agenda.

Much has changed, and Nemoto is far from the only one nursing a sense of disappointment. The rebuilding of the northeast has come a long way, but $200 billion later, it remains an incomplete effort. Abe is no longer prime minister, resigning last year in the heat of the coronavirus pandemic. And the crisis has delayed the games by a year, prompted a ban on overseas spectators, and underscored the unsustainable costs borne by Olympic hosts.

Only 23.2% of Japanese support holding the games this year, according to the latest Kyodo News poll -- a steep plunge from 73% in January 2013.

Since the vast majority of citizens no longer want to play host, and the rest of the world cannot come to watch, a question hangs over Japan's festivities: What was this all for? "I wanted foreign spectators to come to Japan and Fukushima," said Kenichiro Mizoi, 76, one of the oldest torchbearers and a longtime resident of Fukushima. "I'm not sure we can show the world our reconstruction" without international fans.

Those foreign crowds were originally projected to generate 10 billion yen ($92 million) through ticket purchases alone. The latest projections put the loss from their exclusion at nearly 196 billion yen, including canceled tickets and other inbound consumption such as hotels, transportation and shopping, according to Nomura Research Institute.

For hosts, the Olympics have always been more about political opportunity than financial profit.

"The Olympics offered countries a chance to become more international and open to the rest of the world," said Jun Saito, guest professor at International Christian University in Tokyo.

Pyeongchang 2018, the most recent event, cost $12.9 billion, over three times the $3.5 billion proposed to the International Olympic Committee. Yet for the government in Seoul, it was a priceless opportunity for Korean athletes separated by the 38th parallel to compete under the same flag.

"It marked the transition from the crisis of 2017 to the North Korean charm offensive of 2018-2019," said Ankit Panda, senior fellow at the Carnegie Endowment for International Peace, a Washington think tank. Beijing hosted the 2008 Summer Games at an estimated cost of $45 billion, just two years before it would overtake Japan as the world's second-largest economy. Next year's Winter Games, also in Beijing, could serve as China's introduction as the preeminent world power in the wake of the coronavirus pandemic.

China even appears keen to capitalize on the Tokyo Games by offering the IOC vaccines for athletes, a move met with suspicion in Japan.

"China is facing international criticism that it was negligent in containing the virus, so the country is trying hard to recuperate its damaged diplomatic image by engaging in mask and vaccine diplomacy," said Ichiro Korogi, professor at Kanda University of International Studies. "The covert purpose of China's move is to show the world the Tokyo Games were successful because of Chinese vaccines."

But Japan can hardly fault China for using the Olympics to make a global statement. The 1964 Summer Games in Tokyo were the original "reconstruction Olympics" -- from the ruins of World War II -- and introduced Japan as an advanced economy with shinkansen bullet trains, modern airports and highways.

"In the case of Tokyo 1964, Japan accelerated free trade and became an [Organization for Economic Cooperation and Development] member in the same year," said Saito. "So there was indirect economic merit in the Olympics because it offered Japan a chance to be more open toward the international community." 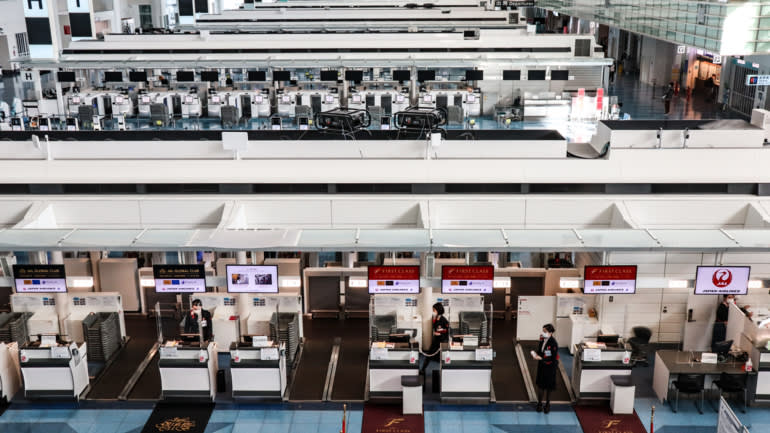 Nearly empty airline counters at Tokyo's Haneda International Airport on March 29: The delayed 2020 Olympics and Paralympics will be held without overseas spectators to minimize coronavirus risks. (Photo by Ken Kobayashi)

This time around, Japan's government and Olympic organizers have latched on to the coronavirus pandemic, broadening the theme from domestic reconstruction to global recovery.

"We will work closely with the IOC to hold the Tokyo Olympics and Paralympics in their complete form, to show future generations that humanity overcame the coronavirus," former Prime Minister Abe said when he announced the postponement last year.

But a true global comeback from COVID-19 could take years, with governments continuing to accumulate debt as their economies suffer. This could make hosting the Olympics an even less attractive proposition, and the pandemic's impact on Tokyo 2020 could ultimately hammer home the wisdom of a more cost-efficient Olympic model.

"Tokyo 2020 can be a turning point for the games to scale down," said Munehiko Harada, professor at Waseda University in Tokyo. A small cluster of spectators awaits the torch relay in front of Futaba Station in Fukushima on March 25. (Photo by Francesca Regalado)

Already, fewer cities have been bidding as governments become aware that doing so makes little economic sense, Harada noted. Only Paris and Los Angeles -- sprawling metropolises with existing world-class venues and infrastructure that have previously hosted the Olympics -- placed bids for the Summer Games in 2024. Eleven had sought the 2004 Games.

The IOC, well-aware of cities' growing reluctance, has moved to improve cost efficiency and optimize existing infrastructure. The Tokyo Olympics are "basically the last in the old world where the concept was you spend an unlimited amount and everyone should be all right with that because it's the Olympics," said Victor Matheson, professor of sports economics at College of the Holy Cross in the U.S.

Nevertheless, ICU's Saito said, "Especially because countries have the economic burden of the pandemic, fewer will be able to afford to host the games in the future, depending on their fiscal situation."

Opponents of the games would be just fine with that.

At one stop along the relay route, a lone protester shouted from his van, stressing the folly of going ahead in the middle of a pandemic and economic downturn. Even locals who turned up to cheer on runners from their communities, ignoring advice to watch from home, shared mixed feelings.

"There's no clear goal to the reconstruction," said a 32-year-old resident of Naraha, a town near the nuclear plant, who asked to stay anonymous. "It will last forever."

Torchbearers ran through towns still unpopulated because of radiation. A stadium in Fukushima that was remodeled to host Olympic baseball and softball games will remain mostly empty come summer because of the lack of overseas fans.

Keiko Sugasawa, a 73-year-old resident of Nihonmatsu, Fukushima, said: "On the way to see the relay, I saw black plastic bags with contaminated soil on the road, which brought home to me that there's still a long way to go for full reconstruction."

Save for scattered supporters like them, 300 torch carriers, organizers and media, the relay route that weaved through Fukushima and its disaster-hit neighbors Iwate and Miyagi was largely quiet. Prime Minister Yoshihide Suga stayed in Tokyo for a parliamentary session.

"There is no 'festival' atmosphere here," said Michiko Saito, director-general of Utsukushima Sports Rooters, a nonprofit volunteer organization in Fukushima. Azusa Iwashimizu, a member of the Japan women's national football team, holds a torch during a relay ceremony in Fukushima on March 25. (Pool photo)

At the torch relay ceremony, Fukushima Gov. Masao Uchibori thanked organizers for choosing his prefecture but acknowledged the long road ahead. "People are starting to forget the disaster, so the 'reconstruction Olympics' is very special to the people of Fukushima."

Koichi Nakano, professor at Tokyo's Sophia University, begged to differ, arguing the "reconstruction Olympics" amounted to nothing more than an excuse to spend billions on an international spectacle. "It's always been a facile slogan with no real substance," he said.

Despite the economic losses and sour public mood, Japan still refuses to shun hosting responsibilities like some other countries. Even now it is in the market for another Olympics -- albeit in their more modest winter form.

Snowy Hokkaido, the country's northernmost main island, is gunning for the Winter Games in 2030, with backing from 80% of companies based in the prefectural capital of Sapporo.

Nakano did not hide his skepticism. "I suppose the conservatives in power will try again because they've run out of ideas to restart the economy," he said. Assuming travel returns to normal, he added, "They'll try to continue to think of some kind of circus to bring tourists into Japan."