Vatican watches over minorities while making overtures to China

YANGON/TOKYO -- On the third day of his recent visit to Myanmar, Pope Francis entered the Kaba Aye Center, one of the most important Buddhist temples in Yangon, with his shoes off in accordance with local customs.

There, he delivered a message: "For when we speak with one voice in affirming the timeless value of justice, peace and the fundamental dignity of each human person, we offer a word of hope." The pope also quoted Buddha himself, advising, "Overcome the angry by non-anger; overcome the wicked by goodness."

Francis was treading on delicate diplomatic territory, given the tensions between Myanmar's Buddhist majority and Rohingya Muslim minority. He needed to be mindful of his hosts' sensitivities. Yet he could hardly overlook the plight of the more than 600,000 Rohingya refugees who have fled a military crackdown, given his clear concern for another minority in Asia that faces varying degrees of oppression: Christians.

This concern appears to be one factor -- though not the only one -- in Francis' increased focus on Asia, compared with his predecessors. The region also represents a growth opportunity for the church.

By the latest count, there were some 134 million Catholics in Asia in 2012, more than double the 62 million in 1980. But Catholics and other Christians are far outnumbered just about everywhere they reside, with the Philippines and East Timor being the sole exceptions.

In the 100 years to 2010, the ratio of Catholics to Asia's overall population increased, but only from 1% to 3%, according to Pew Research Center. Many are vulnerable to persecution, and in some countries, anti-Christian sentiment has become more apparent in the past few years. Pope Francis meets a group of Rohingya refugees in Dhaka on Dec. 1.   © Reuters

Before Francis' tour of Myanmar and Bangladesh, the big question was whether he would utter the word "Rohingya" in his speeches and sermons.

Back in August, two days after Rohingya insurgent attacks on security posts touched off the military clampdown, the pope remarked at the Vatican, "Sad news has reached us of the persecution of our Rohingya brothers and sisters, a religious minority." Many in the West expected the pope to make another firm statement, this time in Myanmar.

But before the trip, Cardinal Charles Bo -- Myanmar's first cardinal, who was installed under Pope Francis in 2015 -- and others had advised the pope to take a less direct approach. One concern was that saying "Rohingya" could turn many Myanmar Buddhists against Christianity and Christians in the country, including Protestants and other denominations.

Last Wednesday, the evening before the pope's departure from Myanmar for Bangladesh, Vatican spokesman Greg Burke told reporters, "If we are going to have a discussion, we will have the discussion like brothers." He also noted that diplomacy between the Vatican and Myanmar is still young. "I am very happy that people think the pope is very powerful, but he is not."

During the pope's stay, top Buddhist leaders made a point of condemning "terrorism and extremism," in reference to the insurgent attacks. Francis, for his part, refrained from referring to the Rohingya by name but repeatedly preached the need for mutual respect between ethnic groups and religions. The pope's visit came in response to an invitation from Myanmar State Counselor Aung San Suu Kyi, who visited Vatican City in May to mark the establishment of full diplomatic relations. Meeting the pope is often seen as a symbolic gesture of peace with the West: Iranian President Hassan Rouhani visited the Vatican in 2016 after agreeing on a nuclear deal with the U.S. and other powers.

But the pope had his own reasons. "What is relevant is the fact that the Holy Father has clearly a great interest in Asia," Alberto Melloni, secretary of the Foundation for Religious Studies Bologna and a church historian, told the Nikkei Asian Review. "There is a geography in Pope Francis. The most important countries are the ones that are more thirsty for peace and justice" -- countries like Myanmar and Bangladesh.

This was Francis' third visit to Asia since his papacy began in 2013. He went to South Korea in 2014, followed by a trip to Sri Lanka and the Philippines in 2015.

The latest visit was uniquely significant, as well, because Francis chose two countries where Christians account for a tiny fraction of the population. In contrast, around 30% of South Koreans identify as Christian, while the Roman Catholic Church is the dominant religious institution in the Philippines.

Francis' disquiet over minority Christians in Asia has been clear for some time. Last year, the Vatican announced the pope's prayer plans for each month in 2017. The prayer for November: "To witness the Gospel in Asia." Francis explained his intention in a recent video message, saying, "On this continent, where the church is a minority, the challenges are intense." 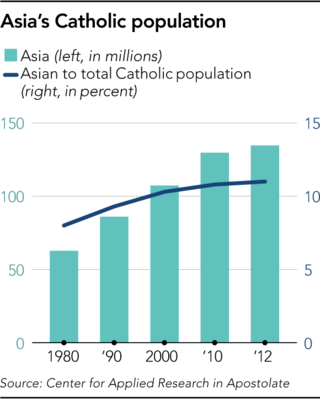 He went on to say, "Let us pray that Christians in Asia may promote dialogue, peace and mutual understanding, especially with those of other religions."

Christians see a number of reasons to worry about their brethren in Asia. One unsettling example is the blasphemy case of former Jakarta Gov. Basuki Tjahaja Purnama. The ethnic Chinese Christian politician was accused of insulting the Quran, put on trial and ended up losing the latest gubernatorial election. This, and Purnama's subsequent two-year prison sentence, were seen as victories for radical Islamists and their political supporters -- casting doubt on Indonesia's reputation for tolerance.

Strengthening the Vatican's influence to protect believers in Asia is a priority for the pope.

Yet there are glimmers of light, too. There are reports of steady growth in conversions to Christianity, especially in South Korea, Vietnam, India and China. In Vietnam alone, where religion was suppressed after reunification, the Catholic population has tripled in the past 40 years to reach 6.8 million. Pope Francis greets believers as he arrives for Mass in Dhaka on Dec. 1.   © Reuters

The pope's outreach to Asia could resonate with citizens and further encourage the rise of Christianity in the region -- particularly at a time when the ratios of Catholics in Europe, Latin America and the Caribbean are trending downward.

The possibilities in China are intriguing. Though solid figures are hard to come by, since many believers belong to underground churches, some estimates put the number of Christians on the mainland at over 70 million.

The Holy See and China broke off ties in 1951, and religion was completely forbidden in the Cultural Revolution of the late 1960s. But China now allows "normal religious activity" under its constitution, provided the faithful belong to one of five state-sanctioned organizations. Vatican watchers reckon Beijing is trying a softer approach to avoid encouraging the growth of the underground churches.

Slowly but surely, the Vatican and China are stepping closer to restoring relations.

Taiwan alarmed by Chinese overtures to its diplomatic allies

Coincidentally, in 2013, Xi Jinping took office as president one day after Francis was elected as pope. The two leaders exchanged letters and telegrams.

In another gesture, China allowed the pope's plane to cross its airspace en route to South Korea.

Still another step toward normalization came in late November, when cultural institutions from both states held a joint news conference to announce an exchange of art and simultaneous exhibitions at the Vatican's Anima Mundi Museum and Beijing's Forbidden City. The exhibits are to open next March.

Some sticking points remain. The Vatican's diplomatic relations with Taiwan are an obvious deal breaker, from Beijing's perspective. An additional issue is who gets to appoint bishops: Both the Holy See and Beijing claim the sole right to appoint them, and the disagreement widened the distance between the two sides during the term of former Chinese President Hu Jintao.

But there have been signs of movement toward a resolution, thanks to a series of not-so-secret negotiations. A cardinal in Hong Kong wrote in a local Catholic weekly that there is an initial agreement in place, with both sides compromising.

Alberto Melloni, secretary of the Foundation for Religious Studies Bologna

While some claim a compromise would be tantamount to the Vatican making a pact with the devil, others see it as a pragmatic way to move forward. After all, the Holy See has already been reaching out to Vietnam -- another country with which it has no formal relations, but where there is considerable potential for Christianity.

Melloni, the church historian, sounded optimistic about the China situation. "The diplomatic relationship with China is something that is already done or is very soon to come."

He elaborated: "Francis has made it [clearer] than ever that the church is not looking for more power, but is looking for freedom and for the possibility to live, and to show that a Catholic can be a good Catholic [and also a] good Chinese citizen."

There is a hypothesis that some Asians are turning to Christianity to fill a spiritual void in the wake of rapid economic growth. If that theory holds water, the region may be fertile ground for a Catholic church looking to regain growth momentum, despite the threat of persecution in some countries.

Researcher Yuki Kumagawa in Milan contributed to this article. 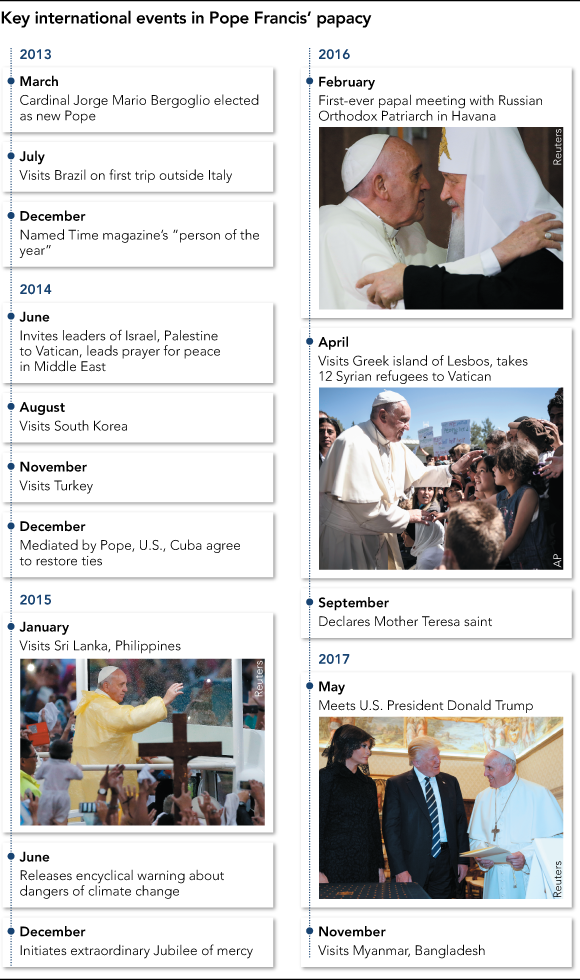