BANGKOK -- A nostalgic farmer in northeastern Thailand symbolizes how populism has gummed up the gears of the economy -- a pressing challenge for whatever government emerges from the country's highly anticipated general election.

"When Thaksin Shinawatra was our prime minister from 2001 to 2006, we could sell our rice at much higher prices," said Buadang Nakpornprai. "They aided our lives. I hope the next government will provide better support to farmers," she added.

The 67-year-old Buadang is a typical victim of Thailand's tradition of government handouts. Readily available assistance may have helped growers for brief spells, but it came at a price. "Farmers will not think about increasing productivity or cutting production costs to compete with others," said Chookiat Ophaswongse, honorary president of the Thai Rice Exporters Association.

That pervasive mindset, many argue, is a major reason Thailand produces few high-value-added products and finds itself facing the so-called middle-income trap.

The term describes a situation in which a country loses its export competitiveness once wages reach a certain level, but fails to make the technological progress needed to compete with more advanced economies. The predicament raises tough questions for Thailand's present and future leaders.

Can they summon the political will -- and maintain stability long enough -- to push painful reforms and address long-term issues, from an educational imbalance to a reliance on cheap migrant labor? 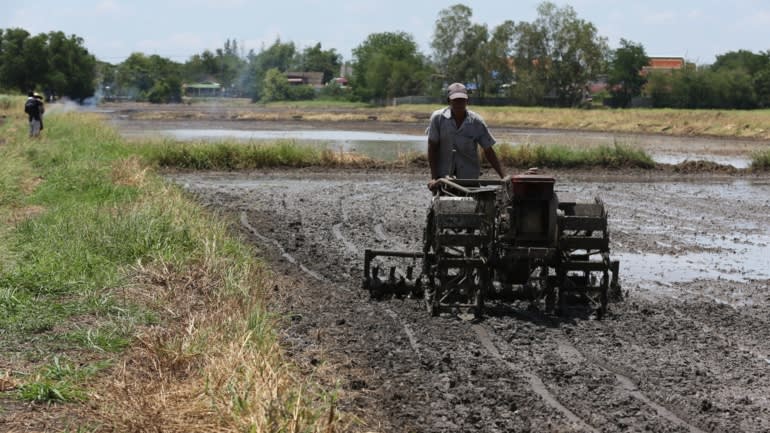 A farmer in Ayutthaya, Thailand: Government handouts have given the country's farmers little reason to enhance productivity. (Photo by Ken Kobayashi)

It has been a decade since Thailand started trying to restructure the agricultural sector by urging farmers to shift away from only commodity-grade products, to reduce their exposure to volatile prices.

Yet, hungry for votes, past governments adopted contradictory policies, propping up the prices of farm goods and providing cash handouts. The political temptation is powerful: Around 30 million of Thailand's 69 million people are farmers. More than half of the 30 million are poor rice farmers.

Nothing exemplifies Thai rice populism more than the rise of Yingluck Shinawatra, Thaksin's sister, who became prime minister in 2011 after a landslide election victory.

During the campaign, she promised every farmer that their rice would be purchased for 15,000 baht ($470) a ton, 100% above market prices. Later, after her downfall and the 2014 military coup, the rice-pledging scheme became the center of a dereliction of duty trial that prompted Yingluck to flee the country. Ousted Prime Minister Yingluck Shinawatra, left, greets supporters in 2017. During her election campaign in 2011, she promised all farmers that their rice would be purchased at 100% above market prices.   © Reuters

Along with the transparent desire to win votes, past Thai governments did hope that aiding farmers would give them enough capital to invest in the future -- either by purchasing better equipment or furthering their education to enhance productivity.

Instead, said Somchai Jitsuchon of the Thailand Development and Research Institute, the giveaways "dragged our agriculture sector behind."

"Farmers didn't think of anything but growing rice and one day, when the scheme collapsed, they had nothing," Somchai said. "They failed to adjust themselves to produce rice at low cost for better competition, or even produce higher grade with higher quality."

This is one reason the stakes are so high in the upcoming election. The long-delayed vote, which is scheduled for Feb. 24 but could be put off again, might be a rare opportunity for Thailand to choose a leadership that would dedicate itself to long-term productivity growth. All three major political camps have presented plans to tackle such issues, though the real test -- implementation -- will only come after the election. Back in the 1960s, Thailand wooed automakers and other foreign investors to open factories, jumping ahead of neighbors like Indonesia and Vietnam in industrialization. But the tables are turning. From 2010 to 2016, Thai productivity growth on a per-worker basis trailed regional peers, including those two countries and the Philippines, according to the Asian Productivity Organization, an intergovernmental body. The agricultural sector is part of the problem.

Academics say the junta, until recently, was taking the right approach toward farmers.

"The current government avoided taking populist measures and pushed farmers to leave their current work, move to the suburbs and engage in more productive jobs," said Akio Egawa, an associate professor of economics at Momoyama Gakuin University in Osaka and a visiting research fellow at Chulalongkorn University in Bangkok.

But in the run-up to the election, the junta changed its tune and budgeted 1 billion baht to shore up prices of palm oil, which had fallen due to oversupply. The government also decided to give 14.5 million poor Thais, mostly farmers, one-time cash handouts of 500 baht. 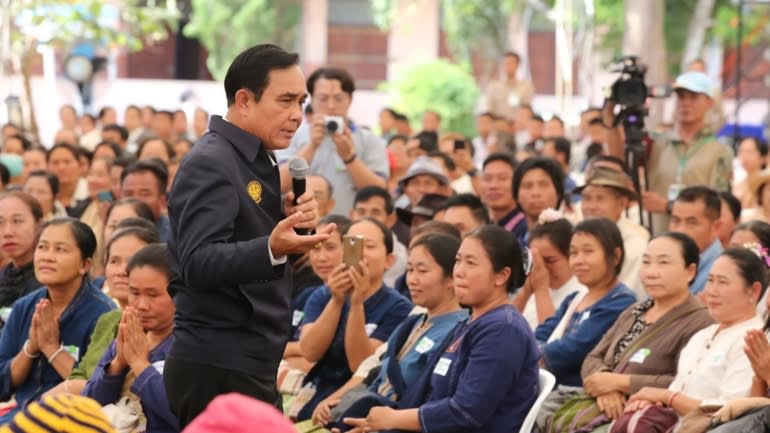 The country has yet to restructure an education system that produces a significant number of graduates ill-suited to the labor market.

"I graduated from a decent college in Bangkok, but I was not able to find any jobs that suited my major," said a 27-year-old with a bachelor's degree in law. He said he gets by with a job on a tech support helpline for electronics.

Foreign investors and even the Federation of Thai Industries say that while many Thais earn bachelor's degrees, they are typically in the liberal arts. Electronics and robotics engineers are sorely needed to promote investment in new, high-tech industries, as the government plans to do under its Eastern Economic Corridor development initiative.

"Very few national and public universities have science programs in rural areas," Egawa said. "And Thai households in the 2010s see less need for their children to receive a college education."

Just as Thailand lacks the skilled labor it needs to escape the middle-income snare, the country is also short on less-skilled workers to drive the labor-intensive export industries that account for over 60% of gross domestic product. 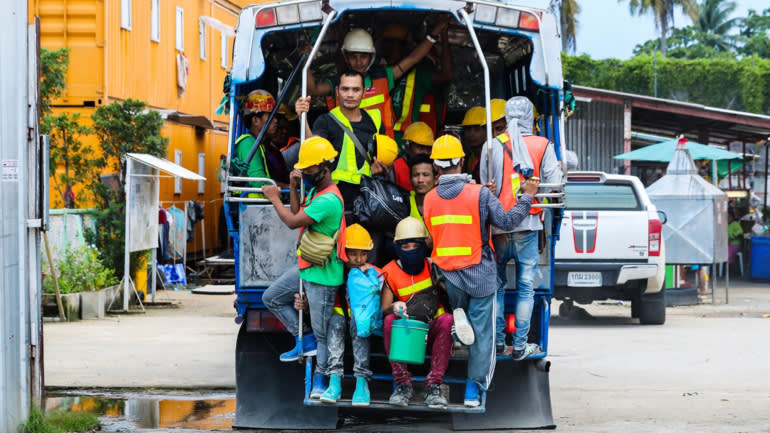 Thailand relies not only on imported consumers -- tourists -- but also workers from neighboring countries. Recently, the Thai government signed a memorandum of understanding with Myanmar that would bring 50,000 migrants to cover a fisheries worker shortage.

"All these issues of rural and agricultural reforms, education system reforms and migrant workers are closely interconnected," said Kobsidthi Silpachai, head of market and economic research at Kasikornbank.

"Because the country did not correctly [push] farmers to work on competitiveness or productivity, less people from rural areas pursued higher education," he said. "This failed to prompt the government [to pursue] education reforms, to have a variety of talent in different professions."

Chronic political instability has not helped. Some say the junta has actually been a positive force, at least in terms of laying some of the groundwork for growth.

Prime Minister Prayuth Chan-ocha's government has taken steps to boost manufacturing and launched a plan to turn the country into a smart digital hub. It is also behind the Eastern Economic Corridor, which is bringing "internet of things" and innovation centers to three industrial provinces home to Asia's largest concentration of petrochemical, automotive, and electronics production.

These moves, often referred to as Thailand 4.0, offer some hope of raising industrial productivity. The election is expected to be a three-way race involving the pro-junta Palang Pracharat Party, the Thaksin-linked Pheu Thai Party and the urban-establishment-favored Democrat Party. The winner will face an uphill battle to achieve a goal the junta set in 2016, in its 20-year National Strategy Framework.

The framework includes an ambitious plan to join the ranks of high-income countries by 2036. This will require average economic growth of 5% to 6% until then. But for the three months through September, Thailand's annualized GDP grew only 3.3% on the year.

Siam Commercial Bank's Economic Intelligence Center projects the economy will grow by 4% in 2019.

Any slowdown would only make the middle-income trap that much harder to overcome. Thailand is aging, too, which means the only hope for hitting the target is to improve productivity.

The clock is ticking, yet the election looks to be at risk of another postponement. The junta recently hinted that it might delay the vote, though the current provisional constitution says it must be held by May 9.

This prospect has brought pro-democracy activists into the streets of Bangkok and elsewhere -- a fresh reminder of the obstacles the nation has yet to clear.