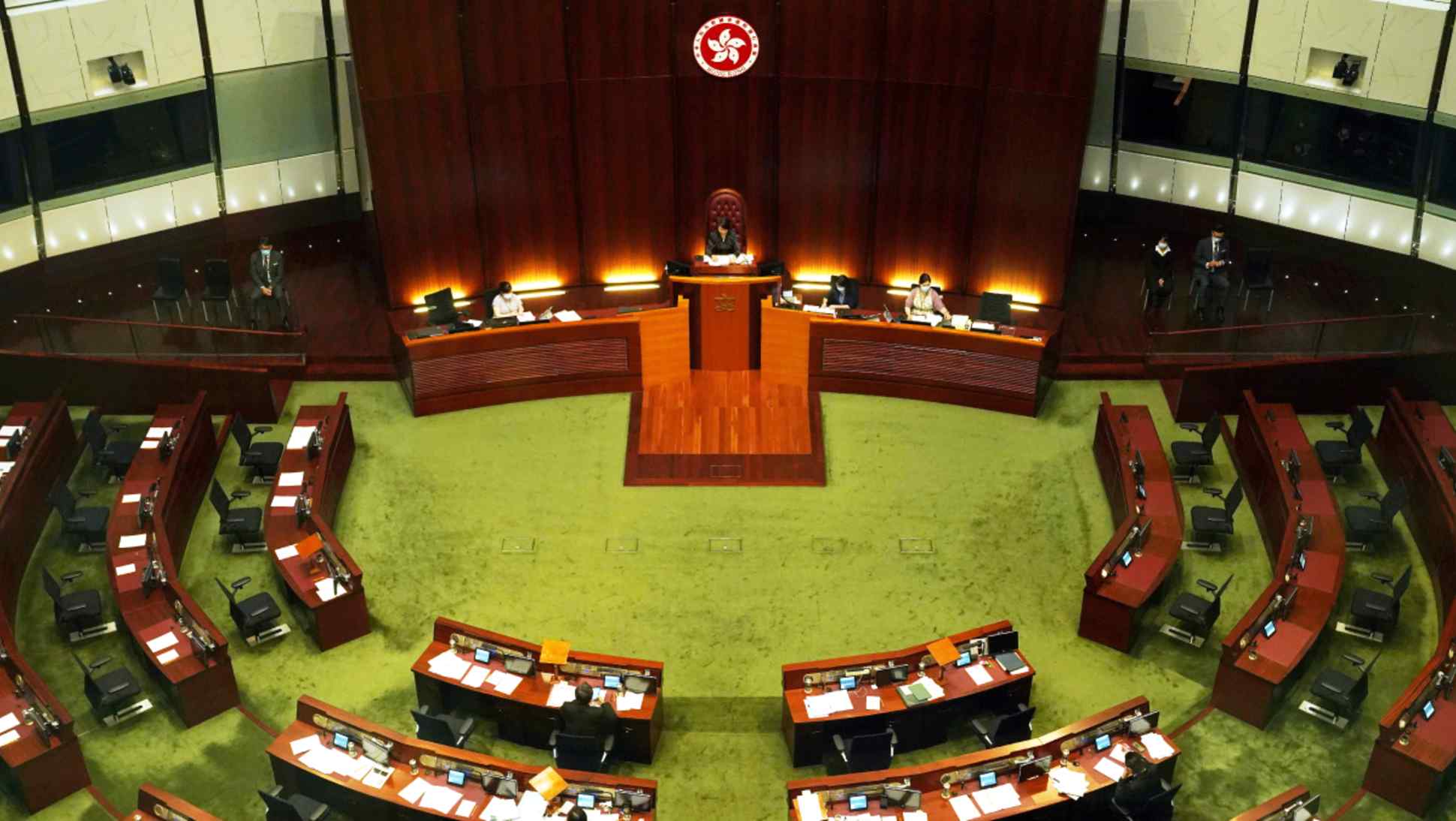 HONG KONG -- Adrian Lau has spent every day of the past four weeks handing out flyers encouraging people to vote in Hong Kong's Legislative Council election this Sunday. Few passersby take the independent candidate's pamphlets, or even acknowledge his presence.

"It's a lot quieter [than past elections], but it is still hard work," Lau said. "The youth don't engage, although occasionally I'll be told to 'add oil' by the older generation," he added, referring to a common Hong Kong phrase of encouragement.

The upcoming vote will be the first since Beijing's top decision-making body in March approved an overhaul of Hong Kong's electoral system -- in effect barring anyone deemed "unpatriotic" from running. The sweeping changes included cutting the number of directly elected seats and screening candidates to ensure they put national interests first.

Western governments like the U.S. slammed the overhaul as an "assault on democracy" in the former British colony that was promised 50 years of autonomy under a "one country, two systems" formula when it was returned to Chinese rule in 1997. The electoral reforms were only part of a flurry of developments in 2021 that have blurred the distinction between the city and the mainland, narrowing the space for political pluralism and dissent.

The authorities see this election as another step toward "moving on" after the massive anti-government protests of 2019. The polls, meanwhile, have exposed a philosophical divide within what is left of the pro-democratic opposition.

Some believe it is necessary to work within the new system. Others reject it entirely.

Lau, whose sheepish grin can be seen on lime green campaign posters in the suburb of Tsing Yi, counts himself among the former. The 45-year-old is one of several self-proclaimed independent democrats, most of whom declined to be interviewed. He said he could not abandon the people of Hong Kong and would continue to advocate for universal suffrage and oppose police brutality.

"I don't want this to be a single-voice chamber," he said. "I have to play my part." Lau described the process of being approved by the revamped, predominantly pro-Beijing election committee to stand as "difficult." But he avoided giving details of what was discussed and what it took to secure the 10 nominations needed for eligibility.

While Lau has taken flak from pro-government forces, they may not be his harshest critics.

"Participating in an undemocratic election and you still have the face to call yourself a 'democrat.' Well, you're not," reads an online comment from a former democratic district councilor.

"You're just giving citizens a sugarcoated poison of false hope," reads another comment posted under his Facebook announcement that he is running.

The alternative, some argue, would be to boycott the election. The authorities considered the risk of a boycott, or a flood of blank votes, so grave that they outlawed calling for such protests.

"This regime is actually really afraid," said former pro-democracy legislator Ted Hui, who is now in exile. "They are afraid that citizens in any country are able to demonstrate their political powers." Arrest warrants for Hui and former district councilor Yau Man-chun, also in exile, were issued for encouraging a boycott. Police have separately arrested six people for the offense. 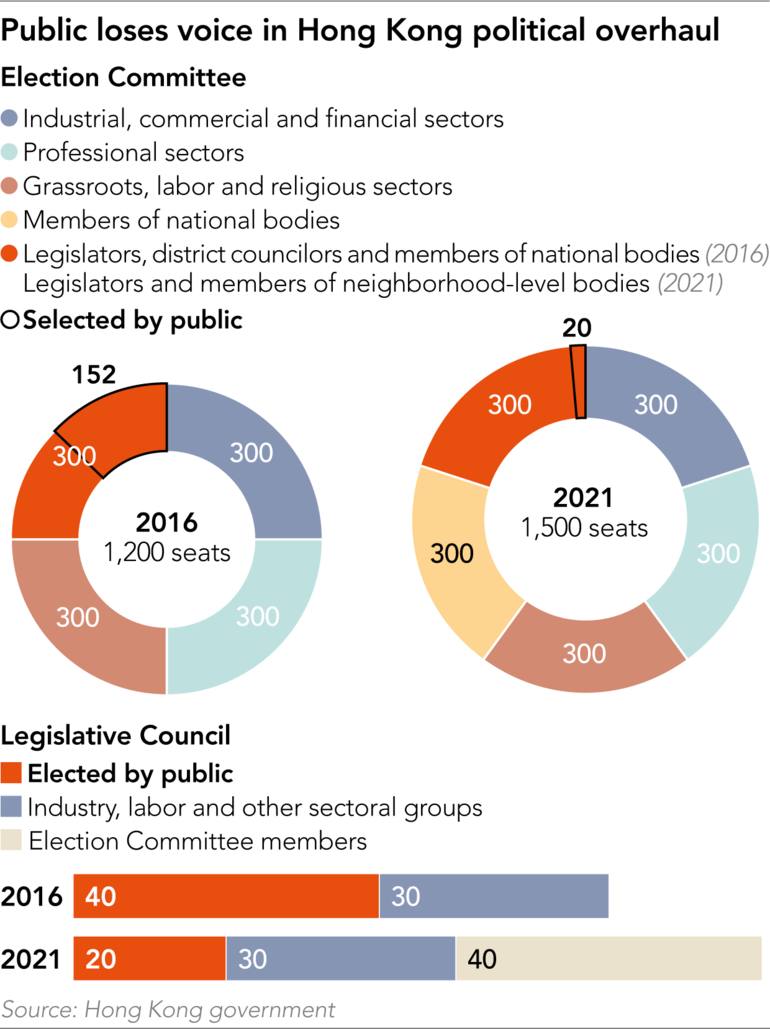 In any case, voter turnout on Sunday is predicted to hit a historic low, and according to the Hong Kong Public Opinion Research Institute, more than 60% of residents have no clue who is running in their district. Passionate political engagement and the democratic movement of the last 24 years seem like a distant memory -- the city brought to heel by the strict national security law Beijing imposed at the end of June 2020.

The law triggered a relentless clampdown that has only accelerated this year.

Since the law was enacted, 155 people have been arrested on national security grounds, with over 90 formally charged. Primary and secondary school curricula have been revised to instill love for the "motherland" and foster a better understanding of national security. Facing intimidation and a growing threat of prosecution, more than 60 civil society organizations -- including trade unions, media groups and religious associations -- have dissolved. Rights group Amnesty International announced it would exit the territory by the end of the year.

"There's just no more room for any civil society engagement in this political landscape," said one former nongovernmental organization worker, who spoke on the condition of anonymity. "Everyone is depressed and lost."

Traces of the 2019 protests have been wiped from the streets, and the demonstrators are long gone, yet the city remains on heightened alert. The police budget rose nearly 20% in the past two years. The government allocated an extra $1 billion to shore up national security while staying tight-lipped on how the money would be spent. A national security office, which operates outside local laws, is set to expand into a 11,520 sq. meter permanent space. National security has been made a top priority across all government departments.

Segments of the public are doing their part: Police have received more than 200,000 tipoffs since a national security hotline was launched last year. The judiciary is not immune. The government now has greater power to intervene in trials under the national security law, picking judges to handle cases and removing High Court juries. "The HK courts are no doubt less independent than before," said Eric Lai, Hong Kong Fellow at Georgetown Center for Asian Law.

Three people so far have been convicted on national security charges, one for just chanting slogans. Heavy sentences ranging from three to nine years have set a harsh precedent, lawyers told Nikkei Asia.

Pressure on the media is both overt and subtle. The city's largest pro-democracy newspaper, Apple Daily, closed earlier this year after executives were detained and assets were frozen.

Many journalists and residents say RTHK, Hong Kong's public broadcaster and once a trusted news source, has become an unrecognizable government mouthpiece. A bureaucrat with no media experience was appointed director of broadcasting in March. New editorial guidelines were introduced to ensure reporters toe the party line. Programs deemed inappropriate, such as an investigative documentary series and a satirical show, were axed, leading to an exodus of staff.

"Censorship is everywhere," said one former senior journalist at RTHK. "It's becoming more and more direct and involved everywhere."

While critics lament Hong Kong's direction, proponents of a firmer government hand argue all this was necessary to put the city "back on track." As one pro-establishment lawmaker put it in July: "If it's a police state, why not? I don't think there's any problem with a police state." 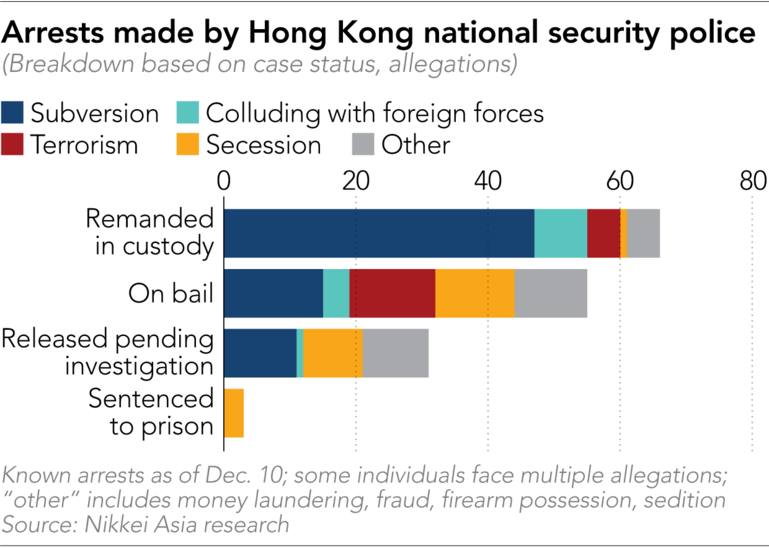 A source close to Beijing told Nikkei that the "pendulum has swung" and Chinese authorities no longer feel the need to operate covertly. He said the Legislative Council election will be watched closely to ensure things run smoothly and to "see the spirit and improvement of the law carried out."

The authorities in Beijing "don't like troublemakers," the source said. "They want proactive, pragmatic people who stand for the general population and their livelihood, rather than individuals and their ideologies."

Bernard Chan, a Hong Kong government adviser, said the city's development had stalled and regional competitors were moving ahead, upsetting the central government.

"Beijing is expecting the next administration to fix Hong Kong issues," Chan said pointing to housing as one of the key concerns. "Now [the administration] has no excuse to say the opposition stalled this, stalled that. Beijing's expectation is to fix the problems."

Even before the election, the makeup of the Legislative Council had been radically altered, allowing all sorts of bills to sail through. Pro-establishment legislators boast a record 48 passed in the year's final session, with the chamber void of opposition after some pro-democracy legislators were arrested and the remainder resigned or fled.

The new laws have, for example, enabled the government to ban films deemed contrary to national security; made it illegal to insult the Chinese flag on the internet; granted immigration officials unlimited powers to prevent people from entering or leaving; and forced civil servants to swear loyalty to the government. Chief Executive Carrie Lam in October vowed to further revise local laws to target national security threats.

"It's a very heavy feeling," Hui, the exiled legislator, said. "When LegCo becomes a single-sided chamber and rubber-stamp legislature, all the draconian laws can just be passed. ... There are no checks and balances." A billboard promotes the Legislative Council election by Victoria Harbour. The Hong Kong Public Opinion Research Institute found that more than 60% of residents have no clue who is running in their district.   © Reuters

Candidates in the race say they disagree. Dr. Simon Hoey Lee, who is running for a seat selected by the election committee rather than the public, admitted the new election model has been "Sino-cized" but insisted accountability would be enhanced with a more representative legislature. Although some have raised concerns about the atmosphere in Hong Kong driving away international business, he argued the changes were necessary for the city's long-term stability and economy.

"Hong Kong is a great place, but the development is getting slower," the pro-establishment candidate said. "That slow pace was down to a factor of internal friction," referring to filibustering by the opposition.

Some Hong Kongers appear to have voted with their feet. With Western countries like the U.K. having opened immigration pathways in response to the crackdown, nearly 90,000 residents left in the year through June 2021, marking the biggest outflow since record-keeping began.

A palpable sense of sadness hangs over the territory. Sunday's "patriots only" polls are likely to elicit more condemnations from the West. But Xia Baolong, director of the Hong Kong and Macau Affairs Office, sought to preempt any criticism with a blunt statement that what happens in Hong Kong is China's business alone.

"As for those anti-China members who have forgotten their ancestors and colluded with external forces," Xia said, "no matter where they flee, they will eventually be nailed to the pillar of shame in history and be punished as they deserve to be." 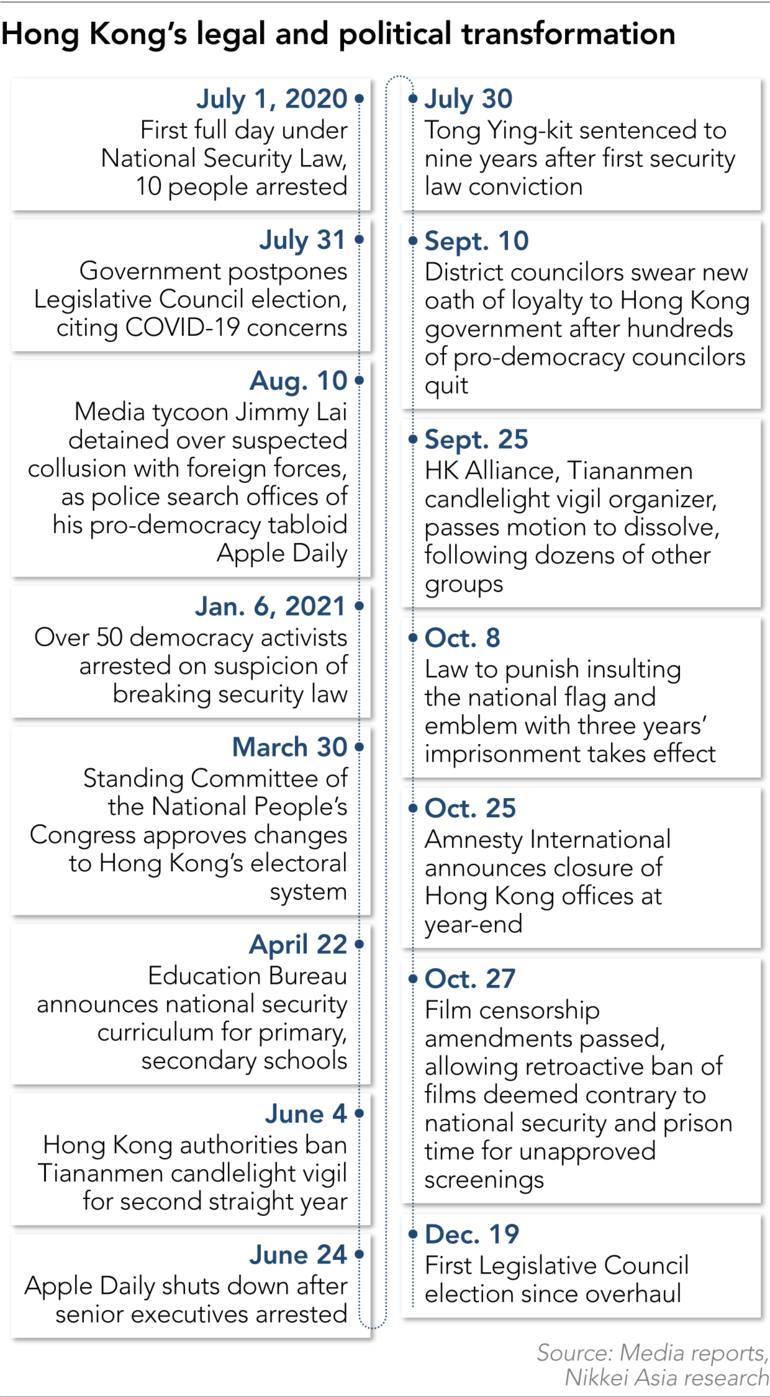