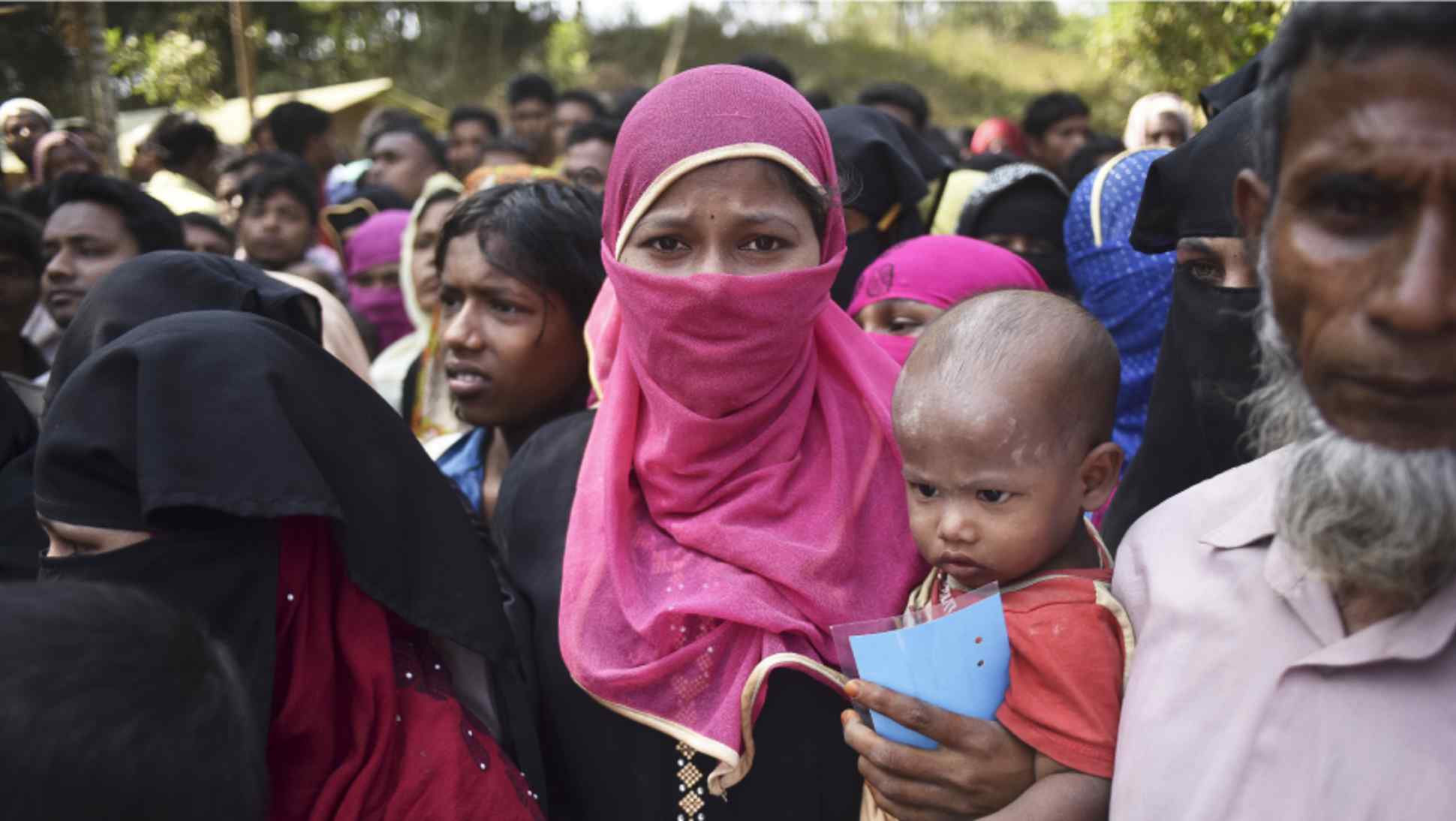 Pandemic threatens aid to both poor host communities and refugees

Social media has sometimes been equally hysterical. One college teacher posted on Facebook that lack of awareness about COVID-19 among Rohingya refugees from Myanmar "will lead to our collapse."

In August 2017, more than 740,000 mostly Muslim Rohingya fled a brutal military crackdown in northwestern Myanmar's Rakhine state and entered Bangladesh as refugees. The United Nations described it as a "textbook example of ethnic cleansing." Bangladesh already had 200,000 refugees from earlier Rohingya exoduses that began in the 1970s.

The novel coronavirus pandemic has exacerbated resentment in the densely populated country toward the refugees, and also brought further uncertainty to their chances of repatriation.

The Rohingya have meanwhile been exasperated at the lack of consultation by Myanmar, Bangladesh and the UNHCR. Refugee leaders feel their views were sidelined in any discussions as early as November 2017 when repatriation was first addressed.

Abdul Mozid, a rural physician, runs a drug store near Kutupalong camp, a sprawling settlement made of bamboo and plastic sheets that is home to over 500,000 refugees. "Camps are like slums," he told the Nikkei Asian Review. "People are scared that this will spread the coronavirus." Rohingya children exist in conditions that are as bad or worse than slums elsewhere.   © Reuters

But some officials are bullish. Mahbub Alam Talukder, Bangladesh's commissioner for refugee relief and repatriation, credits the efforts of officials and aid groups, as well as restrictions on movement, in keeping the numbers of confirmed cases and fatalities low in the refugee camps.

As of July 4, five Rohingya had died of COVID-19 -- about one-seventh of deaths in surrounding communities. The number of confirmed cases outside exceeded 2,700 compared to just 52 in the camps.

The pandemic is far from done, however, and the World Health Organization says Bangladesh has yet to peak. Manish Kumar Agrawal, Bangladesh director for the International Rescue Committee, a non-governmental organization based in New York, told Nikkei that low testing -- fewer than 10 a day -- masks the actual situation in the camps, where population density is 70,000 per sq. km -- 1.6 times higher than aboard the Diamond Princess cruise ship.

Researchers from Yale University have also reported that 25% of camp residents have reported at least one symptom of COVID-19 infection.

Locals are meanwhile fretful because Rohingya come out into their communities to work and shop. Some villages have formed committees to identify the outsiders and send them back to the camps.

Abdur Rahim, a Rohingya community leader, denied allegations that Rohingya were roaming about. "We can't move anywhere," he said, reminding that people in the host community who travel from Cox's Bazar to places like Chittagong and Dhaka are more likely vectors of the virus.

In a report based on interviews, advocacy groups Translators Without Borders and BBC Media Action quoted a woman who said people in her Ukhiya subdistrict community avoid contact with the Rohingya because they are perceived as having brought the deadly pathogen.

Empathetic Bangladeshis welcomed the last wave of Rohingya at the urging of Prime Minister Sheikh Hasina Wazed, but over the intervening years that warmth has gone. There has been increasing anger over the damage to farmland and forests, perceived inflationary pressure on essentials, and depressed wages caused by more competition. Bangladesh's Prime Minister Sheikh Hasina Wazed implored Bangladeshis to be empathetic when Rohingya refugees poured into the country from Myanmar in 2017.    © Reuters

Even before COVID-19, people in Ukhiya and Teknaf, another subdistrict, had come to resent humanitarian agencies doling out aid to refugees while ignoring the poor locals surrounding them.

"I think the reactions we are observing now are just a continuation of those frustrations," A. Mushfiq Mobarak, an economics professor at Yale University in the U.S., told Nikkei.

"This is undermining a particular community," M.A. Razzaque, head of research at the Policy Research Institute of Bangladesh, a Dhaka think tank, told Nikkei. Razzaque co-authored a UNDP-commissioned study on the impact of the Rohingya influx on the host population, and has urged international organizations to scale up aid to both the Rohingya and local people in a bid to reduce tensions.

The danger of refugees being accused of spreading the disease is well recognized. "While we understand fears associated with the spreading of the disease, discrimination cannot be the answer," Nicole Epting, senior coordinator with the Inter Sector Coordination Group (ISCG), a UN-led coalition of humanitarian groups, told Nikkei.

Chowdhury Rafiqul Abrar, a professor of international relations at Dhaka University, said the Rohingya are being "unjustifiably" labeled as virus spreaders. He described the allegation as "contrary to reality." Any hate speech should be countered by facts, he argued. For example, Bangladesh's first case was reported on Mar. 8, but COVID-19 was not detected in the camps until May 14.

Abrar points out that resentment of the Rohingya often overlooks the fact that they are survivors of genocide. "They didn't come here by choice," he told Nikkei. Rohingya refugees shout slogans as they mark the second anniversary last year of their flight from Myanmar at Kutupalong, the largest of 34 camp in Bangladesh's Cox’s Bazar.    © Reuters

The Rohingya are also being blamed for a crime wave. Cox's Bazar has become a hotbed of robbery, methamphetamine smuggling, human trafficking, abduction and other crimes that the refugees are allegedly associated with.

District police chief A.B.M. Masud Hossain connects the problem to older refugees who arrived in 1991 and have stronger connections to the local community. Last month, police killed four robbery suspects, two of whom were brothers of one of the most wanted criminals in Myanmar, according to Hossain.

A.K. Abdul Momen, Bangladesh's foreign minister, is meanwhile concerned by renewed military operations in Myanmar in Rakhine state and southern Chin state. Villages there have been torched and bombed. With more people internally displaced, there are fears of another exodus.

"These people are afraid of returning home," Momen told Nikkei. He accused Myanmar of reneging on its promise to create the "conducive environment" it pledged in November 2017 for a repatriation agreement brokered by the UNHCR.

World Bank and UN projections suggest refugees may be displaced for anywhere from 10 to 26 years, confirming this as a long-term headache for Bangladesh.

Forcing productive refugees to remain idle and having to feed them is not the "most cost-effective solution," Yale's Mobarak told Nikkei.

In view of the continuing hostilities in Myanmar, and the way bilateral negotiations have been conducted, Abrar describes repatriation as "not an option" for now.

Myanmar, a Buddhist-majority country, was hauled up at the International Court of Justice in The Hague in January over the atrocities perpetrated against the Rohingya after a lawsuit was filed by the small African nation of Gambia.

Attempts to send back small numbers of refugees have failed. The Rohingya have demanded confirmation of their citizenship, the return of their property and equal treatment under the law.

Mobarak is more proactive than Abrar. "Repatriation to Rakhine state should always remain on the table as the first-order policy option," Mobarak told Nikkei. "We shouldn't let the world forget this ongoing humanitarian crisis, which will only get bigger if Myanmar's actions continue."

Razzaque believes the international community should maintain pressure on Myanmar to accept its nationals back, and that the regime there should not be allowed to take "undue advantage" of the pandemic.

Foreign Minister Momen is dismayed by what he sees as international double standards. He notes the example of the U.K., where trade with Myanmar has grown elevenfold since 2015. "They are bankrolling the oppressor," the diplomat-turned-politician said. He also called out Japan, Singapore, Vietnam, and particularly the U.S. "This is unfortunate -- they preach human rights," he said.

Momen was equally critical of membership-based institutions like the UN for being toothless. The Security Council has failed to take tougher action on Myanmar for lack of consensus. "The world has become polarized," he said.

The UN is, however, helping the government upgrade treatment facilities. Isolation beds that serve both refugees and the host population have been increased from about 500 to 1,900. The UN has also tried to assuage local grievances. Between April and May, the World Food Program distributed food and cash to 125,000 people in Ukhiya and Teknaf. This month, it will expand those efforts to 375,000 people in six more subdistricts. More than 500,000 extremely vulnerable people should have benefited by September. 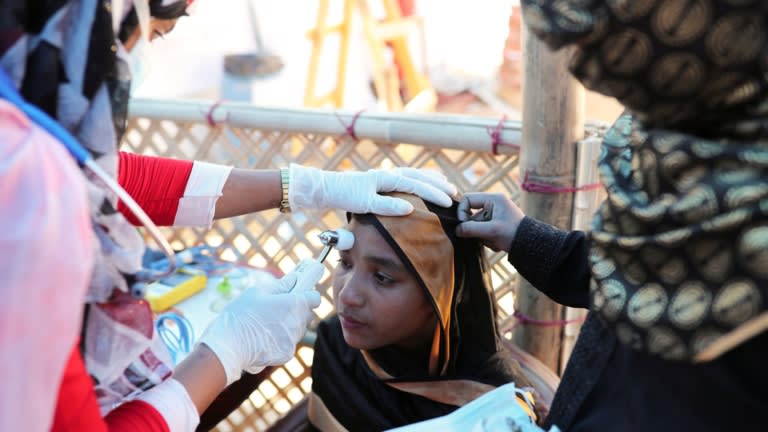 A Rohingya woman undergoes a medical checkup at the Samaritan's Purse clinic in Cox's Bazar.    © Reuters

"Their generosity in peacefully hosting the Rohingya is remarkable three years on and remains essential," said Epting, stressing the need for continued support to local communities. If the handouts fall away, Mobarak believes Bangladeshis will become more restive.

Resettlement options are limited. Stable countries take in only a small fraction of the international refugee population, even when there are colonial or military links. Since 2016, only 3% of refugees globally have been able to return and resettle, while only 2.5% of internationally displaced people managed to return to their home countries, according to UNHCR data. The displaced population sheltering in Bangladesh is 4.7% of the total worldwide.

Mobarak does see some room for creative approaches. For example, Bangladesh experiences labor shortages in some areas at planting and harvesting times, opening the way to the Rohingya for some productive seasonal employment.

A mounting concern is the slowness of donors to step up. As of June, the UN appeal for $877 million was only 29% funded. It is still chasing $389 million for humanitarian aid to cover the rest of this year.

Agrawal fears that sufficient assistance will not be forthcoming, particularly after the pandemic has caused so much economic damage globally. Richer countries now have unexpectedly serious problems of their own to ride out at home. "Secure and predictable funding is crucial," he told Nikkei.

COVID-19-related requirements will be presented at this month's Global Humanitarian Response Plan meeting in the U.S. with ISCG pushing for more aid to the Rohingya interventions.

Louise Donovan, UNHCR's spokesperson in Cox's Bazar, said the UN and its partners have been monitoring social tensions around the camps, and working with government authorities to minimize risks to refugee and host communities. Thousands of volunteers have been deployed to build awareness through public service announcements, phone-in broadcasts, and health and hygiene campaigns, she said.