A migrant worker in Singapore waits to be taken to a medical facility. Coronavirus outbreaks in dorms for foreign laborers account for 93% of the city-state's cases.   © Reuters
Asia Insight

From Malaysia to Japan, crisis highlights need for support and social inclusion

SINGAPORE -- For one Bangladeshi migrant worker, this year has been his "worst experience" in Singapore.

In April, he was forced into home quarantine for a month as the coronavirus burned through his dormitory. The construction site where he worked -- a government transport project -- was closed. After his roommates caught the coronavirus in mid-May, he took a swab test. The next morning he was told that he too had COVID-19, though he did not show any symptoms.

The man in his 30s, who did not want to be named, had never experienced so much upheaval in more than a decade in the city-state.

"I was not sure what happened," he told the Nikkei Asian Review by phone in late May. He was speaking from the Singapore Expo, a huge exhibition hall converted into a temporary coronavirus care facility.

The man is one of over 35,000 migrant workers in Singapore who have been infected. He is also one of the many vulnerable workers across Asia who have had to contend with sudden hardships -- not only COVID-19 but also abrupt layoffs or pay cuts. The crisis has highlighted the precarious lives of millions and posed a question for the economies that run on their backs: How will migrants be treated in the post-pandemic era?

The sheer number of virus cases among migrants in Singapore is forcing the city-state to take a hard look at their plight.

"Weaknesses that have been exposed include the inability of some employers to cope with their responsibilities with respect to providing adequate housing and food during the crisis, and the inability of the dorm management to cope with their responsibility to manage the health crisis," Walter Theseira, assistant professor of economics at the Singapore University of Social Sciences and a non-elected parliament member, told the Nikkei Asian Review. 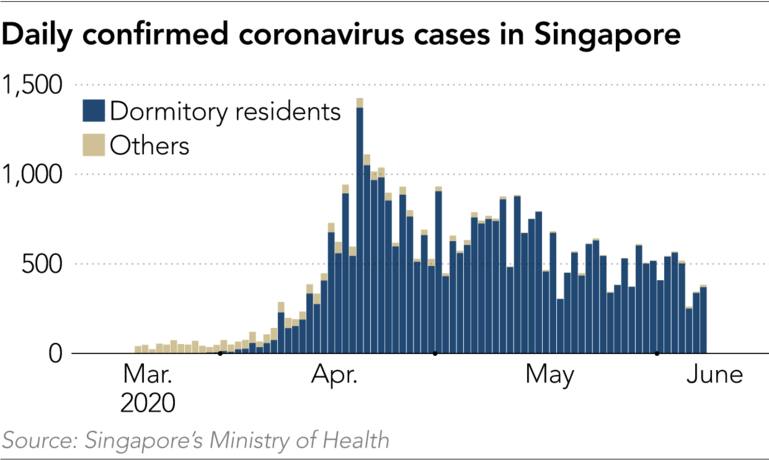 Singapore had 1.42 million foreign workers as of December, 1 million of whom held "low skill" jobs. The construction, shipyard and manufacturing sectors are all big employers of migrants. The workers generally come from low-income countries in search of better-paying opportunities to support their families.

Those who live in dorms are typically packed into rooms with 10 or more residents -- making social distancing impossible -- and are transported to work on lorries. Their cramped, often unhygienic living quarters have proved to be hotbeds for virus clusters. Dorm outbreaks account for 93% of Singapore's total cases.

"For a city that globally markets itself as a smart city, it is paradoxical that the very low-wage migrant laborers that build the architecture of the city live in such poor conditions, often carefully rendered invisible by being located at the outskirts," observed Mohan Dutta, director of the Center for Culture-Centered Approach to Research and Evaluation at New Zealand's Massey University. An ambulance carrying a migrant worker leaves a Singapore dormitory during the coronavirus outbreak.   © Reuters

Singapore, however, is not the only Asian country that relies on foreign laborers and faces pressure to take better care of them. Data from the International Labor Organization shows there were about 33 million migrant workers regionwide in 2017, making up 20% of the global total.

More than 2 million live in Singapore's neighbor, Malaysia, not including undocumented workers. The country is now grappling with a crisis similar to Singapore's dorm problem: clusters of coronavirus infections in overcrowded detention centers for migrants without papers. Last Thursday alone, 270 new cases among detained migrants were reported.

In Thailand -- which hosts nearly 3 million migrants from Myanmar, Laos and Cambodia -- thousands reportedly rushed to leave Bangkok due to layoffs or fears that they would lose their jobs during the coronavirus lockdown. Large numbers of migrants in the country work in the hospitality, retail and food industries. One support group estimates about 700,000 have been let go since coronavirus restrictions were imposed in March, according to local media. Some foreign workers in Japan have found themselves in a difficult position as well.

Facing an acute labor shortage, the aging country has actively sought to bring in more workers from overseas. As of October 2019, there were 1.65 million foreign personnel in the country, according to the labor ministry -- more than double the figure five years earlier.

Around 23%, or 384,000, were "technical intern" trainees from Vietnam, China, the Philippines and other emerging Asian countries. The program is designed to "transfer skills, technologies, or knowledge accumulated in Japan to developing and other regions and to promote international cooperation," according to a government website. But some critics claim it is used for cheap labor, and the coronavirus has created new issues. "Technical interns" from Vietnam work at a knitwear factory in the northern Japanese city of Mitsuke in 2019.   © Reuters

The trainees usually sign three-year contracts, and there are strict rules regarding termination. Since April, however, several interns from Myanmar have been pushed to sign agreements ending their contracts with factories and hotels as the businesses struggled to survive the downturn, according to a union for workers from the Southeast Asian country.

Jiho Yoshimizu, who runs a shelter for Vietnamese trainees, said the number of daily inquiries has surged to more than 10 -- sometimes dozens -- since the pandemic started. The number used to be one to three. She said there are good employers in Japan, but some companies "look at foreign trainees as young, inexpensive labor" that is expendable.

Yoshimizu explained that some employers have taken advantage of trainees' limited Japanese ability and made them sign resignations. Some interns have had to leave Japan as a result, she said, while others have sought help from the shelter.

Employment conditions for the 373,000 international students enrolled in Japan have also darkened. Many of them count on part-time jobs to pay for their accommodations and education, but the pandemic has wiped out translation work along with restaurant and hotel jobs.

While technical interns and foreign students are eligible for the 100,000 yen ($920) handouts the government has promised all residents, some may be unsure how to apply and the money will only carry them so far. 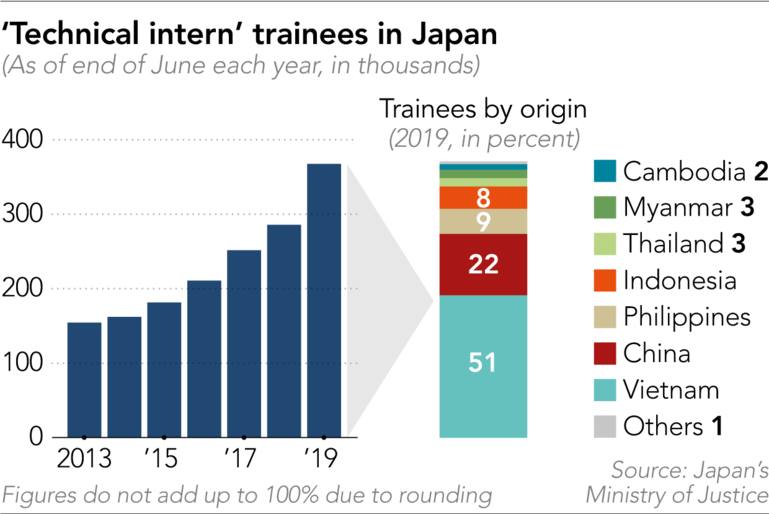 On top of all this are the struggles of internal migrant workers in the world's most populous countries -- China and India -- who have also faced waves of job losses. In India, thousands have walked hundreds of kilometers home due to lockdowns, with reports of numerous deaths in road accidents.

Regardless of where they work, millions are stuck on the margins of society. But just as Singapore's dormitory crisis has brought these widespread problems to the fore, there are at least glimmers of change in the city-state, even as it continues to report triple-digit coronavirus cases in the migrant community.

The government said on June 1 that it would build additional temporary housing for about 60,000 workers by the end of this year. It also plans to build new, permanent dorms for 100,000 people, with more space for each resident. This will take time, but the first 11 facilities are due to be built in the next two years.

Naturally, this will come at some expense. "The cost will indeed be higher," Lawrence Wong, the national development minister, said during an online conference. "So we will have to study the way to manage the cost increases. Certainly, employers and dormitory operators will have to be a part of this increase in cost, and in transition, the government may well look at providing some support." 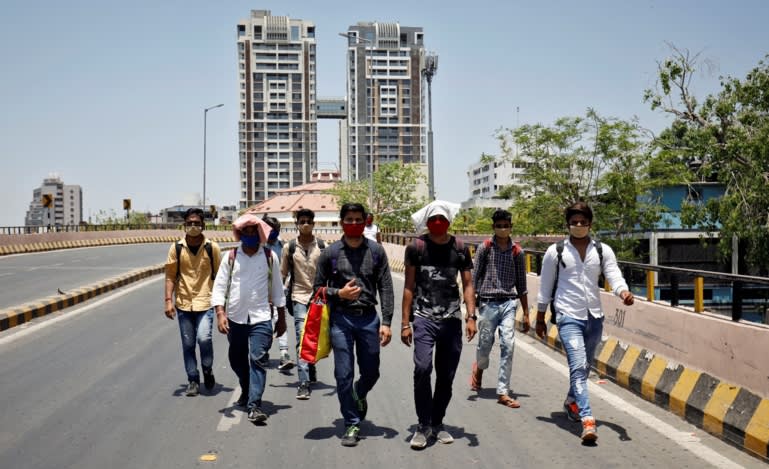 Migrant workers walk on an overpass on their way back to their home state of Uttar Pradesh, India. Numerous workers making such journeys amid the lockdown have been killed in road accidents, according to local media.   © Reuters

Ultimately, this could leave fewer jobs to go around. The government says it was pushing to reduce reliance on foreign workers even before the pandemic, especially in the construction sector, using automation and prefabrication techniques. Theseira at the Singapore University of Social Sciences said rising costs would inevitably lead to a shift away from migrant labor.

"Unless the higher costs can come out of company profits or taxpayer pockets, the market response to higher costs would be to cut back on some types of work in Singapore that are less economically viable with these costs," Theseira said.

Nevertheless, Wong stressed that plenty of construction work will continue to require manual labor. "It is very hard to find locals to fill these jobs," he said. "So I think it will not be realistic to talk about doing away entirely with migrant workers in the construction sector."

As long as Singapore maintains a foreign labor force, experts say, more support will be needed over the long term.

Massey University's Dutta told the Nikkei Asian Review that after COVID-19, Singapore needs "a fundamental reworking of the competitiveness ideology" -- in other words, the way the city-state capitalized on low-wage labor to become one of Asia's wealthiest economies.

"This means the reorganization of the economy, first and foremost, on the principle of worker rights," Dutta said.

Integrating marginalized migrant workers into society starts with governments but does not end with them.

A 2019 ILO report on public attitudes toward such workers in Japan, Thailand, Malaysia and Singapore found "quite low" support for them in all four countries. Significant proportions of survey respondents, for example, said migrants threaten their country's culture and heritage: 41% in Japan, 53% in Singapore, 58% in Thailand and 68% in Malaysia.

The ILO stressed the need to "promote inclusion, social interaction and community engagement with migrant workers in destination countries, including through changes to policy and practice."

The extent of such improvements might determine whether some workers -- like the Bangladeshi man who contracted the coronavirus -- stay or go after their traumatic pandemic experience.

The man expects his construction site to reopen soon, and he plans to stay in temporary housing arranged by his employer. But he said he has begun to think about leaving Singapore and setting up his own business back in Bangladesh.

"That process may take some time," he conceded. But he added: "Now is the time to think about doing something other than working for somebody. [I want to] create something and make some jobs for others -- in Bangladesh."