Singapore cultivates 'Silicon Valley of food' in a hungry Asia

SINGAPORE -- It was a warm Singapore evening and well-heeled diners at the riverside restaurant 1880 were feasting on intriguing-sounding dishes like "Forest Floor" and "Flooded Future." But the real stars of the show were two less flamboyant-sounding mains: chicken and waffle, and chicken bao.

When served, the pan-fried chicken was firm and pulled apart tenderly at the touch of a fork. This, however, was no ordinary poultry. It was made from stem cells taken from a chicken feather and grown in special bioreactors.

The diners were among the first few paying customers to feast on lab-grown chicken.

Kaimana Chee -- a chef at San Francisco-based food startup Eat Just, which created the chicken -- helped whip up that night's meal. "I cried because I never thought I would see it on a consumer plate within my lifetime," he told Nikkei Asia.

With "so much regulatory red tape" and global caution surrounding lab-grown meat, Chee, 43, was convinced getting the green light would take years. He figured his mission at Eat Just, which he joined in 2016, was to concoct inspiring dishes that would "plant the seed for another generation."

So in December, when Singapore became the only country to approve the sale of such protein, Chee was dumbstruck. Many industry observers were less surprised.

"It's no coincidence that Singapore is the world's first cultivated meat market," said Mirte Gosker of the nonprofit Good Food Institute Asia Pacific (GFI APAC). "The government has invested the resources necessary to create a welcoming ecosystem for food innovation."

Singapore's foray into lab meat and alternative proteins -- those that come from plants, insects, algae and fungi -- is part of a concerted push to shore up its food resilience.

The city-state makes up Asia's vanguard in the battle to ensure reliable access to food. United Nations estimates suggest over 350 million people across the region are undernourished while roughly 1 billion faced moderate or severe food insecurity in 2019 -- either dealing with uncertain access or actually running out of food, sometimes for days. The challenge has become more pressing since COVID-19 hit, worsening acute food insecurity in Asia and giving governments alarming glimpses of how a crisis can affect supplies.

One approach Singapore has taken is to diversify its sources. It now imports food from over 170 countries and regions, about 30 more than in 2004. Kaimana Chee, a chef at the San Francisco-based food startup Eat Just, says he never thought he would see lab-grown chicken on a consumer plate in his lifetime. (Photo by Sandy Ong)

When Teng and his colleagues began studying food resilience around 2005, the focus was on food security. "Nobody listened to us," he said.

It is a subtle but important distinction. Wealthy Singapore ranks fairly high on measures of food security -- 19th on the Economist Intelligence Unit's 2020 global ranking -- but that does not mean it can rest easy.

"The government's strategy was, 'If we increase GDP, and have the means to purchase food, then we don't have to worry because somebody will always have food to sell,'" Teng said. "This is fine and dandy if there is no disruption to [the food] production and supply chain."

But price hikes during the 2008 financial crisis, Malaysia halting fish exports in 2014 and other events have highlighted vulnerabilities. Then came the pandemic.

"Globally, COVID-19 has resulted in some disruption, as some source countries banned exports of certain food items to cater to their domestic needs or went under lockdown," said Melvin Chow, senior director of the Singapore Food Agency's Food Infrastructure Development & Management Division.

He added that increasing production under the 30 by 30 strategy would provide a buffer to mitigate disruptions from abroad. But growing more food is easier said than done in Singapore, which measures 50 km by 27 km. With the world's third-highest population density, it has set aside only 1% of its land for agriculture. The city, which has always been deft at working around its space and resource constraints, now intends to "leverage our science and technology capabilities to develop innovative solutions," Chow said.

This is where Eat Just and similar startups come in. "Plant-based and cell-based proteins require far less space and resources to produce the same amount of food as traditional food sources," said Bernice Tay, director of food manufacturing at Enterprise Singapore, a statutory board dedicated to the development of small and mid-size businesses.

Eager to foster food tech, the government has allocated up to 144 million Singapore dollars ($107 million) for food-related R&D programs until 2025. Enterprise Singapore has also partnered with several global accelerators, including Big Idea Ventures, which has a $50 million fund for alternative proteins.

In April, Singapore launched a Future Ready Food Safety Hub to study the safety of novel foods and support companies' research. And in September, NTU will begin offering undergraduates a one-semester course focused on the science and business of producing alternative proteins, in collaboration with GFI APAC.

Andre Menezes, co-founder of Next Gen, a Singapore-headquartered company that introduced soy-based chicken thighs in March, called the city a "complete ecosystem in a very small, concentrated island."

"Singapore is starting to position itself as the Silicon Valley of food tech," said Menezes, whose thigh product is now found in over 45 local restaurants. In February, Next Gen raised $10 million in seed funding from a group of investors including Singapore's state-owned Temasek International -- the largest splash yet by a plant-based food tech venture. The company in June expanded into Hong Kong, Macao and Kuala Lumpur. Not your average nugget: Singapore was the first country to approve lab-grown chicken like this, amid a push for greater food resilience. (Photo by Sandy Ong)

More than 15 alternative protein companies have set up shop in Singapore in the past two years. In addition to Eat Just and Next Gen, these include international players such as California dairy-substitute maker Perfect Day as well as homegrown Shiok Meats and Gaia Foods, which are working to produce cultured seafood and red meat, respectively.

Another pillar of Singapore's 30 by 30 goal is high-tech, indoor urban farming. Thirty-one such farms already exist -- 28 for vegetables, three for fish.

The fact that the farms are indoors makes them "resilient against some of the impacts of climate change," Chow said. They employ smart technologies that "allow us to grow more with less," with yields 10 to 15 times higher per hectare compared to traditional vegetable and land-based fish farms.

One farm, Commonwealth Greens, can harvest up to 100 tons of vegetables annually, close to 1% of all leafy greens grown locally. In high-ceilinged rooms of a large industrial building, it grows rows of verdant mustard, chard, sorrel and various lettuces in plastic containers. Each grow rack is roughly 1 meter long and paired with its own strip of LED lights, suspended from the ceiling like a series of bright vertical blinds.

The "brains" of the system lie at the front of each room: two sensors. One controls the air temperature, relative humidity, carbon dioxide and acidity levels. The other measures the amount and composition of liquid nutrients supplied to the greens.

"Our technology combines the use of the Internet of Things, which enables us to gather very rich amounts of data that is critical for the plants," said Sven Yeo, co-founder and chief technology officer of Archisen, the agritech company that runs the farm.

"When we grow crops, we have something called a crop recipe," he said. This is essentially a list of parameters -- light, pH, temperature, and so on -- that Yeo and his team refine to optimize a plant's growth so that it "maximizes its nutrition and flavor profile."

The hydroponics-based system consumes 95% less water and 85% fewer fertilizers than traditional, soil-based ones. Commonwealth Greens can harvest up to 100 tons of vegetables annually, close to 1% of all leafy greens grown locally. (Photo by Sandy Ong)

Proponents say indoor farms and alternative proteins offer better produce and cleaner meats, with minimal or none of the pesticides, antibiotics or hormones commonly found in today's food products.

"Consumers are increasingly more critical of the food they are eating," said Aileen Supriyadi, a research analyst at the market research firm Euromonitor International. "Especially with the recent COVID-19 pandemic and African swine fever cases affecting livestock in the region, consumers have grown more concerned with regard to food safety."

Cultured meat, in particular, has its skeptics. In a YouGov Omnibus survey of 1,068 Singaporeans in December, 42% of the respondents said they would not eat such meat, local media reported. A Euromonitor survey in 2020 found that 36.5% of Asia-Pacific consumers preferred all-natural products, compared with 33.3% in Europe and 28.4% in North America.

Some experts believe they can be a way forward for other Asian countries, too. Indoor farms are not new. NTU's Teng said there are more than 400 throughout Asia. But compact, high-yielding ones are especially useful in "highly urbanized cities with higher purchasing power, where real estate cost is high," Archisen's Yeo said.

Jakarta is a good example, according to Christian Prokscha, founder of Eden Towers, which opened a vertical farm there in February. "You can grow things on the hills outside Jakarta," he said, "but the problem is that you have a very long logistics route."

Additionally, Yeo says "the one big challenge" of indoor farms is the cost of facilities and sophisticated equipment. Singapore has provided generous grants over the years, including a SG$60 million fund launched in April that helps would-be farmers defray initial building expenses. But few Southeast Asian countries have pockets as deep as Singapore's.

When it comes to alternative proteins, high selling prices are another tall hurdle.

She went on: "Local producers now have the ability to source a nearly unlimited range of ingredients, process them in new and innovative ways, and manufacture the next generation of plant-based meat -- all in the same corner of the world." 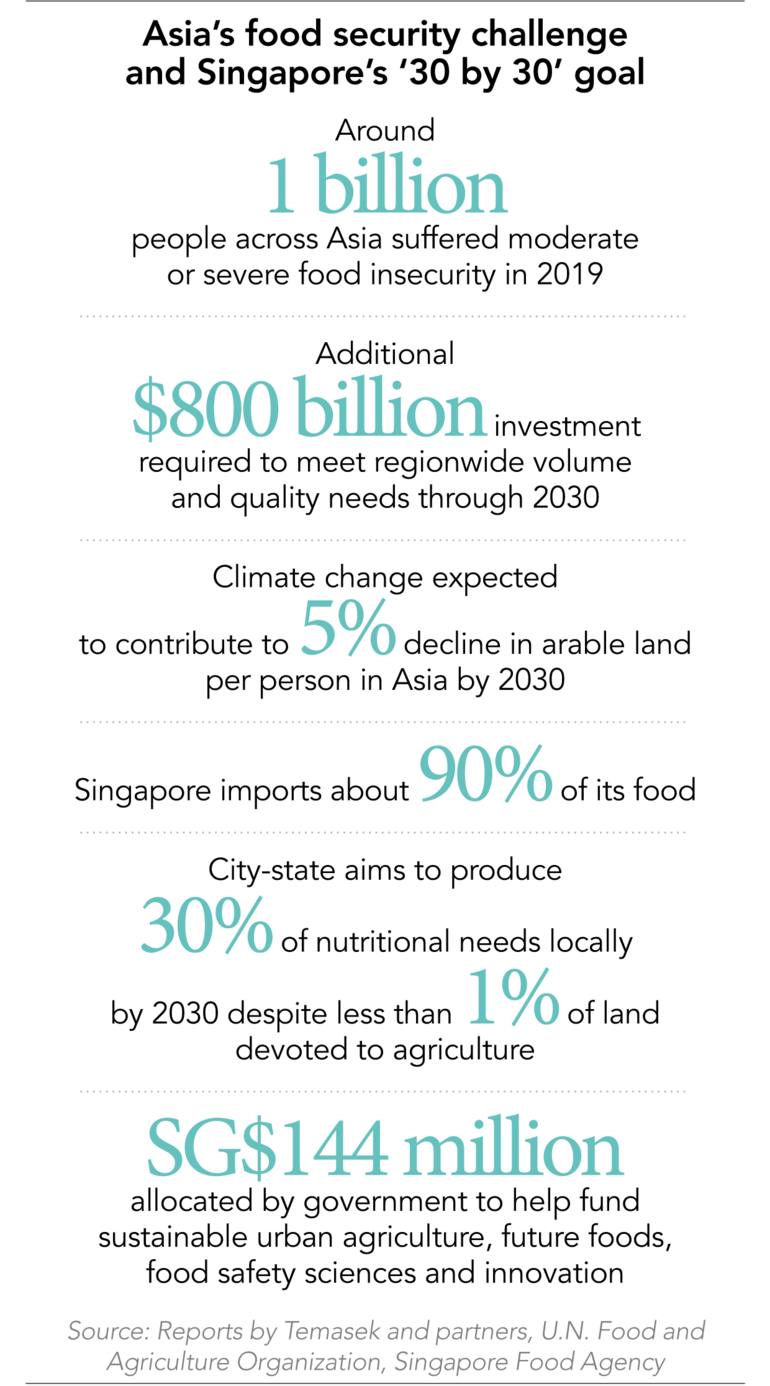