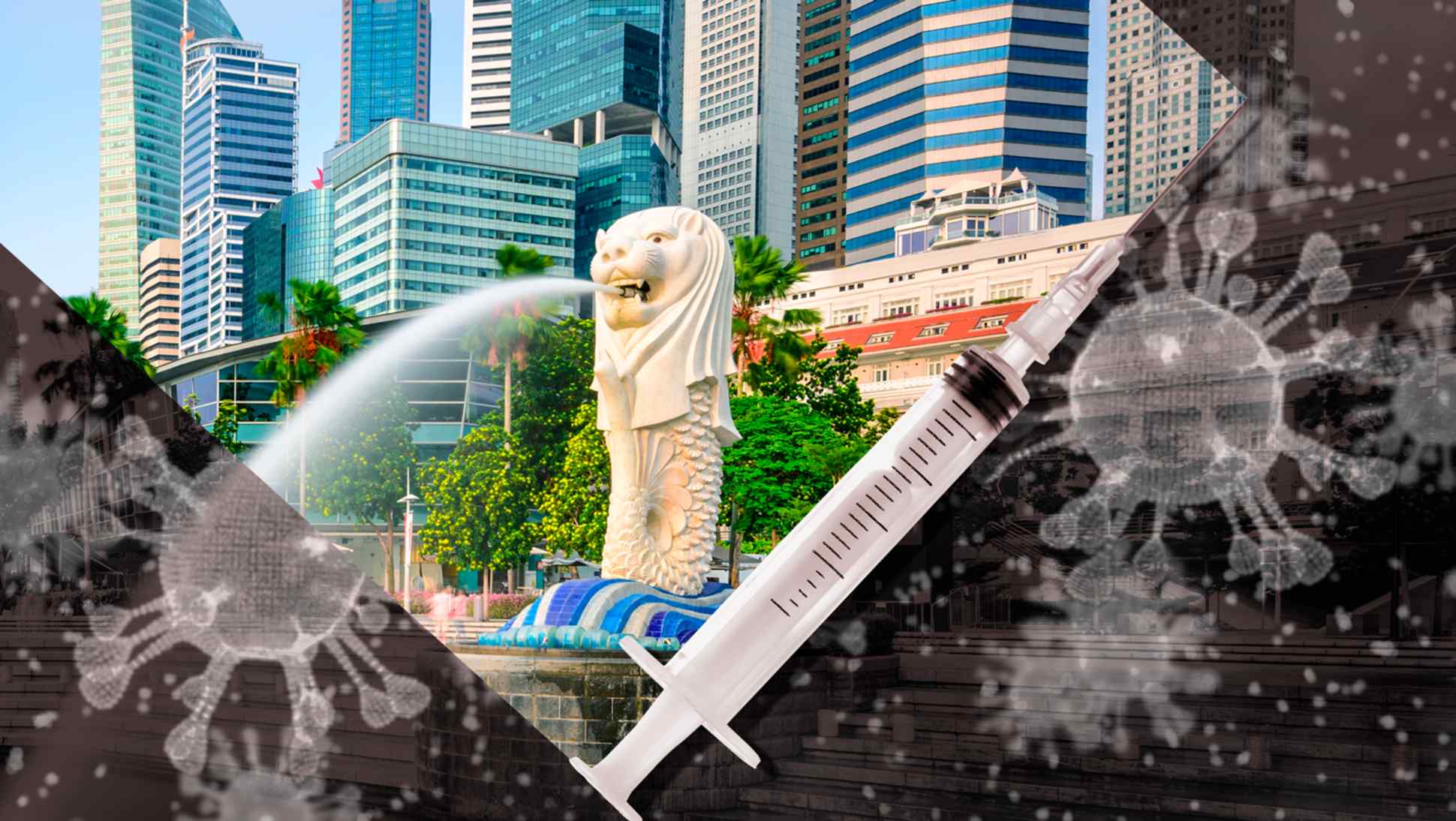 Singapore hopes its vaccination rate above 80% will allow it to leave COVID-19 restrictions behind, but for now it is focused on keeping infections in check.   © Nikkei montage
Asia Insight

Even if vaccines help city-state 'live with' the virus, long-term questions loom

SINGAPORE -- As pedestrians once again dwindled in Singapore's central business district on Sept. 27, the manager of a health food restaurant let out a sigh of frustration. "No one is coming back," he said.

In normal times, workers from nearby offices would be chatting over a light lunch of seafood and vegetables on rice. But renewed COVID-19 restrictions imposed that day made working from home the default, and limited dining in eateries to pairs -- less than two months after such rules were eased.

The restaurant had made it through the first year and a half of the pandemic. The manager wasn't sure it would survive much longer. He said he might have to "close because we are losing money over the year."

As one of the world's first countries to fully vaccinate 80% of its population against the coronavirus, clearing the threshold in late August, Singapore was set to accelerate its economic reopening. The government had devised a "living with COVID" strategy, outlined by virus task force ministers in June, under which it would treat the disease as endemic like influenza and restore a semblance of normal life.

Now, the authorities are fighting an exponential rise in infections, which began after the government relaxed some rules in August. A record 2,909 new cases were reported last Friday, more than 10 times the number a month earlier and marking one of the highest per capita rates anywhere. The rapid increase is partly due to frequent testing, and since 98% of new patients are asymptomatic or have only mild symptoms, the country of 5.45 million has not abandoned its plan to coexist with the virus. But it has hit the brakes.

"We had all hoped that we could put these restrictions behind us, especially with our high vaccination rates and with our plans to move forward to a COVID-resilient nation," Finance Minister Lawrence Wong, who co-chairs the task force, said when the government announced the rule-tightening on Sept. 24. "But the reality is that with the current infection trajectory, our health care system and our health care workers are facing many pressures."

Even if the government shows Singapore can live with COVID-19, longer-term challenges loom. As the health crisis changes the way the world does business, can a travel and trade hub find new ways to attract people and investment? Domestically, can Singapore address its aging population and improve the lives of low-wage workers? The People's Action Party, which has led the nation since independence in 1965, is seeking answers while facing a burning question of its own: Who will succeed 69-year-old Prime Minister Lee Hsien Loong?

In many ways, Singapore stands at a critical juncture.

"I think there is indeed soul searching at the highest levels of the government about building competitive advantages beyond some of our traditional strengths," said Walter Theseira, associate professor at Singapore University of Social Sciences. 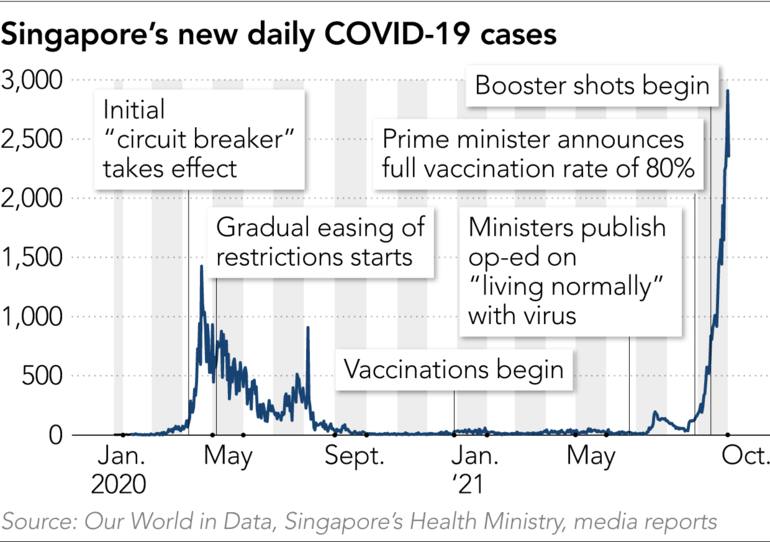 The pandemic has highlighted some of those strengths. Carefully calibrated safe distancing measures, including the use of digital technology for contact tracing, drew global attention as an example of a smart response. The city-state has limited its COVID-19 death toll to slightly over 100. And Singapore was the first major Asian economy to start vaccinations, in December, securing Pfizer-BioNTech shots initially and later adding Moderna.

Yet the crisis has also exposed weak links in Singapore's advanced economy and wealthy society. Explosive infections in crowded dormitories for migrant workers last year showed how much the construction, shipyard and other industries rely on low-cost labor. Global travel restrictions, including Singapore's own tight border controls, have not only dampened tourism and related businesses but also hindered inflows of new labor, blue- and white-collar alike. Population statistics released late last month revealed that the number of foreign nationals was down 10.7% on the year, to 1.47 million, as of June.

Growth was not exactly booming before COVID-19. Gross domestic product grew 1.3% in 2019, the slowest since the global financial crisis, amid disruptions in trade. Then, in 2020, Singapore suffered its steepest economic contraction on record, 5.4%.

The economy has since shown signs of recovery. The government in August upgraded its 2021 GDP projection to a range of 6% to 7%, from 4% to 6%, thanks to vaccinations and improving conditions in key trade partners. But the rebound is proving bumpier than expected. 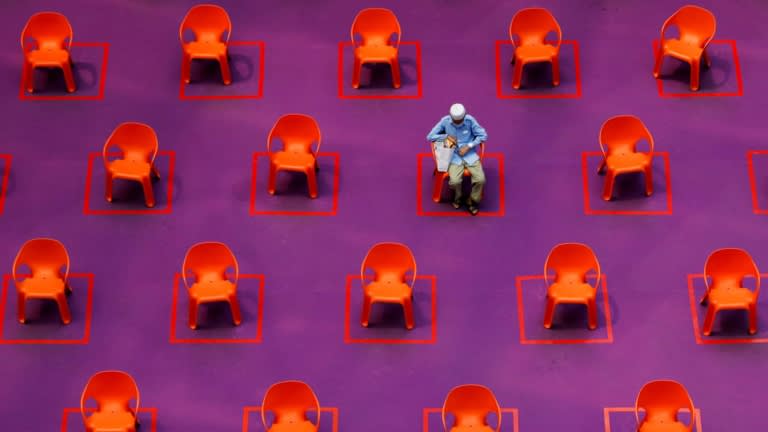 A man sits among empty seats at a free movie screening in Singapore on Sept. 29, after restrictions on social gatherings were tightened.   © Reuters

The latest tightening of restrictions "will likely hurt some of the services segments, particularly food and beverage, retail, recreation and hospitality," Maybank Kim Eng economist Chua Hak Bin said, while noting that these sectors constitute a relatively small portion of the economy.

External headwinds are gathering, too. China's economic slowdown bodes ill for countries like Singapore with strong business ties to the world's No. 2 economy. Singapore's largest bank, DBS Group Holdings, warned in a recent report that "slower China growth in [the second half of 2021] will affect export performance going forward."

Already, the year-on-year growth of Singapore's manufacturing sector -- core products include electronics, machinery and pharmaceuticals -- downshifted in August for the second consecutive month, to 11.2%. The country's benchmark non-oil domestic exports also slowed for the second month in a row, growing 2.7%.

"The transition from pandemic to COVID being endemic is expected to be tepid and uneven," DBS economist Irvin Seah said. More worrying for officials is persistent uncertainty over the viability of Singapore's economic model.

An attempt to preserve travel, one element of the model, has not gone according to plan. In February, a facility called Connect@Changi opened near Changi Airport as an international "bubble" for business. The idea was to have visitors fly in and stay on-site, attending meetings with local partners in rooms separated by airtight glass partitions.

But, for now, the complex has been converted into a care facility for COVID-19 patients without severe symptoms. This reflects both Singapore's rising cases as well as the slow rebound in travel demand. "The facility was intended for travelers, but given the tight border measures that are still in place, Connect@Changi adapted and repurposed itself," Health Minister Ong Ye Kung explained on Facebook.

While COVID-19 has stopped travelers from coming, authorities worry new global tax rules could keep companies away as well. 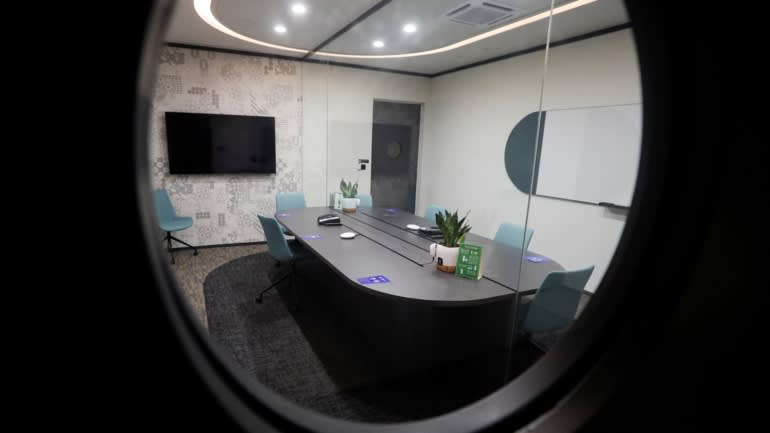 Connect@Changi, a facility meant to host safe international business meetings, is being used as a care facility for COVID-19 patients without severe symptoms for now.   © Reuters

In July, Finance Minister Wong was questioned in parliament about how a proposed global minimum corporate tax would affect Singapore's low-tax model. While the country's corporate tax rate of 17% is higher than the suggested minimum of 15%, many foreign companies appear to have benefited from lower effective rates.

"It will make it harder for us to attract investments and we have to work harder, particularly, given our size," Wong said, conceding some other locations "offer equally, if not more, attractive and compelling attributes." The hard work, he continued, could include "upgrading of our workforce, our infrastructure, our connectivity, our overall business environment."

Social trends may complicate any such efforts. Besides the sharp decline in foreign workers, the latest population statistics show a quickly graying population. Excluding foreign nationals, residents aged 65 or older accounted for 16% of the total, up from 15.2% a year earlier. Of particular concern is how to support lower-income seniors and encourage their participation in the workforce.

Tan Poh Lin, assistant professor at the National University of Singapore's Lee Kuan Yew School of Public Policy, said "generation-specific solutions" are necessary due to large gaps in education and income, including technology training "to narrow the perceived disadvantages of hiring older workers with outdated skill sets and expertise."

But she said in the near term, "especially due to the COVID-19 pandemic fallout, a mix of policies aimed at monetizing households' assets and government support would be more important for generating financial security for lower-income elderly.

"There is also an opportunity to take advantage of the shift toward more flexible work arrangements to increase elderly labor participation." 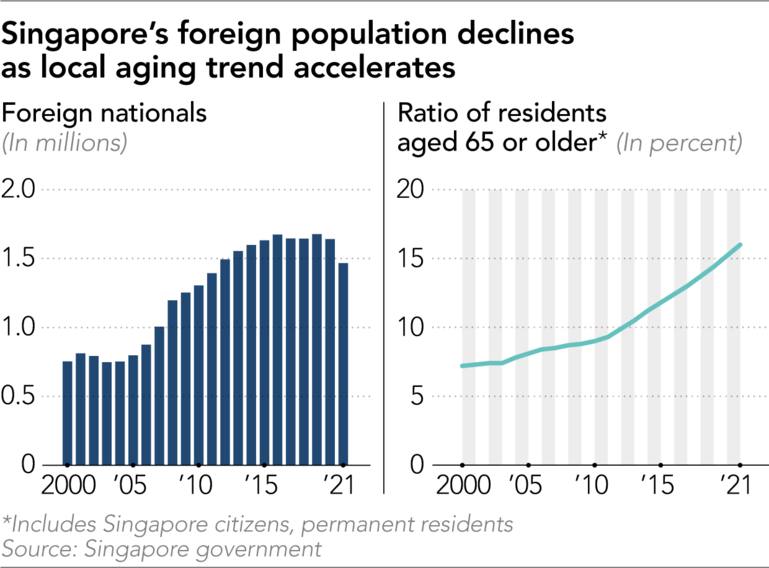 Prime Minister Lee emphasized worries over low-wage earners -- not only seniors but also informal "gig" workers like delivery drivers -- in his National Day Rally speech on Aug. 29. "Lower-wage workers are more stressed than others," Lee said. "They have less savings to tide over hard times. In the pandemic, their situation has been precarious."

Whether it is reducing inequality or stopping the COVID-19 surge, Lee and his ruling PAP may be feeling the weight of citizens' expectations more than usual.

For much of Singapore's history, the party could count on strong public support driven by a brisk economy, coupled with an election system that democracy advocates have long described as unfair. But in the 2020 election, the opposition won a record 10 seats, while the PAP's share of the popular vote plunged to 61.2%, close to its worst performance of 60.1% in 2011.

Arguably, the party's position has only become more uncomfortable. Its succession plan was thrown into disarray when heir apparent and Deputy Prime Minister Heng Swee Keat abruptly withdrew from consideration, saying the next leader should be someone younger. That "someone" has yet to be named.

After the opposition's breakthroughs last year, the PAP will be looking to confirm Lee's successor and convince the public Singapore is on the right path before the next vote, due by 2025. 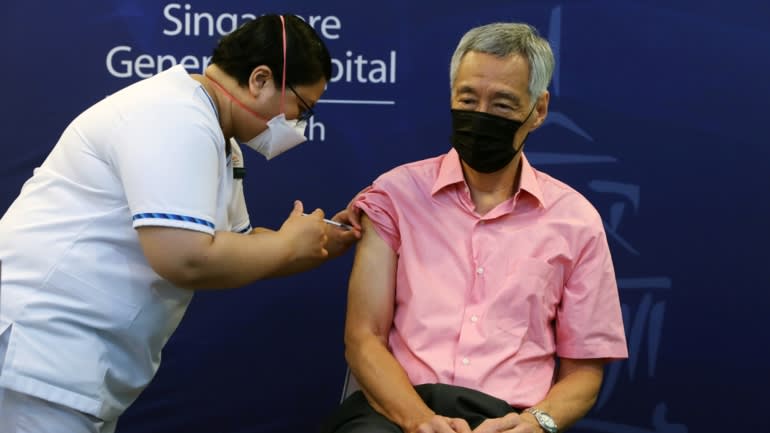 Experts stress that even in a world reshaped by the coronavirus, Singapore still has plenty going for it.

"Singapore's financial center continues to thrive even during the pandemic, strengthening its standing as a fund management and private banking hub," said Maybank's Chua. "Concerns over the national security law in Hong Kong are also diverting investments and funds into Singapore," he said, while the city-state is "benefiting from the reconfiguration of manufacturing supply chains toward ASEAN from China."

As the pandemic pushes businesses to go digital and pursue sustainable development, Singapore is doing its best to capture these trends, creating frameworks to support fintech and leading the region in green financing.

Singapore University of Social Sciences' Theseira argued the nation continues to offer a combination of safety, stability and economic vibrancy that is hard for its neighbors to match. He sees a major manufacturing opportunity as well, if Singapore can sharpen its innovation and productivity so it is not "competing just on price."

Theseira cautioned that "the way ahead won't be smooth."

"But I think COVID-19 has certainly thrown us opportunities as well as challenges, because it is more clear now that global business and production networks are really too concentrated and vulnerable," he said. "Singapore has a good chance of picking up momentum as it seeks to build capabilities in advanced manufacturing and digital technologies."