HO CHI MINH CITY/HANOI -- South Korea and Vietnam may not be natural allies, yet their bond is quickly becoming one of the region's deepest.

These are two nations divided by historical bloodshed, political ideology and global status. One is an advanced but rapidly aging Northeast Asian capitalist democracy long past a "miraculous" economic rise. The other is a youthful Southeast Asian one-party socialist state, still in the early stages of its own economic miracle.

Despite, or in some ways because of these differences, their trade has exploded 34-fold since 2000. Tourism is booming in both directions. South Korea's biggest manufacturers, starting with Samsung, have poured billions into Vietnamese plants as an alternative to China. Retailers and banks are targeting Vietnam's up-and-coming consumers.

Even the coach of the Vietnamese national soccer team is a South Korean transplant who has become an adopted hero.

The countries are marching toward a shared future. But as they draw closer, the potential for friction also grows -- over Vietnam's bureaucratic red tape, or South Korean companies' treatment of workers, or the unresolved legacy of the Vietnam War. 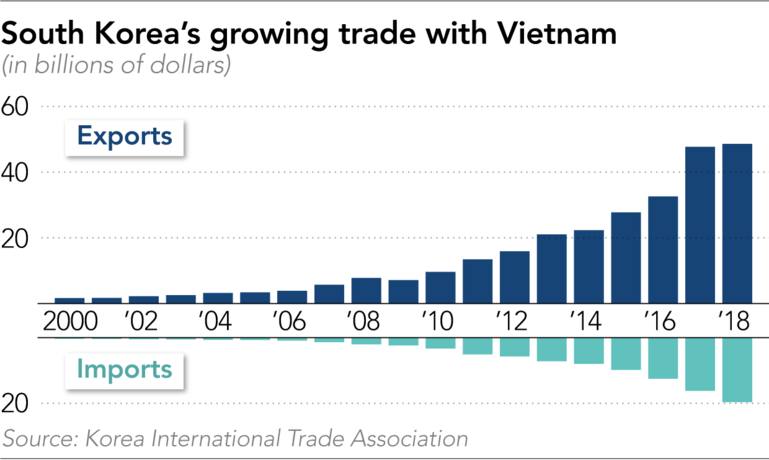 Ask 30-year-old Ho Chi Minh City resident Cao Tran Phuong Chi, and she will tell you that South Korea no longer seems like a foreign country to many Vietnamese. "South Korea has been a common word in Vietnamese daily life for years," said Chi, a retail worker who devours South Korean movies, TV dramas and K-pop music, along with food and cosmetics.

"It's well-known for its culture and entertainment, fashion and investment," she added.

To upgrade her career, Chi enrolled in a five-week program backed by South Korean retail conglomerate Lotte Group and the state-run Korea International Cooperation Agency at the Industrial University of Ho Chi Minh City. "The training course offers good stories, experience and programs which are being taught in South Korea," she said. Ties between the countries have blossomed to the extent that Vietnam was South Korea's No. 3 export destination for the second straight year in 2018, after only China and the U.S., according to data from the Korea International Trade Association. It is expected to top the U.S. in 2020.

South Korea in 2014 surpassed Japan as the top source of accumulated foreign direct investment in Vietnam -- a position it has not relinquished since.

"Many ASEAN countries are under the influence of Japan, but Vietnam is an exception," said Lee Tae-joo, president of the Re-shaping Development Institute, a Seoul think tank. "It has a special relationship with South Korea."

Much of this is thanks to South Korean manufacturers like Samsung Electronics and LG Electronics. Samsung has invested about $9.5 billion in the country since 2007, and produces over 150 million smartphones a year at its factories in the provinces of Bac Ninh and Thai Nguyen, north of Hanoi.

Phones have been Vietnam's top export since 2013. More importantly, South Korean investment has spawned a manufacturing ecosystem that promises to fuel the Vietnamese economy for years to come. 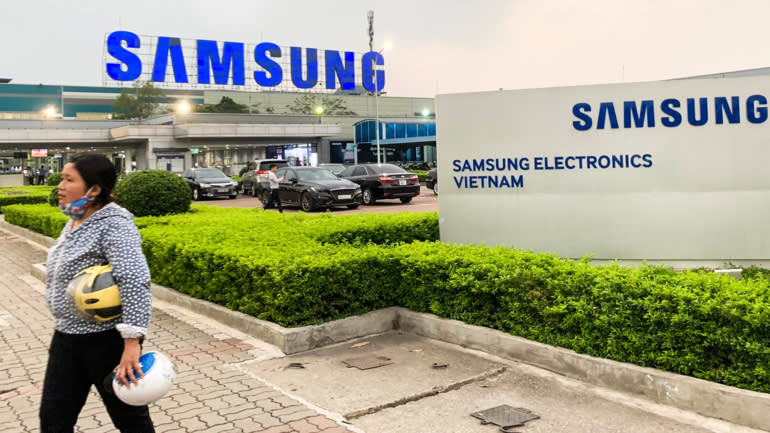 Samsung has invested about $9.5 billion in Vietnam since 2007. (Photo by Kim Jaewon)

"There were around 7,000 Korean firms operating in Vietnam, providing jobs for more than 700,000 workers and contributing around 30% to Vietnam's export value," Vu Ba Phu, director of the Vietnam Trade Promotion Agency, said at an investment promotion conference in Hanoi in late April. South Korean companies, he stressed, have "also helped promote the development of Vietnam's supporting industry."

Samsung did business with 35 "tier 1" local suppliers in 2018, up from just four in 2014. This year it is sourcing from 42, and the number is expected to rise to 50 in 2020. The suppliers, in turn, are branching out into other industries like automobiles, armed with know-how gleaned from working with Samsung.

For South Korean companies, which rushed to cash in on China's huge market and inexpensive labor in the 2000s, Vietnam offers even lower costs and ostensibly less political risk. The average Vietnamese manufacturing worker earned $3,812 last year, about a third of China's average of $10,520, according to the Hyundai Research Institute. And since Beijing clamped down on Korean companies over Seoul's deployment of a U.S. missile defense system, more are heading for Vietnam instead.

Few companies were hit harder by the defense dispute than Lotte, which agreed in 2016 to provide land for the anti-missile system -- part of a golf course in Seongju. The Chinese government later appeared to punish the company, over alleged fire safety violations and other issues, prompting it to sell most of the 99 Lotte Mart discount stores in China.

Now, there are 14 Lotte Marts in Vietnam, one of which is inside the 65-story Lotte Center Hanoi, which also houses a department store and hotel. The building has become a landmark in the capital, drawing thousands of people a day. When it comes to consumer market size, there is no comparison. China is home to around 1.3 billion people, well over 10 times the population of Vietnam. Nevertheless, Lotte is investing heavily in Ho Chi Minh City and Hanoi. It had poured in 1.8 trillion won ($1.5 billion) by 2016, and intends to spend an additional 1.2 trillion won by 2024.

"We advanced to China in the 2000s, relatively late [compared with] our rivals. That raised costs, leaving us behind in the competition," said Sim Young-woo, general director at Lotte Properties Hanoi, which developed and manages Lotte Center Hanoi. "So, we decided to reach the Vietnamese market early." From food to cosmetics, Korean products are popular among Vietnamese consumers. (Photo by Kim Jaewon)

South Korea's Shinhan Bank is the biggest foreign lender in Vietnam with $3.7 billion in assets, though it is still small compared with Saigon Commercial Joint Stock Bank, Vietnam's largest private bank, which had $18.2 billion as of the first quarter of 2019.

Shinhan showed its commitment in 2017 when it acquired Australia and New Zealand Banking Group's local retail unit. "Western banks are leaving this country because they focus on corporate and investment banking, but we are betting on growth in retail banking," said Lee Sang-hoon, a Shinhan director. "We grew explosively last year, creating enormous synergy effects."

Lee added, "Vietnam is a new growth engine for us because we cannot expect much profitability in our home country." The net interest margin of banks in Vietnam, a key indicator of profitability, was about twice that of lenders in South Korea in 2017 -- 2.9% versus 1.63%, according to Vietnamese research firm Biinform and Seoul's Financial Supervisory Service.

As the face of its brand, Shinhan chose one of the most recognizable South Koreans in Vietnam: soccer coach Park Hang-seo.

Last year, Park led Vietnam to the title in the AFF Suzuki Cup -- the Association of Southeast Asian Nations regional championship. He also took his side to the semifinals of the Asian Games, falling to the eventual champions: South Korea. 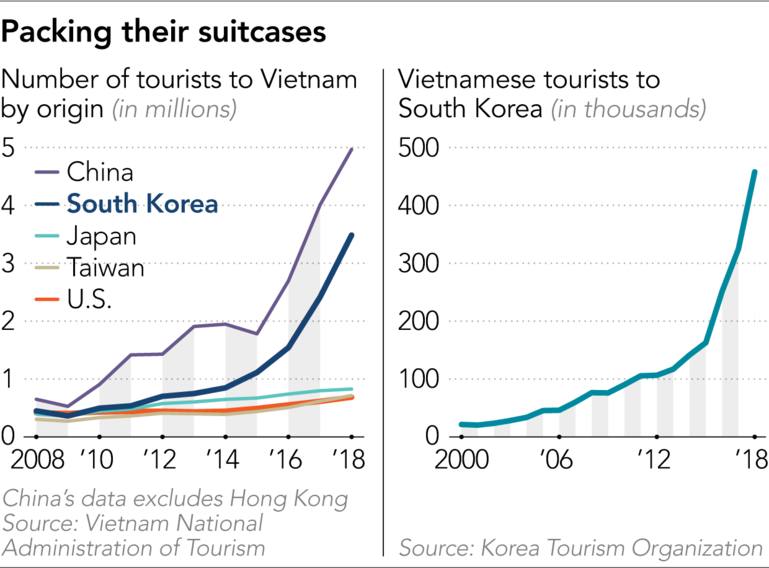 Afterward, South Korean President Moon Jae-in remarked, "I realized that the two countries have become closer friends through soccer by watching Vietnamese people wave flags of both Vietnam and South Korea." Moon is looking to boost ties with Vietnam and the broader ASEAN bloc under his "New Southern Policy," which seeks more well-rounded diplomatic ties beyond the U.S., China, Japan and Russia.

The Vietnam-South Korea relationship is not a one-way street. Hanoi has loosened regulations on foreign business ownership, opening the door for more Korean companies. A research affiliate of Vingroup -- one of Vietnam's largest conglomerates -- opened an R&D center in the South Korean city of Daegu in March.

Shin Sun-ho, principal at the Korean International School in Ho Chi Minh City, described the relationship as an "alliance connected by blood."

Shin said about 30% of the school's 1,900 pupils -- from kindergarten through high school -- are of mixed South Korean and Vietnamese heritage.

Keeping up with enrollment demand is a struggle. "South Koreans' rush to Vietnam is so huge," he said. "We will open a new building next year, but it won't be enough."

The principal has also felt the effects of South Korea Inc.'s exodus from China to Vietnam. "That's why we have so many children from China."

Shin said the school strives to raise "experts who are familiar with both Korean and Vietnamese culture and language. I hope they'll become leaders later, playing key roles in connecting the two countries." 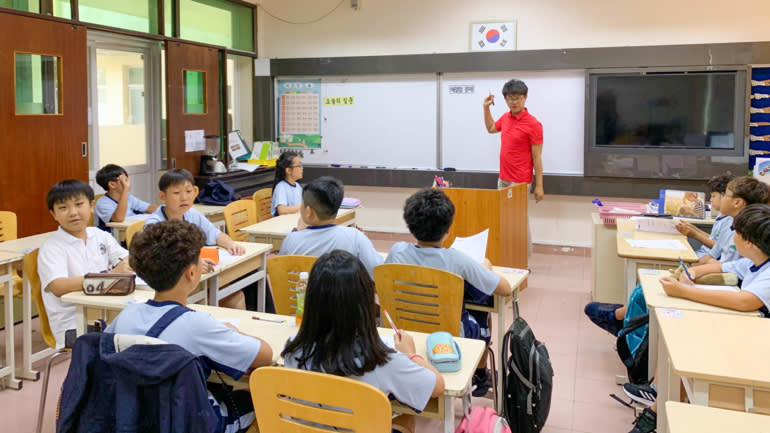 The Korean International School in Ho Chi Minh City strives to raise "experts who are familiar with both Korean and Vietnamese culture and language." (Photo by Kim Jaewon)

But even blood brothers have issues. Workers' rights are one friction point.

"Korean managers often treat Vietnamese workers harshly, raising some labor issues here," said a Vietnamese journalist who asked not to be named. "Sometimes they ask why employees go to the restroom so often."

At the same time, South Korean companies wrestle with the socialist bureaucracy. "It takes so much time to get approval from the authorities," said one Korean businessman on condition of anonymity. "They often demand money for making it swift."

Overshadowing the ties is a troubling prospect for Vietnam: the possibility that North Korea could one day take its place as South Korea's preferred production base, if sanctions are lifted. Samsung alone accounts for more than 20% of Vietnam's exports -- a level of dependence that worries Hanoi.

Some Vietnamese also find themselves burying grievances over South Korea's involvement in the Vietnam War on the U.S. side. "We do not forget," one Vietnamese journalist said. "We just ignore it for the future."

Shin said South Korea should address the past.

"South Korean soldiers committed many sins including killing civilians during the Vietnam War, a tragedy of modern history," he said. "Koreans should reflect and apologize for what they have done, which would pave the way for mutual interests in the future."