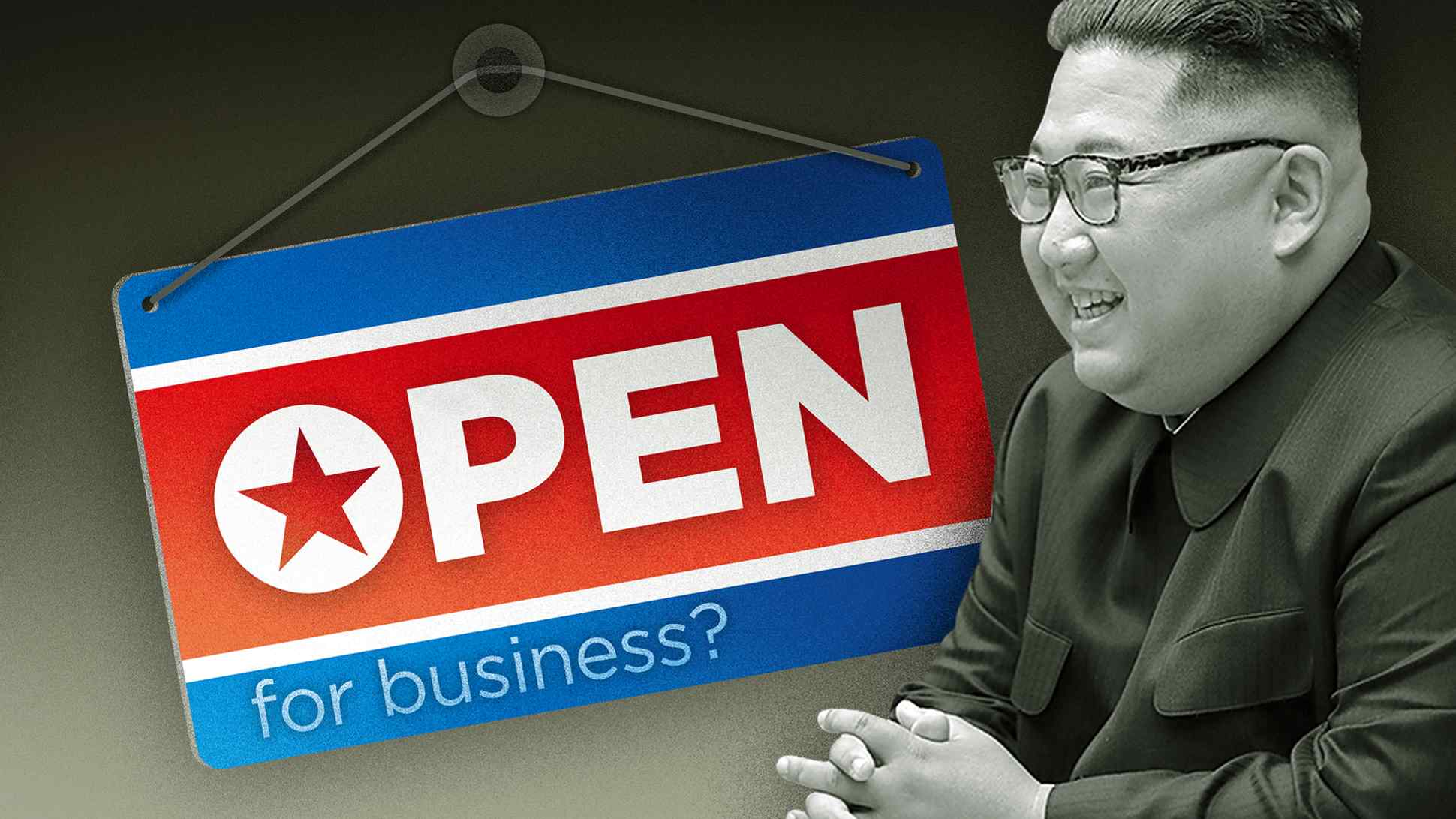 SEOUL -- The heir to the Samsung empire had a shock on his first visit to Pyongyang last month.

The words were almost exactly the same as Samsung's management philosophy of "Technology First, Talent First."

"I've never seen such a thing in any country in the world," Lee told North Korean Vice Premier Ri Ryong Nam at a Sept. 18 meeting. "I had a wall in my mind, but I now feel we are one nation."

Other corporate leaders on the trip came back making positive noises about the potential for doing business in the North. But they are also aware of the risks and hurdles.

Sanctions by the United Nations and countries including the U.S. and South Korea on the North are still in place, meaning that conglomerates such as Samsung, Lotte, SK, LG and Hyundai are unable to operate in the country. There are also the questions of whether the current diplomatic thaw will persist, and whether Kim Jong Un, the isolated nation's supreme leader, is serious about allowing foreign investment.

But at least on the face of things, Moon and Kim are making plans. And they say they want South Korea's large family-owned companies, known as chaebol, to get involved.

While Samsung's Lee was in Pyongyang, the two leaders agreed to develop the North's economy, penning an accord to link railways and roads along the coastlines on either side of the peninsula. Officials from Seoul and Pyongyang agreed on Oct. 15 at a meeting in the border village of Panmunjom to break ground on the infrastructure project later this year. There is one big snag: the bill.

Moon's government is also putting pressure on South Korean companies to invest in a wide range of inter-Korean projects, from construction and energy to telecommunications and tourism.

During their talks last month, Moon and Kim agreed to resume operations at the Kaesong Industrial Complex, a jointly run site just north of the border where more than 100 South Korean companies used to operate, employing over 50,000 North Korean workers. The park closed in 2016 as North Korean provocations escalated.

Visits by South Korean tourists to the Mount Kumgang resort region on North Korea's southeastern coast are to resume as well.

Despite Lee's outward exuberance, the largest company in South Korea has yet to release an investment plan. Sources close to Samsung said the company is cautious about going into North Korea.

"Samsung is in a difficult situation as it faces tough competition from Chinese rivals that offer similar products at cheaper prices," said a person in the industry familiar with the matter who asked not to be named. "For Samsung, it is more urgent to fend off them, rather than investing in North Korea." Analysts do say the Kaesong complex is attractive to South Korean companies because of its low rent, cheap labor costs and a large pool of able workers who speak the same language as their counterparts in the South. Hana says that minimum monthly wages for factory workers there in 2014 were just $63.8, lower than $95.8 in Vietnam (Ho Chi Minh City) and $194 in China (Qingdao). In South Korea's Ansan, the figure was more than $800.

"For Samsung Electronics, North Korea is a good candidate to set up production lines because it can offer cheap labor, has no language barrier and has the same time [zone]," said You Seung-min, chief strategist at Samsung Securities. "North Korea can play a role of manufacturing base in Asia in the global economic system."

You added that North Korea could replace Vietnam as Samsung's main production center for smartphones and displays, but said that's unlikely for some time due to sanctions.

"North Korea could draw investments from the international community and South Korea in the long-term, if it benchmarks Vietnam's success model," he said.

SK and Hyundai sound upbeat. "There could be many chances in North Korea," said SK Chairman Chey Tae-won.

Hyundai is keen to restart tours to Mount Kumgang and get started on other projects it arranged in Pyongyang. The conglomerate has good relations with the North's Kim family. The group's late founder, Chung Ju-yung, was born in what is now North Korea when the peninsula was under Japanese colonial rule (1910-1945) and provided aid and carried out economic projects in the North. There is even a stadium named after him in Pyongyang.

"Pyongyang, which I last visited seven years ago, has changed so much that I couldn't recognize it," Hyundai Group Chairwoman Hyun Jeong-eun said in a statement after her trip. "I know there will be many obstacles to overcome, but I feel that hope is ahead of us."

LG, which focuses on electronics and chemicals, is more guarded. The company, which had a television assembly plant in North Korea but pulled out in 2009 due to tensions on the peninsula, is considering the potential of North Korea but has yet to unveil any plans.

A source close to Lotte Group said the company sees opportunities in North Korea for its key businesses in the hotel, construction, food and retail sectors, but it also sees risks. "Lotte wants to make sure that the North Korean authorities guarantee that it can take back its profits and investments," said the person who asked not to be identified. Unless the sanctions are lifted, any plans would have to be put on ice. South Korean Foreign Minister Kang Kyung-wha said last week that her ministry is in discussions with the U.S. over this matter, but later backtracked.

The U.S. will not allow restrictions to be removed until North Korea denuclearizes, and while hope remains that Kim and President Donald Trump will come to an agreement at a planned second summit, they are unlikely to meet until after November's midterm elections in the U.S.

The best scenario, analysts say, is that North Korea opens its economy to become a normal member of the international community.

"North Korea may create its own economic development model by combining elements from the Chinese and Vietnamese models," said Yang Moon-soo, a professor of North Korean economy at the University of North Korean Studies in Seoul. "But North Korea is different from the two countries because it is run by a family and has a special counterpart in South Korea."

The Bank of Korea says the North may be fertile ground for South Korean construction companies, as longer life expectancy and demand for better housing would lead to a sharp increase in demand. The South Korean central bank estimates housing development in the North will be worth 57 trillion won in the decade from 2021. But Kim Suk-jin, a research fellow at the Korea Institute for National Unification, said the North Korean leader may not throw open the doors as much as Seoul hopes, out of concern about political influence seeping into the country.

"A closed country can open up its economy only when the regime is confident that it could still maintain its power and keep political stability," said Kim at KINU. "Compared to socialist countries in the past, North Korea is under a much more oppressive dictatorship system, which may not sustain political influence in an open economy."

Even so, trade is critical for the North Korean economy, particularly with its largest partner, China.

Annual exports from North Korea grew from just $2.3 billion in 2001 to a record $7.6 billion in 2014, according to the Bank of Korea. But the figure fell to $5.6 billion in 2017 as the international community tightened sanctions in the face of repeated missile launches and nuclear tests.

While Kim may also be treading carefully, he is quietly laying the groundwork at home to take advantage of any potential foreign investment from the South or elsewhere.

Since taking power in late 2011, Kim has pushed for economic development. His most notable policy has been to promote small-scale capitalism, allowing private markets known as jangmadang to spread across the country.

"North Korea institutionalized state companies' market economy activities by legalizing them after Chairman Kim took power," said Lee Seok-ki, a researcher at the Korea Institute for Industrial Economics & Trade. "The country is making efforts to realize the potential of the market."

A new phenomenon is the rise of a merchant class called donju. Defectors living in South Korea say they play a key role in the private sector by selling Chinese products and cereals as well as lending money.

"The existing business owners in the private marketplace can become key participants in the expansion of North Korea's manufacturing base," said Oh Suk-tae, an economist at Societe Generale.

But Yoo Chang-keun, a South Korean businessman, has a cautionary tale. The chief executive of SJ Tech, an auto parts company that operated at Kaesong from 2004 to 2016, said politics hampered his business.

"Kaesong's competitive edge is that it has good workers who speak Korean," Yoo said. "But I couldn't run the company under normal circumstances because the nuclear issue brought sanctions from the international community."