Southeast Asia awakens to the power of corporate competition

SINGAPORE/KUALA LUMPUR/MANILA -- When Mahathir Mohamad reprised his role as Malaysia's prime minister in May, he brought along a lengthy list of promises. Vows to root out corruption and review bloated China-backed infrastructure projects dominated the headlines. But Mahathir is also following up on a less-publicized -- but no less ambitious -- pledge.

He wants to break up monopolies.

Governments across Southeast Asia are with him, especially after a loud wake-up call earlier this year. The regional merger of ride-hailers Grab and Uber Technologies made it clear that authorities were ill-equipped to keep up with today's fast-acting tech companies.

Countries are recognizing that monopolies and anti-competitive practices threaten to undermine trade deals and hard-won economic integration. If they even the playing field, though, it could go a long way to making the bloc a more attractive place to do business.

Mahathir set things in motion right after his stunning victory. In May, his new government ordered state-affiliated Telekom Malaysia to share its vast cable ducts for high-speed broadband. This will save new operators the expense of laying underground fiber-optic networks, and save the government the burden of processing approvals. Malaysian Prime Minister Mahathir Mohamad moved quickly to open up the telecom sector after his election victory in May.   © Reuters

Other targets include Padiberas Nasional, or Bernas, the company that holds the sole concession to import rice to Malaysia. The government said it would take over this function once the concession agreement expires in 2021.

Mandatory inspections of used vehicles before resale, now carried out exclusively by one company, will be liberalized to allow multiple companies to handle them.

If there were any doubts about Mahathir's intentions, the government removed them in mid-October with a review of a five-year economic plan drawn up by his predecessor, Najib Razak.

The plan runs through 2020. "In the remaining period, focus will be given [to] reviewing and streamlining the role of state-owned enterprises and monopoly entities to meet the objectives of enhancing market efficiency and fair competition," the government said in its report.

Over in the Philippines, President Rodrigo Duterte is making similar moves. Aiming to break the duopoly in the telecom sector, the government will open bidding for a third operating license on Wednesday. Duterte himself, a few weeks before he took office in 2016, complained about the country's poor internet connections. "If you cannot improve on the services ... I would really agree to the coming in of foreign players," he said, adding that the same applied to energy. At least ten potential bidders including China Telecom have applied for the chance to take on PLDT, which counts Japan's NTT Group and Indonesia's Salim Group as key shareholders, and Globe Telecom, a joint venture between Singapore Telecommunications and local conglomerate Ayala.

The bidding is part of a broader effort to promote competition in the Philippines, led by an assertive new antitrust authority established in 2016.

Governments are focusing on competition to deliver "more economic benefits to their citizens," said Cassey Lee, senior fellow at the ISEAS-Yusof Ishak Institute and an expert on the region's competition laws. "Cross-border barriers to trade can be lowered through greater ASEAN integration, but anti-competitive conduct can reduce such benefits to citizens."

Economically, Southeast Asia may be one of the world's fastest-growing regions, but it lags behind in terms of ensuring fair play in business.

Singapore offers the most even playing field of any country worldwide, according to the World Economic Forum. After the city-state, there is a drop-off to Malaysia in 24th place. The Philippines ranks 60th. 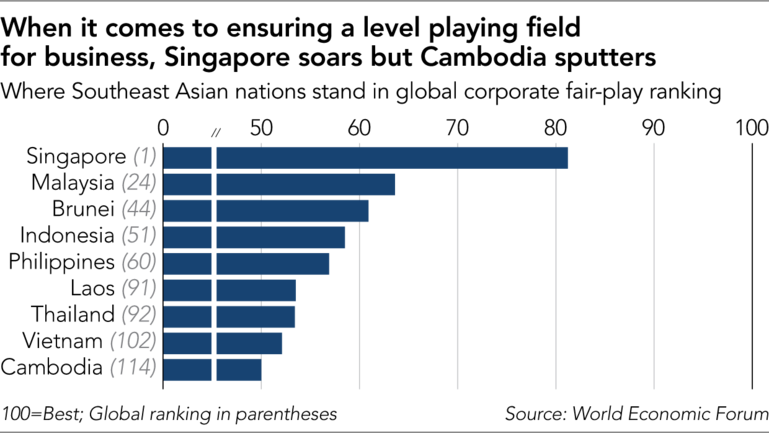 It was only in 2015 that the Philippines enacted its competition law, while Malaysia put one on the books in 2012, according to a 2017 report by U.K.-based multinational law firm Freshfields Bruckhaus Deringer.

Vietnam, which trails in 102nd place, has a new competition law set to take effect next July. The legislation will give the government authority over offshore business endeavors if there are implications for the domestic market -- an upgrade prompted by cross-border acquisitions.

Cambodia, the only ASEAN member that does not have a competition law, is in the process of establishing one.

The problem is that, although Southeast Asian countries are changing their ways, the business landscape is changing even faster, particularly in the tech sector. The deal between Singapore's Grab and the U.S.-based Uber showed how quickly the authorities can be overwhelmed.

On March 26, Grab and Uber announced they were merging their Southeast Asian operations. Grab would take over Uber's regional business. In exchange, Uber would get a stake in Grab. The companies moved ahead without notifying the relevant competition authorities in advance.

After all, it was not mandatory to do so.

Grab and Uber "proceeded to complete the transaction on March 26 and began the transfer of the acquired assets immediately, thus rendering it practically impossible to restore the status quo," the Competition and Consumer Commission of Singapore, or CCCS, pointed out later. Since Uber runs a digital service with few physical assets, pulling out of the region was a breeze. Just two weeks after the announcement, Uber ended its ride-hailing services in six of the eight countries where it operated, leaving Grab as the dominant player in most markets.

The result? Fares rose while incentives for drivers were scaled back.

Southeast Asian authorities gained valuable experience as they scurried to respond, suggested Toh Han Li, chief executive of the CCCS and this year's chair for ASEAN's competition agencies group. The Grab-Uber case "can be considered as the first significant case involving cooperation among ASEAN competition authorities."

He noted that Singapore, the Philippines, Vietnam and Malaysia exchanged information and helped one another assess the effects of the deal.

But the penalties are practically pocket change for Grab. Southeast Asia's most valuable startup expects to raise a total of $3 billion this year. A Grab motorcycle taxi in Hanoi: The company's regional merger with Uber highlighted the need for a more cohesive ASEAN antitrust framework.   © Reuters

Grab, after only six years in business, operates in eight Southeast Asian countries and its app has been downloaded more than 100 million times. Digital technology has made this sort of rapid expansion possible -- which means cases like the Grab-Uber merger are bound to increase.

ASEAN itself, as a bloc, recognized the significance of competition and cross-border mergers and acquisitions in 2015, when it compiled a blueprint for 2025. Member states aimed to foster a "competition-aware" region and to establish enforcement cooperation agreements.

Yet it took the Grab-Uber case to prompt meaningful action.

Burton Ong, associate professor of law at the National University of Singapore

The stakes are high. The ASEAN economy has been growing at an annual rate of about 5% over the last few years, but the pace may slow as markets mature. An effective framework for ensuring competition would help the region attract investors and maintain momentum.

Making that framework function properly is no easy task. Southeast Asia is not Europe, and each country has its own legal structure.

"ASEAN is an intergovernmental organization and member states retain full sovereignty over cross-border competition cases, unlike the European Union, which has powers to decide on [such] cases," said Toh at the CCCS.

At this stage, the role of ASEAN's competition agencies group is limited to setting guidelines for cooperating on enforcement, sharing information and resources, building capacity and so on.

Ong said another question is "how much political will the governments have." Each member government faces its own political pressures and domestic issues.

Even so, Ong believes a strong regional framework is crucial for continued growth.

"The countries need to come together and take advantage of the regional market in order to compete more effectively with the larger economies in Asia."