SINGAPORE -- Azlan Sohoni, a 47-year-old Singaporean, starts his day with a cup of Nestle's Milo chocolate malt drink, sweetened with one and a half teaspoons of sugar. At work, he downs five cans of Coca-Cola and a few more cups of Milo. He doesn't like Diet Coke and Coke Zero.

"I'm aware that drinking too much is not good for health, but I'm used to drinking sweet stuff," Sohoni said.

His government wants people like him to kick the sugar habit. Governments across Southeast Asia, in fact, are looking to impose taxes on sugary products as part of a drive to address rising obesity and diabetes rates.

The fear is that these health problems will lead to unsustainable medical costs. But Asian countries' campaigns to cut consumption of soft drinks and other sweet products are bound to impact companies and sugar markets -- in some cases, their own.

Already in Singapore, total health care costs are expected to jump by 10% in the fiscal year starting this April. Spending in this area accounts for 15% of the national budget for the year.

The outlays come as the city-state's Ministry of Health fights a "war on diabetes," declared back in 2016.

That year, the World Health Organization reported that 9% of Singaporeans aged 18 and older were diabetic, while 35% were classified as overweight. It is the No. 2 cause of health problems there, with potential for serious complications such as heart attacks, strokes and kidney failure.

This past December, the ministry said it is considering a sugar levy, as well as other measures such as advertising regulations and even an outright ban on high-sugar products. The WHO numbers for neighboring Malaysia were similar: 10% of the population had diabetes while 37% were overweight. In Thailand, the rates came to 10% and 32%.

The Malaysian government intends to go ahead with a sugar tax this year. "Nearly one out of two Malaysians are overweight or obese," Finance Minister Lim Guan Eng said in November, during his budget announcement for 2019. He proposed an excise duty of 0.4 ringgit (10 cents) per liter for sweetened beverages.

The government plans to target two types of drinks: those to which sugar or other sweeteners have been added in amounts exceeding 5 grams per 100 ml; and juices that contain more than 12 grams of sugar per 100 ml.

On top of improving public health, Prime Minister Mahathir Mohamad's government sees the tax as a new source of revenue as it looks to shore up its finances.

The original plan had been to implement the tax on April 1, but the start date has been pushed back to July to allow businesses more time to prepare. This year, though, Malaysia is likely to become the fourth Southeast Asian country to establish such a tax.

Brunei and Thailand created theirs in 2017, and the Philippines followed suit in January 2018. Vietnam is thinking about taxing sugary drinks, too. 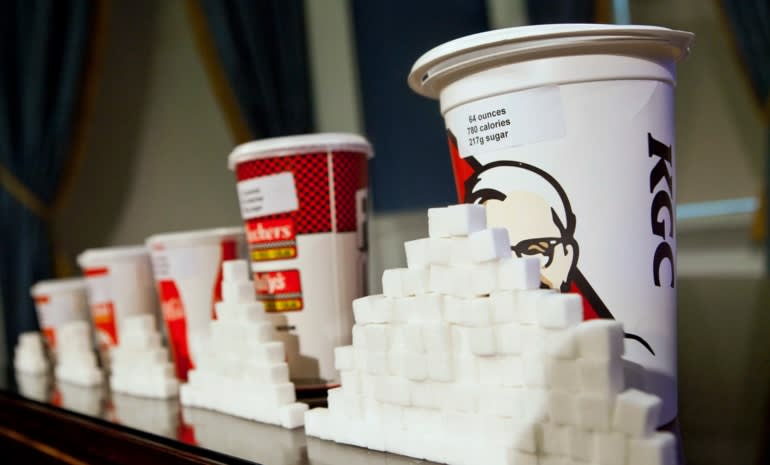 Four Southeast Asian countries either have a sugar tax or are about to impose one, and others are looking to follow suit.   © Reuters

The WHO sees sugar taxes as the right medicine: "Fiscal policies that lead to at least a 20% increase in the retail price of sugary drinks would result in proportional reductions in consumption of such products," the organization advised in 2016.

The country now charges 6 pesos (11 cents) per liter for drinks that contain caloric or noncaloric sweeteners, and 12 pesos for those with high-fructose corn syrup. The government excluded milk-based beverages and coffee mixes, which are popular among the poor.

Sales of taxed drinks at the country's ubiquitous mom-and-pop stores dropped by an average of 8.7% in February 2018, according to market research company Nielsen. The WHO praised the policy last year, saying it could prevent 24,000 premature deaths related to diabetes, stroke and heart diseases over the next 20 years. 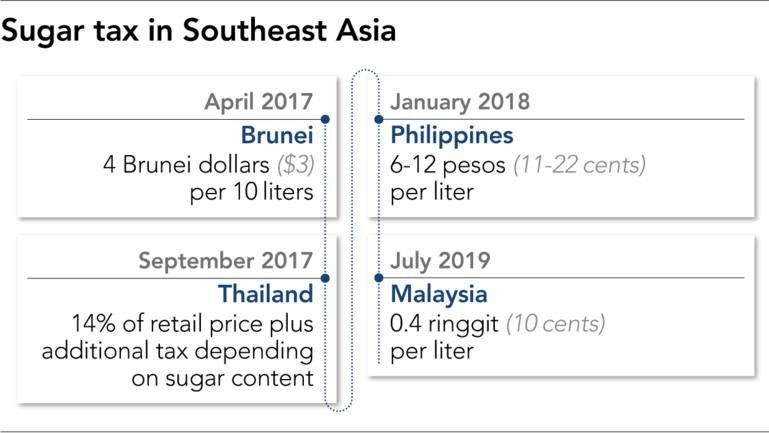 Like Mahathir, Philippine President Rodrigo Duterte was looking to fight obesity but also top up the government coffers. For the January-October period of 2018, the taxed beverages generated $570 million in revenue.

But while sugar taxes may improve both public and fiscal health, there are potentially painful side effects, especially in sugar-producing countries.

The world's top sugar-cane producer as of 2017 was Brazil, at 758 million tons. India was second, at 306 million tons, followed by China (104 million tons) and Thailand (102 million tons). The Philippines, Indonesia, Vietnam and Myanmar are all major producers as well.

Thailand's sugar tax had an immediate impact on the country's food and beverage industry, as companies scrambled to adjust their recipes to avoid the levy and keep their prices competitive. 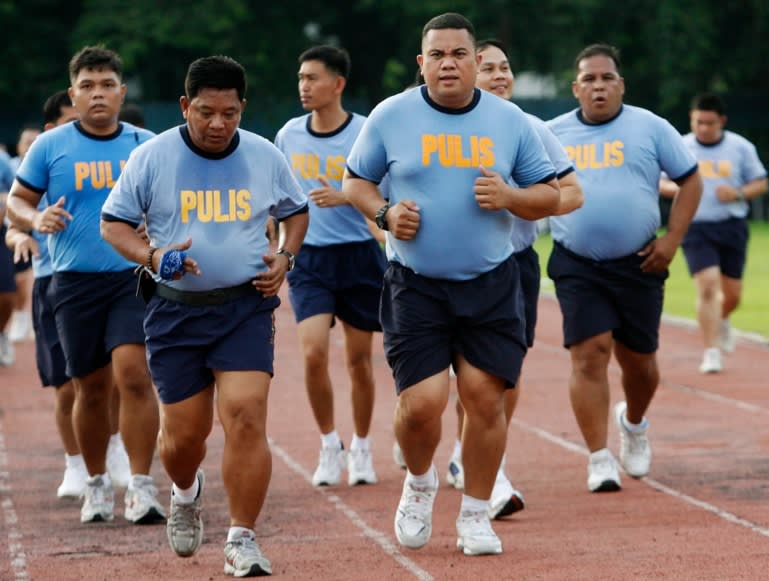 Naturally, the tax also dampened sugar demand in the domestic market. According to Thailand's Office of Cane and Sugar Board, which oversees the sugar industry, beverage makers used 440,000 tons in 2017, down from 540,000 tons the previous year. Sugar used in snacks dropped to 29,000 tons from 36,000 tons.

Facing its own sugar glut, the Indian government has sought to encourage exports in the 2018-2019 season, offering export subsidy with a goal of shipping 5 million tons. A strengthening rupee and falling global sugar prices are working against the plan, however, and exports are projected to reach only 2.5 million to 3.5 million tons this season.

Increased stockpiles could force Prime Minister Narendra Modi's government to provide more support to farmers and the ailing industry ahead of the general election to be held by May. Global sugar prices have yet to recover from a decline that began in late 2016. The international benchmark futures were trading at around 12 cents per pound in New York in early March, about half the recent peak of over 23 cents in October 2016. There are several reasons for this, including favorable weather and industry deregulation in certain countries -- both of which fueled oversupply concerns. Crude oil prices are also factored in, since sugar is an important raw material for the alternative fuel ethanol.

The tax pressure has not helped. "The prospect of rising tax and intensified competition among major producing countries have probably been reflected in falling raw sugar prices over the past three years," said Margaret Yang, Singapore-based analyst at CMC Markets. 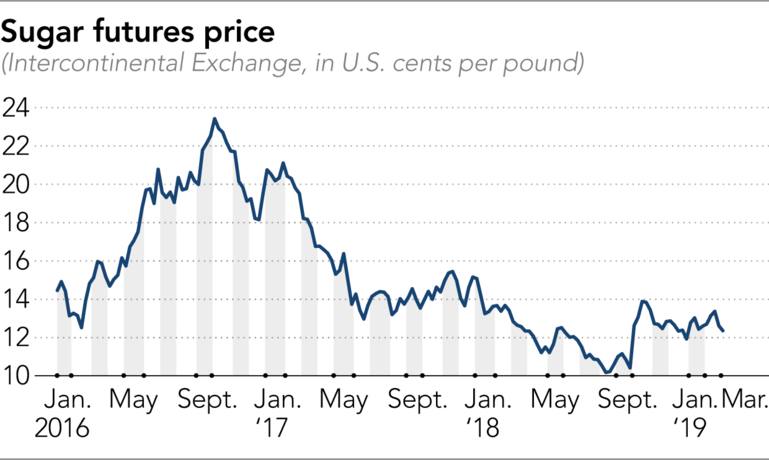 Businesses are taking the threat of reduced consumption seriously. Singaporean agricultural commodity trader Olam International in January announced it would divest its sugar business, which it considers unsustainable.

"I think with the tax, there will be some reduction in consumption that varies from country to country, but there will be a definite reduction," Olam founder and CEO Sunny Verghese told the Nikkei Asian Review. "Our own estimation is that an .. 8% to 10% reduction is possible depending on the level of tax."

Looking ahead, some farmers are likely to switch from sugar to other products, or strive to sell sugar for uses besides food. Teerachai Saenkaew, a member of a sugar farmers group in northeastern Thailand, suggested that a higher-value-added strategy could fetch higher prices for sugar cane.

"Brazilian sugar refineries are all capable of producing both refined sugar and ethanol," Halley said, adding that they have "the ability to switch between both as the market dictates."

Halley argued Asian governments may need to make policy adjustments to compensate for the decline in sugar consumption.

"Currently India has a 2020 target of adding 20% ethanol to refined petroleum, which it is hopelessly far from achieving," Halley said. "India and Thailand both allow ethanol to only be refined from molasses, not sugar cane. If India and Thailand could change these laws and assist sugar refineries in transitioning to dual production, India could for example almost meet the target."

Back in Singapore, consumers like the sweet-toothed Sohoni are bracing for the government's next move in its war on diabetes. A vending machine in Sohoni's office sells 320 ml cans of Coke for 1.2 Singapore dollars (88 cents), and he admitted he would probably reduce his five-cans-a-day intake if the price rises to SG$2.

Still, he vowed, "I would never stop drinking Coke."

Nikkei staff writers Apornrath Phoonphongphiphat in Bangkok and Cliff Venzon in Manila contributed to this story.