HONG KONG -- In late 2003, when much of the world was getting connected to Wi-Fi, China decided to do it differently.

Beijing adopted its own standard, called WAPI, claiming it was more secure than Wi-Fi and insisting device makers would have to conform if they wanted to sell their products in China.

This sparked a trade dispute with the U.S., which ended with China shelving the project in 2004. But China never gave up its larger ambition to have a greater say in the inner workings of technologies. Now, Beijing has key roles in shaping standards in fields ranging from telecommunications to lithium.

That the world's No. 2 economy would want such influence is no surprise. But some critics question the way Beijing pursues it. Nearly two decades after the Wi-Fi spat, as the West and China trade barbs and jostle for geopolitical dominance, a new battle over standards is heating up.

Whether it is something as complex as a computer or as simple as a screw, standards help to ensure products are reliable, safe and work across borders. Many are set by global bodies such as the International Organization for Standardization (ISO) and the International Electrotechnical Commission (IEC), after discussions by "technical committees" comprising experts from around the world.

China's presence on these panels has increased significantly. From 2011 to 2021, its secretariat positions in ISO technical committees and subcommittees -- influential roles in the development of specific standards -- rose by 58%, while its comparable IEC positions doubled from 2012 to 2021. Over the same period, secretariat spots occupied by the U.S., Germany and Japan in both organizations remained relatively flat, according to the U.S.-China Business Council (USCBC).

While China remains behind the more established players, some critical observers stress it is focusing its efforts on strategic sectors. No company, for example, had more technical contributions approved for 5G than China's Huawei Technologies, according to a November 2021 report by market intelligence company IPlytics.

New technologies yet to be standardized -- drones, lithium batteries, data security, artificial intelligence and so on -- are also key targets.

"The stakes are particularly high right now because with the digital revolution, a new generation of technical standards is being formed," said Emily de La Bruyere, a senior fellow at the Foundation for Defense of Democracies (FDD), a U.S. think tank. "Should Beijing succeed in setting standards in strategic areas, it would lock in not only market advantage but also political, normative and technological influence." China's top-down style is stirring unease. While it is not unusual for countries or companies to try to mold international standards to their benefit, the process has required a certain spirit of cooperation -- engineers sitting around a table, weighing proposals from different suppliers and striving for a consensus on the best solutions to common problems.

But Scott Kennedy, a senior adviser and trustee chair in Chinese business and economics at the Center for Strategic and International Studies, argued, "Everything the Chinese do involves a great deal of state involvement, so that is quite worrying to the traditional participants of standards because they all bring this tradition of market-based, voluntary, consensual standards, and China doesn't operate that way."

Some see standardization in the context of the Chinese Communist Party's bigger goals.

"[China's] drive to control the agenda within the United Nations and standards developing organizations is one aspect of a comprehensive push to strengthen the country's global rule-making power and to shield it from unwelcome constraints or intrusions," the U.S.-based Asia Society Policy Institute (ASPI) said in a recent report.

Authors Daniel Russel and Blake Berger acknowledge that it is "entirely appropriate" for China to play a prominent role in standardization and that it is "neither desirable nor possible" to exclude it. Instead, they say Western players need to focus on raising their own game and "aligning the efforts of like-minded countries."

As awareness of the challenge from China grows, Western policymakers are also increasingly looking at standardization through a competitive lens.

The European Union's industry chief, Thierry Breton, cautioned in mid-2020 that EU governments needed to be more active in hammering out global standards for the production and use of lithium -- a crucial material in electric cars. "We need to be vigilant about such processes which can, without the right engagement, unintentionally harm our economic competitiveness and technological leadership," he said, as reported by Reuters.

Days later, the ISO voted to accept China's proposal to establish a lithium committee that will oversee standards throughout the supply chain. China holds the secretariat. 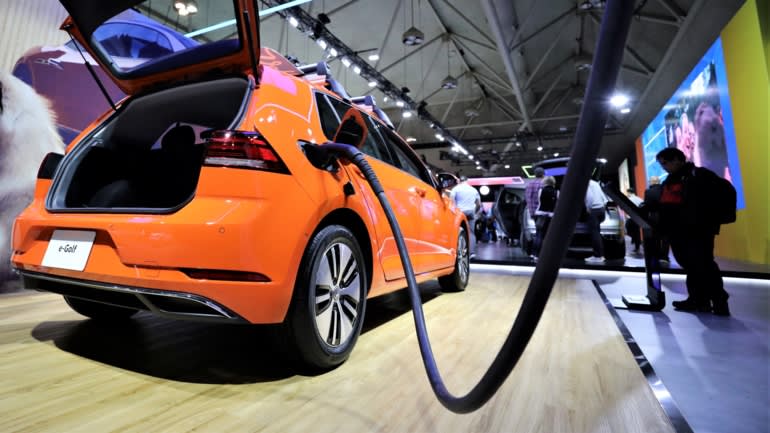 A Volkswagen electric car: China's focus on setting standards on lithium -- the core material for EV batteries -- has stirred unease in Europe.   © Reuters

In October of this year, China released a long-awaited outline of its standardization strategy through 2035.

In some ways, the blueprint says what the international community might want to hear. It vows to shift from a government-led approach to more of a government-market system, with a significant increase in market participation. It also states an intention to align 85% of domestic standards with international ones. And it promises to ensure that foreign-invested enterprises are able to participate in Chinese standards-setting "in accordance with the law."

Yet experts suggest each of these points could come with a catch.

"This growing role for industry players must be placed in the context of a Chinese party-state that is asserting greater control over Chinese companies, particularly technology companies," Matt Sheehan, Marjory Blumenthal and Michael Nelson argue in a response to the 2035 strategy, published by the Carnegie Endowment for International Peace. "In that context, this greater role for industry actors should be seen not as a shift away from the state, but rather as a way of bolstering the capabilities of the state-centered standards system."

As for the 85% synchronization, they note that this would have been welcomed in the past. "But today, other countries will likely view this type of alignment with suspicion, portending efforts by China to force its own standards on the rest of the world."

Foreign companies, meanwhile, continue to report obstacles within China despite a 2019 Foreign Investment Law that affirmed their right to participate.

Joerg Wuttke, president of the European Union Chamber of Commerce in China, said technical standards such as the Chinese train control system are only made available to a select group of foreign enterprises and updates remain completely confidential. He said the same goes for the energy sector.

"Standards developed by state-owned enterprises like State Grid will be used for bidding processes," Wuttke said. "However, foreign players sometimes don't even have access to the text of these standards, which effectively prevents them from participating in bids." When it comes to China's participation in global organizations, few doubt who calls the shots.

Beijing has some regional governments provide annual stipends of $155,000 to companies leading the development of standards at the ISO and other bodies, but these companies' voting decisions are under strict state control, according to according to Tim Ruehlig, a research fellow at the German Council on Foreign Relations and a research associate at the Europe program of the Swedish Institute of International Affairs (UI).

"We have reports that ... China wants to have screenshots or pictures of the voting behaviors," Ruehlig said. This way, authorities can ensure "all Chinese participants have voted in line with the general agreement that the state institutions have given out before the voting procedure. So that is, of course, a massive example of how China is controlling its participants in those technical committees and subcommittees."

At the same time, not all standards are established through channels like the ISO. Some are de facto standards, exported through investment and development assistance. By the end of July, China had signed 98 bilateral and multilateral agreements on standardization with 55 countries and international organizations. The majority are with BRI participants and Europe, official data shows.

The ASPI noted that Chinese standards are likely to have the advantage in emerging economies where Chinese companies have moved in, frequently with state support. BRI railways and telecom infrastructure built with equipment from Huawei and ZTE are establishing standards as they go up.

"De facto standards have a certain stickiness to them because of the cost of transitioning to a system that utilizes different, sometimes incompatible standards," the ASPI report says. "Thus, embedded in the export of digital networks and systems are implicit decisions about technology standards that tend to lock in Chinese vendors, whether the customers know it or not."

For the U.S., Washington's own attempts to keep Chinese companies away from sensitive technology may be undermining its influence over standards.

The inclusion of Huawei and other Chinese enterprises on the U.S. Entity List -- basically a national security blacklist -- has made some American companies wary of working with them on standards, according to Jack Kamensky, director of business advisory services at the USCBC. He said a major worry is the applicability of U.S. export controls to standard-setting activities, prompting some U.S. companies to essentially sideline themselves. How can Western policymakers respond to China's standards drive?

The ASPI offers prescriptions such as greater coordination between governments and industry, zeroing in on priority technologies, using platforms like the Group of 20 to promote international standards, and more diplomacy with China.

The authors of the Carnegie report advise against "heavy-handed interventions," like trying to exclude Chinese researchers or companies. Instead, they urge concerned policymakers to engage with leaders and participants in standards bodies to "understand exactly where distortionary practices are happening" and how to combat them -- say, tightening voting procedures or supporting domestic companies that devote resources to standards.

Kamensky -- who shares the view that China's desire for influence is nothing unusual -- contended that if Beijing resorts to homegrown alternatives like WAPI in fear of being ostracized, this would be a far worse outcome. "When Chinese and international standards don't align, it can incur engineering costs or can slow the time to market for new products," he said. "It can even act as a market access barrier for U.S. products to get into the Chinese market."

One way or another, decisions made today could have sweeping consequences tomorrow.

The next generation of standards, the FDD's de La Bruyere said, "will be the rule set for the next industrial revolution and they will play a major role in determining the commercial hierarchy, technological architecture and norms of the digital era."

Correction: This story has been amended to properly attribute comments to Tim Ruehlig, rather than Bjorn Fagersten, who was speaking at the same press conference.