BANGKOK -- Asia has been battered in 2018 by a series of extreme weather events such as floods and typhoons, and the prospects for coming decades are bleak with rising temperatures set to spur even more severe cases of inundation.

While many governments are taking steps to reduce climate change-inducing emissions, the compromises agreed upon at the recent COP24 climate summit in Poland are unlikely to stem the heating.

This places the onus on companies operating in the region to protect themselves against environmental threats. And there are numerous examples of the consequences of inaction.

Among the most graphic, the 2011 floods in Thailand were the worst in the Southeast Asian country in five decades, affecting global food supplies and knocking out manufacturing chains for everything from car components to semiconductors. The World Bank estimated it caused losses of $46 billion, and insurance payouts ranked among the top 10 of all time globally.

While Toyota Motor -- with 8% of its global production in Thailand -- saw production affected at three plants there and one in Japan, a rival was hit even harder. Honda Motor was forced to ditch its earnings forecast for the year, suspend its Thai operations -- accounting for 4.6% of its global output -- for months, scrap over 1,000 swamped vehicles that had not been moved in time, and also halt production at a plant in Malaysia.

"Cars at the facility appear to be floating," Tomohiro Okada, spokesman for the Japanese automaker said as he surveyed the company's submerged plant in Ayutthaya, near Bangkok.

Nowhere in the world is more vulnerable than Asia from the inundation threat stemming from climate change.

"It is predicted that South Asia and Southeast Asia are the global areas that are going to be the most impacted by global sea level rise -- by flooding and inundation impacts," Lisa Guppy, the Asia and the Pacific Coordinator officer for disaster, conflict, and humanitarian affairs with the UN Environment Program, told the Nikkei Asian Review.

"Certainly not enough is being done by businesses," said Guppy, noting that many companies not only fail to protect their assets, but aggravate problems through careless emissions or overextraction of groundwater and other resources. An aerial view of a flooded Honda car factory in Ayutthaya province on Oct. 10, 2011. Nearly 200 factories closed in the central Thai province of Ayutthaya because of the inundation   © Reuters

After the 2011 disaster, Honda called in international consultants PwC for advice, and to draft a business continuity plan that included climate change. That was unusual. According to a survey this year by the Tokyo Chamber of Commerce and Industry, only 27% of more than 1,000 Japanese companies surveyed have formulated business continuity plans to implement in the wake of natural disasters. Almost 80% had no measures mapped out for flooding.

Among companies that have taken steps, Yokohama Rubber has diversified its suppliers and storage geographically to reduce its exposure. Before the 2011 quake and tsunami in northeastern Japan, the tire maker bought from multiple vendors to drive down costs. It now also views this as a way to hedge against natural disasters. Sony also chooses suppliers in a variety of locations and has taken other measures, including purchasing insurance and putting disaster mitigation plans in place.

While a few large companies in Asia have contingency plans, many others seem to be waiting for governments to take action. Some 90% of businesses in Vietnam's Mekong Delta, which is particularly at risk from flooding, had made no preparations to mitigate the effects of climate change, according to a 2015 survey by the Vietnam Chamber of Commerce and Industry. Although many reported losses from changing weather patterns, they were looking to the government to take the lead.

The operators of three industrial parks in southern Vietnam contacted by the Nikkei Asian Review all confirmed they are not preparing proactively for the effects of climate change, but leaving it up to the authorities. A 2017 survey by Vietnam Market Research and Analysis for Industries, Countries, and Consumers, showed that half the enterprises that responded paid no attention to climate change. 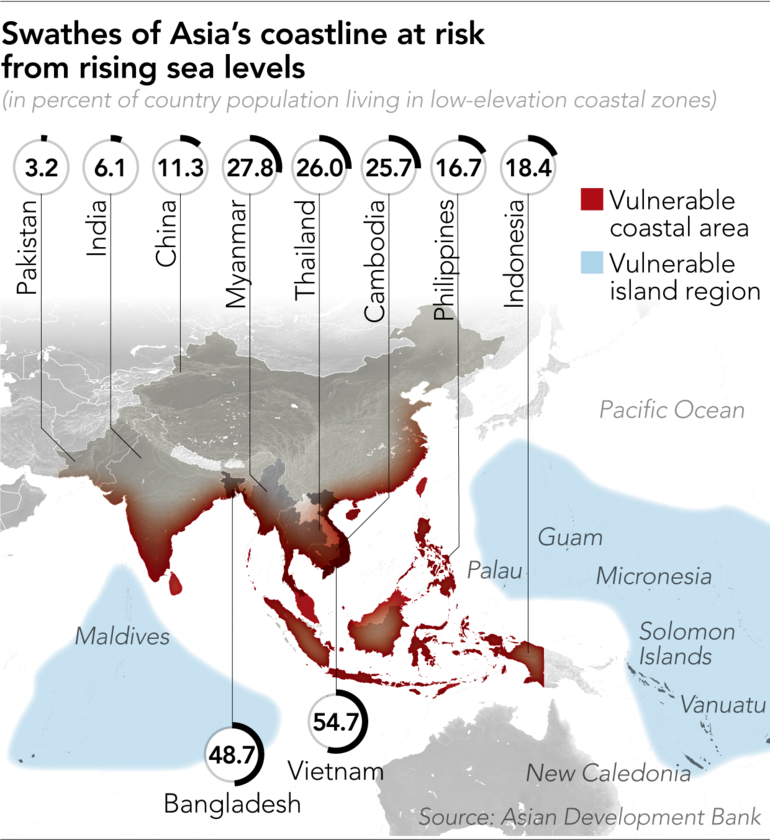 The impact of the Thai floods was keenly felt by reinsurance companies, which insure insurers for extreme events. "Reinsurance companies did not expect to have such a significant loss from this particular market," an insurance analyst told Nikkei. "This happened due to the impact of the floods on industrial estates outside of Bangkok, which of course were heavily insured in the commercial markets."

"After the floods, Thai insurers found it almost impossible to get reinsurance cover for flood damage," said Tim Hollinrake, a loss adjuster with McLarens in Thailand at the time. "Rather than exclude floods because they didn't want to be seen to exclude such a major peril, insurers offered really derisory limits, like 100,000 baht ($3,000) for flood damage for a massive factory."

Severe inundation seems to be on the increase across Asia. In August, the southern Indian state of Kerala experienced its worst flooding in a century, leaving more than 1,200 people dead and 1.3 million displaced. An even worse monsoon-related disaster in June 2013 took the lives of almost 6,000 people in the state of Uttarakhand in northern India. According to one U.N. report, between 1998 and 2017 natural disasters have cost India $80 billion.

In Kerala, the impact on company operations was temporary, but the flooding also affected consumption, which in turn hurt bottom lines. Sales of Maruti Suzuki India's cars fell 3.4% in August and other automakers such as Hyundai Motor also took hits. Kerala accounts for around 85% of India's rubber production, and companies such as Apollo Tyres, CEAT, MRF, and JK Tyres had to halt production temporarily. Insurance claims soared to an estimated 25 billion rupees ($350 million).

The weather has been particularly foul in Asia this year. The month before the Kerala disaster, Japan experienced its most devastating flooding since 1982, with torrential rains triggering floods and landslides in central and western parts of the country. Over 230 people died and nearly 3 million were evacuated. Companies including Mazda Motor, Toyota, Mitsubishi Heavy Industries, and Panasonic were all forced to shut down production lines. 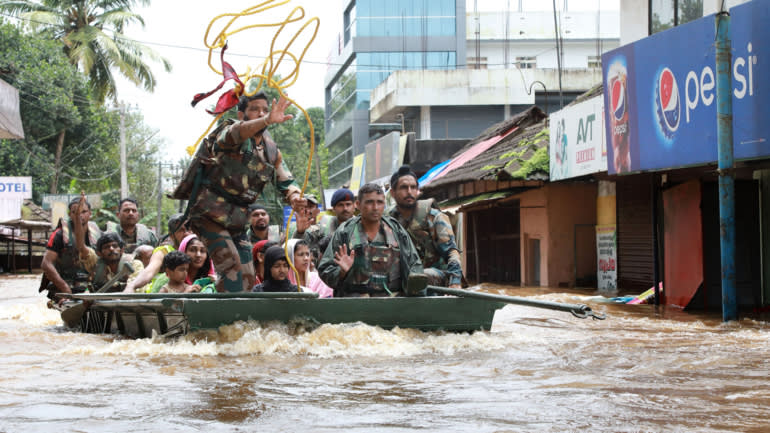 Indian army personnel evacuate people in a residential area at Aluva in the Ernakulam district of the Indian state of Kerala, on Aug. 17. (AFP)

Unusually heavy rain caused poorly constructed dams in central Myanmar and southern Laos to collapse in the middle of the year.

In mid-September, the northern Philippines was lashed by Mangkhut, a category 5 super typhoon that killed around 130 people and caused over $600 million in damage. The typhoon went on to deliver Hong Kong its most severe storm since 1983. But even that was a fraction of the $2.2 billion in damage caused by super Typhoon Haiyan, one of the most severe storms ever recorded, which killed over 6,300 people in the Philippines alone in late 2013.

Flooding has become so commonplace in Manila that the Philippine government is looking for investors to fund an entirely new city 80 km north of the capital. Clark Green City is surrounded by mountains, helping to shield it from typhoons. And its elevation makes it less prone to flooding.

In response to these increasingly frequent severe storms, governments, financial institutions and companies are turning to technology. Risk Management Solutions, a Silicon Valley software maker, has developed disaster modeling to help them gain a better understanding of their risk exposure. New Mexico-based Descartes Labs has created a "data refinery" that processes images from NASA and European Space Agency satellites to produce a "digital data twin of the entire planet."

"There is a belief natural disaster events will get worse, and there seems to be a lot of discussions about how to deal with these in insurance terms," Hollinrake told Nikkei. An insurance industry analyst told Nikkei that "countries like the Philippines and Indonesia, with massive catastrophe exposures but very little protection, are looking at innovative ways of increasing their insurance coverage."

One avenue being explored is microinsurance. Another way is to issue catastrophe bonds that provide governments with postdisaster funding.

"In China, the government seems to like its role of reinsurer-of-last-resort, where it gets to step in and save the day when catastrophe strikes," the analyst told Nikkei. "However, the losses are going up and up so I think the Chinese government is now doing more to encourage the growth of the private insurance and reinsurance market and reduce this burden."

The Asian Development Bank issued a reminder in a 2017 report that six of the world's 10 countries most affected by extreme weather are in its backyard: Bangladesh, Myanmar, Pakistan, the Philippines, Thailand, and Vietnam. The ADB estimated that nearly 49% of Bangladesh's population and 55% of Vietnam's -- some 135 million people -- are vulnerable to rising sea levels due to climate change.

A study by the Stanford School of Earth Sciences reported in 2014 by the journal Nature Climate Change confirmed anecdotal observations by Indian farmers that the monsoon season has changed in character. There were heavier downpours coming earlier in the year, and longer dry spells. 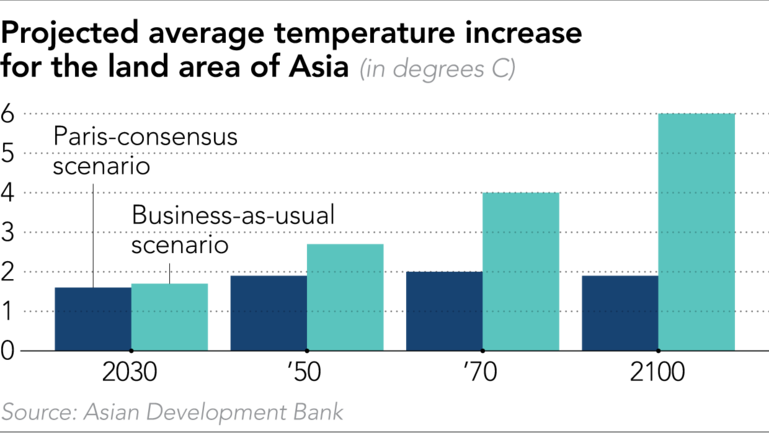 "There are many predictions that global warming should cause heavier downpours and more frequent dry spells," said Noah Diffenbaugh, one of the Stanford researchers.

"For the 21st century, the benefits of protecting against increased coastal flooding and land loss due to submergence and erosion at the global scale are larger than the social and economic costs of inaction," the IPCC said in a 2014 report on coastal impacts and inundation.

The UNEP's Guppy noted that one of the threats from inundation is more prosaic but grim enough: "Almost every storm surge or sudden impact water event in this region will overload sewage, but we don't really know what people do about that. Basically, it just happens."