Overseas companies put off by red tape, poor infrastructure and plight of Rohingya

YANGON -- Aung San Suu Kyi's landslide Myanmar election win this month triggered a frenzy of excitement among her supporters, but it was met with cool shrugs by many foreign governments and investors seeking economic and political reform.

On the polling day of Nov. 8, voters lined up from early morning to cast their ballots support for Suu Kyi's National League for Democracy. And for three nights, dozens of people stood outside the NLD's headquarters in Yangon chanting her name as incoming results pointed to a huge victory for the party.

But Suu Kyi, the country's de facto head of government, did not revel in surpassing the number of seats the NLD won five years earlier. In a televised speech on Nov. 16, she didn't even mention her party's triumph.

"Now, I must once again remind everyone about their health," Suu Kyi said, softly urging the public to take measures to prevent the spread of the coronavirus.

It's Central Executive Committee released a statement on Nov. 17, stating that the NLD has won continuous backing from 1990 to 2020 "because of Aung San Suu Kyi's outstanding skill to win the people's support." 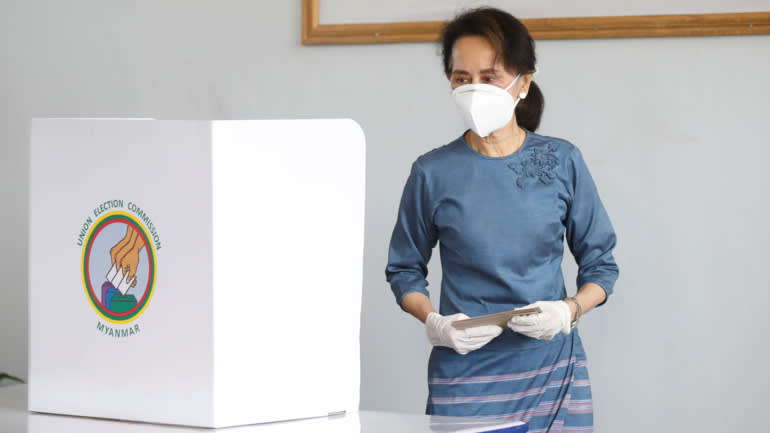 The NLD won a combined 396 seats in both chambers of parliament, up from 390 in the previous general election and more than 80% of contested seats. Under Myanmar's constitution, differences between the upper and lower houses are resolved by a joint session, meaning combined strength is a measure of political influence.

In contrast, the military-affiliated Union Solidarity and Development Party, the largest opposition force, ended up with 33 seats, eight less than in 2015. Although ethnic minority parties were expected to gain seats, they only garnered 47 in total. Suu Kyi will form her second-term government in March. She has said she hopes to make progress on constitutional reform and peace negotiations with ethnic armed groups -- a process that has been in limbo because Myanmar's powerful military still holds a de facto veto on such issues.

While Suu Kyi is left with few options in those areas, the economy is one weapon she has to push forward the country's fledgling democracy. With newfound political capital from the election win, the NLD now has the opportunity to swiftly implement economic reforms and potentially win even greater support.

But there was little discussion of the economy during the two-month election campaign, despite domestic and foreign investors alike being disappointed with Suu Kyi's performance in her first term.

Vicky Bowman, Britain's ambassador to Myanmar from 2002 to 2006 and now director of the Myanmar Centre for Responsible Business, shares that assessment.

Bowman told Nikkei Asia that the NLD government "was slow to get started" on the economy. "The government didn't come out quickly with the plan and wasted a lot of time."

Indeed, the Myanmar Sustainable Development Plan, which lays out reforms for ministries and agencies to implement, was released only in August 2018 -- about halfway through her initial mandate.

Bowman said the NLD-dominated parliament was an even "bigger disappointment" as legislation needed to create modern institutions that balance economic development with environmental and human rights were handled incoherently.

"A lot of these laws were actually not consistent with the NLD's political commitment, and there was insufficient time and effort to address why it is not consistent," she said.

In 2016, shortly after Suu Kyi took power, the World Bank predicted that Myanmar's real gross domestic product would expand at an average of 8.2% per year. It was a time of high expectations not just for the economy but also for democratization. But average GDP growth so far under her leadership has failed to reach 7%. While the investment environment seems to have improved with the implementation of the new Company Law in 2018 and the Investment Law in 2017, the road to those was largely paved by the previous government controlled by the military-affiliated USDP.

"Even though we saw these reforms continue, we did not see significant add-on under the NLD government," said Min Zaw Oo, executive director of the Myanmar Institute for Peace and Security, a non-governmental organization.

Private entrepreneurs, who carefully avoid overt criticism of the government, are frustrated by the NLD's inability to implement efficient policies. Many businesses feel bureaucratic red-tape has hindered opportunity.

"The vision and policies were set by the leaders, but the execution was a challenge," said Pyi Wa Tun, CEO of Parami Energy Group. "The government officials still want to micro-manage the private sector and it makes it difficult for us to move things around."

Chris Markey, a senior associate at a Singapore-based consultancy Vriens & Partners, is hopeful there will be an improvement.

"Significant strides could be made by boosting coordination between often siloed ministries, a promising development that has emerged in response to the pandemic," Markey told Nikkei Asia.

The amount of foreign investment approved by the Myanmar Investment Commission averaged $5.3 billion a year during Suu Kyi's first 4 1/2 years, less than the $5.5 billion approved during the previous military-affiliated government. Although Myanmar's democratization was expected to increase investment from Europe and the U.S., large amounts have come mainly from Asian countries such as China, Japan, and South Korea.

While the government wants to promote investment from foreign manufacturing companies to create jobs, one of the major obstacles is the lack of infrastructure for industrial activities. Frequent blackouts hinder stable production at factories, while lack of roads and railways makes it difficult for companies to establish reliable supply chains. In 2015, the Thilawa Special Economic Zone opened with the help of the Japanese public and private sectors. (Photo by Ken Kobayashi)

A rare success can be found in Thilawa, near Yangon. In 2015, the Thilawa Special Economic Zone opened with the help of the Japanese public and private sectors. It covers an area of about 630 hectares and is home to 112 companies, half of which are Japanese. Currently, the Thilawa SEZ is the only industrial park in Myanmar with modern infrastructure.

The Japanese government pays keen attention to the political situation in Myanmar, perhaps due to the large exposure of Japanese companies there.

Prime Minister Yoshihide Suga on Nov. 10 congratulated Suu Kyi on the victory even as votes were still being counted. "Japan will cooperate with the next administration in Myanmar and continue to fully support the country's democratic nation-building," Suga said in a message sent before most other countries.

Other SEZs offering tax benefits include Dawei in the south, close to the Thai border, and Kyaukphyu, a Chinese-led project in the west, but construction has not started on either. The NLD government only began to push for the development of solar power plants and industrial parks near Yangon by foreign companies this year.

The persecution of the Rohingya Muslim minority group has also led to a deteriorating view of Myanmar among foreign governments and media.

The treatment of the Rohingya resulted in 700,000 refugees fleeing the country in 2017. Myanmar, previously seen globally as moving toward democracy under Suu Kyi, is now portrayed as an oppressor. The human rights issue has become an obstacle to drawing investment from Western companies, which fear a backlash from clients and shareholders. Peter Crowhurst, chief executive officer of the British Chamber of Commerce in Myanmar, said the NLD had "five years of rehearsal, and the government has been given another resounding mandate. Now is the time to put what they learned into action."

But he stressed the Rohingya crisis needs to be "sorted out quickly in a transparent manner." 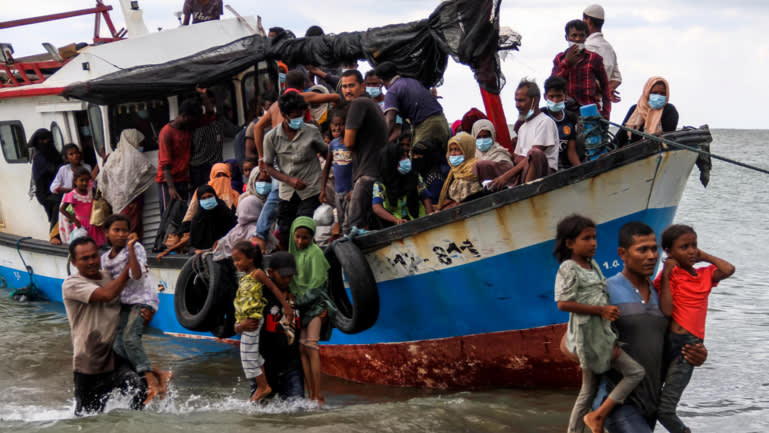 Locals evacuate Rohingya refugees from a boat on a coast of North Aceh, Indonesia, in June.   © Reuters

Linda Liu, a Singapore-based economist at Maybank Kim Eng, told Nikkei that the "largely smooth conclusions" of the elections should help to reduce near-term domestic uncertainties and bolster foreign investors' confidence in the country.

"We do think we could see a revival of Western investors' interest in Myanmar, with the renewed economic reforms," Liu said. She pointed out that Suu Kyi's government is drafting economic recovery and reform plans, which are expected to include initiatives and measures to attract increased levels of FDI into the country.

The first crucial step over the next three months will be the formation of a new cabinet.

Diplomatic sources say the NLD tends to evaluate its members by how much they have contributed to the pro-democracy movement since 1988 and how long they were imprisoned under the military junta.

In 2016, Suu Kyi's government got off to a bad start in forming its cabinet as myriad policy issues were left unaddressed. Making matters worse, some ministers seemed unfit for their jobs. NLD supporters celebrate at party headquarters after the general election in Yangon on Nov. 9.   © Reuters

One of her close associates was initially appointed as planning and finance minister, but he resigned due to delays in financial sector reforms as well as corruption allegations. His successor, Soe Win, who is from the private sector, succeeded in opening up banking and insurance to foreign investment. But aged over 80 years, he is no leader for the next generation.

There is speculation that other key economic ministers -- such as electricity and energy -- will be replaced in March when the new parliament convenes. The speed of economic reform will depend on how well officials can implement and execute necessary policies.

The election victory gives Suu Kyi another shot at solutions that require a lot of political capital: economic reforms, the Rohingya issue, peace talks with other ethnic minorities and constitutional reform. In short, the next government will determine the country's course over the next few decades.

Myanmar's biggest economic risk, however, is that no one can answer the question of who will lead the country after Suu Kyi, who turned 75 this year, leaves the political arena.

In an interview with a local newspaper a few days before the election, NLD spokesperson Monywa Aung Shin said Suu Kyi might step down to an advisory role during her second term. Some, however, worry that political turmoil is a near certainty without the force of such a charismatic leader.

Kei Nemoto, a professor who specializes in the modern history of Myanmar at Sophia University in Tokyo, has such fears.

"If Suu Kyi leaves the NLD, the party will start to fall apart," Nemoto predicts.