The risk of a miscalculation triggering a confrontation is real

TAIPEI -- The U.S.-China relationship is at its lowest point since then President Bill Clinton sent aircraft carrier groups to stop Chinese intimidation of Taiwan in 1996.

Today, just as then, Taiwan is caught in the middle of rising tensions between Washington and Beijing.

In an early November meeting with U.S. National Security Adviser John Bolton, Chinese envoy Yang Jiechi warned that Taiwan was Beijing's "most important and sensitive" issue. As Yang undoubtedly knows, before joining the Trump administration, Bolton had called for steps including the restoration of full diplomatic recognition of Taipei if China continued its strong-arm tactics against the self-ruled democracy.

Taiwan is claimed by a Chinese government that has never ruled it and backed by a U.S. government that does not officially recognize it. The island occupies an awkward and uncertain position as Beijing and Washington step up belligerent rhetoric over trade, the South China Sea and human rights abuses in Xinjiang.

Yang told Bolton that China was adhering to a policy of "no confrontation" with the U.S. At a news conference two days later, Secretary of State Mike Pompeo lauded America's unofficial, yet close, relationship with Taiwan after a meeting with Yang and Chinese Defense Minister Wei Fenghe.

"Regarding our strong ties with a democratic Taiwan, I reiterated the U.S. policy has not changed and that we are concerned about China's increasing efforts to coerce others, constraining Taiwan's international space," Pompeo said. "The United States is not pursuing a Cold War or containment policy with China." 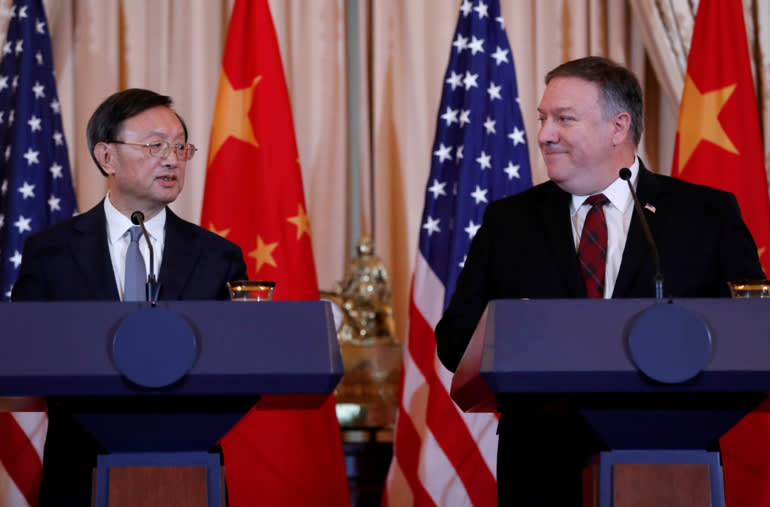 U.S. Secretary of State Mike Pompeo and Chinese envoy Yang Jiechi speak to reporters after a meeting in Washington in November.   © Reuters

Both sides are making such denials at a time when the tone of language on the U.S.-China relationship has shifted from cooperation to competition. While nobody is ringing alarm bells over the possibility of clashes between Beijing and Washington over Taiwan, a miscalculation by one or more of the three parties could hasten moves toward confrontation.

"I don't see an inevitable drift toward conflict," said Bonnie Glaser, director of the China Power Project at the Center for Strategic and International Studies. "It doesn't serve the interests of Taiwan, China or the U.S. to enter into such a conflict, so it will only happen if major policy errors are made by all sides."

Yet missteps are not inconceivable.

Chinese leaders erroneously took Trump's initial talk of a trade war as bluster, only to be caught flat-footed by his doubling down on tariffs. And the Trump administration either did not anticipate -- or did not care -- how poorly Vice President Mike Pence's recent criticism of a litany of Chinese transgressions would play in Beijing.

In an October speech at the Hudson Institute in Washington, Pence set out how the Trump administration sees China as actively hurting U.S. interests in areas from economics to security and political interference. He attacked Beijing for pushing Latin American nations to sever ties with Taipei, praised Taiwan's role as a bastion of democracy in Asia, and accused China of threatening U.S. companies that fail to call the island a "province of China" on their websites. 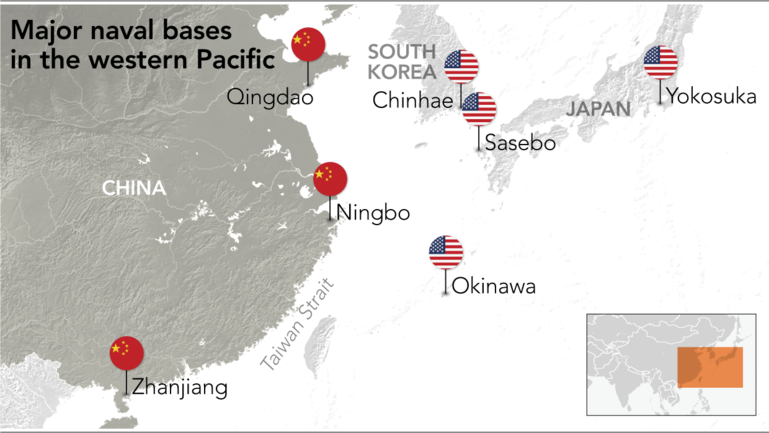 Whether or not this was Pence's intention, China appears to have determined that the U.S. now seeks to prevent its rise.

Beijing claims that Taiwan has been Chinese "since ancient times," but the greater significance of Taiwan for Chinese strategists is its position at the intersection of the Pacific Ocean, and the East and South China Seas.

A successful invasion and occupation of Taiwan would greatly boost China's ability to project power regionwide -- bringing it closer to U.S. bases in Okinawa and Guam, and creating choke points for shipping lanes that are vital to both Japan and South Korea. It would also likely boost domestic support for Chinese President Xi Jinping's increasingly authoritarian and nationalistic government.

Washington and Taipei perceive China as becoming increasingly belligerent in the region -- especially in the South China Sea -- and are deepening ties in an increasingly public manner.

Examples of this abound. Just days after being elected president in November 2016, Trump flouted four decades of diplomatic self-constraint by speaking directly with the president of Taiwan, Tsai Ing-wen.

In March, Trump ignored Chinese threats of reprisal and signed the Taiwan Travel Act, which encourages official exchanges between the U.S. and Taiwan up to the highest levels. In June, the U.S. dedicated a new $250 million compound with more than 400 staff to serve as the American Institute in Taiwan, its de facto embassy in Taipei. Three times this year, the U.S. has run freedom of navigation operations in the international waters of the Taiwan Strait. It also appears to be normalizing sales of military hardware to the island.

"I think the relations between Taiwan and the United States are better than before," Taiwanese Foreign Minister Joseph Wu said in a recent interview with the Nikkei Asian Review. "When they see that Taiwan is being responsible for its own defense, they are more willing to engage Taiwan than ever." A widening gulf in the Taiwan Strait

One of the biggest changes between Tsai's administration and that of her pro-China predecessor, Ma Ying-jeou, has been her emphasis on boosting military morale and spending while signaling Taiwan's resolve to defend itself in the event of Chinese military aggression.

Ma suggested in a speech this month, on the third anniversary of his meeting with Xi, that Taiwan adopt a policy of "three noes" -- not ruling out unification with China, not supporting Taiwanese independence, and not using force against Chinese aggression. Tsai lambasted her predecessor's proposal.

"It seriously hurts Taiwan's sovereignty and sends a wrong message to the international community that Taiwan will yield to China's suppression at a time when China has spared no effort to bully Taiwan," Tsai said. 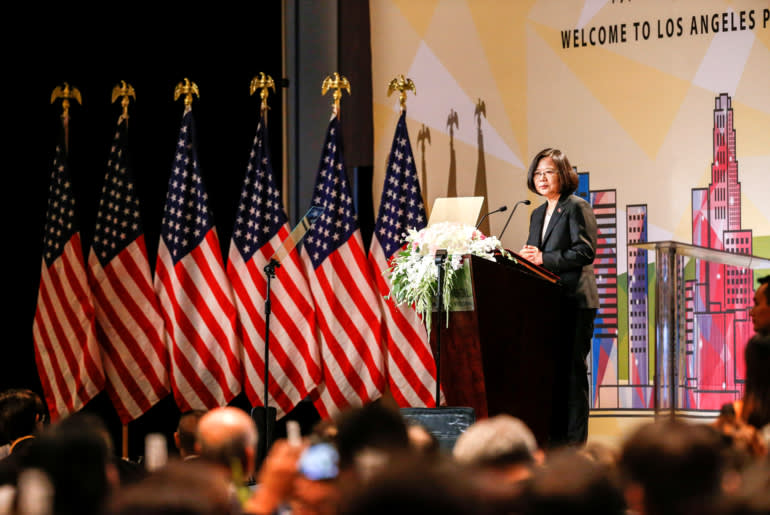 Taiwanese President Tsai Ing-wen speaks in Los Angeles during a visit to the U.S. in August.

At his first news conference in October, the new director of the American Institute in Taiwan, Brent Christensen, reiterated U.S. support for Taiwan.

"Any effort to determine the future of Taiwan by other than peaceful means represents a threat to the peace and security of the Western Pacific area and is of grave concern to the United States," Christensen said. "We are opposed to unilateral attempts to change the status quo."

China's Xi, on the other hand, has made annexing Taiwan a top priority.

As well as rapidly upgrading Beijing's military capabilities during his first five years in power, he has projected that power to the edge of Taiwan's territory. China's Liaoning aircraft carrier has circled the island and spy planes, bombers and fighter jets frequently test Taiwanese responses and gather information that could be useful in an attack. Disrupting Taiwan's democracy also appears to have become a priority for Xi. The island's justice ministry has been investigating alleged Chinese funding of opposition candidates in the upcoming local elections that will be held on Saturday, while Beijing's army of cybersoldiers appears to be planting and amplifying disinformation in Taiwanese social media.

"Xi's image of himself is as the Mao Zedong of the 21st century," said Willy Lam of the Chinese University of Hong Kong's Centre for Chinese Studies.

"Mao united the country but failed to get Taiwan," Lam said. "If Xi absorbs Taiwan, his place in the CCP pantheon will be elevated," he said using an acronym for the Chinese Communist Party.

Lam also sees a misreading of intentions by one of the three parties as the greatest risk to peace.

"Beijing assumes that no U.S. administration since Iraq would want to commit boots on the ground to protect an ally, but there is now bipartisan support in the U.S. to prevent the CCP from swallowing Taiwan," he said. "Even if Trump fails to get re-elected, the next president might still be adamant about selling arms to Taiwan -- and using military force to deter a full-scale invasion." The U.S. moved an aircraft carrier task force to the Taiwan Strait in 1996 to warn China against intimidating the island.   © Reuters

Lam sees activities such as U.S. weapon sales to Taipei and patrols of the Taiwan Strait by American frigates increasing between now and the next U.S. presidential election in November 2020. Indeed, Rupert Hammond-Chambers, the president of the U.S.-Taiwan Business Council, said last month he expects another round of arms sales before the end of the year.

"Taiwan is a key element of Trump's toolbox to ensure victory over China in the new Cold War," Lam said. "Both countries are now locked in a ferocious struggle for supremacy to be leader of the whole world."

China's impotence in the face of Clinton's show of support for Taiwan 22 years ago was the impetus for the modernization of the Chinese armed forces, especially its navy. Today, another crisis in the Taiwan Strait would likely be the greatest challenge the unofficial U.S.-Taiwan alliance has ever faced.