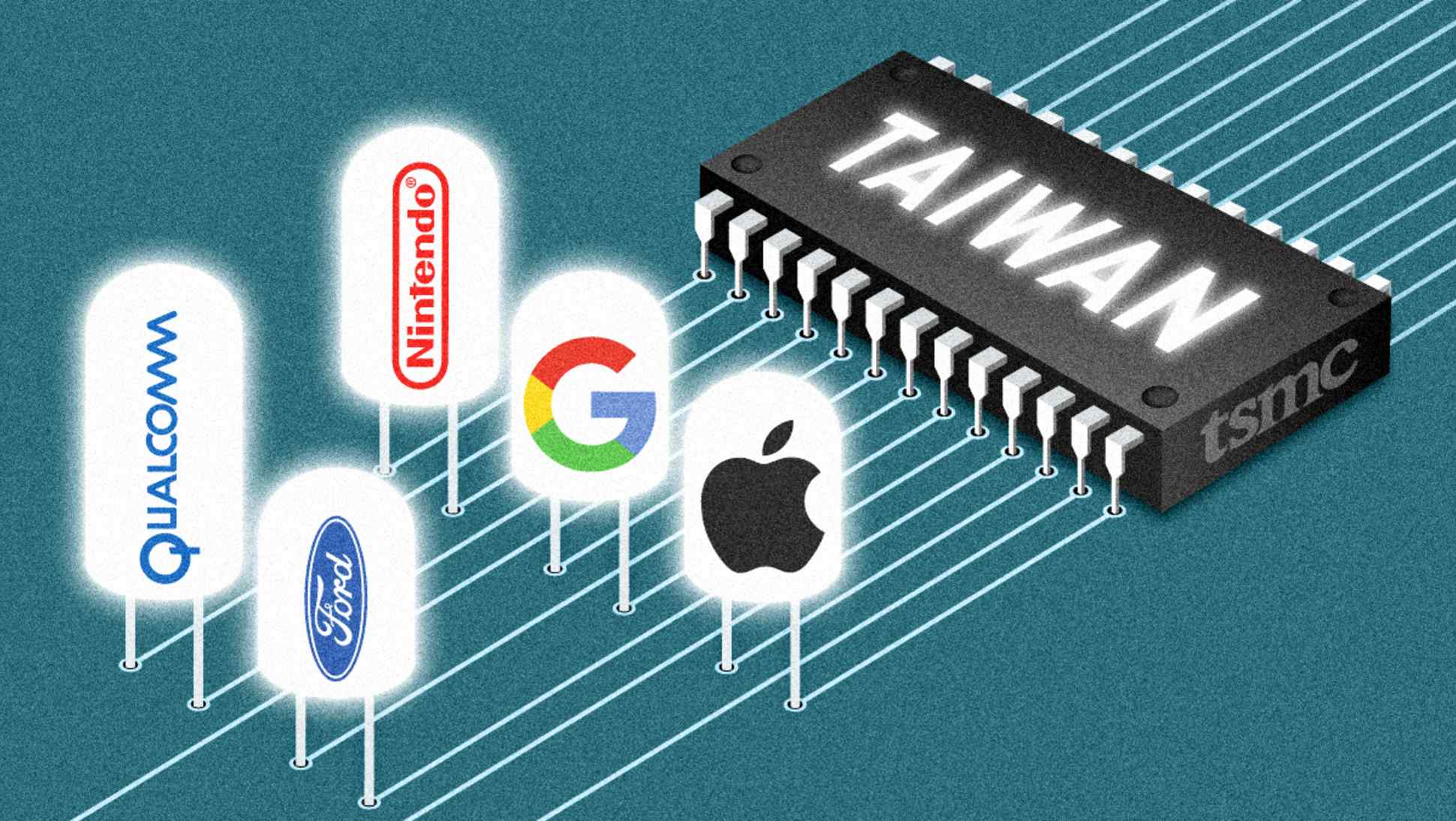 TSMC, which produces chips for tech giants such as Apple, Google and Qualcomm, accounts for one-third of total local stock market value and around 20% of estimated private sector investment. (Illustration by Michael Tsang)
Asia Insight

TAINAN, Taiwan -- Business has never been brisker for construction companies in Taiwan as the world's biggest contract chipmaker rushes to build facilities through the Lunar New Year holiday to meet surging demand.

Cranes, trucks, excavators and all manner of heavy vehicles stream in and out of the vast construction site for Taiwan Semiconductor Manufacturing Co.'s new factory in the southern Taiwanese city of Tainan. The site will be the world's most advanced 3-nanometer chip production plant -- and is due to begin mass production in the second half of 2022.

TSMC, which produces chips for tech giants such as Apple, Google and Qualcomm, has told builders it will pay lucrative premiums to ask many of their workers -- after only two days off -- to begin work a little earlier during the period surrounding the island's most important annual Lunar new year holiday starting this year on Wednesday, people with knowledge of the matter told Nikkei Asia.

And the construction spree will continue throughout 2021 as the titan undertakes its biggest facilities expansion. TSMC is also constructing a research and data center in the northern city of Hsinchu.

"We received a notice from TSMC that it is giving 4,000 New Taiwan dollars ($145) a day as an extra bonus for every worker willing to come during the Lunar New Year... that is literally at least double the average daily wage for front line workers," said one industry executive with direct knowledge of the expansion program.

"Even if that's only roughly a few extra days of building time [during the holiday], they don't want to fully stop at all," the person said. "That shows their commitment to speed up construction and development and confidence for future demand."

TSMC is also set to boost capacity for 5-nanometer chips -- currently used in the latest 5G iPhone 12 range and new Mac core processors -- by 70% from the end of last year to 120,000 wafers a month starting as soon as the end of 2021, multiple sources told Nikkei. That will help meet strong demand from high-end customers including Apple, MediaTek, Intel and Advanced Micro Devices.

The company told Nikkei Asia it will resume the construction work a few days earlier during the Lunar New Year in southern Taiwan and would pay extra premium to construction partners for working during the holidays. But TSMC declined to comment on its 5-nanometer production capacity expansion plan.

"Construction workers across Taiwan are all attracted to TSMC's sites as it is paying much higher wages than elsewhere... It's really the strong pillar of Taiwan's economy and the center of the tech ecosystem," said Bill Chiu, chairman of Gudeng Precision, which supplies equipment to TSMC.

As well as TSMC boosting capital expenditure by a huge $25 billion to $28 billion this year, the need for construction workers is also growing because other Taiwanese companies are bringing production home from China amid Beijing-U. S. trade tensions. 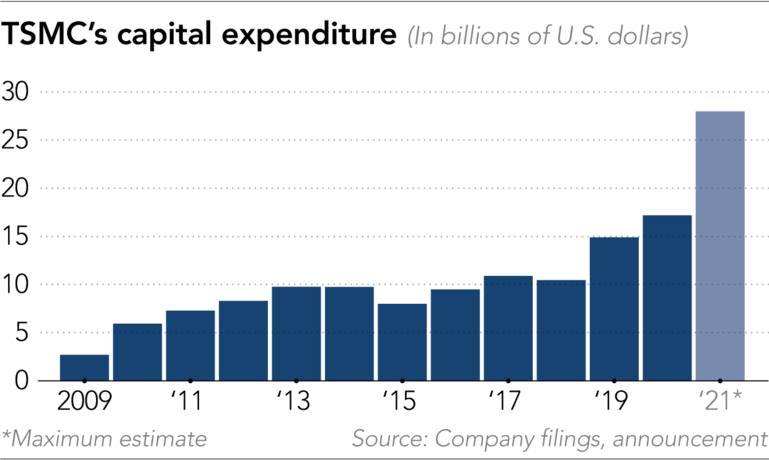 H.H. Liu, a construction supervisor at a contractor in the Taipei area, told Nikkei that the worker shortage has intensified since the final quarter of 2020 and worsened further ahead of the holiday.

"TSMC is a key reason... The company and its suppliers are attracting many workers from northern to southern Taiwan, while in the past year there are also many new construction projects for residential and commercial buildings in Greater Taipei," Liu said. "People are all fighting over labor resources. Even with higher wages, we still have a hard time finding enough workers."

Taiwan's private and public sector investment is also robust and economic growth beat Asian peers such as South Korea, Japan and Singapore in 2020, even outpacing China for the first time in 30 years.

The boom is so strong that many tech executives and some government officials are calling Taiwan the island that TSMC built.

The company is Taiwan's biggest by market cap and accounted for one-third of local stock market value and around 20% of estimated private sector investment this year, according to a Taiwan Institute of Economic Research estimate.

Taiwan's semiconductor industry, the world's second-largest by revenue after the U.S., has also elevated the strategic importance of the self-ruled island of nearly 24 million people that China views as part of its territory. Total revenue in the sector, led by TSMC, accounts for about 15% of gross domestic product, according to the government.

Taiwan-made chips power key electronic devices and are crucial to national security in various countries. The U.S.-China tech spat has highlighted the key role of TSMC and its peers.

TSMC makes chips for iPhones, Google's data centers, Nintendo and Sony game consoles, automakers such as Ford, Honda and Daimler and U.S. F-35 fighter jets, among others. It supplied chips for Huawei's high-end smartphones and telecom equipment before the U.S. changed its export control rules to cut off the Chinese tech champion's supplies. 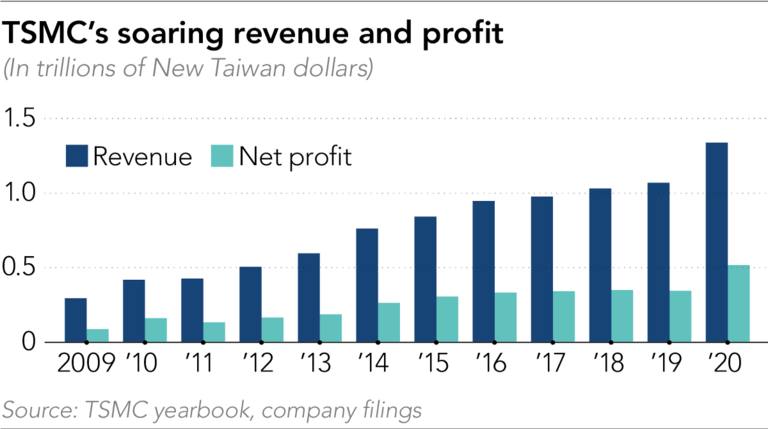 U.S., European and Japanese carmakers have all recently approached Taiwan to urge domestic chipmakers to increase production of automobile-related chips to resolve the global crunch. Taiwan's economy minister even asked Germany's representative on the island about possibly providing chips in return for Berlin's help in securing COVID-19 vaccines.

"Chips are really at the center of the global supply chain," Liu said. "Since TSMC supplies such a wide range of customers worldwide and builds some of the industry's most advanced chips, it is at the very center of the center. But that also means it will receive all kinds of political and economic pressure from major economies such as the U.S., Japan, Europe and China."

A senior executive at Powertech Technology Inc., the world's biggest memory chip assembly and testing provider, said TSMC and Taiwan's entire semiconductor industry have made the island a safer place. "As long as TSMC continues to take the technology lead, Taiwan will have this edge and significant position in relation to China, the U.S., Japan and Europe, which all need chips from the company." 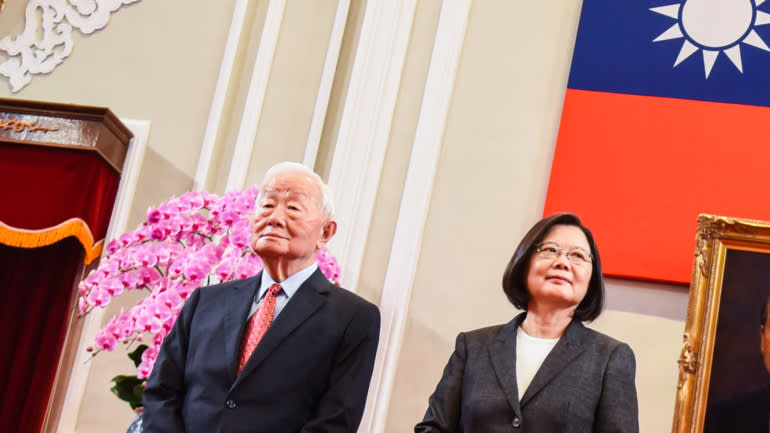 As China and the U.S. feud, Taiwan has attracted approximately $1.19 trillion New Taiwan dollars ($42.5 billion) of investments from 783 companies since late 2018, according to the latest government data on Feb. 4. iPhone assemblers Foxconn and Pegatron, MacBook builder Quanta Computer and iPad maker Compal Electronics are among those increasing investments.

Taiwan's success in containing the coronavirus -- it has had less than 950 cases to date -- has helped manufacturers keep factories humming as many parts of the world imposed lockdowns.

New housing prices in Hsinchu and Tainan, the cities where TSMC is carrying out big plant and research center expansions, has increased about 15% over the last two years, said housing data provider Ubhouse. Taoyuan, where TSMC operates a chip packaging facility and other Apple suppliers like Quanta, Pegatron and Foxconn are all boosting production capacity, saw a similar increase in home prices. Indeed, Taiwan real estate transactions grew more than 31% in 2020 on year to around NT$100 billion, with more than 50% coming from tech manufacturers' acquisitions of plants and buildings, according to real estate research agency Cushman & Wakefield Taiwan. Land transactions are also hitting highs.

But the boom raises the question of whether the island's limited labor, water and power resources can meet longer-term demand growth.

"On top of the low birthrate, fewer and fewer young people are willing to work at construction sites," said Liu, the construction supervisor. "Foreign workers are not the ultimate solution as the government sets limits on their entry and many positions, such as electroplating specialists, require professional knowledge."

Huang, the site manager, said labor shortages are unlikely to disrupt the Big Tech companies but might cause delays for public projects and in commercial real estate. 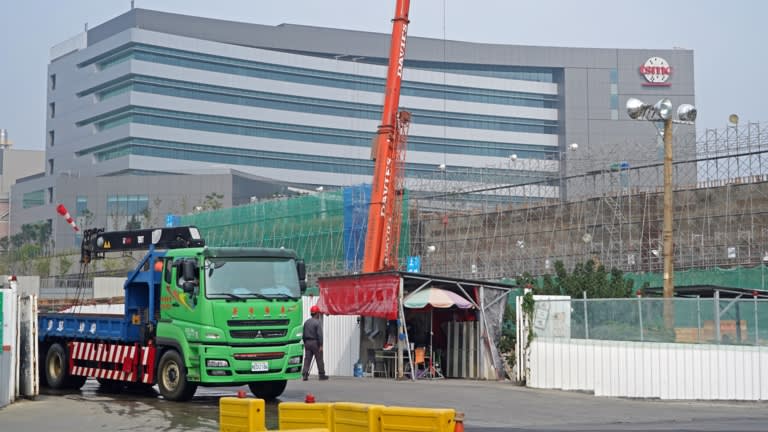 A TSMC plant under construction in Tainan, Taiwan on Jan.4, 2020. (Photo by Akira Kodaka)

The government has placed the cities and counties of Hsinchu, Miaoli, Changhua and Taichung on alert for water shortages amid limited rainfall since December.

President Tsai Ing-wen's administration on Feb. 1 started using a new pipeline to draw water from Taoyuan to support Hsinchu, where the heart of the chip industry is located. Her government's pledge to increasingly adopt renewable energy and quit nuclear power by 2025 has raised electricity supply worries.

"The entire world needs TSMC for cutting edge chips... but people are concerned that Taiwan's infrastructure -- such as electricity supply -- may not be able to fully support its growth and expansion because such advanced chip production equipment and plants consume much more energy than before," said veteran chip analyst Mark Li at Bernstein Research.

The auto chip scarcity and U.S.-China tensions have prompted governments to strengthen their semiconductor supply chains.

"The pandemic and the latest chip shortage in the automotive industry have all made key countries around the world realize they need to increase local supplies for all kinds of vital components including medical equipment, semiconductors and key electronic devices," TIER's Liu said. "In the long run, all these major economies will hope to encourage their own chipmakers to expand local plants or continue to lure more foreign investments there."

Willy Shih, a professor at Harvard Business School told Nikkei Asia that TSMC's success has made it a new global focal point of tension.

"It would be wise for TSMC to diversify [production], as hard as that might be. They really don't want to become a political pawn, though there is a lot of risk that they have already become one," Shih said.

"What people fear but no one will voice is that the easiest way for China to achieve leadership in semiconductors is to gain control of Taiwan."