Taiwan's election: A battle over identity with ballots not bullets

TAIPEI -- Campaign season is in full swing in Taiwan, with a high-stakes election just a month away. The ruling Democratic Progressive Party and the opposition Kuomintang are vying for the island's presidency and control of the legislature, but if you listen to their language, you could be forgiven for thinking they are talking about two different countries.

Kuomintang presidential candidate Han Kuo-yu is a fervent supporter of the Republic of China -- the sovereign state in mainland China from 1912 to 1949, when its government relocated to Taiwan while fleeing Mao Zedong's bloody Communist revolution. "I have a profound love for the Republic of China," Han told foreign reporters at a November press briefing.

President Tsai Ing-wen and her fellow DPP candidates are the defenders of the imagined state of Taiwan, an island that has been partially or fully ruled by outsiders for the past four centuries.

Currently maintaining the status quo of a self-ruled Republic of China, many in the DPP and other smaller parties on the Taiwanese-identifying majority of the political spectrum are biding their time, hoping to one day realize their dream of a sovereign country called Taiwan. For official events, Tsai sometimes employs a diplomatic fudge, referring to the island as the Republic of China (Taiwan).

Unlike the "one country, two systems" arrangement that the Chinese Communist Party uses to rule China and Hong Kong, Taiwan has one system -- the Republic of China government. Within this system, some politicians and their constituents may believe they live in the ROC on the island of Taiwan, while others feel they live in Taiwan under a colonial ROC government. Japan relinquishing control of Taiwan under the Treaty of San Francisco in 1952, without specifying a recipient country, is often cited by the pro-Taiwan side as evidence that the island's status is still undetermined.

The Jan. 11 election is effectively the latest battle in a quiet civil war that is being fought with ballots, rather than bullets.

"Our technology, our education, our agriculture, our athletes -- Taiwan is amazing," upstart DPP legislative candidate Enoch Wu told a crowd of thousands on Dec. 1 during a sunny afternoon rally in a blocked-off Taipei street. "Yet, nowhere in the world will you find another country as exceptional as ours that is so constantly wronged on the international stage."

Wu faces an uphill battle as he is challenging Kuomintang legislator Wayne Chiang -- the great-grandson of Chiang Kai-shek and grandson of Chiang Ching-kuo, the successive rulers of Taiwan during 38 years of martial law known as the White Terror. During their reigns, both Chiangs maintained that Taiwan was a part of China, an obsession that resulted in Taiwan's exclusion from the United Nations and forced it to compete in the Olympics as "Chinese Taipei," among other indignities.

While the race between Wu and Chiang has been fairly civil, it also hits close to home. It is well-known that Wu's father, Wu Nai-teh, was twice prevented from joining the prestigious research institution Academia Sinica due to the political climate under Chiang Ching-kuo.

After returning from the U.S. in 1987, where he had advocated for democratizing Taiwan while a graduate student in Chicago, the elder Wu was accepted for a research position only to be blocked from taking the job. This caused a firestorm in local media, which had recently been freed from government censorship.

During his stump speech, the legislative candidate Wu recounted hearing the news of Chiang Ching-kuo's death in 1988 as a schoolboy. He said he told a friend that he thought Chiang was a bad person for the influence his rule had had on his father's career.

"Never in my wildest dreams would I have thought that so many years later, his grandson and I would square off in the political arena," he said to cheers. 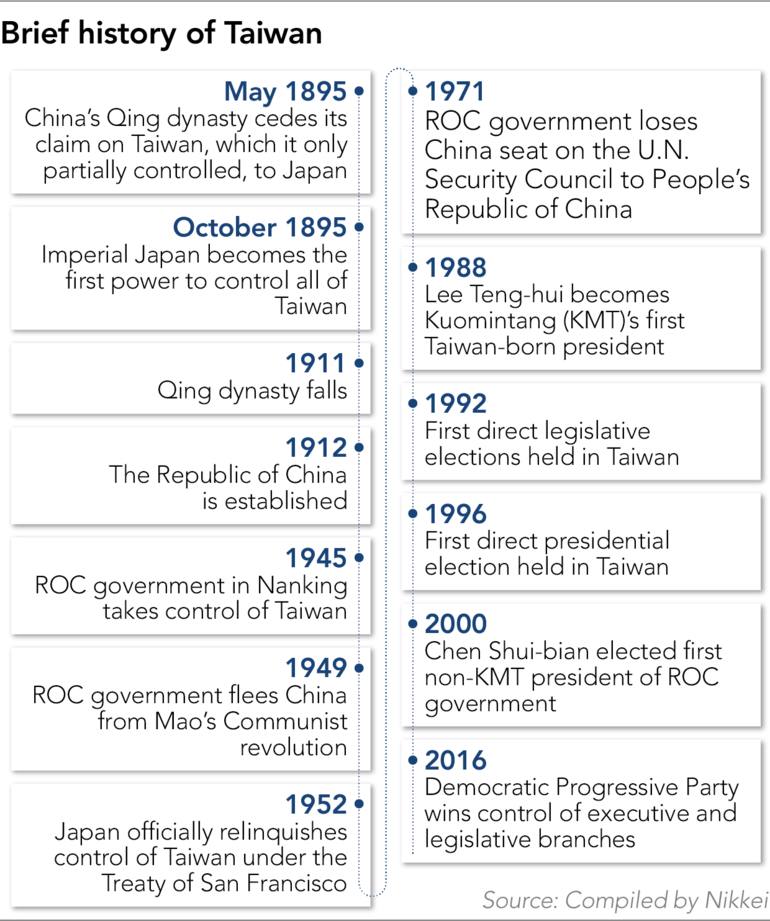 Even though President Tsai's reelection chances are looking good, as well as her party's odds of retaining the legislature, Taiwan's young democracy has proved time and time again that predicting how voters will feel on election day is a difficult task. This was demonstrated most recently in last year's Kuomintang trouncing of the DPP in local polls. Han pulled off a stunning victory to become mayor of the DPP stronghold of Kaohsiung -- rising to international prominence -- while Tsai resigned as chair of her party.

The two parties' primaries earlier this year helped change the fortunes of both candidates. Billionaire Terry Gou, of Foxconn fame, failed in his bid for the Kuomintang nomination but nevertheless unleashed attacks that ate into Han's popularity. Tsai, who faced an unexpected challenge from her former premier (and now running mate) William Lai, awoke from her slumber to secure the nomination with a fierce campaign that highlighted her formidable skills as a political operator.

Moving from strength to strength, Tsai took advantage of Beijing's handling of pro-democracy protests in Hong Kong to hammer Han on his pro-China agenda.

Indeed, a poll published on Monday showed she had widened her lead over her Kuomintang rival. The Apple Daily survey showed 50.8% of respondents said they would vote for Tsai, while only 15.2% picked Han. 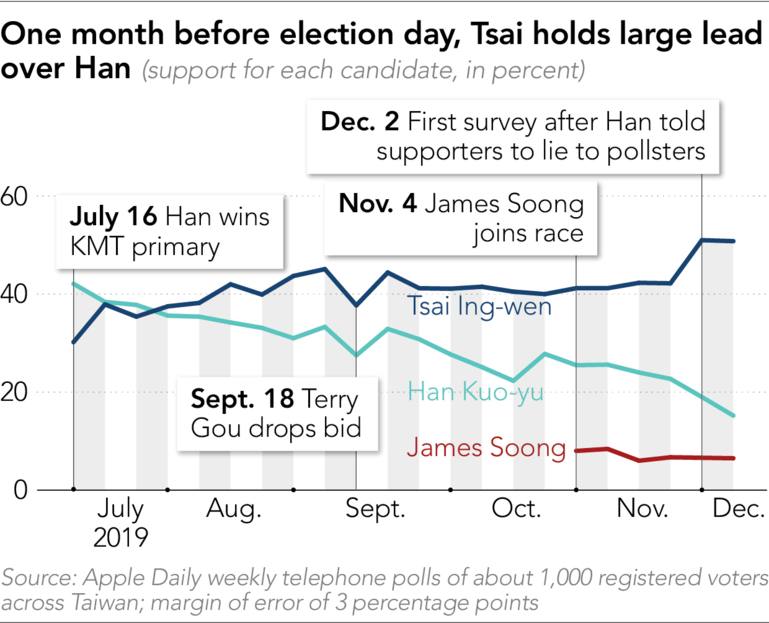 As often happens in civil wars, bigger players -- in this case, China and the U.S. -- lurk in the background. Both Beijing and Washington have keen interest in the outcome of January's election.

For the Chinese Communist Party, which claims Taiwan as its territory despite having never ruled it, the island is the gateway to becoming a true global superpower. Controlling Taiwan would enable it to break the chain of U.S. allies that constrains its Pacific access, allowing it to challenge the American military presence in Japan, Guam and elsewhere, while giving it the ability to disrupt shipments of oil to Japan and South Korea.

For Washington, Taiwan is an integral link in the security order it has underpinned in East Asia. Taiwan's world-beating semiconductor industry is vital to American consumer and military technology. An annexation of Taiwan by China would drastically reduce American relevance to Asia, and the world.

Neither China nor the U.S. has publicly endorsed either presidential candidate or their parties, but it is taken as a given here that Beijing prefers Han and the Kuomintang while the U.S. would like to see Tsai and the DPP retain their control of Taiwan's executive and legislative branches. 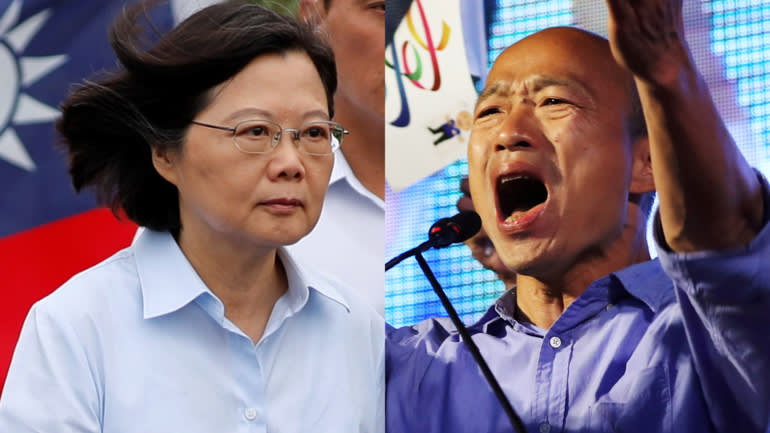 Beijing's desire to absorb Taiwan has -- not unexpectedly -- been a major issue in this year's campaign. The Kuomintang has blamed Tsai for the deterioration in cross-strait relations. Tsai herself has called for dialogue without preconditions, while Chinese President Xi Jinping insists she accept the so-called 1992 Consensus endorsed by Beijing and the Kuomintang, which posits that Taiwan is a part of China.

"I have always said I will spare no effort in defending the sovereignty of the Republic of China," Han told The Wall Street Journal in a December interview, in which he suggested Taiwan has no choice but to establish closer economic relations with China. In Taipei and elsewhere in Taiwan, posters featuring Han and the slogan "1992 Consensus -- strive for the economy" look out over busy intersections.

Han has tried to balance his opposition to a Taiwanese state by rejecting a Hong Kong-style arrangement with China, positioning himself as "opposing Taiwanese independence and opposing 'one country, two systems.'"

"Sovereignty is what we care about most," Tsai told a Dec. 1 rally in New Taipei City, with a backdrop that read, "Defend democracy, defend Taiwan." She asked an audience of thousands to imagine a Taiwan in which the Kuomintang had been the ruling party for the past three-plus years: What direction would they have taken Taiwan? What stance would they have taken on this year's developments in Hong Kong?

"Tsai Ing-wen hasn't yielded an inch on Taiwanese sovereignty," she said. "We refuse to submit in the face of Chinese pressure."