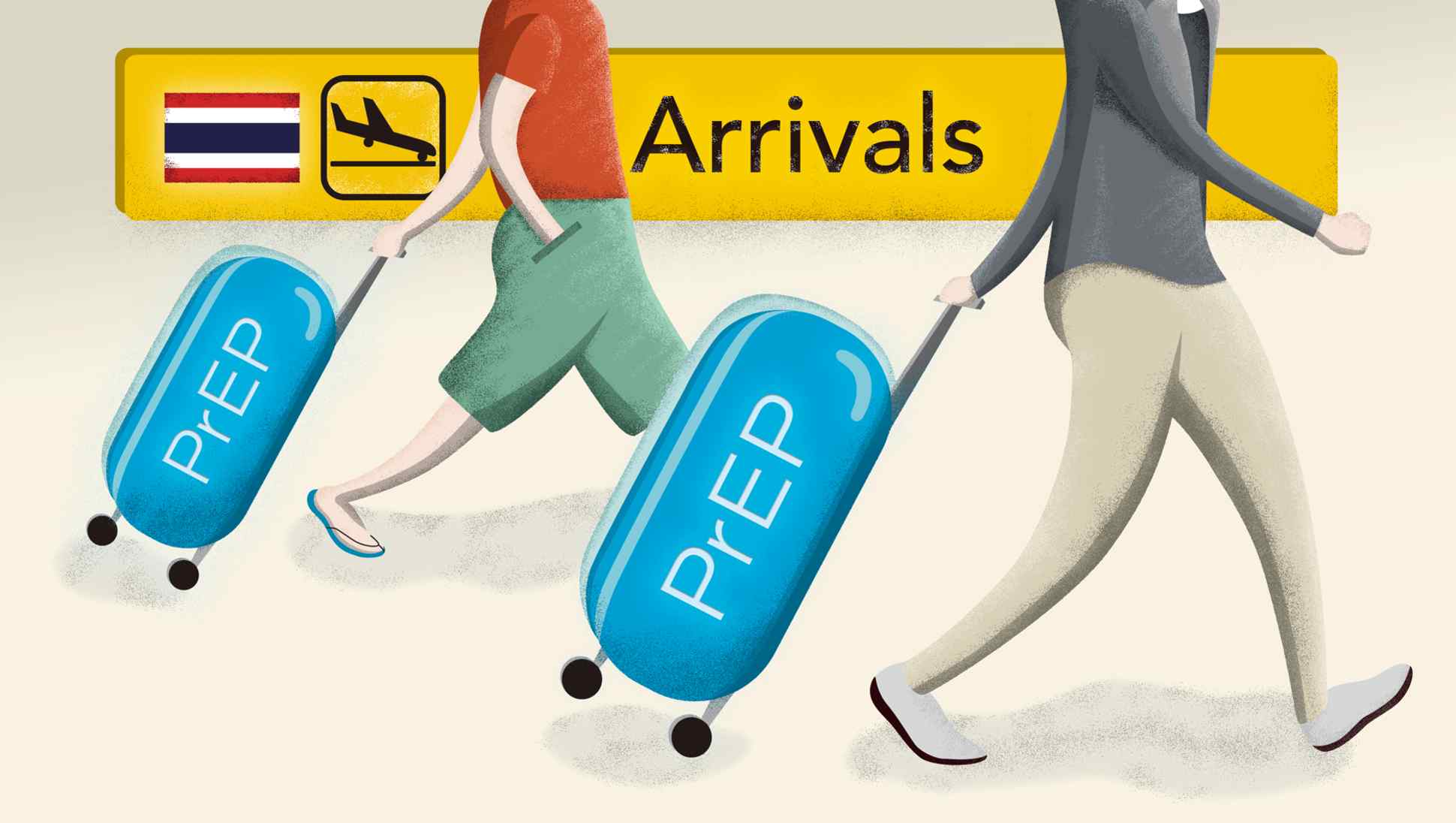 Thailand is a leading center for medical tourism in Asia. A growing niche in this important industry is made up of people seeking HIV prevention treatments that are expensive or unavailable elsewhere.   © Illustration by Eri Sato
Asia Insight

SEOUL -- In 2017, David Lee, 34, boarded a flight from Seoul to Thailand, a popular holiday destination for the nearly 2 million South Koreans who visit the subtropical country annually. But Lee was not going for the pad thai noodles and dreamy white sand beaches.

"I went to protect myself against HIV," Lee -- not his real name -- tells the Nikkei Asian Review.

Thailand is a leading global destination for medical tourism, where patients travel abroad for private health care: Global Markets Insight forecasts that by 2025 Thailand's industry will be worth $500 million, and the government has a strategy to encourage it.

But while medical tourism in Thailand is usually associated with affordable, high-quality surgery, dentistry and even face-lifts, now there is an important and growing niche: preventing HIV.

PrEP, or pre-exposure prophylaxis, is a preventive medicine which reduces the risk of getting HIV through sexual intercourse. There is no scientific doubt about its effectiveness, offering almost 100% protection if taken as instructed.

In the U.K., Public Health England announced in January that the annual number of HIV infections among gay and bisexual men had dropped by over 70% since 2012, partially attributable to a rise in the use of PrEP. In the U.S., the department of health recently launched a program to make PrEP available for free to uninsured people as part of President Donald Trump's "Ending the HIV Epidemic" initiative.

However, its availability, accessibility and level of awareness are still limited in many Asian countries, despite proof that it works and the consequent savings to health care systems from treating fewer HIV-positive patients.

On top of a lack of comprehensive sexual education in the region, prevention can be expensive: In South Korea, where new HIV infections have not fallen since 2013, a one-month supply of Truvada, the branded PrEP drug produced by U.S. pharmaceutical giant Gilead Sciences, will set you back around $350.

There are also cultural obstacles. PrEP's connection with HIV means it is automatically associated with homosexuality, often by conservative or religious circles. While attitudes are slowly changing across the region, the subject in many parts of Asia is still considered taboo, if not sinful. In South Korea, for instance, the powerful Christian lobby claims that "encouraging" homosexuality will spread AIDS and waste taxpayer money on medical treatment. 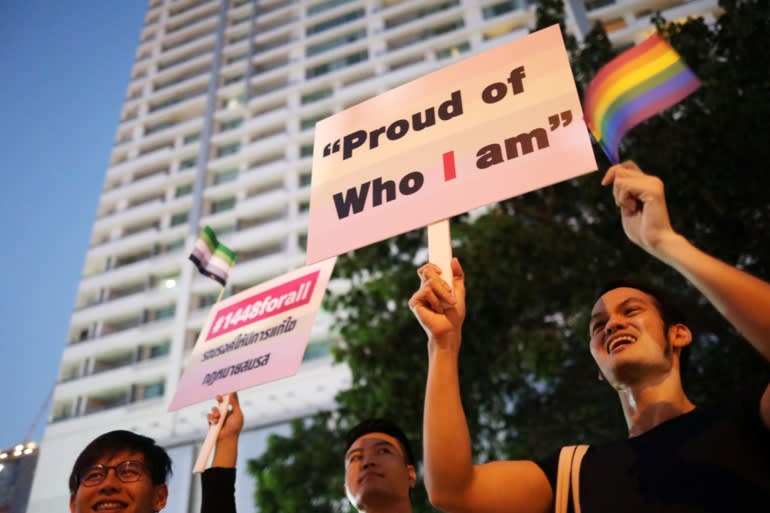 LGBT activists gather for a gay pride parade in Bangkok in November 2018: Cultural taboos in some parts of Asia make education about treatments that can prevent HIV infection difficult.   © Reuters

Trials of PrEP are under way across Asia, but these come with limitations: in Japan, a clinical trial, due to end in 2021, has 120 participants, a small number in a country of 127 million. In South Korea, a PrEP trial was carried out and Truvada has been subsidized since June 2019 under the country's national health insurance, but only for those with HIV-positive partners.

Dr. Yang Chia-Jui of Taiwan's Far Eastern Memorial Hospital told the Nikkei Asian Review that while it is convenient to get PrEP at hospitals designated for HIV care, only those who qualify for the Taiwan Centers for Disease Control PrEP program can do so: Patients must either be under 31 or have an HIV-positive partner. "For those who cannot attend the PrEP program, they have to get PrEP pills at their own expense," Dr. Yang says. Truvada, the only PrEP pill approved in Taiwan, costs $400 per monthly bottle.

This has led many people living in Asia for whom PrEP is not readily available to travel to Thailand, where they can obtain the drug legally, anonymously and -- perhaps most importantly -- cheaply.

"The reason why Taiwanese travel abroad to get PrEP is the cost of PrEP," Dr. Yang says of a pilgrimage that is "common among particular populations, especially men who have sex with men." The generic pill, which contains exactly the same ingredients as Truvada and is manufactured by a Thai government agency, costs as little as $20 per 30-day supply. For David Lee from South Korea, it was an obvious choice. He says his trip to stock up on a 12-month supply of pills cost about $1,000, including medication, airfare and hotel. He is far from the only one who flies to Thailand for a cheap supply of PrEP, leading to a small but sizable market catering to "PrEP tourists."

"The growth of our business has been phenomenal over the past four-plus years, as evidenced by the thousands of patients on record," says Dr. Deyn Natthakhet Yaemim, founder and CEO of Pulse Clinic in Bangkok. PrEP plays a "significant part" in the clinic's business, and more than 130 nationalities are registered.

His practice is among several in the Thai capital providing customized sexual health advice and treatment. "By approaching each patient with a nonjudgmental perspective, we are able to fully understand and advise patients," he says. Such a service is rare in other Asian countries, where perceived lack of confidentiality can be a factor in deterring people from seeking medical advice, costs aside.

"I would only consider any potential PrEP trial in Korea with the guarantee of privacy or anonymity," says Joe M., who traveled last year to Thailand for a PrEP holiday. The Seoul-based English teacher, 33, says: "I don't trust the Korean government to keep that information private and separate from my immigration status, given its history of denying visas based on HIV status and recent coronavirus patient leak scandals."

For those who cannot make regular trips to Thailand, there is another option: overseas online shops. Yuta Onaga from Colorful Heart, a Tokyo-based self-help group for LGBTQ people that also runs a Japanese PrEP information website, says that many Japanese people in need of PrEP go online to purchase the generic pill.

"People who want to take PrEP in Japan, even though living in Tokyo, have no easy access to it. There are lots of barriers," he says. Discussions surrounding PrEP are also limited. "Most HIV/AIDS related organizations in Japan do not want to promote PrEP." The stigma of promiscuity and its association with HIV mean that many are still reluctant to discuss the benefits of PrEP, and lack of information about PrEP in the local language is another factor.

Instead, these organizations "strongly believe that condoms are the best way of prevention of HIV infection," says Onaga. PrEP is not a substitute for condoms: it does not protect against other sexually transmitted diseases. It also requires regular blood tests for HIV and other tests to ensure the body is reacting well to the drug. But it works.

Until social discourse and perceptions change, Joe M. is determined to continue making the 7,400 km round trip to Bangkok. "Other sexually transmitted diseases are curable, but HIV is not. It's disappointing that so many countries in Asia are so far behind when it comes to sexual health issues. Governments should be making PrEP available to all who need it," he says.

For Lee, there is also another reason for using the drug. "If we can eradicate HIV by properly using PrEP, I believe this will also help change people's prejudice against gay people."