TOKYO/BANGKOK -- Political parties started by young leaders in Southeast Asian countries in recent years are hoping that discontent with the status quo will help them grow and get a chance to change politics as usual.

Support for youth-led parties in Thailand, Malaysia and Indonesia might get some boost from unhappiness with the response of the countries' governments to the COVID-19 pandemic, which has battered the region.

Unlike long-standing ruling or dominant parties, the newer ones are building digital-first, nonhierarchical platforms aimed at appealing to the young. And Southeast Asia is young, with a median age of 30.

To be sure, the relatively new parties face big obstacles to expanding, starting with the power of the status quo. In Malaysia, authorities rejected the application of the Malaysian United Democratic Alliance (MUDA) to register as a political party. It has appealed the decision by a body under the Home Affairs Ministry.

Also, the parties face difficulty attracting backing beyond an urban youth base. In small towns and rural areas -- where much of the population still lives -- support for the political establishment tends to be much higher than in the capital cities.

"We do not have a strong political base like the old-fashioned political parties have," Pita Limjaroenrat, the 40-year-old leader of Thailand's Move Forward Party (MFP), acknowledged in an online interview with Nikkei Asia. 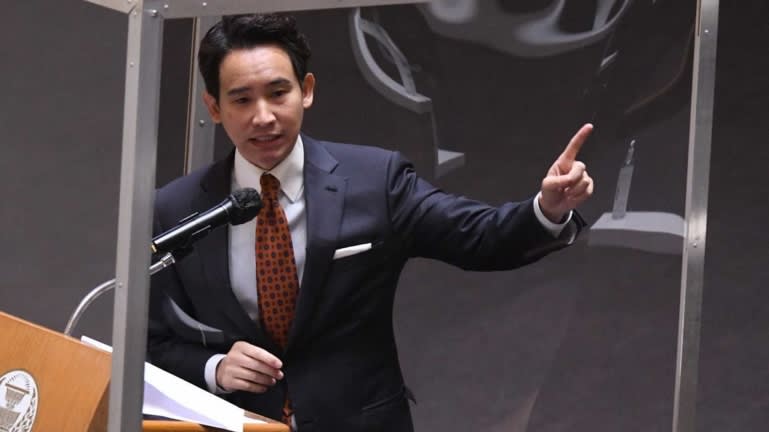 Also, just because voters are young, of course, doesn't mean they will get behind parties with younger leaders.

"The youth voter bloc is not a monolithic, singular bloc, and courting the entirety of the youth demographic will be hard," said Piya Raj Sukhani, a political research analyst at the S. Rajaratnam School of International Studies (RSIS), Nanyang Technological University, in Singapore.

It's Thailand where support for a party from young voters has made the biggest mark so far. Pita's MFP is the successor to the dissolved Future Forward Party, which in 2019 elections won 81 of 500 seats in the Thai parliament, a strong first-time showing.

"Future Forward has been the biggest contributor toward youth political participation in decades," said Aim Sinpeng, a researcher at the University of Sydney who focuses on Thai youth politics. "Their youth-centric campaigning mobilized first-time voters, younger voters and even those yet ineligible to vote to become active participants in the political arena."

But then-party founder Thanathorn Juangroongruangkit was banned, and Future Forward was dissolved, following a court ruling that it had violated an election law -- a charge many critics said was politically motivated. Of its 81 elected members of parliament, 53 are MFP members.

The MFP "wants to make changes in Thai politics in the long term such as slashing vote-buying," Pita told Nikkei. To deliver such changes, amending the constitution which has a charter allowing army-picked senators to select the prime minister is the crucial first step. The existing constitution was drafted by the junta led by Prayuth Chan-ocha and approved in an August 2016 referendum.

On June 16, Pita submitted a bill to amend the constitution, which has no chance of passage given parliament's composition. Most of the 17 parties holding seats support the pro-military Palang Pracharath party-led ruling coalition, which backs Prayuth.

Pita has blasted the Prayuth government for its response to COVID-19. In parliament on July 1, he criticized as inefficient and wasteful the functioning of a committee he set up to combat the coronavirus. "All the decisions (by the committee and government) are too late and too little," the MFP leader said, adding that Thailand needed a new cabinet to "break the bottlenecks" in the country's health system.

In a Facebook posting on July 17, when Thailand's COVID-19 case count topped 10,000 a day -- it now has topped 15,000 -- Pita again criticized Prayuth, saying that because of his actions, Thailand "always lags behind the situation" in combating the coronavirus. 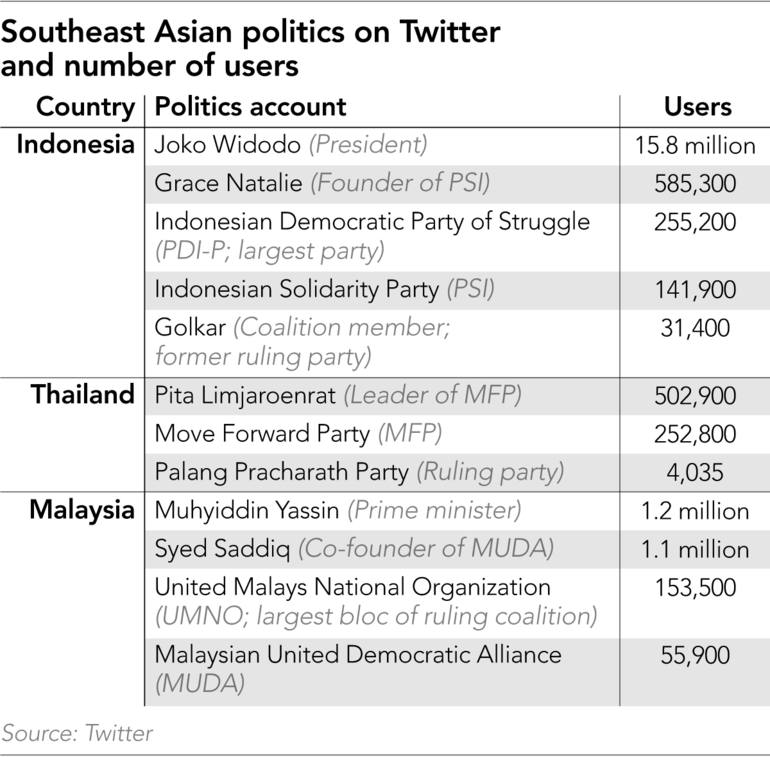 In neighboring Malaysia, there's discontent with Prime Minister Muhyiddin Yassin for multiple reasons, including the way he came to power through approval of the king rather than voters, his government's COVID-19 response and how long parliament has been suspended under a state of emergency. The parliament reopened on Monday after a seven-month suspension. Muhyiddin was pressed by King Sultan Abdullah Ri'ayatuddin to restart the legislature to allow debate and validation of law changes made during the emergency period.

This gave an opening to the party known as MUDA (meaning "youth" or "fresh" in Malay), which was created in early 2020. In spite of the inability to hold in-person events, the group says it has over 30,000 members. Its leader is Syed Saddiq Syed Abdul Rahman, Malaysia's youngest member of parliament at age 28.

"The current parties in power are making decisions that don't seem to be related to the electorate," said Zaidel Baharuddin, a MUDA spokesman. "The biggest group that feels this divide in power is the youth vote, who are entering a more challenging job market, economy, and more aware of issues." Syed Saddiq Syed Abdul Rahman is leader of the Malaysian United Democratic Alliance (MUDA), whose registration application has not been approved.   © Reuters

Prior to joining MUDA, Zaidel was a member of the United Malays National Organization (UMNO), the leading party in the Barisan Nasional coalition that ruled Malaysia from 1974 until 2018.

"I started from the ground as a volunteer worker," said Zaidel. "Throughout the years, as I climbed the ranks, I saw some major institutional problems ... and corrupt practices."

He hoped UMNO's shock defeat in 2018 elections would bring reform but said it didn't, adding: "Always the same group of people in power, and can't expect changes from people who benefited from the system."

"MUDA is like a startup that aims to be a disruptive force in the market," said Zaidel. "The way we formed, during the pandemic, was different, and we rely on digital platforms, and that makes us very different from traditional parties in Malaysia."

MUDA, if it is registered and can contest elections, will need to face the power of UMNO and Malaysian racial politics. "The power of majoritarianism cannot be underestimated, and because MUDA is branding itself as a multiracial party, will have to deal with immense pressure from parties that propagate for Malay Muslim supremacy," said Sukhani of RSIS.

In Southeast Asia's largest country, the Indonesian Solidarity Party (PSI), founded in 2014 and led by 39-year-old former journalist Grace Natalie, has already been in one national election, in 2019. It won 1.9% of the votes and did not get any seats in parliament. But it won some seats on assemblies in Jakarta and Bali and, according to recent polls, it is the second-most-popular party in Jakarta, after the Indonesian Democratic Party of Struggle (PDI-P), long led by the late President Sukarno's daughter Megawati Sukarnoputri. 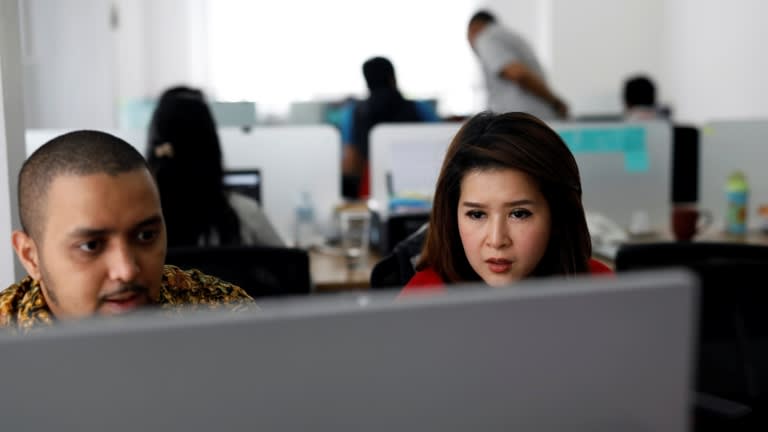 Former journalist Grace Natalie is the leader of the Indonesian Solidarity Party, which opinion polls this year say is the second most popular party in Jakarta.    © Reuters

"Our committee members are young, and the issues that we bring, and our style, is very fresh compared to existing parties," said Michael Victor Sianipar, head of the PSI's Jakarta branch. "In other parties, if you are young and don't have connections, you don't have a chance to even be included."

In Indonesia, party alliances are fluid, and opponents often become allies. Former presidential candidate Prabowo Subianto joined rival President Joko "Jokowi" Widodo's cabinet after losing the 2019 election, bringing his party, Gerindra, with him -- to the chagrin of some former supporters. According to a survey by New Mandala, an academic blog hosted by a school at Australian National University, only 11% of Indonesians feel close to any of the 10 parties with seats in parliament, a plunge from 80% in the early 2000s.

The survey also found few ideological or policy differences between parties, all of which are slightly center-right on the political spectrum. Voters have little say in the candidates parties choose, many of whom are picked due to their connections or wealth. This is one area where the PSI feels it can stand out.

"The party brings up a lot of issues that are relevant to young people -- environmental, livability, health care," said Michael. "Our argument is simple -- if you care about those issues, why don't you join the party, or run for office?"

In Southeast Asia, party elders make the decisions. In the PSI, said Michael, "the way we make decisions and have discourse is that we're all equal, there's no senior and junior. If someone is older, it doesn't mean they have a greater say." 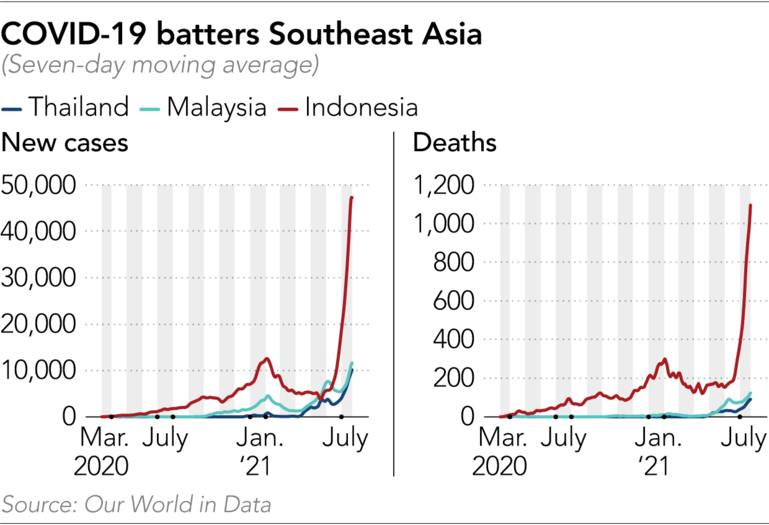 Both MUDA and the PSI aim to mimic Thailand's Future Forward Party, the MFP's predecessor, which used social media platforms like Twitter to spur growth and achieve a surprisingly strong showing during the 2019 elections.

"The Future Forward Party viewed Twitter as an untapped source of potential supporters, as the party's campaign strategy was youth-focused," said Sinpeng.

For the three parties in the three regional countries, communicating with others besides tech-savvy young people is an issue. Pita of Thailand's MFP said: "We need to apply both online and on-ground platforms to communicate with Thai people in order to get their comments and feedbacks to brainstorm and figure out policies that match their demands."

Another issue is whether these parties will be allowed to grow into formidable opponents. There are concerns that the tactics used against Future Forward could impact the MFP, already the subject of a complaint to the Election Commission. In Indonesia, the secular PSI has to tread carefully to ensure it can't be criticized as anti-Islamic, which is what took down popular Jakarta Gov. Basuki Tjahaja Purnama, imprisoned in 2017 on blasphemy charges.

In Malaysia, MUDA needs to get registered to compete in elections. "MUDA's momentum has been hampered by the current ruling coalition," said Sukhani of Singapore's RSIS.

The parties will need to be prepared for setbacks. In December, The MFP lost in elections of provincial heads in all 42 provinces it contested. The momentum of the pro-democracy protests led by the younger generation, largely supporters of the MFP, lost steam after the government's crackdown in which draconian lese-majeste charges were placed against some protesters since late last year.

The real test will be the next national elections, which could be as soon as this year in Malaysia, in 2023 in Thailand and 2024 in Indonesia. Much has to be done to compete against parties like PDI-P, UMNO and Palang Pracharath and their long-established networks.

Changing politics as usual in Southeast Asia is a steep challenge. Pita of the MFP said his party wants to push ahead "the politics of possibility because we believe making changes in Thai politics is possible."

"We have to revive ourselves as well as disrupt ourselves, otherwise we could be disrupted at the end," he told Nikkei. "You have to adjust yourself all the time."

Correction: The table on Southeast Asian politicians’ Twitter followings has been amended to remove an inaccurate count for Prayuth Chan-ocha.