Laem Chabang's new terminal was scheduled to open in 2028, but now partial operations are to start in July. (Photo by Takaki Kashiwabara)
Asia Insight

BANGKOK -- Thai Deputy Prime Minister Somkid Jatusripitak turned on the charm earlier this month when he took the stage at a business forum in Fukuoka, in southern Japan.

With a beaming smile he rarely shows in public back home, the economic czar spent nearly 10 minutes of his 40-minute speech expressing deep affection for Japan -- from the country's hot springs to its robotics. His message to the audience of 900 potential investors was simple: "We love you ... so we need your help."

Thailand's military junta is eager to attract investment, especially for the Eastern Economic Corridor, a new special economic zone geared toward advanced technology such as aviation and automation. Public and private funds totaling more than 1.5 trillion baht ($45 billion) are to flow into infrastructure projects, from airports and deep-sea ports to high-speed railways and roads.

The goal is to spur growth that has lagged behind regional peers in recent years, coming in at 3.9% in 2017.

The kingdom is Southeast Asia's second-largest economy, but for decades it has been stuck in the so-called middle income trap, where wage inflation makes industries less competitive. "We need to update ourselves and develop into the next stage," Somkid told the Nikkei Asian Review in an interview. Many critics -- including Somkid, a trained economist -- blame the country for depending on cheap labor and natural resources for too long, while failing to upgrade technology and foster skilled workers. Now, Thailand's median age of 38 is the oldest in Southeast Asia after much-wealthier Singapore.

To wriggle out of the trap, the military government of Prime Minister Prayuth Chan-ocha has laid out a 20-year strategy for achieving high-income status by 2036. This would mean more than doubling per capita income from $5,640 in 2016. Parliament is expected to approve the plan by July, before the general election promised for late 2018.

The government calls the strategy "Thailand 4.0," apparently taking a cue from Germany's "Industry 4.0." Thailand defines 4.0 as the highest stage of innovative, value-based industry, with an emphasis on 10 fields including robotics, medicine, aviation, bioenergy and biochemicals, and digital. The country is still at level 3.0, heavy industry.

The EEC special zone, which spans three coastal provinces east of Bangkok -- Chachoengsao, Chonburi and Rayong -- is central to the plan. The junta hopes to repeat the success of the eastern seaboard industrialization launched in the early 1980s by the government of Prem Tinsulanonda, a former general like Prayuth. Prem's initiative beefed up ports and roads, giving Thailand an infrastructure edge on neighbors like Indonesia and Vietnam. This, coupled with cheap labor, an appreciating yen and a natural gas boom, brought investment from Japan, as well as the West. Thailand became an export hub for cars, electronics and petrochemicals. By 1996, the year before the Asian financial crisis, per capita gross domestic product had quadrupled.

Now, with time running out before the election, the junta-appointed parliament has enshrined the EEC into law to ensure it will live on regardless of who is in power. "We guarantee that the government is totally ready for new investment," Somkid said, adding that all planned infrastructure projects will kick off this year or next.

Speed is the order of the day at Laem Chabang port, the country's largest deep-water port, in Chonburi Province. A new 1.7km-long terminal was to open in 2028, but now partial operations are set to start in July, with the full opening scheduled for 2023. 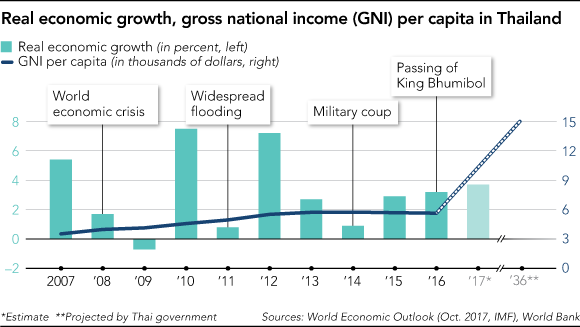 The timeline was shortened in response to the EEC plan, which called for expanding the port, according to terminal operator Hutchison Ports of Hong Kong.

At the new terminal, three towering container cranes freshly painted in yellow and blue are undergoing final inspections by Chinese engineers. The cranes were provided by heavy machinery maker Shanghai Zhenhua Heavy Industry and are the first remote-controlled models in Thailand.

With plans to add a new pier, the expansion will almost triple the port's capacity to 18 million 20-foot containers per year. This will place it among the world's 15 biggest ports, up from 22nd in 2014.

Other EEC infrastructure projects include transforming a military air base used by the U.S. in the Vietnam War into a full-fledged international airport, and creating a high-speed railway from there to Bangkok's two existing international gateways -- Suvarnabhumi and Don Mueang. Bidding for the rail project is to be held by September.

As for the airport, U-Tapao, it is expected to not only drive trade and tourism but also promote investment in the aviation business. Just as the eastern seaboard thrived with the growth of the auto industry in the early 1980s, the idea is to establish an extensive aviation supply chain in the EEC to capitalize on surging aircraft demand. Thailand is home to many auto plants, like this Toyota Motor factory in Chachoengsao Province, but little R&D is done in the country. (Photo by Nozomu Ogawa)

Last year, Airbus signed an agreement with Thai Airways International to develop an aircraft maintenance, repair and overhaul center at U-Tapao. Boeing is talking with the government about making aircraft parts and setting up a pilot training center. Japanese tiremaker Bridgestone plans to start producing aircraft tires there by 2019.

The government is dangling incentives to lure investors into targeted industries. Corporate tax exemptions will run for up to 15 years, versus the maximum of eight for other investments. Special four-year visas for skilled workers and high-level executives are also on offer, as is the right to lease state land for up to 99 years.

Last year, the Board of Investment received applications for 388 investment projects in the three provinces, worth 296.89 billion baht. This accounted for nearly half the investment applications nationwide.

In terms of foreign investment, the BOI approved 203 projects worth 119.8 billion baht. Japan, long Thailand's top investor, was behind almost half.

China is increasing its presence, seeing a connection between the EEC and its Belt and Road Initiative. Chinese e-commerce company Alibaba Group Holding has expressed interest in setting up a logistics center in the EEC. Industrial and Commercial Bank of China (ICBC), the country's largest bank, has signed a memorandum of understanding with the EEC office to help usher investors into the provinces. 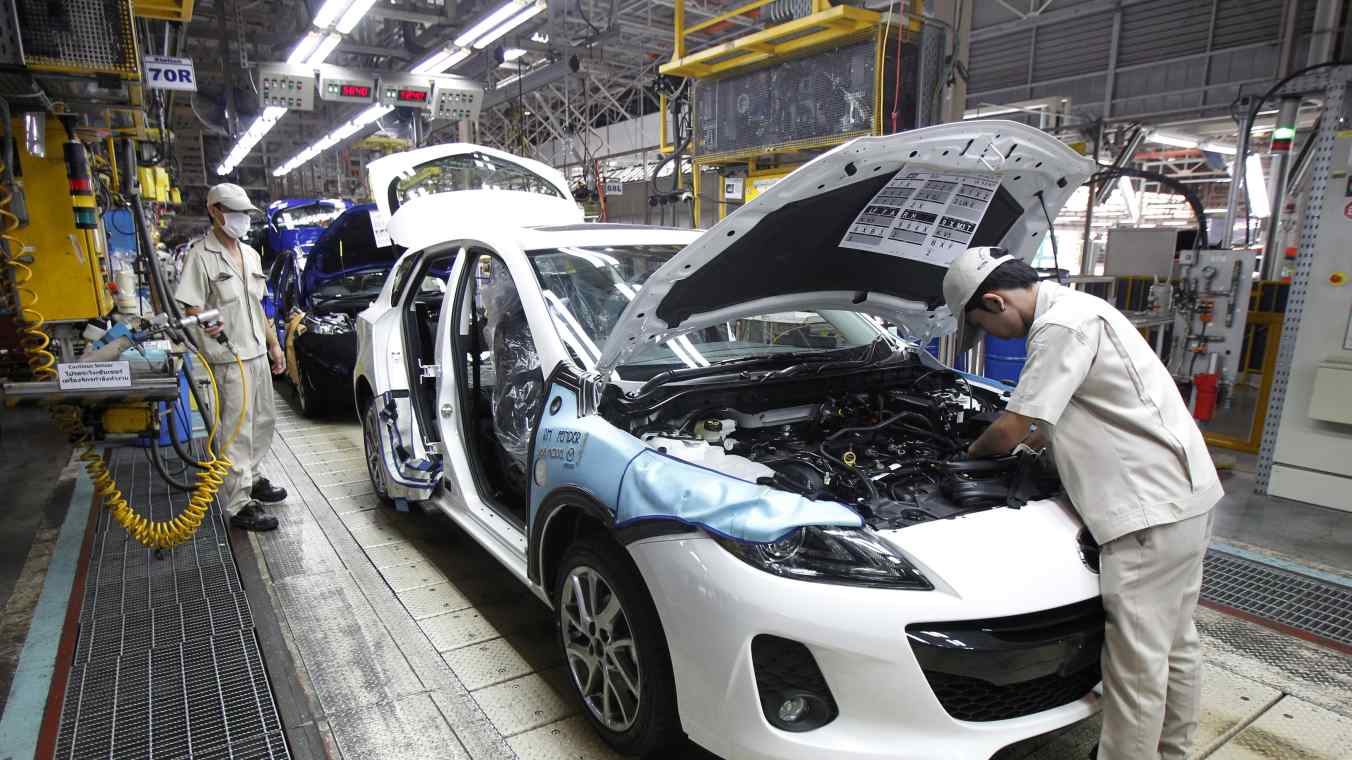 Akira Suehiro, a professor at Japan's Gakushuin University, said that from Thailand's perspective, tying the EEC to the Belt and Road would lead to more funding, including from the China-led Asian Infrastructure Investment Bank. "Unlike the development 35 years ago, the fate of the EEC could be largely in the hands of the Chinese."

Yet experts warn that investment alone will not propel Thailand to high-income status.

"We have missed the opportunity for the past three decades to take advantage of foreign direct investment," said Nipit Wongpunya, assistant professor at Chulalongkorn University's faculty of economics. "Technologies have not been transferred to Thai firms as Thailand failed to promote technological localization." Thailand ranked 50th in terms of "innovation" in the World Economic Forum's Global Competitiveness Index 2017, below Singapore, China and Indonesia. Little research and development is done within its borders, while high-tech components like camera sensors are mostly imported. The real challenge is to shift to technology-based industries over labor-intensive ones.

To absorb skills and technology, the government requires investors seeking EEC incentives to offer apprenticeship programs for students. Companies will be obliged to take on at least 50 trainees, or trainees equivalent to 10% of their EEC project teams.

"We see human resources development as the key for our success in the future," said BOI Secretary-General Duangjai Asawachintachit. "We would like the private sector to participate or to contribute as it will be, in the end, a win-win for them too."

Another priority is to improve early science education. On this front, Thailand ranks at the bottom of Southeast Asia's middle-income countries, according to the WEF index.

One hope lies nestled in the lush forests of Rayong. At the Kamnoetvidya Science Academy, or KVIS, an elite technology-focused high school sponsored by state oil and gas company PTT, students wearing purple polo shirts with green collars listen to teachers from around the world. Lectures are delivered in English. "What is the system in the ear that is responsible for balancing?" asks a biology teacher from Australia. "Semicircular canals," a student answers, with the help of a language assistant teacher.

The boarding school has only 18 pupils per class, with just one place available for every 70 applicants. Annual costs per head run to about 880,000 baht, but enrollment fees are waived for all three years. KVIS, an elite science academy in Rayong Province, has one place available for every 70 applicants. (Photo by Takaki Kashiwabara)

"A lack of quality education means that talented students will head abroad," KVIS Principal Thongchai Cheprecha said. "But I tell my students that even if they go to universities abroad, they should come back to help develop the country, become the next Steve Jobs and change Thailand to a producing country."

A WEF survey of business leaders, though, shows companies have a bigger worry: political turmoil.

Frequent changes in government, including 19 military coups since 1932, have led to delays and cancellations of major infrastructure projects and abrupt shifts in investment policies. Relatively calm business conditions under the current junta, which took power in a 2014 coup, are largely thanks to a ban on political activity. The restrictions will be lifted once election campaigning starts.

For over a decade, the country's social fabric has been torn between the Bangkok elites, who back the military, and farmers and other low-income earners who support fugitive former Prime Minister Thaksin Shinawatra. Large public protests have flared up time and again.

"Japanese companies have continued investing in Thailand over the past decades, regardless of the political situation, because of the infrastructure and supply chains that are already established in the country," Gakushuin University's Suehiro said. But once disruptive technologies like internet-of-things production "start coming into China or Southeast Asia, that advantage could easily disappear."