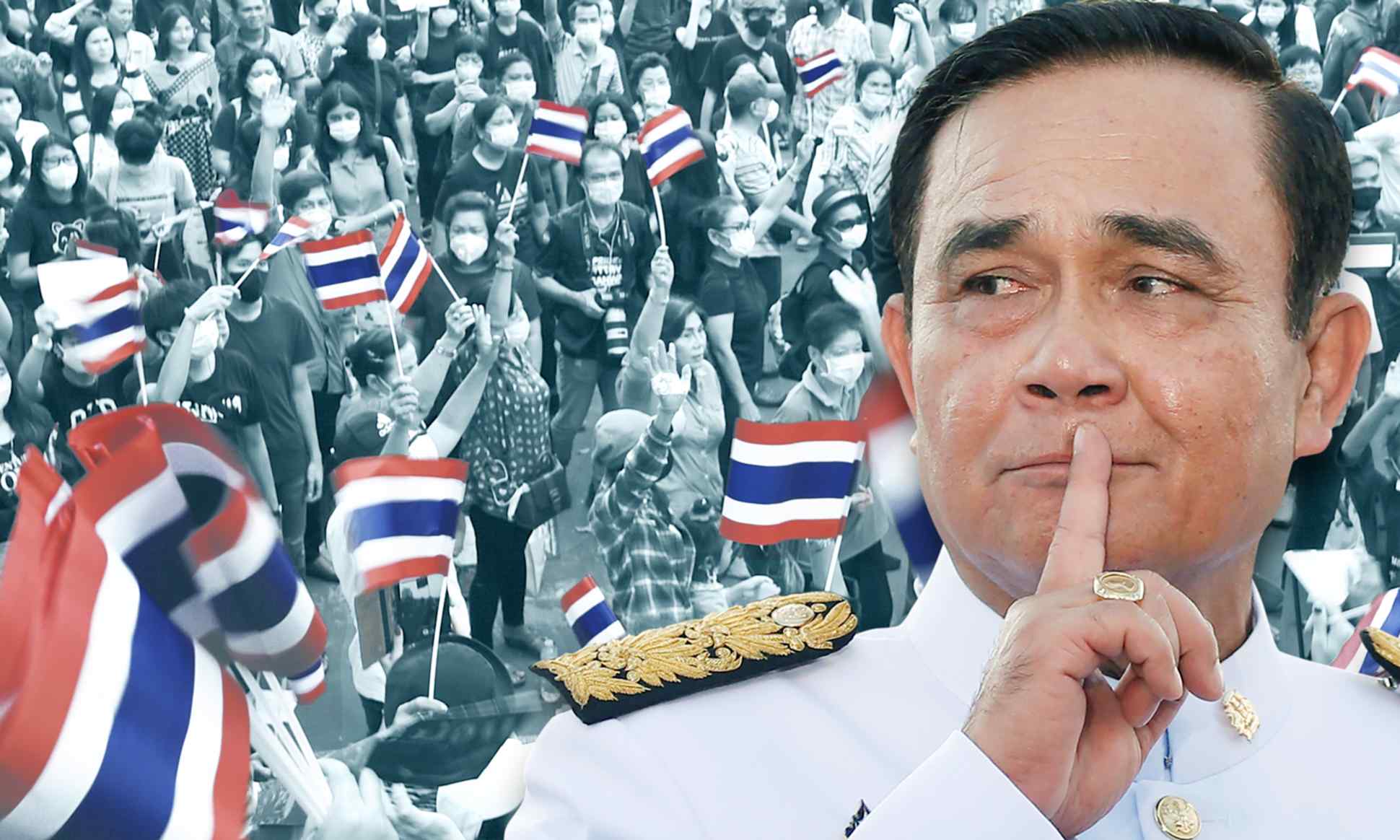 NAKHON PATHOM, Thailand -- Four Buddhist monks were chanting prayers -- the funeral rites for Thee Pieanmag, a 32-year-old building contractor who had died by suicide in his home.

A sprinkling of Thee's family and friends, all dressed in black, had gathered at Wat Maipinkleaw temple in Nakhon Pathom, west of Bangkok. Beside the coffin was a sepia-toned photo of Thee in a silver frame.

Weerapong Pieanmag was at a loss to understand his younger brother's suicide. "He showed no signs of trouble about his building business, even if it was becoming difficult to get building materials on credit," Weerapong said.

Thee's death was reported in Thai Rath, the country's largest Thai-language daily. The newspaper ran a story in early March, with grim details of his final hours and a headline stating that his suicide was because of "a huge debt."

His premature death was far from an isolated case. Stories of suicides related to financial hardship have become all too familiar in Thailand over the last year -- a dark measure of the costs as Southeast Asia's second-largest economy stutters.

In mid-February, a used-car dealer led his family of four in a mass suicide in Phitsanoulok, a northern province. A note left on his phone revealed he had business debts of over 10 million baht ($313,000).

Just after Thee's death, a 56-year-old businessman in the plastics trade from Samut Sakhon, south of Bangkok, died in another suicide attributed to money problems.

The kingdom has the highest suicide rate in Southeast Asia, at 14.4 per 100,000 people, according to the World Health Organization. Experts see little hope of improvement, at least when it comes to economy-related cases, as the country's middle and working classes will continue to face a storm of problems -- rising debts, weak consumer spending, factory closures, falling commodity prices and a harsh drought, to name a few.

And now, there is the impact of the new coronavirus spreading across the globe. Massage shop workers wait for customers in a tourist area of Bangkok on March 6. The coronavirus pandemic is just one headwind hitting Thailand's small businesses.    © Reuters

Already, in 2019, Thailand's economy grew just 2.4%, one of the slowest rates in the past five years, according to the National Economic and Social Development Council (NESDC), which plans the country's economic strategy. This year's growth is expected to be even worse, at 1.5%, the Joint Standing Committee on Commerce, Industry and Banking predicts.

Insiders at Bangkok's financial institutions say the actual result could end up being only 0.5%, the lowest in a decade.

"What we are seeing now is slow attrition, a hollowing out of the economy for the small people," said Supavud Saicheau, a leading economist and adviser to Kiatnakin Phatra Financial Group, a Bangkok-based business consultancy. "It is economic death by a thousand cuts."

They trace the country's woeful numbers to the five years under the previous military junta -- a bitter pill for the generals who run the pro-military government elected last March. In 2014, the year of the coup, growth slumped to 1% due to the political turmoil. These troubling trends, the bank noted, did not stem from severe local or international financial crises, which had at least partly explained previous increases in poverty in 1998, 2000 and 2008.

Nationwide perceptions of well-being are low across Thailand, compared with its regional peers. "Only 39% of Thais in 2018 felt their standard of living was getting better," the World Bank said in early March. It was "the lowest when compared to other Southeast Asian countries surveyed during a similar period." Poverty is widespread across all 77 Thai provinces, which "signals a reversal in trends from the past," the World Bank report argues. In the 2007-2013 period, "wages, farm incomes and remittances contributed to poverty reduction, but in the period [from] 2015-2017 they became sources of rising poverty."

The dire picture on the ground shreds the rosy image the government painted in 2017. Deputy Prime Minister Somkid Jatusripitak, the junta's economic czar and the current regime's key economic adviser, said that "nobody will be poor in Thailand by 2018."

Billions of baht worth of stimulus packages, subsidies and direct cash as relief measures -- euphemistically referred to as "helicopter money" -- have been rolled out. The junta's flagship welfare program, unveiled in 2017, initially disbursed 40 billion baht to 11 million poor people. That number increased to 14 million in the second year, as the regime geared up for the March 2019 general elections.

But stories of families trapped at the bottom of the economic ladder reveal the limits of the junta's and pro-military government's aid.

The need for more "helicopter money" could swell in Chonburi, a province southeast of Bangkok, where factories are shutting down due to plummeting exports. Thousands in the province have been pushed out of their jobs as a consequence of a strong Thai baht and a shifting global market for Thai manufactured goods. Now, there are long lines of former factory workers at the local offices of the labor department.

Many are turning to loan sharks to help make ends meet, adding to bulging household debts. Last year, the average debt load stood at 552,500 baht, up from 377,100 baht in 2009, according to the Bank of Thailand, the central bank. Total household debt is now equal to nearly 80% of gross domestic product, the second-highest ratio in Asia after South Korea.

"Our debt is over 2 million baht now, and we are struggling to pay back the 15% monthly interest to the loan shark," said Phatthiraphon Nonsiri. She lost her job in December, after the Japanese-owned auto parts factory where she worked shut down. The closure also affected her husband and her parents, all of whom were employed on the factory floor.

The sudden loss of income, the 29-year-old Phatthiraphon said, may condemn them to "live in the dark." They have failed to pay three months of electricity bills, and they fear their power supply will be cut. "We are stuck," she said, shaking her head. 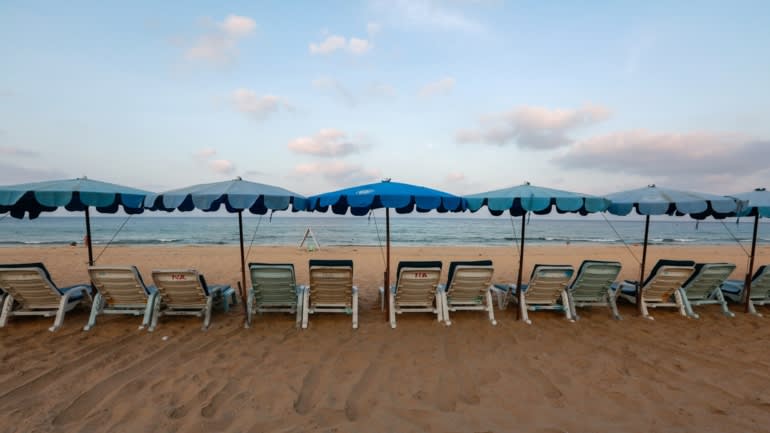 Empty chairs are seen on a Phuket beach -- usually full of tourists -- on March 11.   © Reuters

A similar gloom is descending on Bangkok, including the ubiquitous fashion malls many small and midsize enterprises rely on.

One mall in a northern Bangkok district used to be popular with office workers and students looking for bargains without brand names. Now the upper floors resemble a graveyard of empty stores. Nearly one-third are closed.

"Earlier, when business was good, we earned 200,000 baht a month, but last month sales were down to 75,000 baht," lamented a vendor who sold colorful Hawaiian shirts. "It is hard to stay open, because customers have declined, yet our costs are the same, like monthly rent of 31,400 baht. ... We may close soon."

The plight of Thai SMEs, a driving force for the economy, has not been lost on economists. "SMEs have higher risk, and as a result have more difficulty to get funding from the formal banking sector than large corporates," said Somprawin Manprasert, chief economist at the research division of Bank of Ayudhya.

"The shock from the coronavirus is draining demand, and I am worried, really worried about our economy."

But even before the coronavirus hit the tourism sector, Somprawin's researchers had raised the alarm about farm incomes drying up from the severe drought.

The dry spell began in mid-2019 and shows no signs of abating. If it continues through July, losses from the rice crop are estimated at 37.8 billion baht and 3.3 billion baht for cassava, according to a March 2020 study by the commercial bank. Rubber and sugar farmers are also hurting.

The drought could not have come at a worse time, the NESDC said last month. A parched rural heartland will not be able to reprise its old role as a shock absorber for a weak economy. In the past, rural areas offered work to families who had lost jobs in factories or small businesses and returned to their villages to harvest the fields.

The discontent among Thailand's economically dispossessed is growing. And the parliamentary opposition has seized the moment to accuse the pro-military regime of forsaking the majority in favor of its powerful financial allies, the Sino-Thai oligarchs, whose fortunes have soared after the 2014 putsch.

Mingkwan Saengsuwan, a former commerce minister, drew first blood, arguing that since the coup the total wealth of the richest 1% of Thais was "worth more than the total wealth of the 99% of Thais combined." He was driving home a point made during a no-confidence debate in the legislature in late February: that by 2017, Thailand had topped the list of countries with the worst wealth inequality, up from 11th place just two years earlier.

Financial analysts have taken note of the glaring economic divide and the pampered oligarchs benefiting from sweetheart deals. The junta turned to the oligarchs to help revive the economy after the coup, enticing them into partnerships by dangling carrots -- tax concessions and protection of their monopolies and duopolies. There is growing chatter within some quarters about Thailand becoming "a country owned by a few for a few," as one veteran foreign analyst in Bangkok put it.

Consequently, political risk is rising, he noted. "Yet, we don't know which form it will take, but if history is a guide, Thais don't do things gradually -- they just blow up."