Success in containing the first wave does not guarantee that tackling the second wave will be just as effective. © Illustration by Michael Tsang
Asia Insight

TOKYO -- At a glance, one would never know anything is out of the ordinary at St. Luke's International Hospital in Tokyo.

Receptionists register visitors. The lobby is crowded with patients awaiting examinations. Checkups and surgeries that had been delayed by the COVID-19 pandemic have resumed. But the staff at the hospital -- a stone's throw from the old Tsukiji Fish Market -- are not letting their guard down.

"If a patient has a fever or other cold symptoms, we will immediately switch our response to one for a potential coronavirus case," said Fumie Sakamoto, manager of the hospital's infection control division.

St. Luke's treated the city's first two coronavirus cases and had as many as 40 hospitalized at one point. Sakamoto described the experience as "a tightrope walk." Supplies of masks, gowns, gloves and hand sanitizers are still tight.

The nightmare scenario, she said, would be an outbreak inside St. Luke's that kills vulnerable patients, forces a hospital shutdown and cripples a major downtown area that includes the Ginza shopping district. "Things will not be the same for us as the pre-coronavirus days," Sakamoto said, "even as the rest of the country returns to normal." Commuters in Tokyo on June 26: Google mobility data shows the Japanese capital is stirring back to life. (Photo by Ken Kobayashi)

Across Asia and beyond, many share Sakamoto's fears of new waves of infections as economies restart and governments gingerly reopen borders. Seoul, Beijing and, indeed, Tokyo have seen infection numbers jump soon after relaxing restrictions. Some countries, like Indonesia, are eager to open up even before halting their first wave. In the hard-hit U.S., some states are freezing or reversing their reopenings.

In many ways, the real stress tests are still to come.

"To prevent the [initial] spread of the pandemic, it was not rocket science," said Dmitry Kaminskiy, founder of Deep Knowledge Ventures, a Hong Kong-based investment fund analyzing the global impact of COVID-19. "It was quite an easy task if governments reacted quickly."

Japanese Prime Minister Shinzo Abe took up the challenge when he fully lifted the state of emergency on May 25 and removed a warning against domestic travel on June 19.

Tokyo, which never had a full lockdown, is not quite back to normal. But it is getting there. Google mobility data shows retail and recreation activity was down by 23% on June 23, compared with the baseline median value for the corresponding day of the week from Jan. 3 to Feb. 6. That marks a significant increase from the minus 49% recorded on May 23. 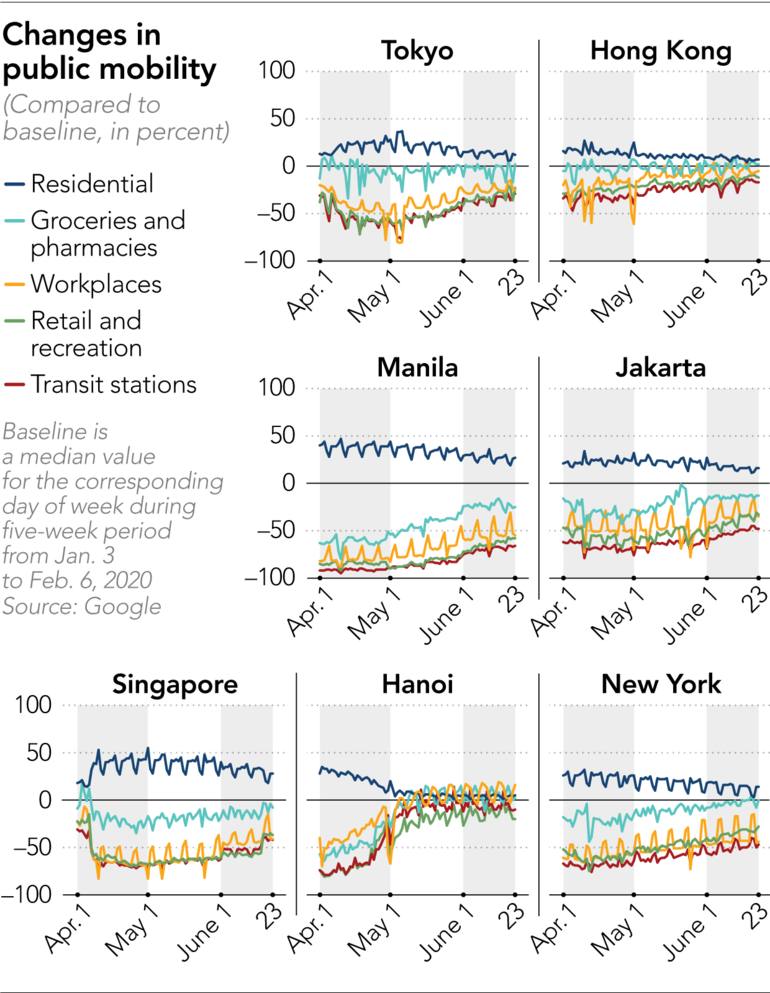 Going by a Deep Knowledge Ventures' latest ranking of coronavirus safety in the Asia-Pacific region, Japan is in a good position. Only Singapore is ranked higher, based on 130 parameters covering factors like risk management, emergency preparedness, geopolitical vulnerability and economic sustainability.

Singapore performed well early in the pandemic, only to struggle with explosive outbreaks within dormitories for migrant workers. The rankings, however, reflect not only how countries and territories have responded so far but how the fund expects they will handle the virus and related threats in the future. DKV's report credits Singapore with a "high degree of emergency preparedness and capacity for rapid mobilization of resources."

Kaminskiy cited Singapore and Japan's combination of technology and economic development, which should help them monitor cases, ensure effective treatment and withstand whatever restrictions might be needed as new waves "inevitably hit different regions sporadically over the next two years, and maybe even longer."

But Abe has another goal: saving the postponed Tokyo Olympics in 2021.

This will depend on quarantine-free travel. For starters, Japan is discussing bilateral corridors with Australia, New Zealand, Thailand and Vietnam -- all of which made it through their first waves with relatively few cases or deaths. By July, the government envisions letting in a total of 250 business travelers from these countries per day, with coronavirus tests administered before departure and upon arrival.

Similar arrangements with mainland China, South Korea and Taiwan could follow in the fall.

Singapore, too, is negotiating with several partners and already has a business "fast lane" with a handful of Chinese cities, including Shanghai and Tianjin. Thailand is considering a resumption of business travel in July, having banned all international flights through June, and is under pressure to resuscitate its tourism industry. Even Indonesia, which trails in 18th place on the Asian safety ranking and is logging around 1,000 infections a day, is weighing how to restart travel to and from China, South Korea, Japan and Australia. Jakarta is desperate to bring back visitors after the virus wiped out millions of jobs.

Eager as countries are, hopes for a quick travel rebound are fading.

Aviation analytics company Cirium predicts demand is unlikely to fully recover until 2023. "Travel bubbles or air bridges are potentially being established in some areas, but are relatively small and on a bilateral basis," said Rob Morris, Cirium's global head of consultancy. "International agreements will be much slower."

The International Air Transport Association wants to do away with quarantines in favor of testing, noting that no travel and tourism means a loss of 10% of global gross domestic product. But managing risks at borders will be difficult.

Some estimates suggest the standard polymerase chain reaction tests catch only 70% of patients who have shown or are about to show clear symptoms, let alone early cases.

Hiroshi Nishiura, a professor specializing in infectious disease modeling at Japan's Hokkaido University, calculates there is a 99% chance of a massive outbreak within 90 days if 10 infected visitors were to enter Japan daily. "An outbreak cannot be prevented through a quarantine alone," he said. "The number of entrants needs to be reduced as well." 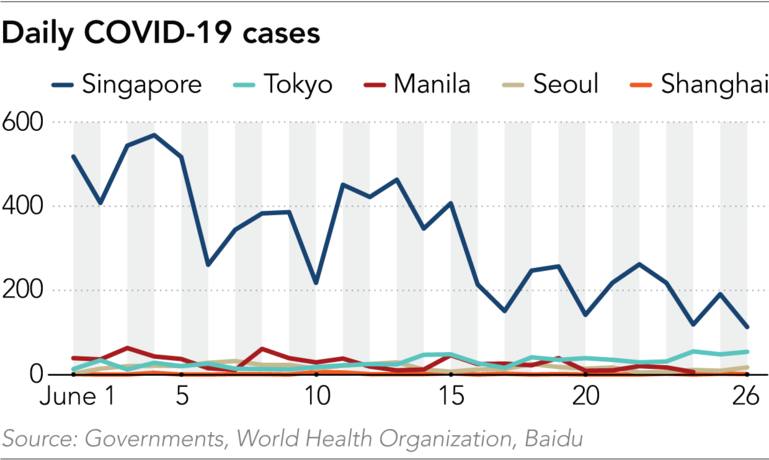 The danger of new outbreaks has become clear with most travel curbs still in place.

Beijing, after nearly two months without a single COVID-19 case, has reported 311 since June 11, according to Reuters. Tokyo's daily confirmed cases reached 58 on Monday, exceeding 50 for four consecutive days. South Korea -- hailed for its aggressive testing campaign that helped snuff out its first wave -- reported 62 new cases within 24 hours over the weekend.

Kaminskiy said that as economies open wider, three elements will be important: sophisticated border controls, strong monitoring and detection, and the capacity to quickly enforce local quarantines. He noted that China, ranked third on the Asia-Pacific safety list, displayed just such capabilities this month.

Chinese authorities reportedly tested 2.3 million people in about a week, canceled most domestic flights in and out of Beijing, and banned residents of medium- and high-risk neighborhoods from leaving the city.

Testing, or lack thereof, has been a controversial issue in Japan all along. Whether it was due to shortages of equipment and personnel, or by design to avoid overwhelming the medical system, some criticized Japanese officials' restrained approach.

Japan's testing capacity has surged 7.5-fold in four months, however, thanks to the enlistment of private hospitals and the advent of easier and faster PCR tests using saliva. Daily capacity stands at about 30,000. Coronavirus testing in Beijing on June 21: The authorities reportedly screened 2.3 million people in about a week.   © Kyodo

Tokyo Gov. Yuriko Koike has argued that the recent uptick in cases "is not a second wave." More screening may partly explain the numbers: The city's testing in June peaked at over 2,000 in a day, up from May's high of about 1,500, after a government policy change to allow anyone who had close contact with a coronavirus patient to be checked. Previously, tests were only administered if individuals showed symptoms.

Some Japanese business groups say the country should prepare 200,000 tests a day. Keiichiro Kobayashi, an economist and research director at the Tokyo Foundation for Policy Research, estimated that would cost about $200 billion but stressed that is a bargain compared with an economic shutdown.

And Japan introduced a smartphone app on June 19. The software -- called COVID-19 Contact Confirming Application in English -- uses Bluetooth to record instances when a user is within 1 meter of another for at least 15 minutes. If a user tests positive for COVID-19 and tells the app, it combs through two weeks of data and notifies anyone who might be at risk.

As of Monday afternoon, Japan's app had been downloaded 4.72 million times. That sounds like a lot, until you consider it amounts to around 4% of the nation's population. Experts say a ratio of around 60% is needed for it to be effective. 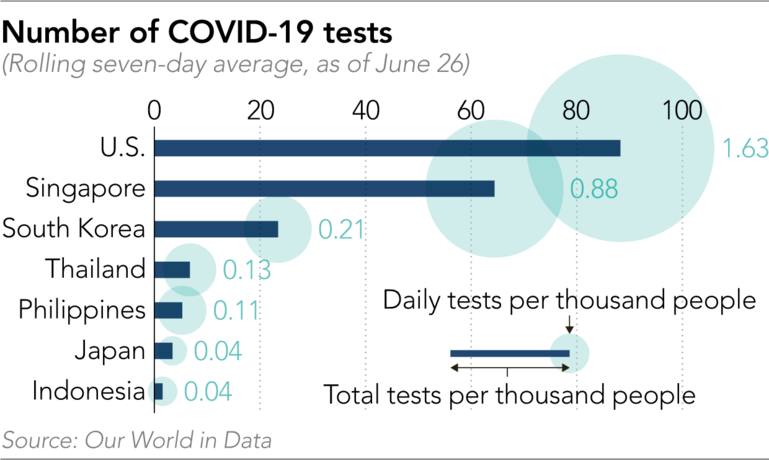 A further limitation is that all data is stored locally, with nothing tied to names or phone numbers. "It won't be too effective" in tracing transmission routes or clusters, said Hideo Maeda, director of a public health center in Tokyo.

Kaminskiy's list shows many of Asia's less-developed countries in precarious positions. The region has "significant disproportions," he said. It has "very advanced countries with digital infrastructure, artificial intelligence, very good resources. Other countries, developing countries, have underdeveloped infrastructure, a very big population, and it's not clear at all what will happen if they are unable to prevent a second wave."

He warned that some countries that have performed well, like Vietnam, could still struggle to cope with the challenges ahead.

No nation can afford to rest on its laurels. 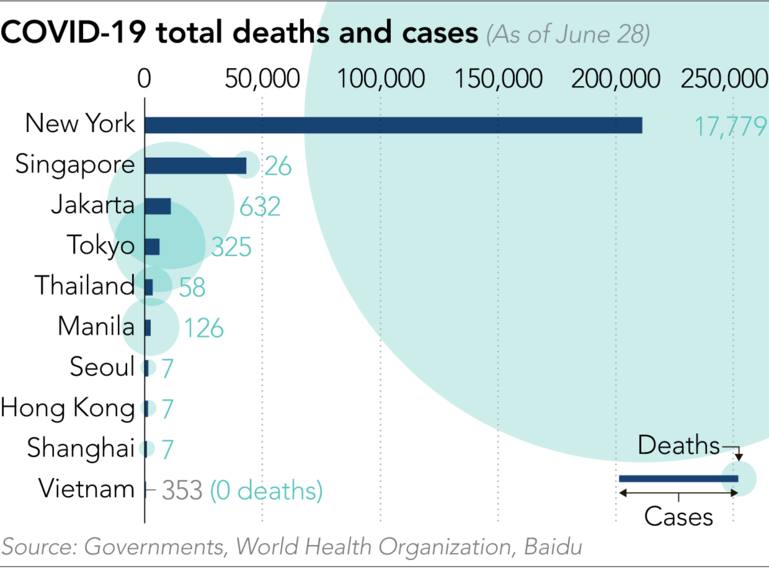 In Japan testing suggests that only 0.1% of Tokyo's population has COVID-19 antibodies, or potential immunity. Maeda said natural "herd immunity" is a long shot and that the best hope is vaccination, which remains unavailable.

Without much immunity, "if the virus enters and comes into contact with people, transmission is bound to happen at a certain rate," said Sakamoto at St. Luke's. The key will be keeping that rate manageable.

"Just because we contained the last outbreak doesn't mean we will be able to contain the next wave," Sakamoto stressed. "It all depends on the scale of the outbreak."

Update: This story has been amended to elaborate on Deep Knowledge Ventures' methodology.