HONG KONG/TAIPEI -- For 30 years, Hong Kong has kept the flame of mourning alive for the protesters killed in central Beijing in 1989. Even after the 1997 handover of sovereignty to China, which has gone to great lengths to expunge the military suppression from history, the city continued to hold candlelight vigils to mark the anniversary of the Tiananmen crackdown every June 4.

This year, the memorial is scheduled to go ahead as usual in Victoria Park. But Hong Kong is rapidly losing its status as an enclave for promoting democracy and human rights -- and the world is beginning to reckon with its failure to hold Beijing accountable three decades ago.

In mid-May, a three-day international symposium for the 30th Tiananmen anniversary opened in Taipei. It was the sort of gathering that once would have been held in Hong Kong by default. But Joseph Cheng Yu-shek, former chair professor at the Chinese University of Hong Kong and the de facto organizer, said Taiwan was chosen "for the obvious reason of the situation in Hong Kong."

There was a real risk that participants would be turned away at the Hong Kong border, even though the territory is guaranteed a "high degree of autonomy" until at least 2047 under the "one country, two systems" framework devised by China and the U.K. Sure enough, on June 2, Hong Kong immigration denied the entry of Feng Congde, a Tiananmen student leader and a panelist at the Taipei symposium. Protesters fill Beijing's Tiananmen Square in 1989, before the military moved in.   © Kyodo

A bigger threat to Hong Kong's position as a flag-bearer of Chinese freedom comes in the form of extradition legislation.

An amendment pending in the Legislative Council would make it possible to deport individuals to places that do not have formal extradition treaties with Hong Kong -- mainland China included. Local activists, business groups and foreign government officials, including U.S. Secretary of State Mike Pompeo, have all voiced concerns.

In an open letter to the Hong Kong government, Amnesty International, Hong Kong Human Rights Monitor and Human Rights Watch argued that the change "would remove existing safeguards from the process of extradition, allowing people to be sent to jurisdictions, notably mainland China, where they are at risk of torture or other ill-treatment, and unfair trials."

Hong Kong's autonomy did not stop Chinese Vice Premier Han Zheng, one of the top seven members of the powerful Communist Party Politburo Standing Committee, from weighing in on May 21. "The central government completely supports the amendment process," he was quoted as saying by the government mouthpiece Xinhua.

"Are you saying that the way we handled June 4 was wrong?"

With the backing of the top leadership, Hong Kong's pro-Beijing government is looking to bulldoze the amendment through, perhaps with minor changes. Democrats, meanwhile, are calling for another anti-extradition rally on June 9, following one on April 23 that brought 130,000 people into the streets in the largest demonstration since the Umbrella Movement of 2014.

"It is regrettable that we are not able to hold events in Hong Kong like in the past," lamented Tseng Chien-yuan, chairman of the New School for Democracy in Taipei, which co-sponsored the Tiananmen symposium. Ironically, he noted, Taiwan was not a democracy at the time of the crackdown in Beijing, but now "everyone could say whatever they want in Taiwan." Protesters march in Hong Kong on May 26, calling on China to acknowledge what really happened in 1989 and adopt democracy. (Photo by Ken Kobayashi)

The island has become a refuge for Lam Wing-kee, a Hong Kong bookseller kidnapped by Chinese agents in 2015. Cases like Lam's illustrated the danger in Hong Kong, as did the alleged abduction of Chinese billionaire Xiao Jianhua from the city's Four Seasons Hotel by Beijing's agents in January 2017.

Taiwan, however, is not immune to Chinese pressure. Xi on Jan. 2 renewed a call for unification under the one country, two systems formula. Chinese fighter planes recently breached the median line in the Taiwan Strait. And Wang Yang, No. 4 on the mainland leadership hierarchy, recently told Beijing-friendly Taiwanese media leaders that he doubts the U.S. would go to war with China over Taiwan, and would not be able to defend the island if it did. "You could say that timing and momentum are on our side," he said.

Jose Luis Martin Gascon, chairman of the Commission on Human Rights of the Philippines -- where democratically elected President Rodrigo Duterte has sought close ties with China and shown his own autocratic tendencies -- fears creeping Chinese-style authoritarianism far beyond China. "If we don't challenge [such governments] now, perhaps tomorrow or the next day or next year, maybe it becomes too late," he said. "Democracy will just be a memory." "China today presents not just a threat to and a suppression of freedom and individual dignity of 1.3 billion in China, but freedom and access to information of billions of people around the world," said Larry Diamond, senior fellow at Stanford University's Hoover Institution. "We cannot separate all that they are doing internally in China from what they are doing [on the] international stage."

He points to cases like an Australian lawmaker being influenced to support Beijing's stance in the South China Sea, amid increasing control of Chinese-language media globally to "eclipse and silence alternative points of view, anything that would question China."

The global community has "created a monster"

"Even there was a massacre," Wang said, "they still kept hope on that regime." Chinese dissident Wang Dan, a former Tiananmen student leader, speaks to reporters in Tokyo on May 29. Soon after the crackdown in 1989, he was listed as No. 1 on the government's most-wanted list and imprisoned. (Photo by Kenji Kawase)

Now, as far as Beijing is concerned, it has "already reached a final verdict" on what it euphemistically calls the "political wind wave and a related problem at the end of the 1980s." Wei Fenghe, China's defense minister, answered the Tiananmen question this way at the Shangri-la Dialogue in Singapore on Sunday: "Are you saying that the way we handled June 4 was wrong?"

Some argue the 1989 crackdown, and the pursuit of a "socialist market economy" while crushing dissent, actually made China more attractive to global partners.

Qin Hui, a former professor at Tsinghua University, has long attributed China's economic growth to a "low human rights advantage." Oppression allowed high competitiveness thanks to lower wages and welfare. Crony capitalists profited from forced evictions for property developments and a disregard of environmental consequences. This, plus the world's largest population, inevitably lured foreign capital, allowing the regime to not only survive but thrive.

Teng Biao, who was held in an "enforced disappearance" after the so-called Jasmine Revolution protests in China in 2011, said the post-Tiananmen economic miracle has produced "totalitarianism that is not comparable to any totalitarianism in the past, utilizing the most advanced technology."

The human rights lawyer, now in exile, says the confluence of big data, artificial intelligence, surveillance and the social credit system -- a national program for scoring each citizen's reputation -- has "greatly enhanced the ability to control society." China already has 70% of the world's surveillance cameras and is expected to have 2.76 billion installed by 2022, according to IDC. 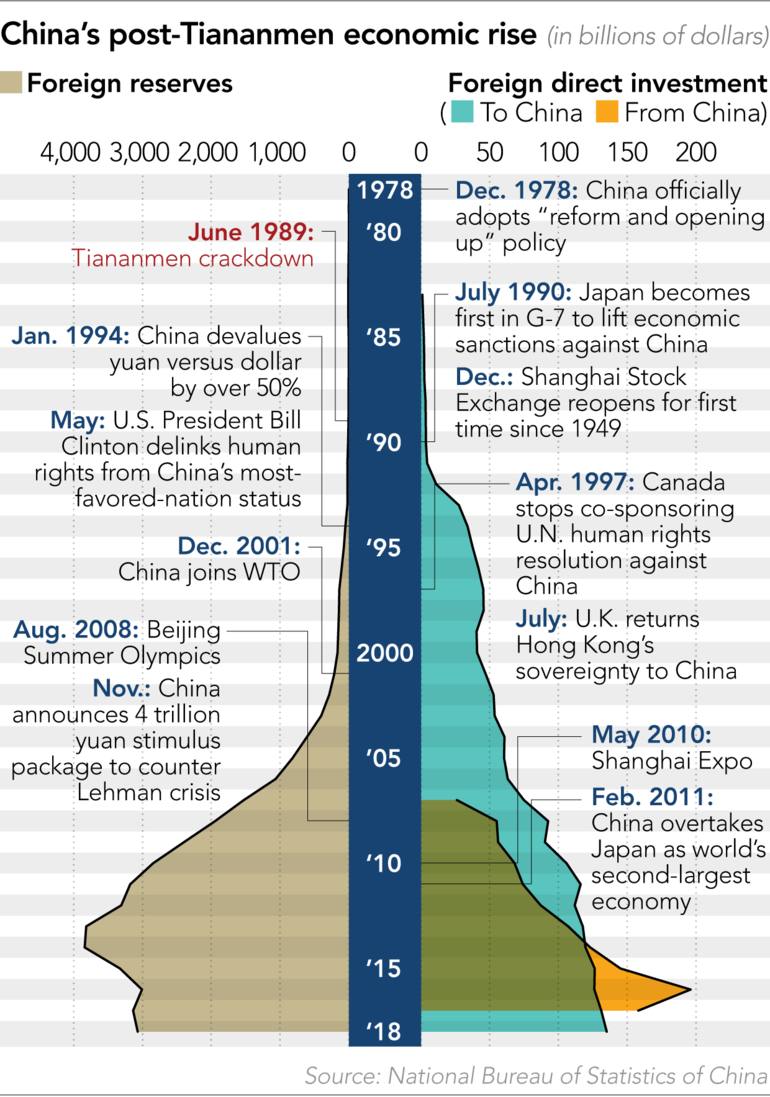 Wang said the global community has "already created a monster."

"I admit that we were naive about the Communist Party 30 years ago," Wang said of the student leaders. "But wasn't the whole world naive about China?"

That may be changing.

Diamond believes one reason Australia's ruling Liberal-National coalition pulled off a shocking election victory on May 18 was that "society has become awakened to the looming dark shadow of China's aspiration for hegemony in the region."

China takes in 30% of Australian exports, the most of any trading partner, while serving as Australia's biggest source of foreign direct investment. The relationship is a big driver behind Australia's 27-year streak of unbroken economic expansion. Simply put, Australia needs China.

But Canberra has also shown alarm over Chinese influence.

It has banned political donations by foreign nationals and corporations, while requiring individuals working for overseas organizations to register. In February, Canberra rescinded the permanent residency of Huang Xiangmo, a Chinese property developer and lavish political donor, and barred him from re-entering the country.

All this followed the resignation of Labor Senator Sam Dastyari in 2018 amid a swirl of questions over his support of Beijing's South China Sea policy and his murky dealings with Chinese businesses. Diamond thinks the perception that Labor would be softer on China hurt the party at the polls.

The U.S., where the trade and tech wars dominate the headlines, is also rooting out Chinese influence.

The U.S. government has zeroed in on Beijing-funded Confucius Institutes, which teach Mandarin and Chinese culture on hundreds of college campuses worldwide. China says they are friendly educational programs, but Washington sees them as propaganda outfits. Now, colleges that want to continue receiving Pentagon subsidies for language instruction must abolish the institutes.

Twenty-one U.S. schools have closed them, 16 since last year, according to In the name of Confucius. Globally, 34 universities have cut ties with them.

A court case in April heightened the U.S. sense of urgency. Ying Lin, a former Air China manager and naturalized American citizen, pleaded guilty in New York to working as an agent for China's military. She stood accused of abusing her position by accepting packages from military officers and sending them on flights as unaccompanied luggage or checked under passengers' names.

"This case is a stark example of the Chinese government using the employees of Chinese companies doing business here to engage in illegal activity," said Assistant Attorney General John Demers.

But are governments willing to stick their necks out over China's treatment of its own people?

Germany, in a clear acknowledgment of waning freedom in Hong Kong, in May 2018 granted asylum to two young pro-independence activists who had been charged for taking part in violent unrest but skipped bail, Reuters reported late last month. The news earned the German acting consul general in Hong Kong a rebuke from Chief Executive Carrie Lam Cheng Yuet-ngor.

Wuerkaixi, an ethnic Uighur and former Tiananmen student leader now in exile in Taiwan, argues the world must stand up for human rights.

Anywhere from 800,000 to over 2 million Uighurs, ethnic Kazakhs and other Muslims have been rounded up in China's Xinjiang, according to a U.S. State Department report. Wuerkaixi wants to see enforcement of existing U.S. laws like the Magnitsky Act, which allows for freezing assets of foreign officials responsible for abuses and denying them visas. "When China becomes a clear and present danger, it is the responsibility of the whole global community to act," he said.

"After 30 years, the whole world is learning who the Chinese Communist Party really is."