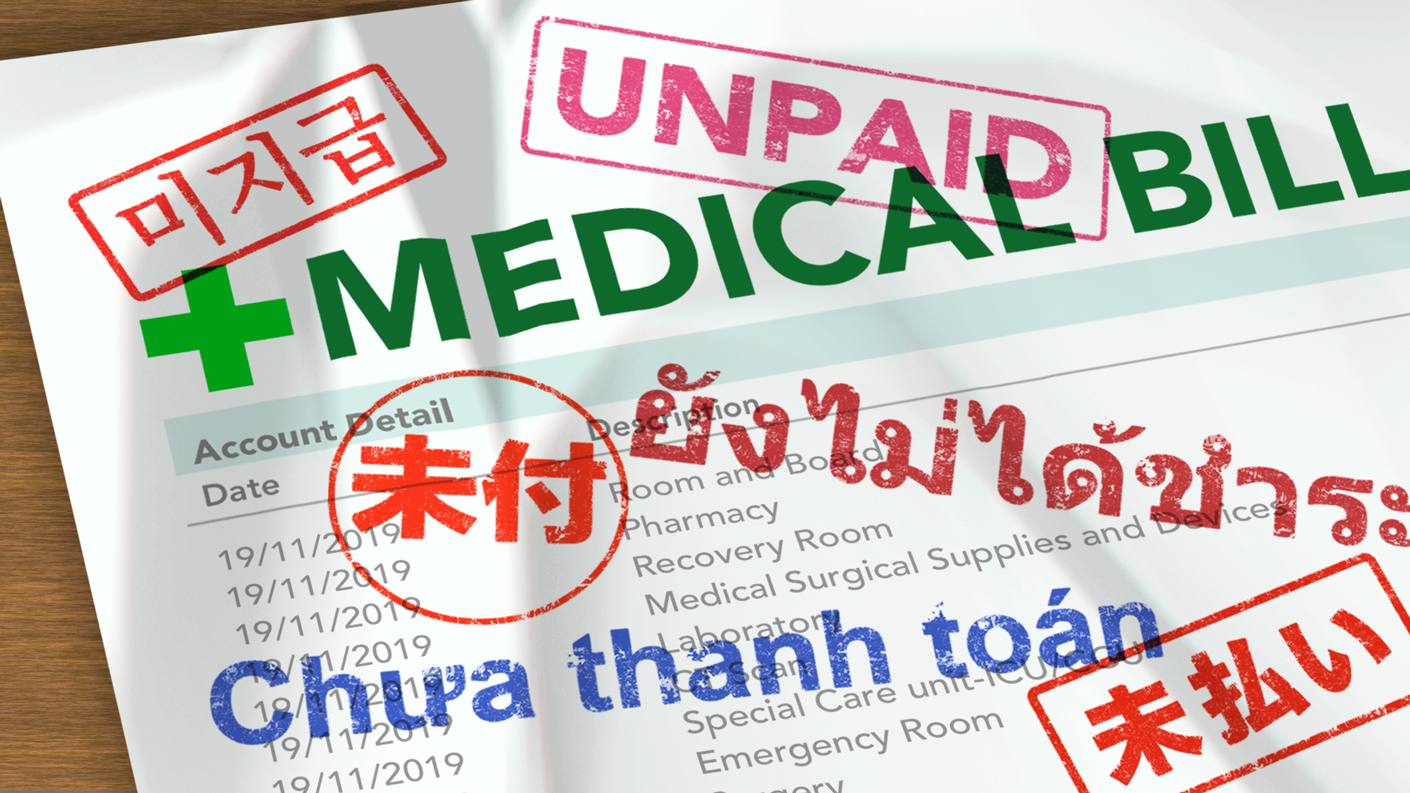 PHUKET, Thailand/TOKYO -- The tourism high season has begun on southern Thailand's resort island of Phuket. For the head of the island's biggest hospital, the coming months will be anything but a vacation.

Every year, Vachira Phuket Hospital accepts thousands of foreign patients -- many of them during the dry months from November to March, when millions of holidaymakers come for the blissful beaches, historic old town and wild nightlife.

Some fall ill. Some come in with injuries sustained during water sports or while scooting around on rented motorbikes. Others arrive with dog, monkey or snake bites. Quite a few leave without paying their bills.

"The situation is getting worse," Chalermpong Sukontapol, the hospital's director, said with a sigh. "There is no hope for me."

He is not alone. Unpaid medical bills are piling up across Thailand as the country strives to boost its economy through tourism. Policymakers in Japan and other popular Asian destinations are wrestling with the same problem, on top of challenges like aging populations. Chalermpong recalled one recent case in which a young American suffered a serious head injury in a motorcycle accident. He stayed in intensive care at first, and then a regular room for a few months. He did not have travel insurance, and by the time he was discharged, he owed the hospital 800,000 baht ($26,400).

The hospital is still waiting for the money.

Collecting unpaid bills is difficult, especially after patients leave. "We try everything," Chalermpong said -- from visiting patients' friends in Thailand to asking their embassies to track them down. The efforts are almost always in vain.

Nevertheless, Chalermpong said, "We cannot deny accepting foreign patients because of the doctor ethic. We are a government hospital. Doctors and staff treat foreign patients the same way we do Thai people."

Sarayut Ramarn, a nurse responsible for international customer service at Vachira, was blunt. "The quantity of tourists is rising, but the quality of tourists is falling. They prepare money for hotel, food and partying. But they are not prepared for an illness or accident."

Vachira accepted about 9,000 foreign travelers in the fiscal year through September 2018. They hailed from countries as diverse as Russia, China and France, and nearly 50% of their bills were left unsettled. Overall, more than 14 million foreign visitors descended on Phuket in 2018. Thailand as a whole welcomed 38 million -- more than double the figure for 2010. The Public Health Ministry said unpaid bills at hospitals across the nation came to 448 million baht in a year through September 2019.

Akom Praditsuwan, deputy director-general of the ministry's Department of Health Service Support, told the Nikkei Asian Review that even patients who leave contact information are rarely found since they often give fake details.

Japan's tourist arrivals have grown even faster than Thailand's, tripling to 31 million in 2018, compared with 2010. The government wants to raise the number to 60 million by 2030. But hospitals are already feeling the effects of the influx.

At Tokyo's National Center for Global Health and Medicine, at least three foreign nationals have been unable to pay their bills in full since April. One was charged over 10 million yen ($91,630). Another disappeared after undergoing more than 1 million yen worth of treatment.

"There have been more foreign patients in recent years," said Yasuo Sugiura, director of the hospital's International Health Care Center. Currently, 13% of all outpatients are foreign nationals. "Troubles occur mainly because some visitors do not have travelers' insurance or their insurance coverage is not enough to compensate for the actual medical expenses," he said.

Japanese law prohibits doctors from refusing to provide medical services. Hundreds of hospitals have been burned. A survey by the Ministry of Health, Labor and Welfare last year found 18% of 2,174 hospitals that had accepted foreign nationals reported bills being left unpaid for a month or more. The average amount was 433,000 yen ($3,968) per hospital. The government is encouraging tourists to buy insurance, but 27% of visitors to Japan come without coverage, the Japan Tourism Agency found this year.

Hospitals are beginning to insure themselves against the uninsured.

Tokyo-based Aioi Nissay Dowa Insurance Co. in April launched a program that compensates hospitals for foreign patients' unpaid bills. Over 10 hospitals have signed up, according to the company. "Hospitals appreciate the insurance because it reduces their burden of collecting money from the patients," a spokesperson for the insurer said.

Thailand, Japan and other Asian countries with aging populations can ill afford more pressure on their already overstretched medical systems. Governments are beginning to take action, starting with insisting on insurance for foreign nationals who stay for long periods.

As of Oct. 31, foreigners residing in Thailand on one-year visas -- mainly retirees -- must have their own insurance.

When it comes to short-term visitors, however, policymakers have been slow to react. 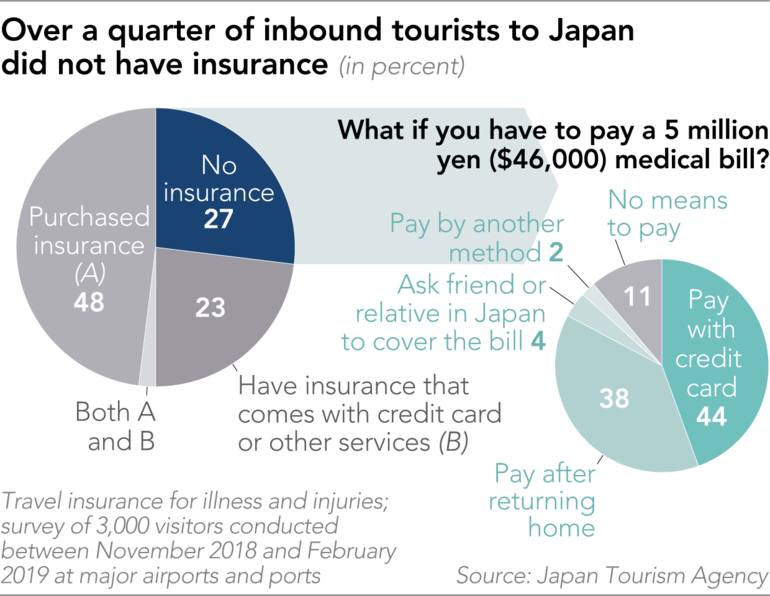 Thai government agencies have considered requiring all visitors to buy insurance before entering the country. But private tourism organizations worry this would hurt the travel industry, which generates up to 20% of gross domestic product.

Chalermpong said Vachira Phuket Hospital proposed a different solution: collecting $1 from every tourist who enters Phuket and using the money to pay off unpaid expenses. He said policymakers balked at this over concerns about who would make decisions on who gets the money.

There are no easy answers, according to Eugene Tan, an associate professor of law at Singapore Management University. "Most governments would be wary of implementing a re-entry ban to those who fail to pay their medical bills, as enforcement is a challenge. Similarly, imposing mandatory insurance for all visitors will not make a country attractive to tourists."

Tan suggested it might be possible to create an insurance program from tourism receipts to reimburse medical institutions. But even then, he said, "the question is whether the cost of managing the scheme is sustainable."

Michael Chiam, a tourism lecturer at Singapore's Ngee Ann Polytechnic, advises hospitals to be transparent about costs and said that if foreign patients are paying on their own, the hospitals have to decide "what is the best treatment based on affordability." 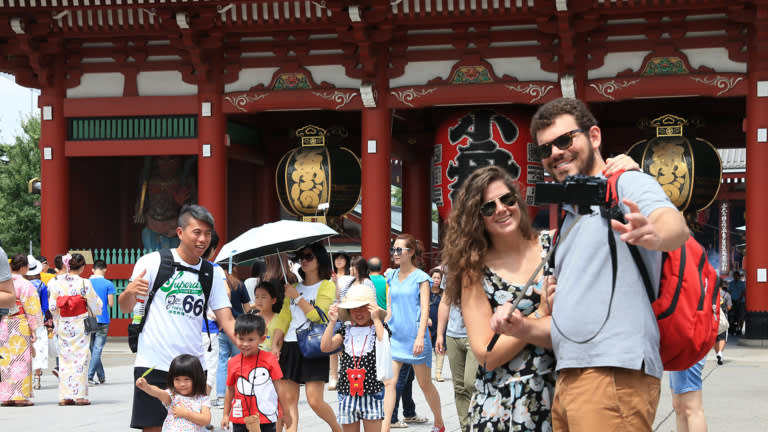 Tourists take a selfie in front of Tokyo's Sensoji Temple. The rise in foreign visitors has prompted some Japanese hospitals to take out insurance against uninsured patients.

The first priority, obviously, is to save lives. But in some cases there may still be ways to rein in expenses. "What's best for a patient differs depending on the individual," said Yuko Shikano, medical coordinator for international patients at NTT Medical Center Tokyo.

Shikano shared an episode from two years ago, when a Filipino tourist in his 50s was rushed to the hospital after suffering a brain hemorrhage. He needed an immediate operation, followed by intensive care and rehabilitation. All this would entail two months of hospitalization and a bill of nearly 7 million yen.

The man had insurance, but not nearly enough coverage. After his wife urged the hospital to keep the costs down, the hospital came up with a plan to get him home as soon as possible, limiting expensive CT scans and cutting rehab services. One month later, the man was able to fly back to the Philippines, and in two months he had paid off all of the expenses.

"It's crucial to gain consent about treatment plans and the costs," Shikano said. "Hospitals that inform foreign patients about costs in advance are more likely to avoid payment troubles afterward."

Serina Okamura, associate professor at Japan's International University of Health and Welfare, agrees. "Having informed consent on price is crucial," she said. "A lack of communication can lead to payment troubles."

Okamura argues local governments, hospitals and the tourism industry should work together to reduce the burden, while still attracting visitors.

Back in Phuket, 66-year-old New Zealander Tony Smith, who traveled to the island in November with insurance, said the tourism industry should be more proactive about warning people of the risks of going without coverage.

But Smith thinks the buck stops with travelers themselves. "Firstly, it is your responsibility."