Siblings who arrived from Afghanistan with their families are seen in Pakistan on Sept. 1. Thousands, if not millions, of people are expected to attempt to escape Afghanistan, leaving nations in the region anxious about a flood of refugees coming in.    © Reuters
Asia Insight

ISTANBUL/TEHRAN/DUBAI/NEW DELHI/KARACHI -- The Taliban's takeover of Afghanistan has triggered tough measures from countries in the region and beyond to stem an expected refugee inflow.

Governments from Islamabad to Ankara and Tehran have bolstered border restrictions in anticipation of hundreds of thousands of people fleeing the new regime in Kabul.

Those actions and similar curbs signaled by Western countries have highlighted an emerging tension between claims of international sympathy for Afghan refugees and the reality on the ground. Governments are worried that refugees could start to pour out and exacerbate political and social problems created by previous influxes.

Caught in the middle of this conundrum are Afghans who have escaped to Iran, in the hope of bringing their family over the border and possibly further afield.

Aziz, who came to Iran over a decade ago, is afraid for the safety of his family in Afghanistan and is unsure if they will be able get safely over the border to join him. "The Taliban kill civilians, rob them and take their properties by force," the man, who has become a citizen in Iran, told Nikkei Asia. "No one will be safe."

Abdollah, a university educated textile worker, paid a human trafficker on the Afghan-Pakistan border to get into Iran. He wants to reach Turkey, get asylum and then ask for it for his wife and three children in the Afghan city of Herat. Afghan refugees rest in tents at a makeshift shelter camp in Chaman, a Pakistani town at the border with Afghanistan, on Aug. 31.   © AFP/Jiji

Aziz and Abdollah are kind of people that governments in the region appear keen to keep out. One of the most fretful countries is Turkey, despite it being separated from Afghanistan by Iran and a long, perilous 2,000-kilometer journey. Turkey already hosts more than four million refugees -- 3.6 million from the war in its neighbor Syria -- and doesn't want to receive any more.

Ankara is fortifying a three-meter-high wall along part of its 560-km border with Iran that it started building in 2017. The plan is to extend the barrier from around 155 kms to 242 kms, and supplement it with deep ditches, razor wires, thermal cameras and additional troops -- the Turks have wall-building experience, having completed 837 km of a 911 km one on its Syria border.

Turkey is "facing an increasingly intensifying Afghan migration wave coming via Iran," President Recep Tayyip Erdogan said on Aug. 15, the day the Taliban captured Kabul. The rapid seizure came two weeks before the complete withdrawal of U.S. troops from the war-torn country they had been stationed in for nearly 20 years. 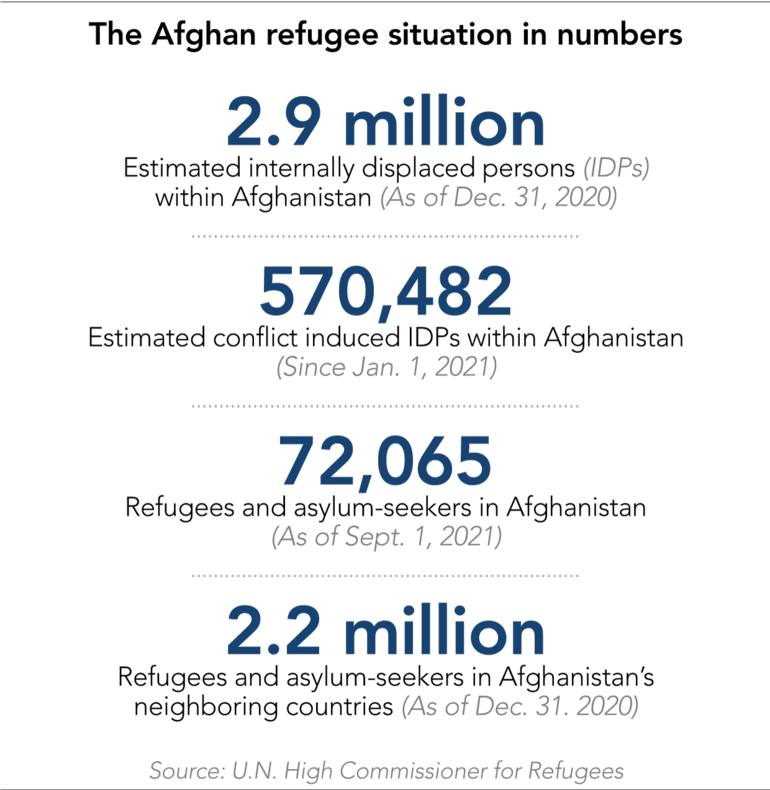 Turkey isn't the only nation in the neighborhood trying to avoid refugee inflows. Iran has closed its border with Afghanistan and returned refugees, according to a Tehran newspaper. Pakistan's army claims to have sealed all irregular crossings from Afghanistan, though domestic media have reported increased human trafficking across the border.

Reluctance or refusal to allow in large numbers of refugees is widespread. In some cases -- Turkey again a prime example -- allowing such an inflow can create a serious domestic political backlash. And with economies battered by COVID-19, additional refugees are an extra burden they and relief agencies can't sustainably afford.

Unless the Taliban decides to try to stop all Afghans from leaving, the end of the U.S. involvement in Afghanistan is going to create more refugees from a country that already produced millions when it was occupied by the Soviet Union in the 1980s. Any new trickle or flood of refugees will include people who couldn't get on U.S. or other evacuation flights from Kabul, people who fear for their lives, and others desperate because of economic hardships. The UNHCR has predicted up to 500,000 Afghans could flee this year, leading him to call for borders to remain open and for more countries to share "this humanitarian responsibility" for helping refugees. Iran and Pakistan already host a combined 2.2 million registered Afghans. Iran in particular, Grandi declared, needs help because of the "critical situation" it faces with the pandemic.

According to a Tehran media report that couldn't be officially confirmed, Iran has made a deal for closing its border with Sunni-majority Afghanistan in exchange for a Taliban promise not to kill any of the country's Shias, a minority who follow the same branch of Islam as nearly all of Iran's population. Even with the closure, there could be a continuing trickle or flow into Iran of Afghans who hope to somehow get into Turkey and apply there for asylum in Europe.

Pakistan, too, will likely end up more with refugees, despite rebuffing U.S. requests to host more. Islamabad -- seen as close to the Taliban -- cites an inability to pay for the upkeep of more refugees on top of the millions.

Yet thousands of Afghans -- including those with or without visas -- are reportedly crossing the border. According to a source in Pakistan's border authority, about 8,000 Afghans crossed into Pakistan on Sunday alone through the Chaman crossing, where Afghans with a visa or a national identity card, or those previously registered with the Pakistani government as refugees, are allowed to cross. Some countries in the region with interests in Afghanistan have offered limited, and short-term, help. The United Arab Emirates has agreed to temporarily host 5,000 evacuated nationals who will go to third countries, following a request from the U.S. The UAE, along with Qatar and Saudi Arabia, have called for peace and political stability in Afghanistan.

Another country that's been involved in rebuilding Afghanistan over the past two decades is India, which hosts more than 15,000 Afghan refugees from long ago. As of March 2021, a total of 41,315 refugees and asylum-seekers were registered with the UNHCR India, with Afghans making up the second-largest subgroup, at 37%, behind those from Myanmar, at 54%.

New Delhi has said it would help Afghanistan's minority Hindu and Sikh community members to come to India, and stand by a number of other Afghans "who have been our partners in the promotion of our mutual developmental, educational and people-to-people endeavors," the Ministry of External Affairs said in an August 16 statement.

On the issue of India prioritizing repatriation into India of Hindus and Sikhs from Afghanistan, Pankaj Jha, a professor of strategic affairs at the O.P. Jindal Global University, told Nikkei that there are some "inherent problems" when it comes to New Delhi accepting Afghan refugees. "Most of them are using India just to try and seek asylum in the U.S. or other countries in the West," he said, adding that refugees themselves are not keen to stay in the country for long. 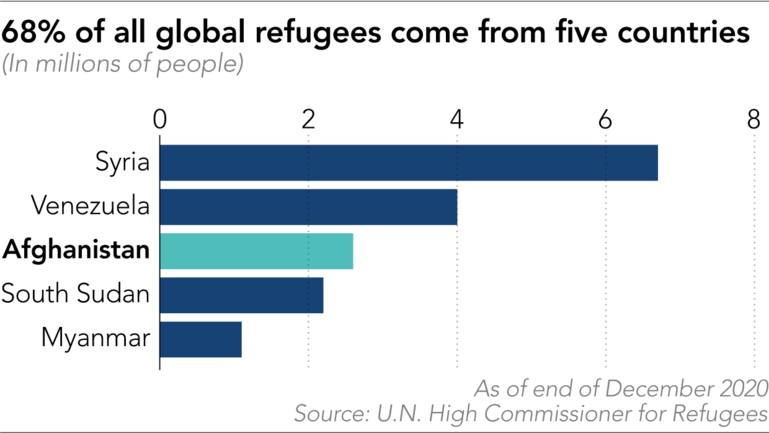 Naturally there are concerns that the refugees' temporary stays could become quasi-permanent if other countries don't offer them a new home and they can't go back to Afghanistan. The close to 4 million Syrians in Turkey, some who had hoped it would be a springboard into the European Union, are an example of refugees with nowhere to go.

European leaders are wary of refugees ending up in the continent like in 2015, when more than a million mostly Syrians, entered from Turkey. That pushed the EU to cut a six billion euro ($7.1 billion) deal with Turkey for restricting the irregular migrant flow to Europe.

While saying the European Union cannot abandon people in immediate danger in Afghanistan, interior ministers said in a statement last week that the 27-nations in the bloc "stand determined to act jointly to prevent the recurrence of uncontrolled large-scale illegal migration movements faced in the past, by preparing a coordinated and orderly response."

In Turkey, the refugee issue is putting pressure on Erdogan owing to increasing anti-immigration sentiment amid a COVID-19-induced downturn in the economy -- inflation is nearly 20% and the broad-defined unemployment rate is 22%. The chairman of the main opposition Republican People's Party, Kemal Kilicdaroglu, has pledged to "solve the refugee problem in two years" should it gain power.

Presidential and parliamentary elections are due in June 2023, and recent polls show record-low approval ratings for Erdogan and his party.

"It is a very difficult mix right now for government," given the pandemic, an economic slump and the refugee crisis, Metin Corabatir, chairman of Ankara-based Research Centre on Asylum and Migration, told Nikkei Asia. Turkish President Recep Tayyip Erdogan speaks in Rize, Turkey on Sept. 4. Ankara is fortifying a three-meter-high wall along its 560-km border with Iran in an attempt to prevent refugees crossing over.   © Getty Images

Turkey has blocked the entry of 1.25 million illegal immigrants over the past three years, Interior Minister Suleyman Soylu told Al Jazeera Mubasher channel on Aug. 25. Since 2016, Ankara has caught 400,000 Afghans and 151,000 of them have been returned to their country by air, Soylu said. He added that 80,000 received international protection and stayed in Turkey, another 20,000 got a residency permit, and claimed the rest went abroad illegally.

Erdogan has repeatedly said Turkey is only hosting 300,000 Afghans, including unrecorded ones, contrary to the opposition party's estimate of up to 1.5 million.

Asked if Ankara and the EU could make a deal on Afghan refugees like the 2015 one on Syrians, Turkish Foreign Minister Mevlut Cavusoglu told Nikkei on Aug. 19: "This is a common challenge we need to work on together."

"Just asking Turkey to do something will not solve the problem," he said. "Turkey cannot shoulder a new wave of refugees." The same day, Erdogan told a TV channel that Turkey has "no duty, responsibility or obligation to be Europe's refugee warehouse."