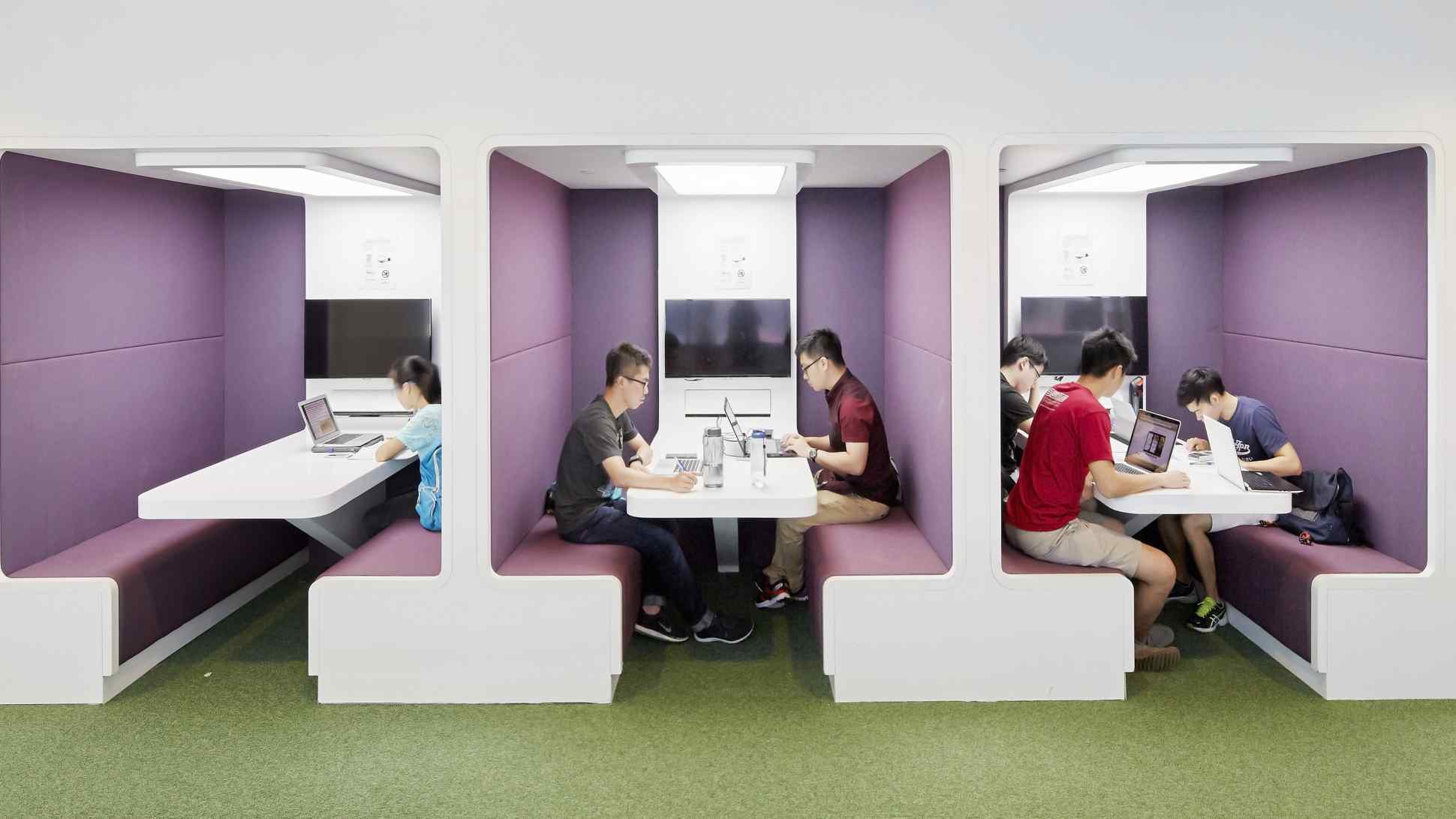 Southeast Asian students who are reluctant to move far from home have a growing range of options within the region, such as the Singapore University of Technology and Design.   © Getty Images
Asia Insight

TOKYO -- For ambitious young Asians, studying in the U.S. has long been a natural choice. They venture across the vast Pacific to pursue degrees with global cachet and, perhaps, take a shot at the American dream.

Increasingly, though, the region's students are making a radical decision: They are staying close to home.

To understand why, start with the latest World University Rankings from Times Higher Education. Three Asian schools made the top 30 for the first time, along with several more in the top 100. More Asian colleges are offering internationally recognized degree programs, often in English, at more affordable rates than schools across the Anglosphere.

This widens the options for students who yearn to study overseas but have limited means or are reluctant to travel far from their families. To some, it also means they can avoid the political maelstrom of Donald Trump's America. Frequent gun violence and the president's anti-immigration stance are two common reasons for steering clear of U.S. shores.

"Students have numerous alternative study-abroad destinations beyond the U.S. and U.K.," said Stephanie Kim, assistant professor of education at Georgetown University. "The trend simply points to the diversification of mobility flows and the rise of new higher education hubs." 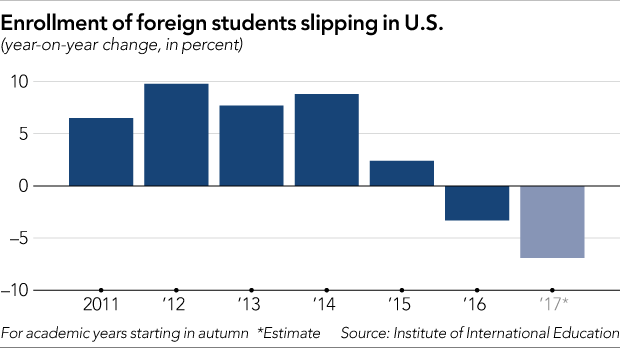 Singapore checked all the boxes for Nguyen Huu Duoc, a 24-year-old from Vietnam who enrolled for a Ph.D. in mechatronics at Nanyang Technological University in 2016. The city-state is "more developed than other countries in Southeast Asia," he said. "And it is near my country, so I can go back to visit my parents. They wanted me to come back and visit them a few times a year."

Singaporean student Leo Sylvia Han Yun, meanwhile, opted for the Tokyo Institute of Technology. The 23-year-old, who has a sister who was born deaf, chose to focus on clinical biology in the hope of contributing to stem cell therapy for children. "You get to see the suffering," she said. "Kids don't deserve this kind of thing."

In choosing a destination, she did not want to take chances. "For me personally," she said, "safety is quite a big priority." Cases like the killing of two Indian IT engineers in a Kansas bar in early 2017, or the shooting at YouTube headquarters on April 3, give many students pause. Japan is attracting more international students, like these young women from India at Waseda University in Tokyo. (Photo by Ken Kobayashi)

Data on the movement of students within Asia shows the shift started before Trump became president, with countries such as China and Japan becoming more popular places to study abroad. From 2014 to 2016, the number of students from other Asian countries in Japan rose 36%, to 173,303, while the figure for China rose 18% to 264,976, according to the Center for Strategic and international Studies and the Japanese Ministry of Education.

But the raging immigration debate in the U.S. is only making more students think twice about going there.

The Trump administration has mounted an attack on the H-1B visa program, which allows U.S. companies to employ highly skilled foreign workers. The visas, Trump said last year, "should never, ever be used to replace Americans."

"No one can compete with American workers when they are given a fair and level playing field," the president said. This populist message has been well-received by Trump's base as well as some left-leaning labor unions, even as business groups voice concern about closing the door to international talent. With so much uncertainty over job prospects, why take on the expense of studying stateside, or the burden of hefty student loans?

"In my particular case, I didn't want to take that risk," said Kumar Siddhartha, a 24-year-old Indian graduate student of mechanical engineering at the Tokyo Institute of Technology. Siddhartha is juggling long hours of research, a part-time job as an English teacher, and job interviews in and out of Tokyo. "Japan has big technology, and other countries [in Asia] have the market," he said. "I can make the link."

Untold numbers of Indian students still aspire to careers in Silicon Valley, where they might follow in the footsteps of Google CEO Sundar Pichai or Microsoft CEO Satya Nadella. Some parents mortgage their homes to pay for their children's education in the U.S. But Siddhartha did not want to put that weight on his parents' shoulders. 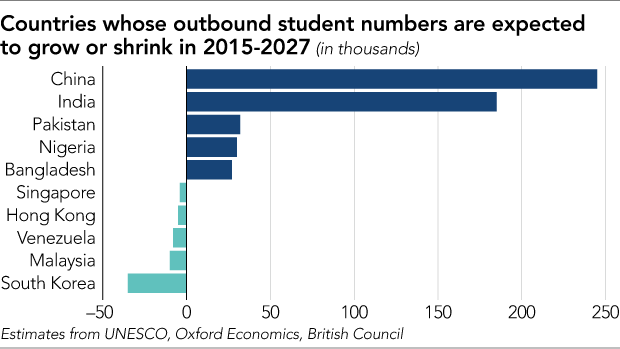 Whether the chief concern is guns, immigration policy or cost, this much is clear: The number of international college students in the U.S. is in decline. For the 2016-2017 academic year, it dropped 3.3% -- the first fall in more than a decade. It is estimated to have fallen another 6.9% in the current academic year, according to data from New York's Institute of International Education, or IIE.

Asian students are surely a key factor, since they make up two-thirds of international enrollment in the U.S. Overall, international students account for about 5% of the 20 million college students in the country.

While students like Siddhartha are still choosing to go abroad -- just not necessarily to the U.S. -- others find appealing educational opportunities within their own countries. "More students are staying in their home countries for higher education and reaping the benefits, often, of affordable education," the British Council said in a report published in February.

"Students face increasing choice as high-quality provision of higher education is more widespread and accessible," the council noted. "As a result, the market share of international students globally is dispersing and diversifying."

The British Council predicts the growth of outbound student traffic to slow to 1.7% per year from 2015 to 2027, down from 5.7% for the 2000 to 2015 period. "The projected slowdown in the global growth of long-term outbound students is in large part attributable to local investment in higher education," the council said.

South Korea is a case in point. The number of South Korean undergraduates in the U.S. dropped 12% for the current academic year, while the number of postgraduate students fell 4.9%, according to a U.S. National Science Foundation survey. This continued a decline seen over the previous five years.

South Korea's shrinking college-age population is partly to blame, but experts also say government and school efforts to win back students from the U.S. are paying off. 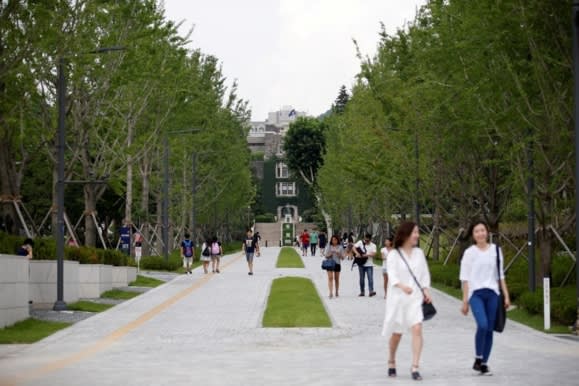 Still, not all Asian countries can afford heavy investment in higher education, which means talented students continue to look elsewhere. India is an example.

The country has an expanding college-age population but lacks the capacity to meet rising demand. While it is home to prestigious engineering schools, including the Indian Institutes of Technology, "these elite institutions are few in number and the demand for seats far outweighs the supply," said Rajika Bhandari, head of research at the IIE. India is the No. 2 source of international students in the U.S., after China.

Indian enrollment in the U.S. for the current academic year dropped 16%, according to the U.S. National Science Foundation, likely reflecting wariness of Trump. But rather than stay home, students tended to opt for destinations like Australia and Canada. The Australian Department of Education and Training logged a 23% jump in the number of Indian university students, to 54,376. "I think significant numbers of Indians will want to study abroad for many years [to come] due to a combination of lack of capacity for good quality education at home, and a desire to get jobs abroad," said Philip Altbach, director for the Center for International Higher Education at Boston College.

As for Chinese students, the pace of the outflow to the U.S. is slowing after the number quintupled over the past decade to exceed 350,000. Some experts see a reversal ahead, as Beijing spends billions of dollars to upgrade top universities and foster "world class" institutions.

The trend in South Korea "offers a window into what we might expect with other groups of students who study in the United States at high rates, such as students from China," said Georgetown's Kim. She predicts a gradual decline in the overall number of Chinese students who cross the oceans to pursue a U.S. education.